Of course, the answer to this question will be different for everyone undertaking such a trip but I thought you might be interested in knowing what my 2800 mile, 40 night RV trip cost. 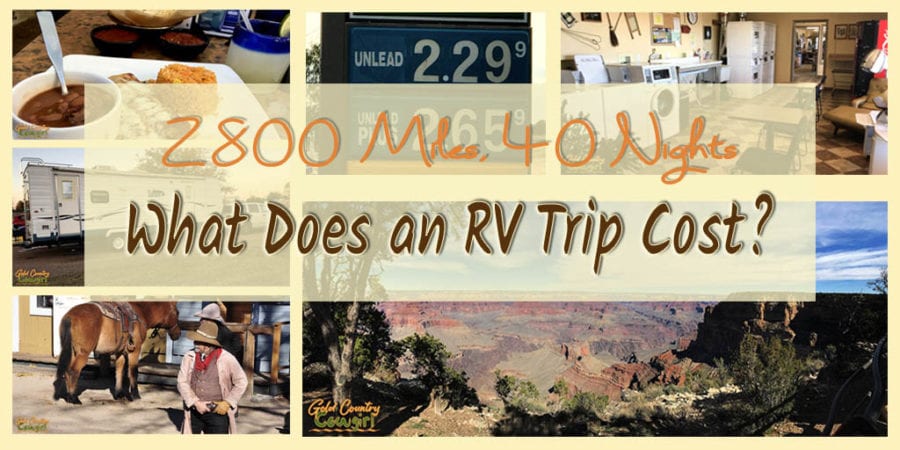 Here’s What My RV Trip Cost

I’m sure it is no surprise to anyone that this was the biggest expense of the trip, especially since many of my miles were through California. I paid almost $5 a gallon in some places! Once I got into Arizona, the cost went down to under $4 a gallon and in Texas under $3 gallon. I was using premium gas while I was hauling because I wanted to help my car out with all the oomph I could. In retrospect, it may not have been necessary but it gave me a little extra sense of well-being at the time. I averaged around 10 miles to the gallon in mountainous areas and around 12.5 on long level stretches.

This actually would have been my largest expense if not for Passport America. I stayed almost exclusively at Passport America parks, saving 50% at each one. Some parks only allow one night at the discounted rate and others perhaps as many as six or seven. One park I stayed at allowed fourteen nights.

There were a couple of towns I wanted to stop at that didn’t have a Passport America park. At those, I received a 10% AAA or Good Sam discount. One park didn’t offer any discounts but was only $20 a night anyway.

For full disclosure, I received four nights free at one park. They had some undesirable people staying in the park that they kicked out. Apparently, those folks decided they needed to take my chairs on the way out. The park staff was mortified, offered me the free nights and replaced my chairs! 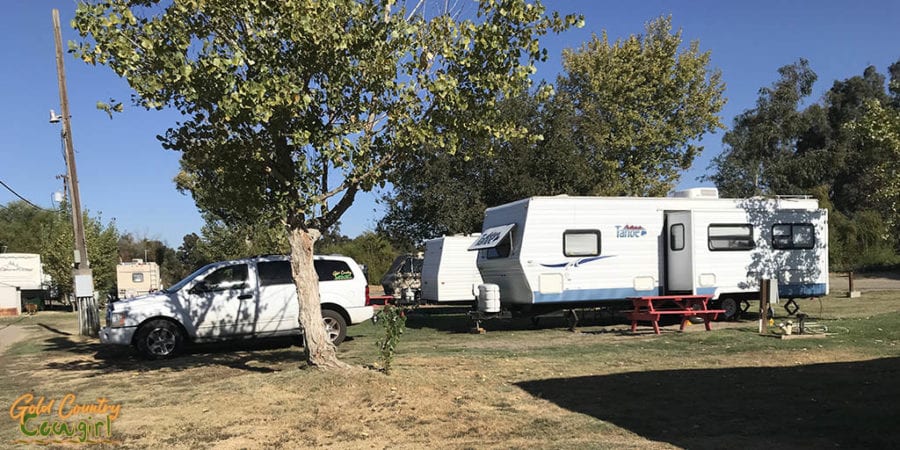 If I had paid full price for the 35 nights I stayed in RV parks, this total would be nearly $1500! Thank you, Passport America and your member parks!

Although boondocking with Harvest Hosts‘ sites is “free,” this is intended to be a mutually beneficial arrangement. That means, you should visit your host and make a purchase. I stayed five nights with four hosts, averaging $25 a night but I had some awesome products and interesting experiences to show for it. 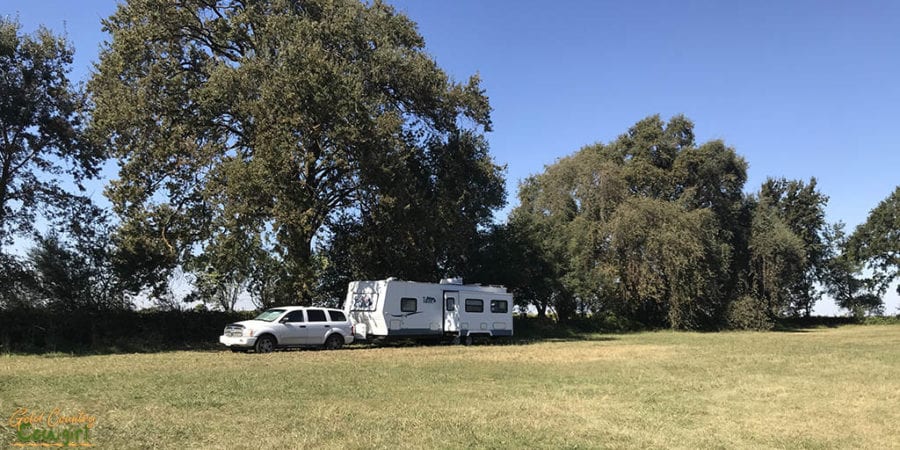 Boondocking at a Harvest Hosts site

I cooked and ate most of my meals in the trailer. I eat pretty simply — mostly just meat and vegetables — and I usually only eat two meals a day. My main vices are seeds and nuts which can get pricey if you can’t find them in bulk. I try to eat keto so I don’t buy any other snack type items which can really add up fast. I even treated myself to shrimp and steak on a few occasions. 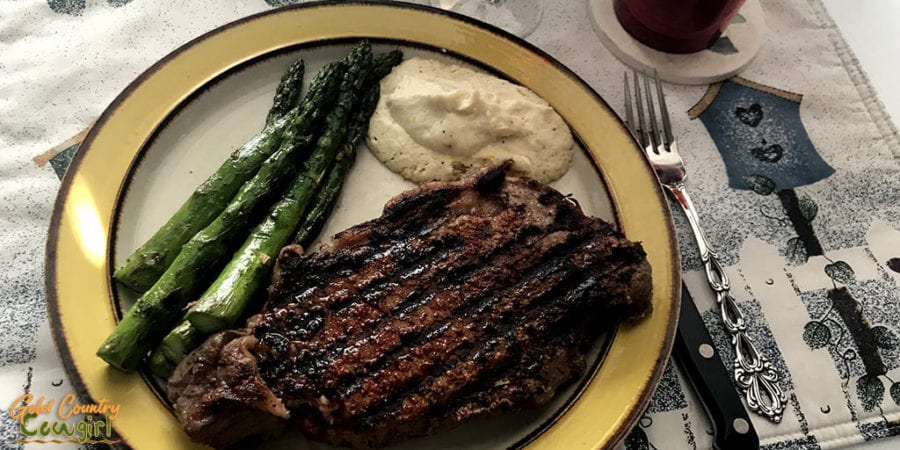 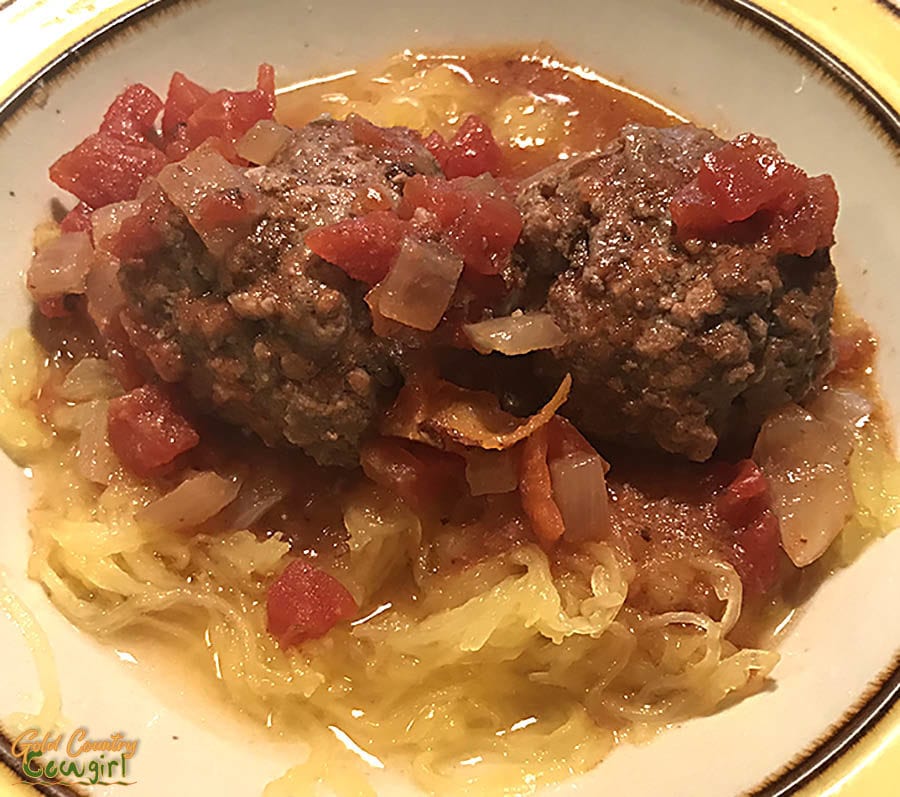 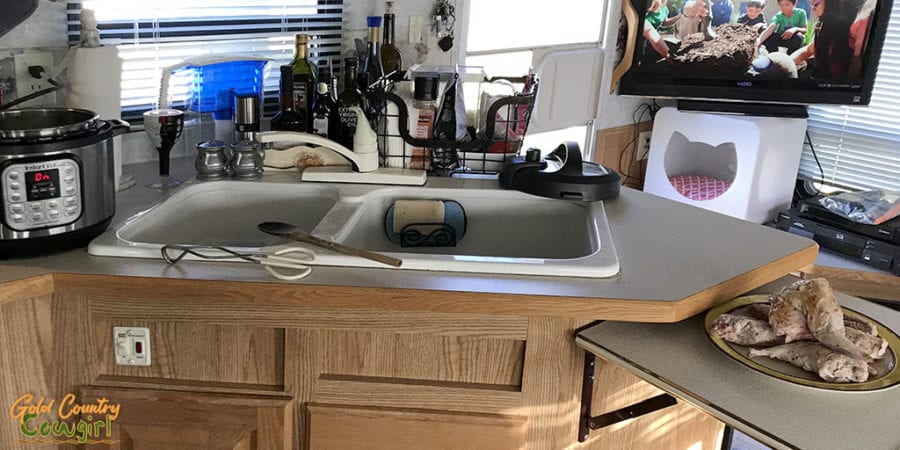 Cooking rabbit in the instant pot

The total grocery cost includes feeding my three cats their homemade raw diet of chicken or pork for the entire trip. I had about a week’s worth of food for them that I took from home as well as a couple of days of food for myself, like the rabbit above. 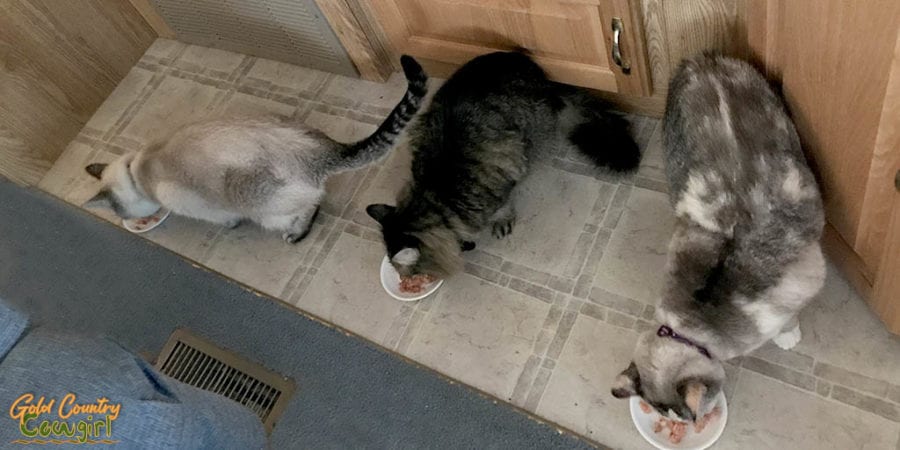 Boy, you can really see here how eating out can effect your budget. I ate only five what I would call “nice meals” out. Some of the leftovers from these meals did make second and even third meals later. The rest of the cost was a little fast food here and there when I stopped for gas and, of course, a few blizzards. I said goodbye to blizzards yesterday. I had my last one before I seriously get back to low carb eating. As you can see from the photos, I wasn’t very good about eating keto when I ate out.

Dairy Queen has been taunting me for more than 2,000 miles! I’ve been wanting a blizzard but I had to have it close to my destination—all that sugar puts me in a near coma. It just never worked out. I thought I was going to get lucky in Williams, Arizona, when there was one right across the street from the RV park. I drove up and it was permanently closed. What a disappointment! So, today it finally worked out in my schedule to pick one up on the way back to the trailer from doing errands. It was so worth blowing my keto way of eating for today. Ice cream is my guilty pleasure. @dairyqueen #texasstopsign #icecream #blizzard #dqblizzard #icecreamandmandms #guiltypleasure #notketofriendly #soworthit #iloveicecream #sugarcoma #middaysnack #rvlife #rvlifestyle #rvliving #travelingtheusa #stoppingforicecream #travelblogger #travelblogging #foodbloggerusa #GoldCountryCowgirl 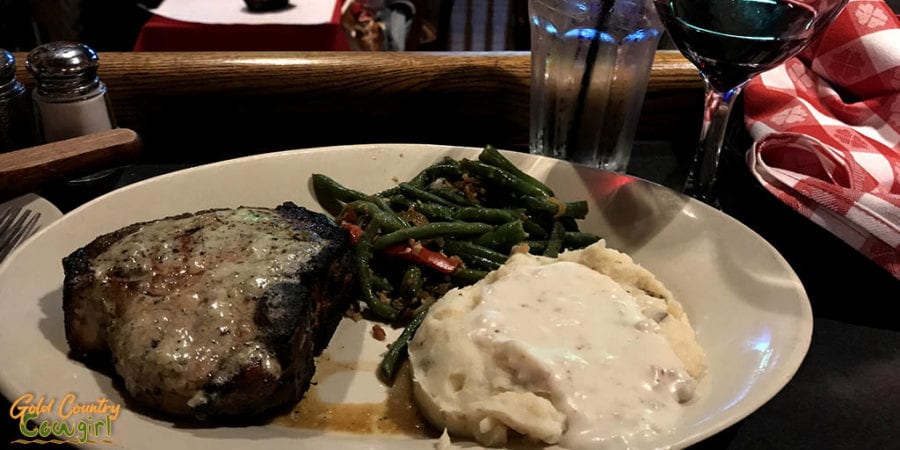 Dinner at Buck Owens Crystal Palace in Bakersfield, CA – $51.60 including tip, wine and entertainment. I got three more meals out of this gigantic pork chop! 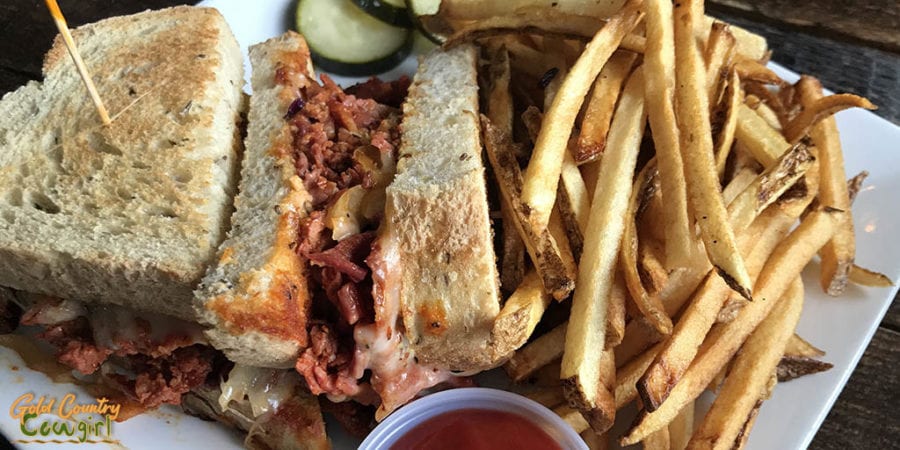 Lunch at Historic Brewing in Williams, AZ – $29.51 including tip and beer. The leftovers made a great deconstructed pastrami sandwich. 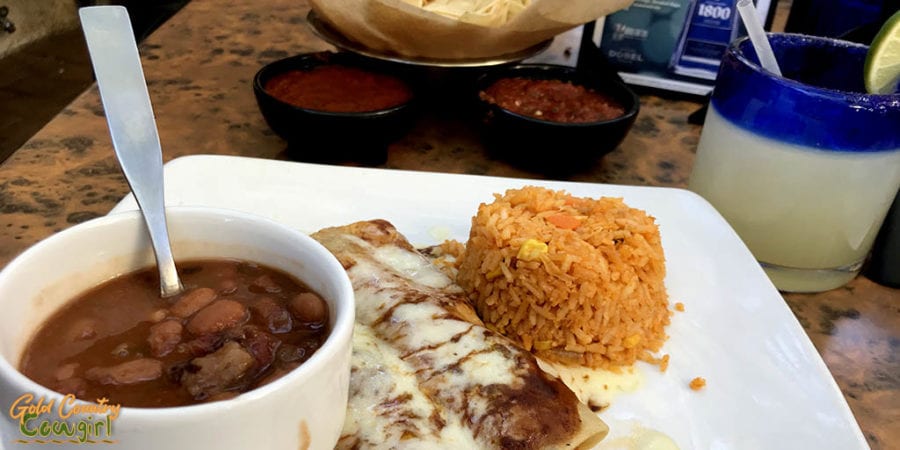 Lunch at Iron Cactus in San Antonio, TX – $26.19 including tip and margarita. No leftovers here even though I couldn’t eat it all. I still had lots of sightseeing to do.

Here’s where I felt like I really splurged but in the overall scheme of things, really isn’t that much. Most of it was for the Grand Canyon Railway and bus tour ($183.99) and sightseeing and parking in San Antonio ($65.54). Most places I went had very low entry fees, I used my NPS pass or they were free.

When I began this journey, there was really only one place I knew I had to stop and that was the Grand Canyon. As far as I could remember, I had never been there. The Grand Canyon is one of the seven natural wonders of the world and the only one in the United States. Photos and videos don’t even begin to do it justice. It’s something you really have to see in person. Lots more about this exciting day for me coming on the blog. @grandcanyonnps #grandcanyon #grandcanyonnps #grandcanyonsouthrim #naturalwonders #naturalwondersoftheworld #amazingnature #arizona #youhavetoseeitinperson #breathtakingviews #rvlife #rvlifestyle #rvtravel #gowhereyouwant #travelblogger #GoldCountryCowgirl

I didn’t spend much on souvenirs. Since I worked so hard at downsizing for the trip I just couldn’t justify buying “stuff.” I bought a couple of t-shirts, which I can always use, and a couple of other small items.

I did laundry three times – I think a total of four loads. 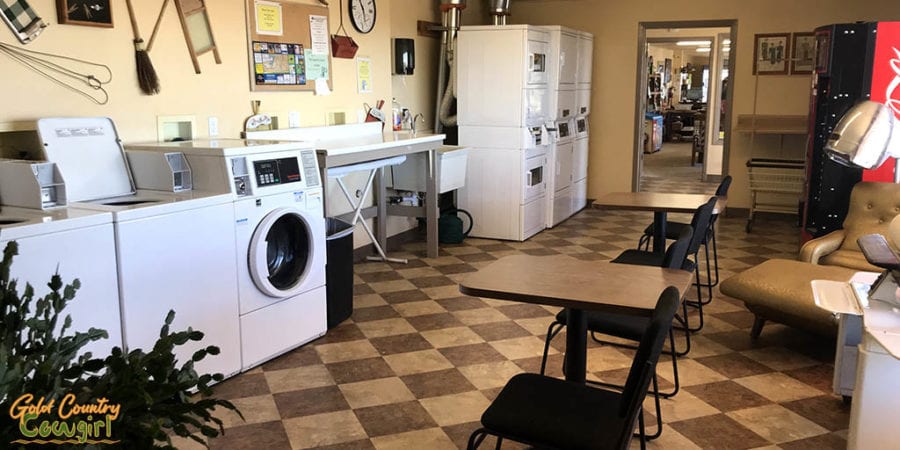 I filled my propane tanks before I left on the trip, adding that to my home propane bill, so I didn’t think at the time to get the amount. I had my tanks filled in Albuquerque to be sure they were topped off but they were only about half empty as I had switched over to the second tank before the first was empty. The temperatures were in the 20s at night and I didn’t want to run out during the night and not have the furnace come on. One tank is still almost full so, basically, I used two 30 pound tanks of propane over the 40 nights.

I knew when I left that my tanks were out of inspection so I decided to have that done when I had them filled. That was $20 of the cost.

For a trip just two days shy of six weeks, I don’t think that is too bad! That is an average of just over $500 a week for my RV trip cost. The other expenses I had during that time were my health insurance, car/RV insurance, cell phone and DirecTV totaling about $500. That brings my monthly expense to just over $2500. This isn’t a whole lot more than it cost me to live in my sticks and bricks house and look at the adventure I had!

I wouldn’t want to spend this amount on a regular basis and, of course, could not afford it now that I have given up my pet sitting business. My future trips will involve lots more boondocking and fewer miles driven. One of my disappointments on this trip was not having enough time in each location.

After 40 nights on the road and a little over 2800 miles, I arrived at my new home base in Texas in time to spend Thanksgiving with my dad. I hope you all were able to spend a day of giving thanks with your loved ones. #texas #southerntexas #riograndevalley #thanksgiving #givingthanks #endofthetrailfornow #newhomebase #familytime❤️ #rvlife #rvlifestyle #rvtravel #travelusa #goexplore #exploreusa #travelblogger #travelblogging #GoldCountryCowgirl 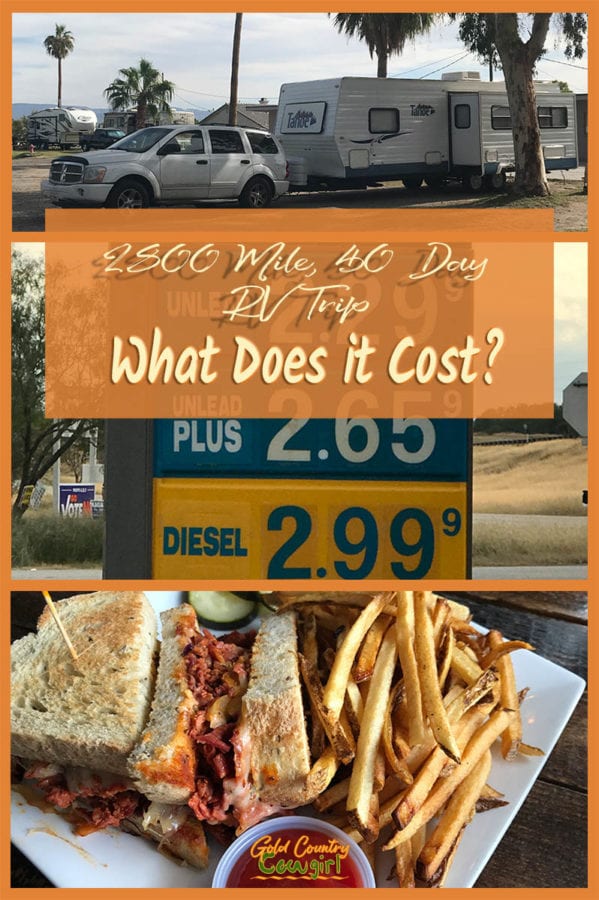 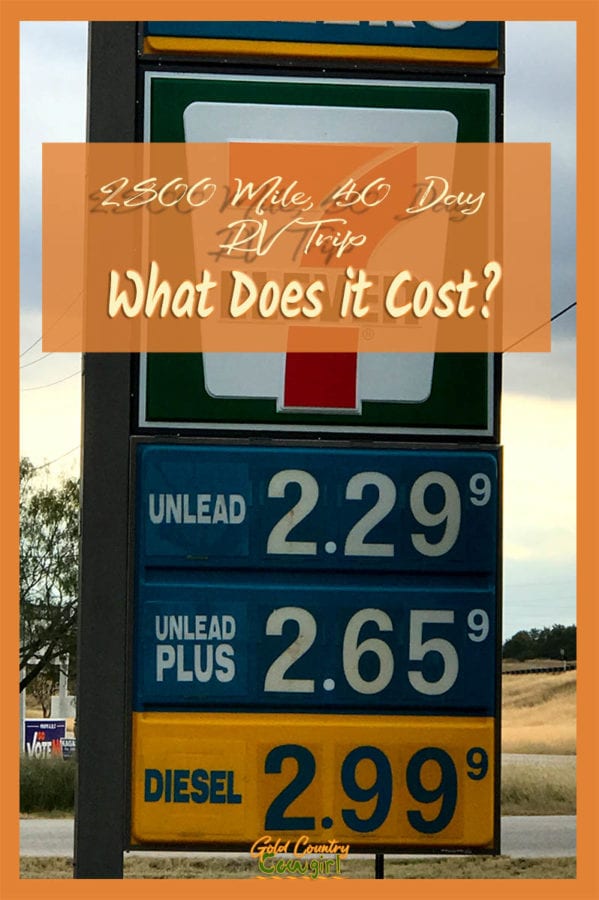 Do you have a budget for your RV trips? Are you a full timer? Any insights for me?