I enjoy each and every one of my Saucy Sisters meetings but when I learned that we were going to be doing sourdough I was kind of excited. I haven’t done sourdough since I was in my 20s.

Hmm, is that a theme? So many things I haven’t done since I was a young woman that I’m starting to reconnect with.

Anyway, as I was saying, I was pretty excited about our sourdough meeting. I first started doing sourdough after a trip to San Francisco and bringing home a San Francisco sourdough starter kit. Like most things I do, I jumped into it with both feet, and started making sourdough bread almost weekly. 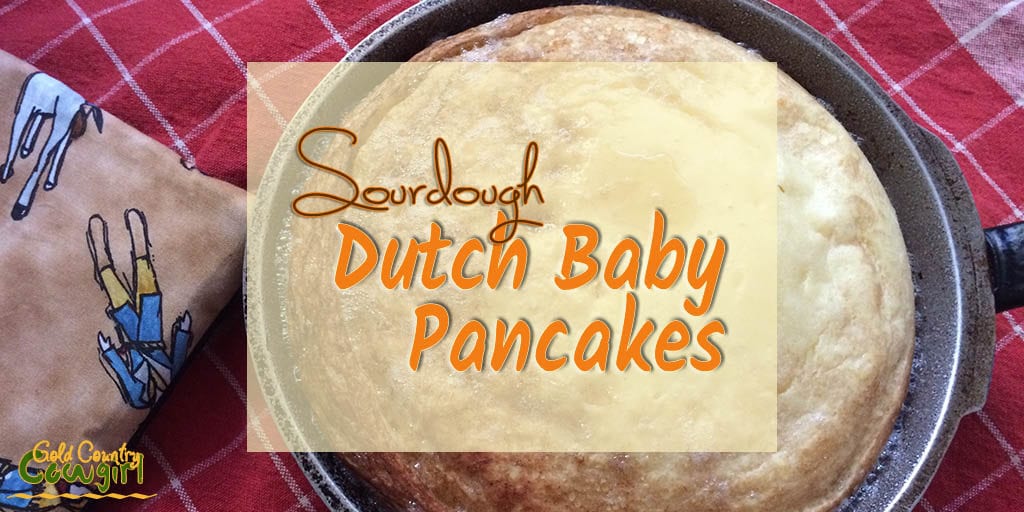 And then I remembered why I quit doing sourdough. In order for your starter to be ready for you to use, your container has to sit out on the counter and you have to feed your starter daily. As someone on another blog said, I’m not interested in feeding it every day, I already have a cat. I love that!

Granted, you can store it in the fridge and only take it out when you want to use it but that’s why I ended up quitting sourdough all those many years ago. It got stuck in the back of the refrigerator and forgotten and the poor thing died.

Should you Make Sourdough Starter from Scratch or a Commercial Starter?

Sourdough is easy to start from scratch, like the Saucy Sisters did, but the Sourdough Home website recommends that if you are new to sourdough that you start with a good commercial starter (not like the one I brought home from San Francisco!). This will give you a chance to learn how good starter should act and how it should look and smell. 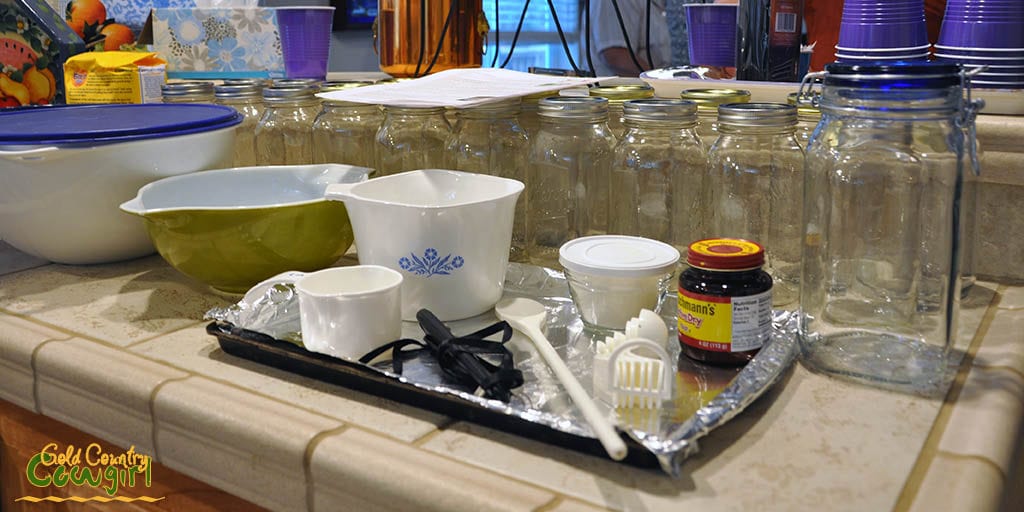 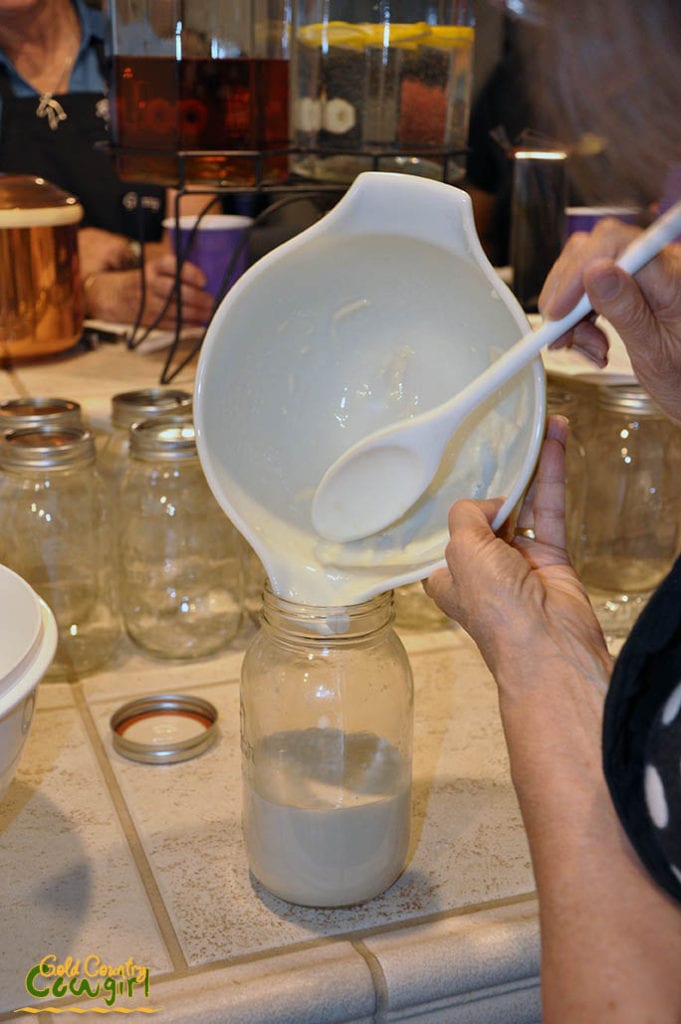 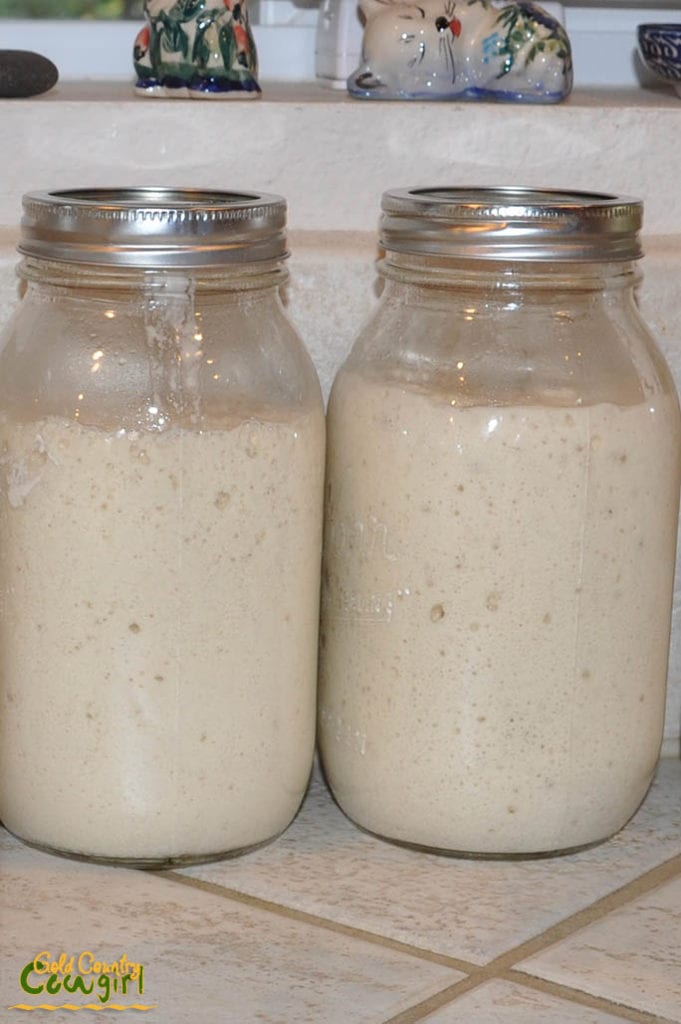 Don’t Throw Out Your Sourdough Starter When You Feed It

Another thing that I find to be a negative about sourdough is that when you feed it, unless you want to end up with gallons of sourdough starter if you don’t bake every day, you have to throw some of it out. Well, it just goes against my grain to waste anything, even a little bit of flour.

Many sourdough recipes require either planning ahead by starting a sponge the night before or lots of rising time. Since there is only me to cook for, I’m not very good at the planning ahead part. Our packet of recipes and instructions that we got at our Saucy Sisters meeting included a recipe for pancakes that use the room temperature starter without any other preparation so I tried them.

The pancakes were excellent, but I’m just not that much of a breakfast food person. I don’t do carbs for breakfast–I need my protein. Even still, I kept looking for other recipes to use my starter in rather than throw it out. When I ran across a recipe for Dutch baby pancakes I knew that was it. Before I moved up to Northern California, a friend and I used to go to our favorite German restaurant, Jagerhaus, almost every weekend and we would share a German or Dutch baby pancake and sausage.

According to legend, Victor Manca of Manca’s restaurant in Seattle, first served small versions of German pancakes. His daughter could not pronounce Deutsch, the German word for German, and instead said Dutch baby. Larger versions of the Dutch babies were eventually served and called big Dutch babies so the name stuck even for the larger size pancake. 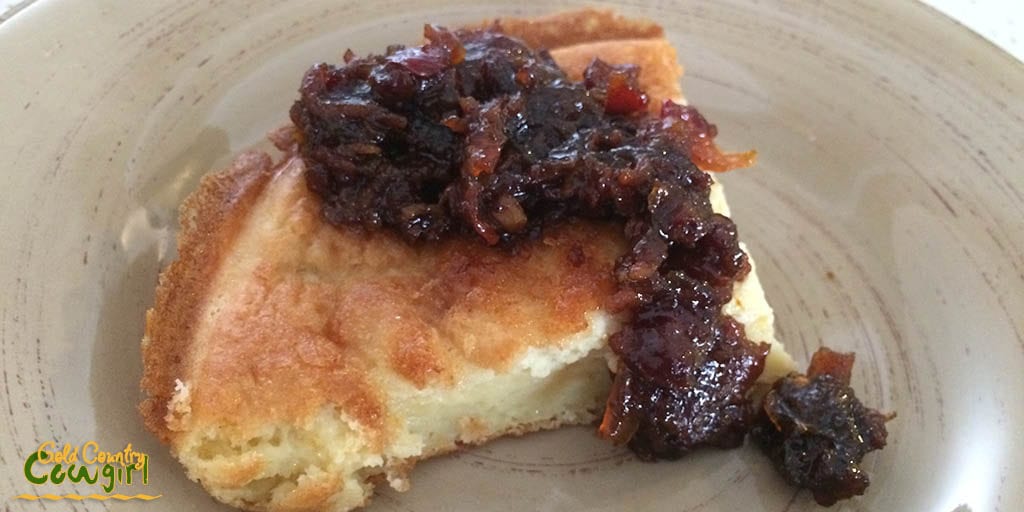 Add some bacon jam and you don’t even have to cook bacon or sausage!

So how are Dutch baby pancakes different from regular pancakes? They have more eggs in the batter and come out moist and custardy. I like that they have extra protein from the additional eggs and milk. 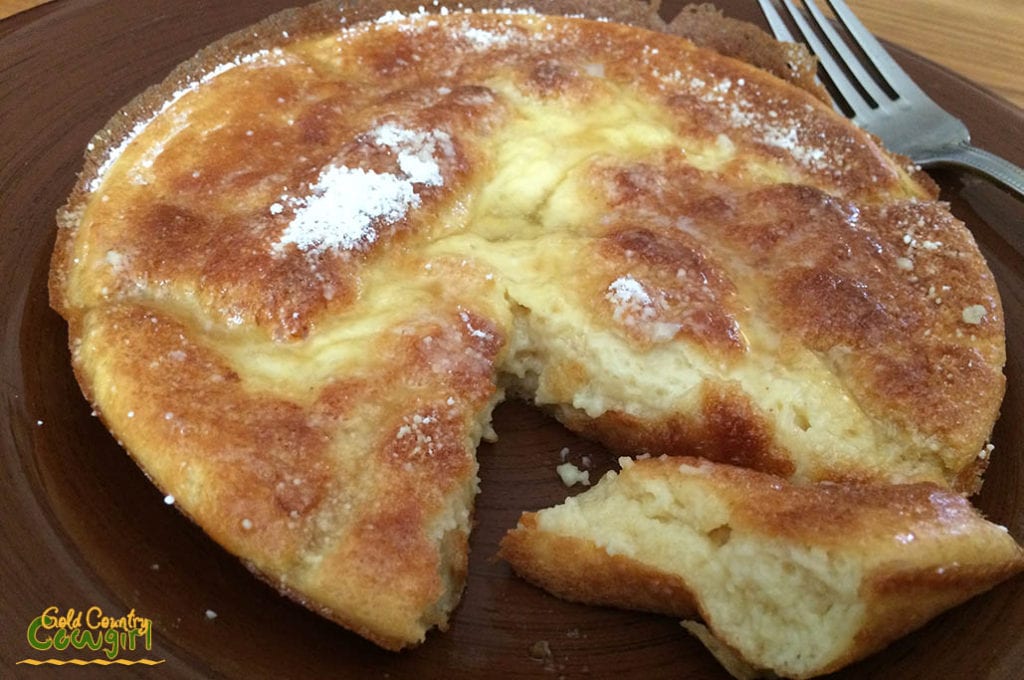 These moist and creamy pancakes are delicious. They are perfect for any meal or even dessert. Click To Tweet

The first recipe I found for Dutch baby pancakes using sourdough starter that I would otherwise throw out, was for a large, 10″ size pancake. I made this recipe and it was delicious but way too large for me. I tried modifying the recipe but the amounts ended up being oddball and hard to remember and a pain to measure. Finally, I ran across a site that gave precise measurements PER EGG which makes it so easy to adjust for the number of people being served. Here’s the basic recipe from Inner Lodge. This site doesn’t seem to have been updated for years but I was glad to find this listing of ingredient ratios.

Will My Dutch Baby Pancake Rise?

My journey with Dutch baby pancakes hasn’t been one of technical success. Dutch babies are supposed to rise high up the sides of the pan and collapse when you remove them from the oven. I have made dozens of Dutch babies trying various modifications and I have yet to see one rise! I’ve read post after post saying they are easy and foolproof only to read comment after comment on the post that folks have the same problem. Here are some things I’ve thought of or read that might be the problem.

None of these things made one bit of difference. Now don’t get me wrong. I haven’t been making all these modifications to make the pancakes taste better because I love them the way they turn out–moist and custardy. I am just determined to figure out why they aren’t rising. The last thing I am going to try is an even larger pan than called for in the recipe. A larger pan means the batter will be shallower. It will cook faster and will not have as custard-like consistency. If I ever get it to rise, I might decide I like it the other way better! And I have to say, many of the photos I see on other blogs look the same as mine. 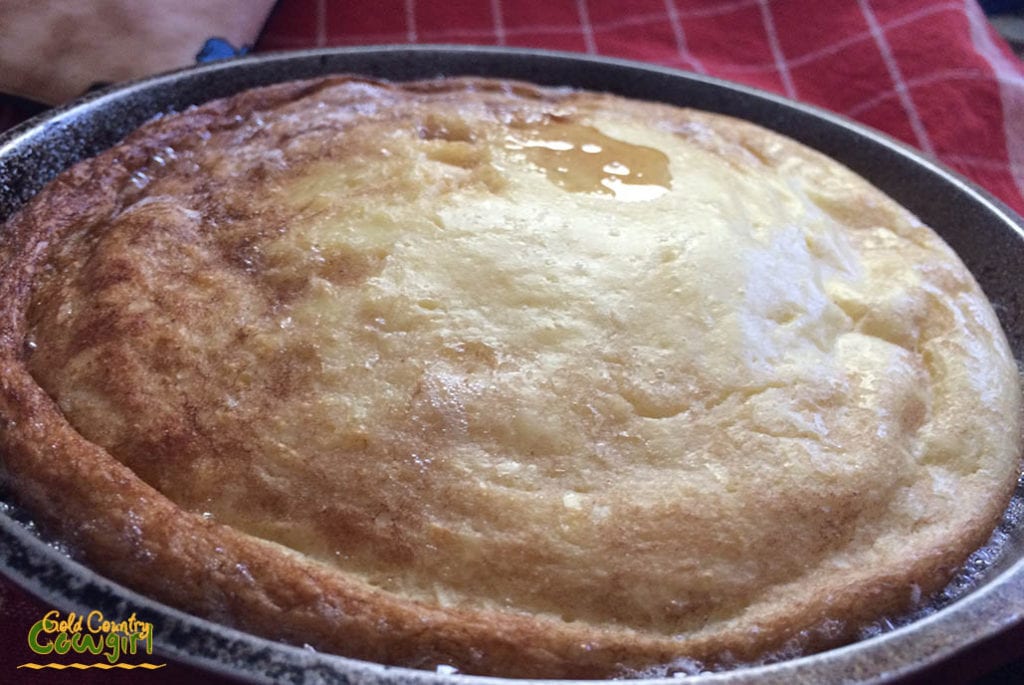 How to Make a Dutch Baby Pancake

When my friend and I had Dutch baby pancakes at Jagerhaus, in addition to plain ones, they had cherry and peach. We tried them all and the cherry was my favorite. I’ve experimented with several different fruits, including pumpkin. The following recipe is one of my favorites that I came up with. 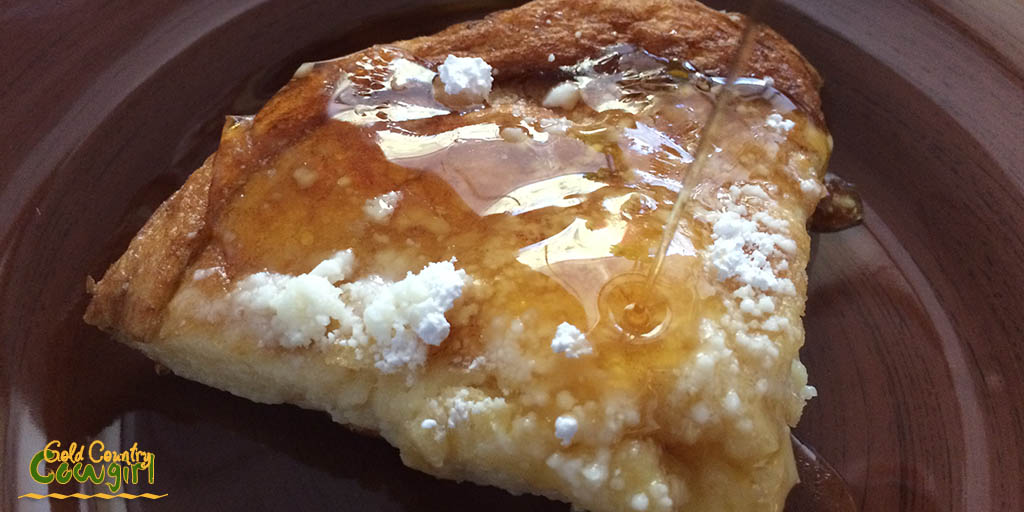 When I first made this version, I was concerned that it might stick in the pan but it didn’t.

Even this two egg size, which is supposed to be a single serving, is too much for me. I usually have half for breakfast and the other half for dessert a day or two later. I heat it gently in the microwave and top with fruit and whipped cream or just whipped cream dusted with powdered sugar and cinnamon like I did for this pumpkin Dutch baby. 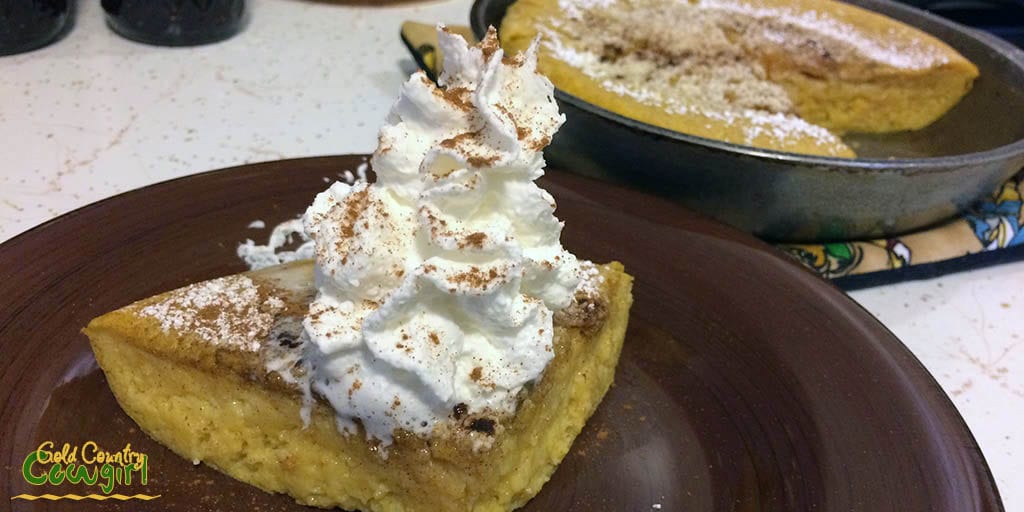 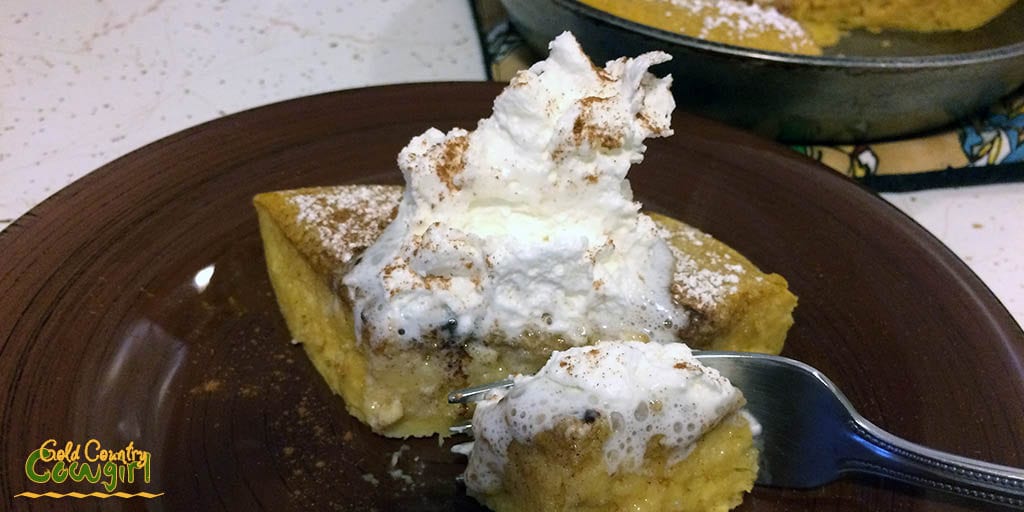 Have you made German or Dutch baby pancakes? Do they rise for you? I’d love to hear about it in the comments. 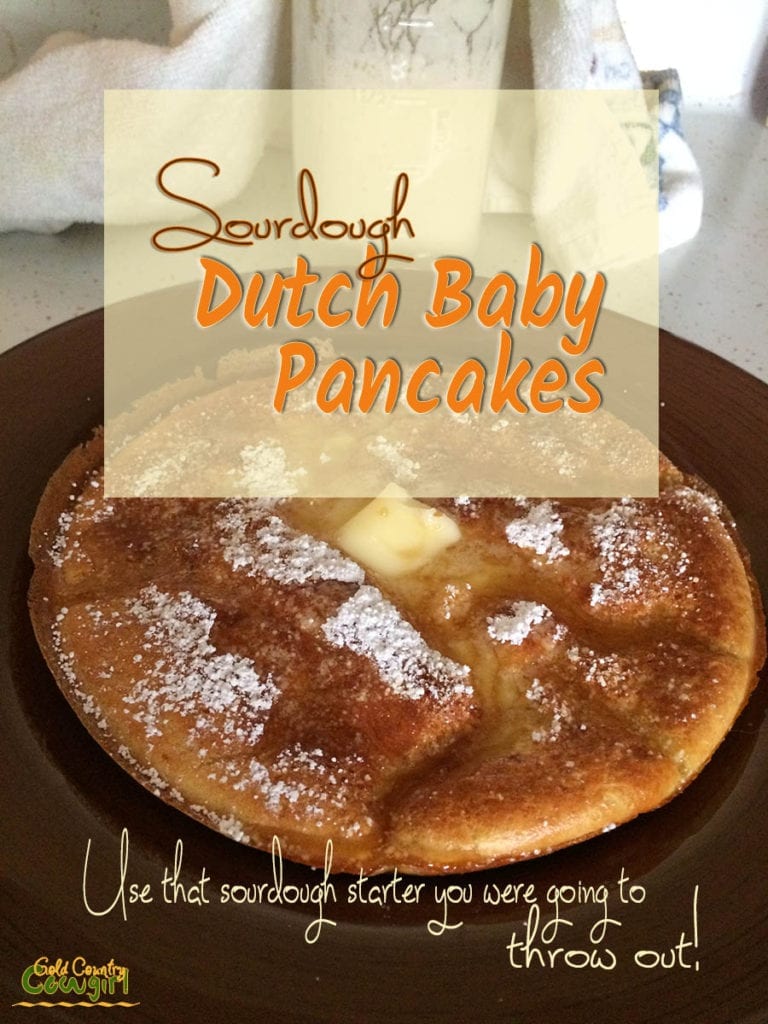 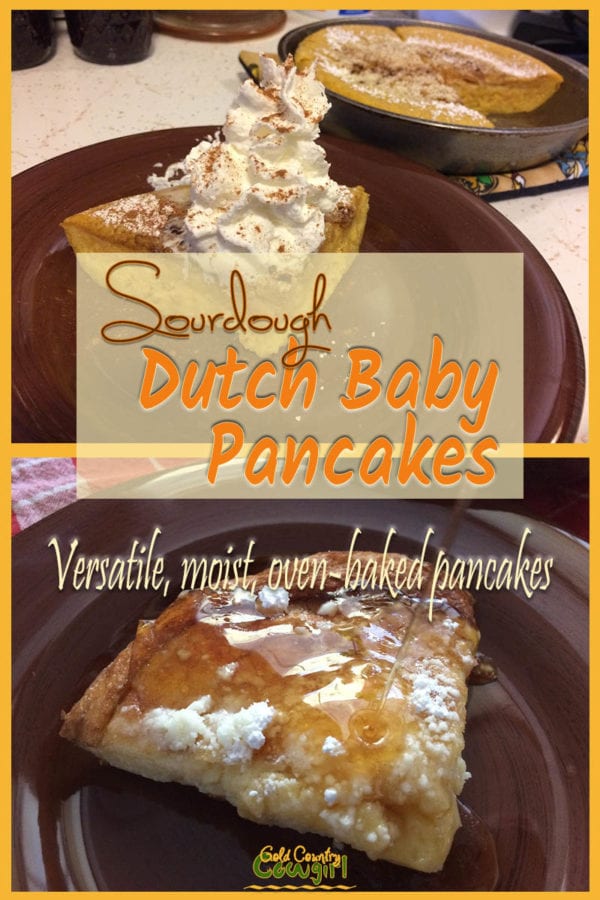