When I began fantasizing about this journey to southern Texas, I planned to leave northern California the third week of September, in time to get to Albuquerque for the Balloon Fiesta. Since that didn’t happen, I had no real plans of what to see or do in Albuquerque other than to try to find some New Mexico wineries. I had no idea that Petroglyph National Monument was so close to where I was staying. 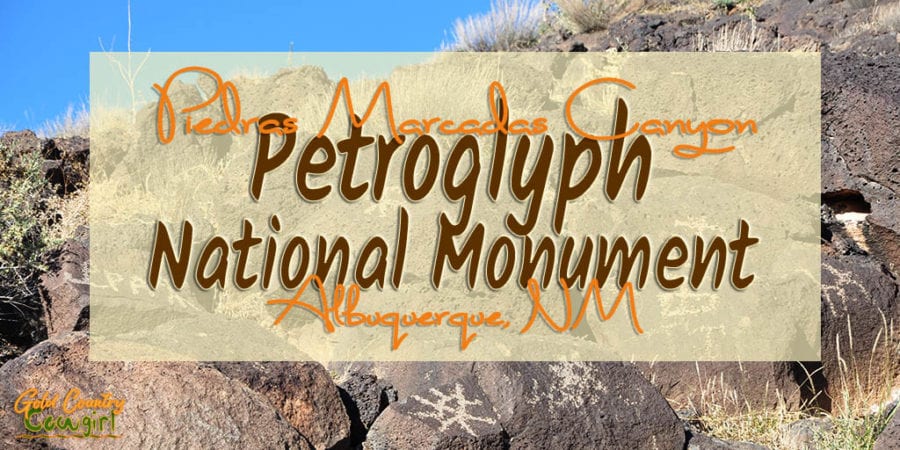 After a little research, I learned that there is a visitor center but no trail access there. Petroglyph National Monument is a day-use park so the visitor center and the four trailhead parking lots are open from 8:30 to 4:30. The trailheads range in distance from one to seven miles from the visitor center. Entrance is free except at Boca Negra Canyon where there is a parking fee of $1 weekdays and $2 on the weekend.

You don’t have to go to the Petroglyph National Monument Visitor Center to hike the trails but I started there since I knew nothing about the area. I watched an awesome video about the petroglyphs and how the area was formed. The helpful staff at the center recommended the northern most trail as it has the most visible petroglyphs so I headed out for Piedras Marcadas Canyon, which means “canyon of marked rocks,” about 6.5 miles from the visitor center. 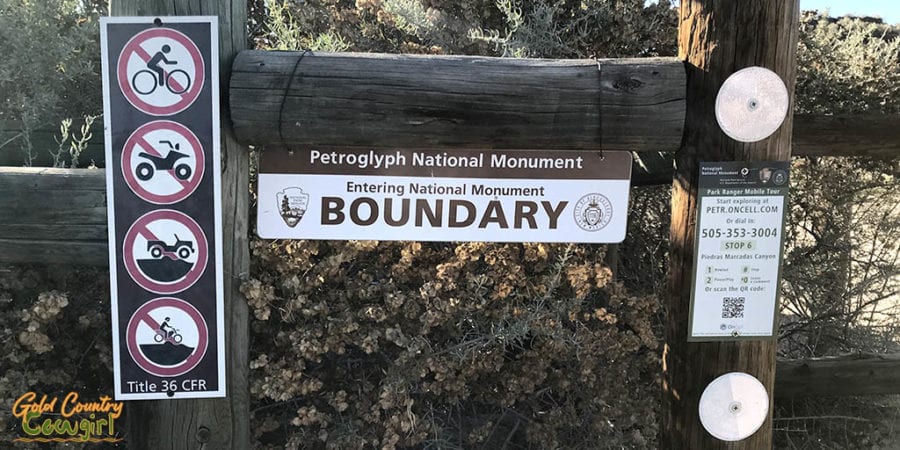 The parking lot for the canyon is behind a gas station at the entrance to a housing development. It seemed a little odd to walk into this area with houses and businesses so close and visible from most of the canyon. Once inside, however, it was easy to get lost in the history and beauty. 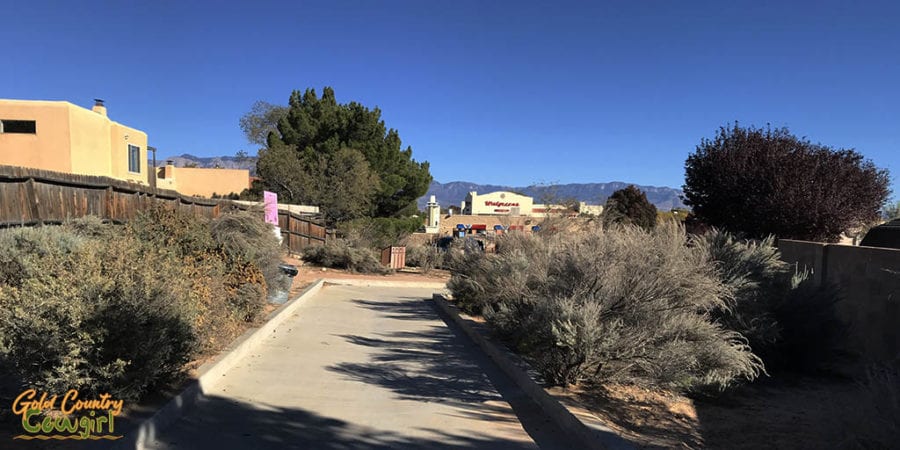 The trail at Piedras Marcadas Canyon is 1.5 miles round trip and takes a little over an hour to walk, depending on how much you stop to observe and photograph more than 400 (of the estimated 5,000 or more) petroglyphs in this canyon. It is an easy, level, sandy trail but has no services, shade or places to sit and is not wheelchair or stroller accessible. Dogs are allowed but you must carry out waste and place it in the trash can at the trailhead. Follow the trail at the base of the escarpment (cliff) to see the petroglyphs. 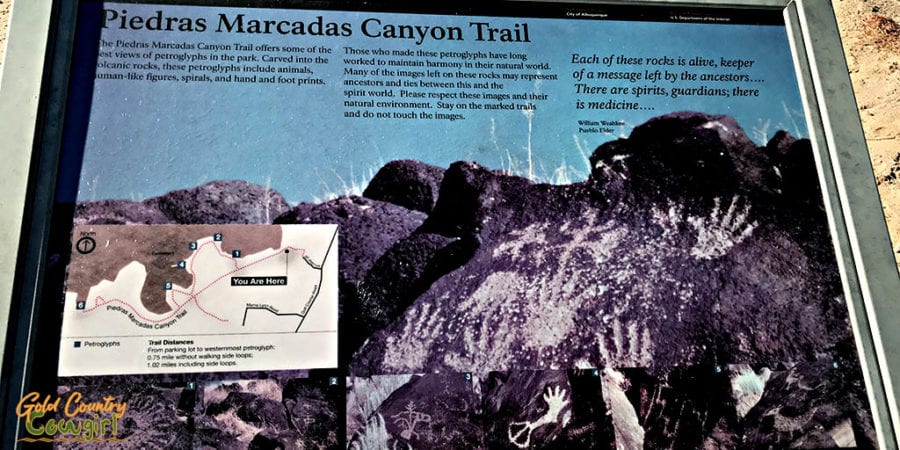 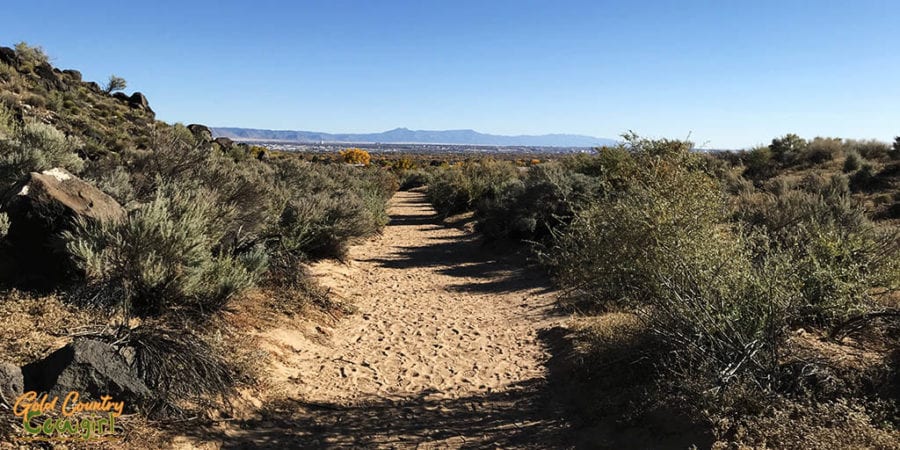 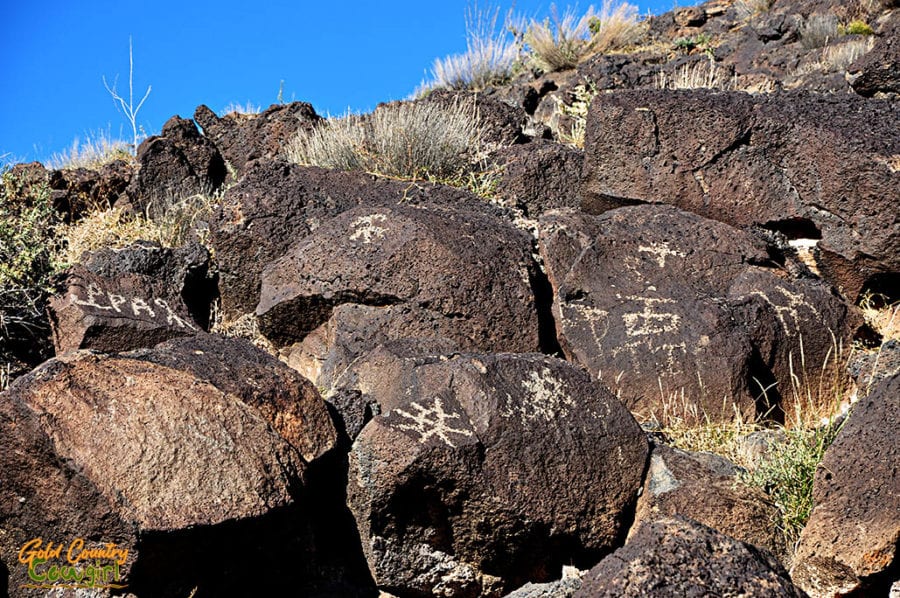 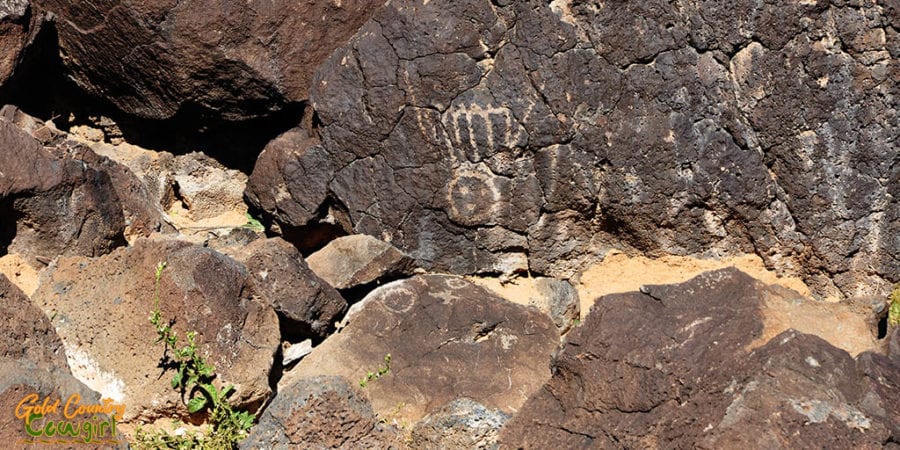 How the Canyon was Formed

So, where did this 17-mile escarpment covered with dark boulders come from? 200,000 years ago, or so, a series of volcanic eruptions sent lava flowing around the hills for four or five miles creating the canyons. Eventually, the Rio Grande eroded away the hills and left the low cliffs made of basalt rock and cooled lava. Because this was the northern most area of the flows, the cliffs here are the lowest in the park. 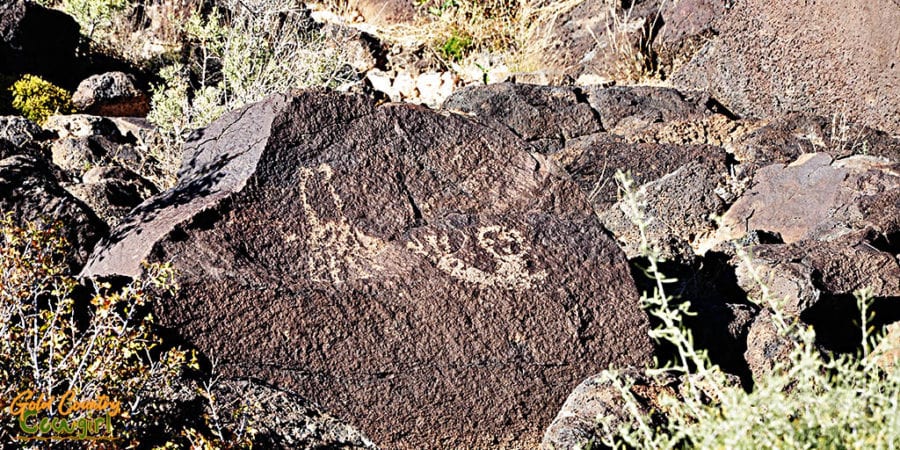 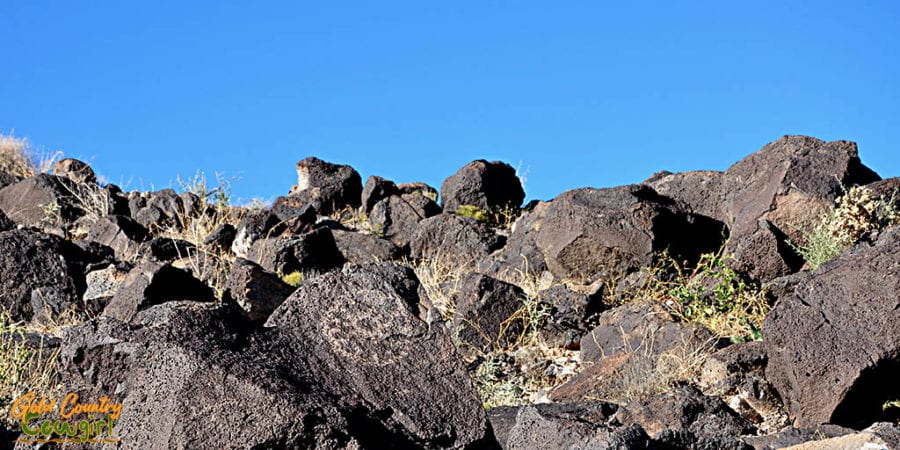 How the Petroglyphs were Made

The rocks are black because they are covered with desert varnish or patina, a very thin coating consisting of clay along with iron and manganese oxides. Native Americans, and later Spanish settlers, created petroglyphs by chipping away this varnish with stone tools to expose the lighter rock below. The majority of the images, which include geometric shapes, animals, human figures, hand and footprints, and more, are on east- or south-facing slopes. 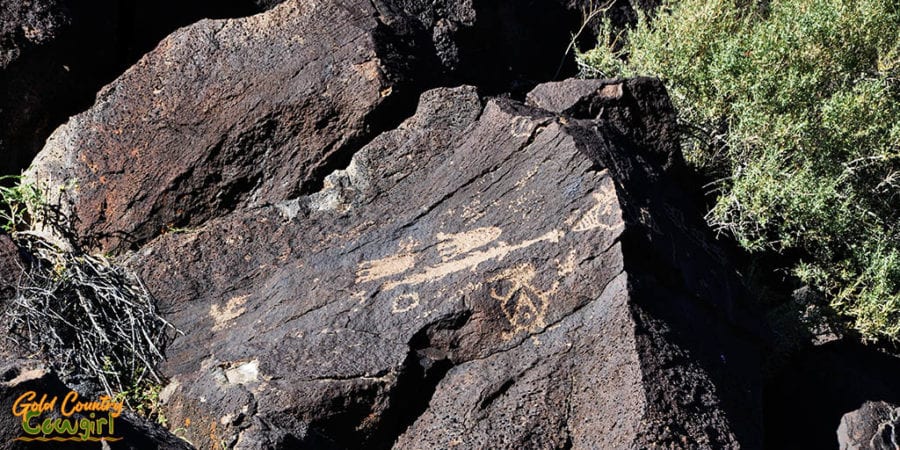 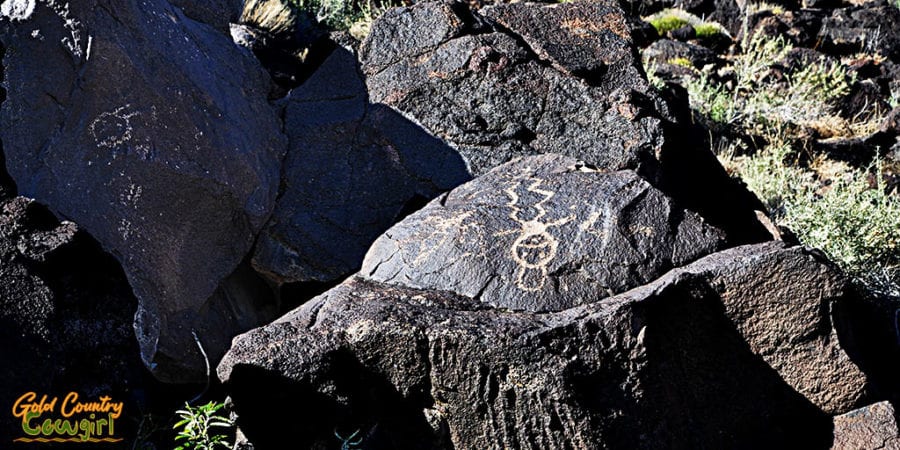 What do the Petroglyphs Mean?

Researchers estimate that 90% of the images in Piedras Marcadas Canyon were created between 400 to 700 years ago by the ancestors of today’s Pueblo people, but some pre-date this period, perhaps reaching as far back as 2000 B.C. I was surprised to learn that, unlike the movies where they read Egyptian hieroglyphs (pictures that represented words) as if they were English, the meanings of these petroglyphs are mostly unknown except to those who made them. There’s lots of speculation as to what they might mean but their deepest meanings are closely guarded by today’s Native people.

There is at least one symbol in New Mexico whose meaning is well known. Check out The Fascinating Story Behind the Zia Sun Symbol on New Mexico’s State Flag. 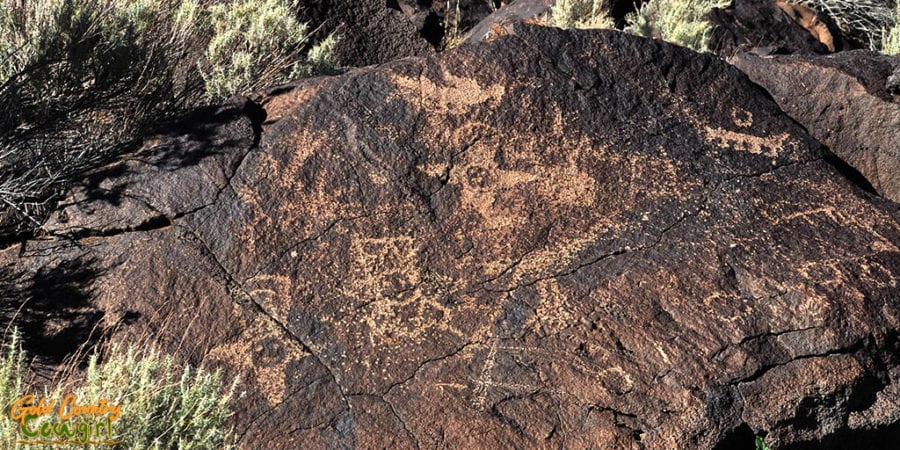 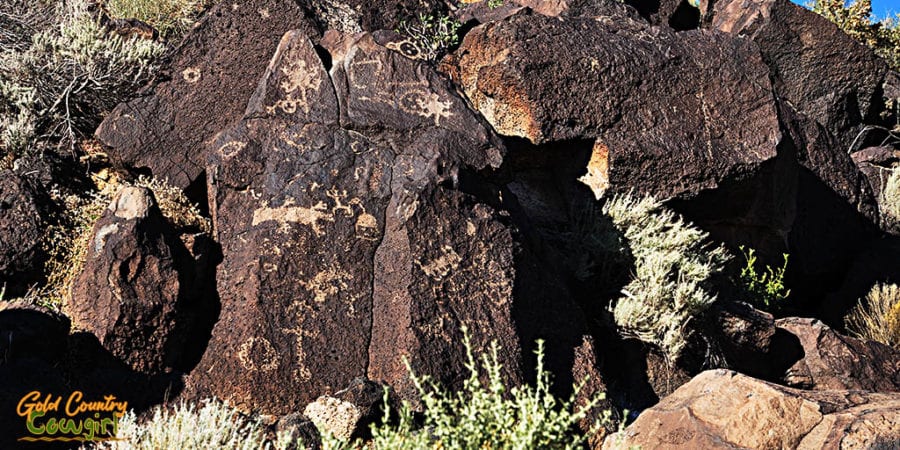 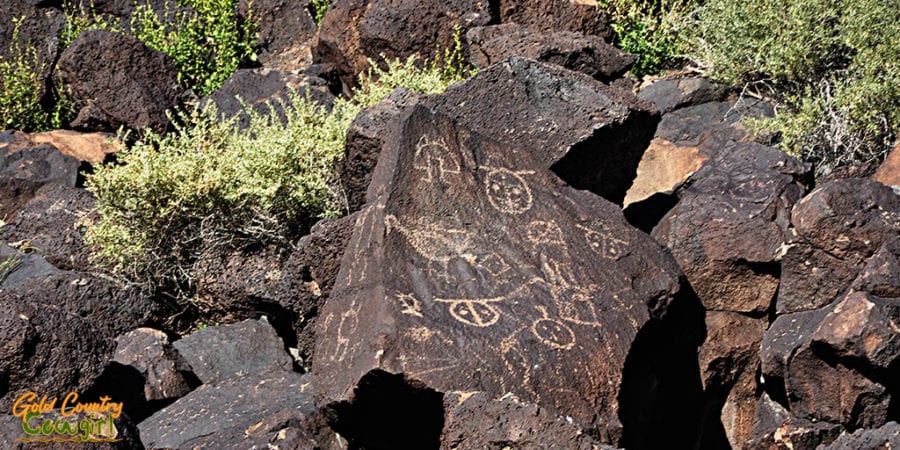 Piedras Marcadas Canyon in Petroglyph National Monument combined my love of and fascination with history, geology and archeology and I thoroughly enjoyed my time there. If I had gotten a little earlier start, I might have visited a second trail, but after my trek through the canyon and taking hundreds of photos and videos, I was ready to look for that New Mexico wine! Read about that next time. 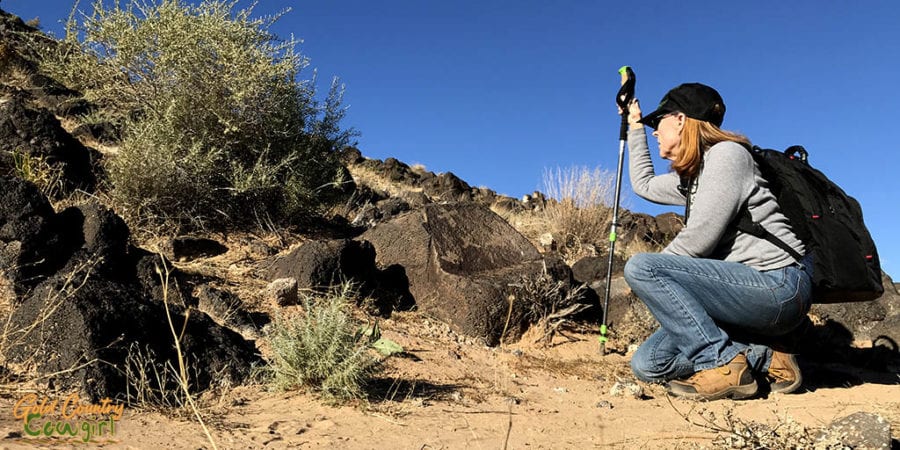 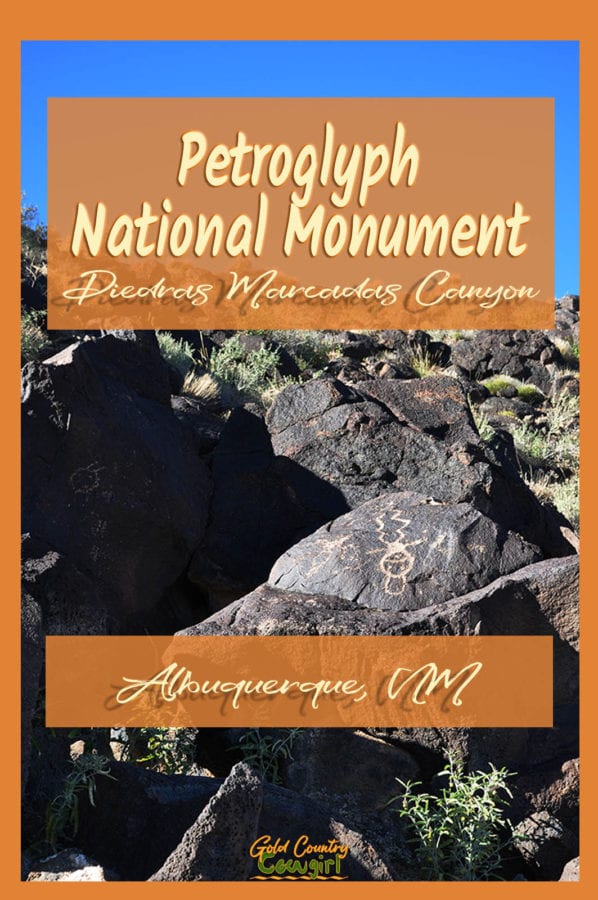 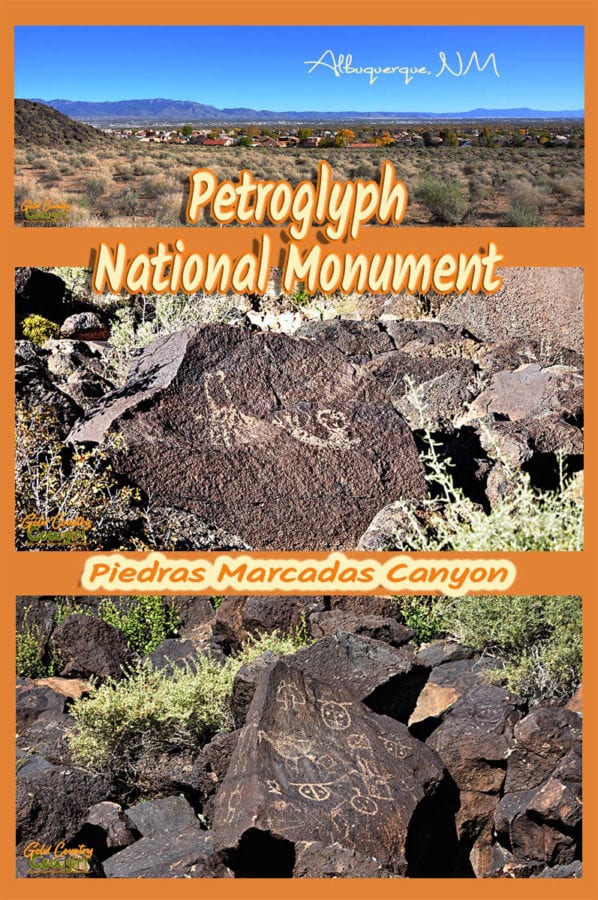