San Antonio Riverwalk Downtown Reach – What to See and Do

I always feel full of joy and peace anywhere near water. For me, that is especially true on the magical San Antonio Riverwalk. It is easy to see why the Riverwalk is the most popular attraction in Texas. People plan entire trips to San Antonio around the Downtown Reach of the Riverwalk! Although there is more to the Riverwalk than Downtown, that’s what we will explore in this post. 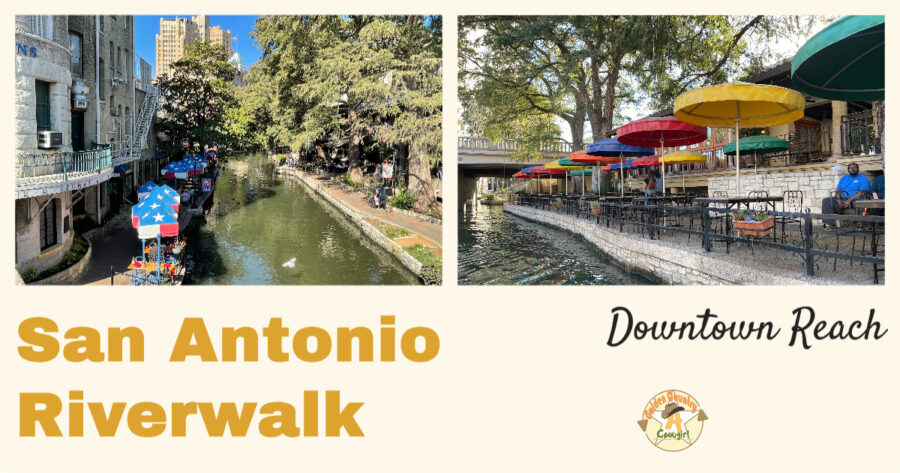 The Riverwalk, also called the River Walk, or in Spanish Paseo del Rio, is a 15-mile long series of lushly landscaped walkways in San Antonio along the San Antonio River. Five miles of those walkways wind their way through what is known as the Downtown Reach.

The Downtown Reach is what most people think of when they hear Riverwalk in San Antonio. It is what I used to think of also because that’s what you always see in tourist promotions. However, there is also the Mission Reach and the Museum Reach, topics for other posts.

The Downtown Reach is what most people think of when they hear Riverwalk in San Antonio. Click To Tweet

What to do on the San Antonio Riverwalk Downtown Reach

In my opinion, the absolute best thing to do on the Riverwalk is to take the river cruise. GoRio Cruises does an awesome job. You will get an overview of the layout of the river and learn so much about its history as well as some San Antonio history. It will whet your appetite for other things you’ll want to explore in more detail.

In my opinion, the absolute best thing to do on the Riverwalk is to take the river cruise. Click To Tweet

Reservations aren’t needed and there are three places along the Riverwalk to purchase tickets. The boats operate from noon to 10pm every day.

In the past, there has also been a river taxi/shuttle but it has not resumed operation since the beginning of the pandemic.

At the end of your cruise on the river, you disembark at the Esquire Tavern, just a few short steps from where you boarded. Here you can get a drink in the oldest bar on the river. Esquire Tavern was built in 1933 to mark the end of Prohibition. Its 100-foot long bar is claimed to be the longest wooden bar in Texas. You can enjoy a cocktail on the balcony with a view of the river. I haven’t eaten there but the food is reported to be quite good.

Have a Meal on the Riverwalk

There are so many restaurants on the Riverwalk, all with amazing ambience, that you just can’t visit without enjoying a meal there. On my last trip there, I made a special trip back from exploring downtown around the Alamo to have dinner. No matter what you are in the mood for or what your budget is, you’ll find something that fits your wants and needs.

Tex-Mex (is it Tex-Mex or Mexican?) is a very popular cuisine on the river. You’ve probably seen pictures of the brightly colored umbrellas at Casa Rio, which is the oldest restaurant on the river. On my first visit to the Riverwalk, I ate at Iron Cactus, which is, I would call, upscale Tex-Mex and was delicious. There are several other Tex-Mex restaurants on the river.

If Tex-Mex is not your thing, no worries. There is pretty much every other cuisine, including Italian, French, German, steakhouses, seafood, Asian fusion, British pubs, delis, pizza, casual American fare and probably more. If I’ve forgotten anything, I’m sure you get the idea. There’s anything you could possibly want all within a short walk.

I’ve read that many restaurants have dinner cruises on the river, something I would love to do. I believe they are still operating for private groups but the community dining cruises have not resumed since the start of the pandemic. Therefore, I may have to wait a while for this! It will definitely be on my list for a future visit to the San Antonio Riverwalk Downtown Reach. 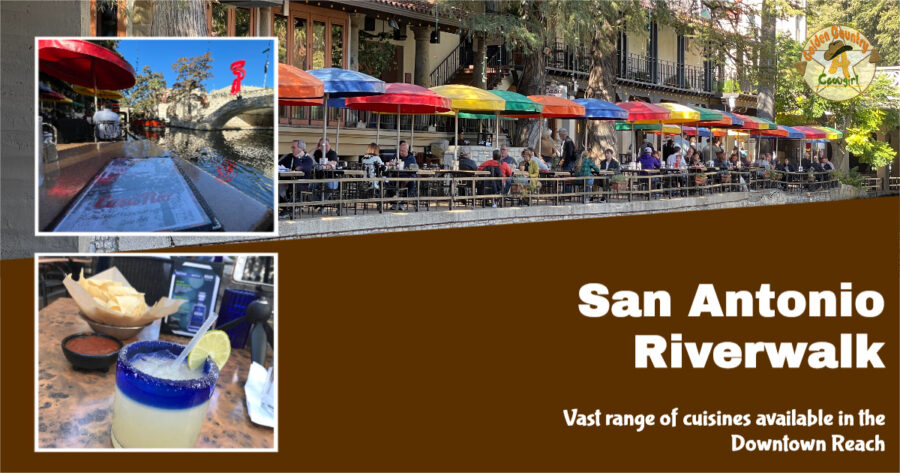 Relax and People Watch on the Riverwalk

People watching in the city’s largest urban park can be quite fascinating. With more than 14 million visitors a year, there is always something interesting to see. If people watching is not your thing, just sit and relax while you admire the gorgeous, lush landscaping and listen to the birds. 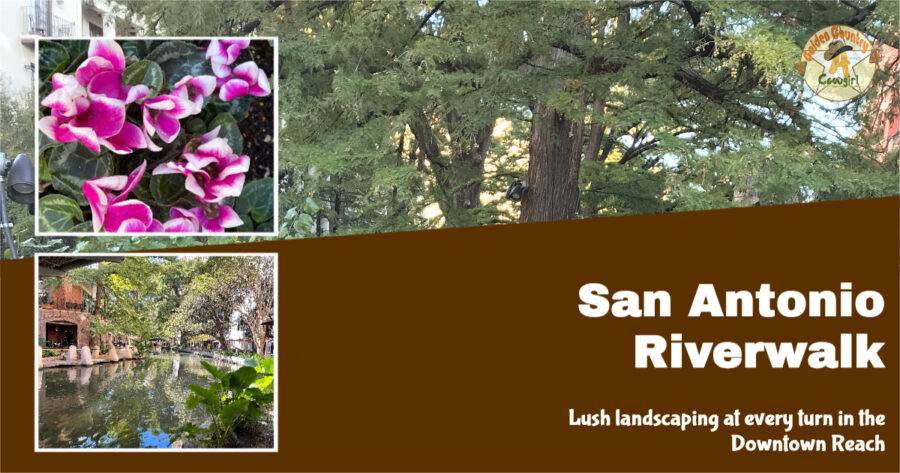 Shopping opportunities abound at both Shops at the Rivercenter (mall) as well as small shops and boutiques. You can find anything from designer goods to handcrafted items at La Villita Historic Arts Village.

Get Married on the Riverwalk!

Yes, you can get married on the Riverwalk. I’ve seen a couple of ceremonies taking place as I passed by on the river cruise. Marriage Island is heart-shaped and said to bring good luck to those taking their vows there. It is a unique place for a small, intimate ceremony. 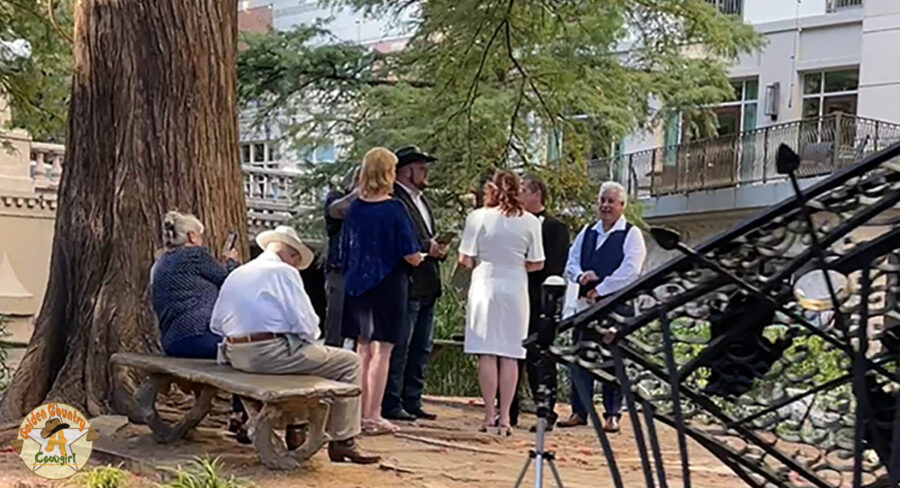 Even after two visits to the amazing Riverwalk, the river after dark is something I still want to experience. How can pictures, as beautiful as they might be, do the magic of all the lights reflecting off the river at night justice? I’m sure the Riverwalk has a totally different vibe after dark.

If you are in San Antonio during the holiday season, the Riverwalk is all decked out it millions of lights. It looks spectacular in photos.

The Riverwalk is an urban park and is free to enter. It is one level below street level and accessible by stairs and elevators. Entry into the Downtown Reach is open 24 hours and you can walk along it any time, day or night. Most of the restaurants close around 10 pm and the bars at 2am.

Entry into the Downtown Reach is open 24 hours and you can walk along it any time, day or night. Click To Tweet

The Riverwalk has an open container policy. Watching people leave a walk-up bar and walk around with their drink totally took me by surprise on my first visit.

There are many bridges crossing over the river so you can easily get to businesses on either side.

There are no railings along the water so be mindful when you or children are near the edge.

If you are visiting during the day, the hop-on hop-off bus is the most convenient way to get around. The bus stops running at 5:30 so if you plan to be on the Riverwalk after that, you will need to find parking nearby. 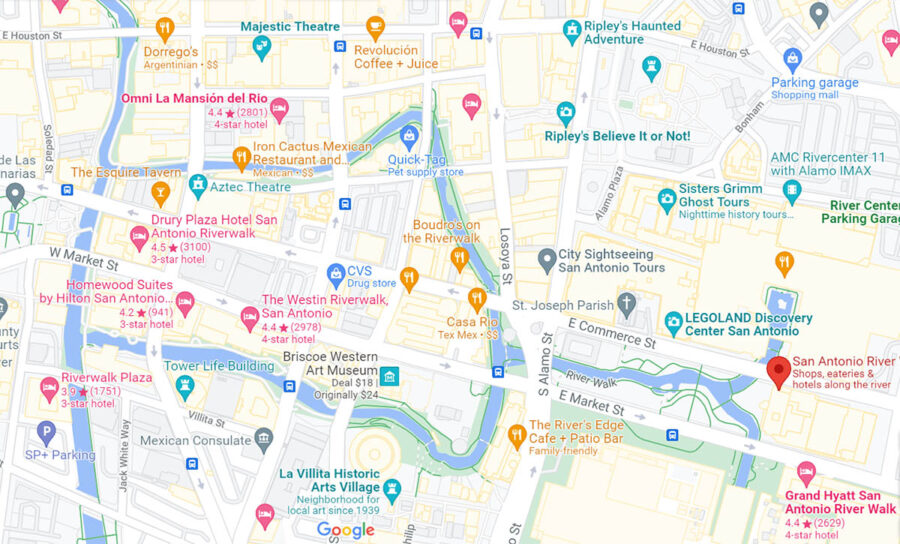 Parking is a little pricey in San Antonio ($20-$25 for the day average) but there are quite a few lots near the Riverwalk. Some have better reviews than others so you might want to research them in advance. 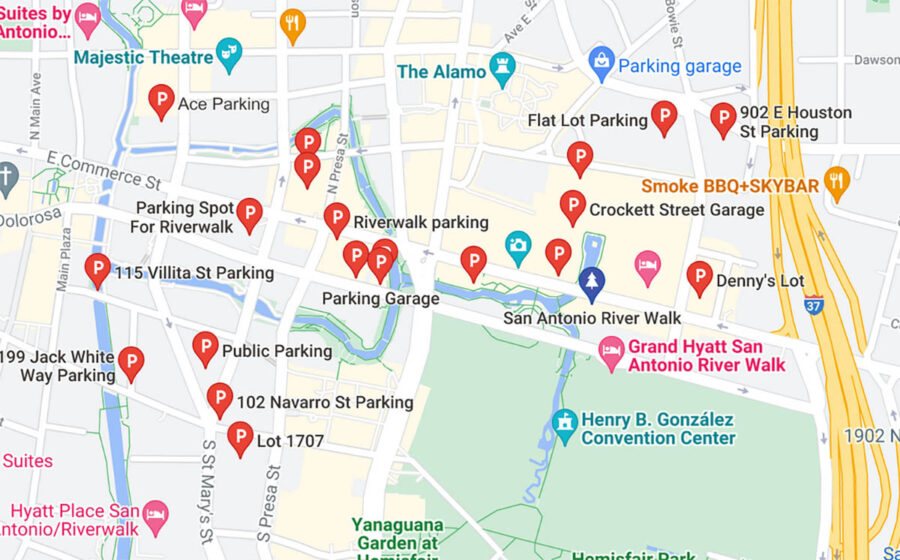 My Final Thoughts on the San Antonio Riverwalk Downtown Reach

San Antonio is one of my favorite places and I can’t recommend it enough. I’m not a fan of big cities but there is so much to see and do there that I can overlook the traffic and sometimes a lot of people. There’s history, art, museums, theater, delicious food, shopping, amazing views, natural wonders and so much more to explore.

The San Antonio Riverwalk, especially the Downtown Reach, is a must visit. It's a delight for all the senses. Click To Tweet

The San Antonio Riverwalk, especially the Downtown Reach, is a must visit. It includes most of those things all in one spot! It’s a delight for all the senses. 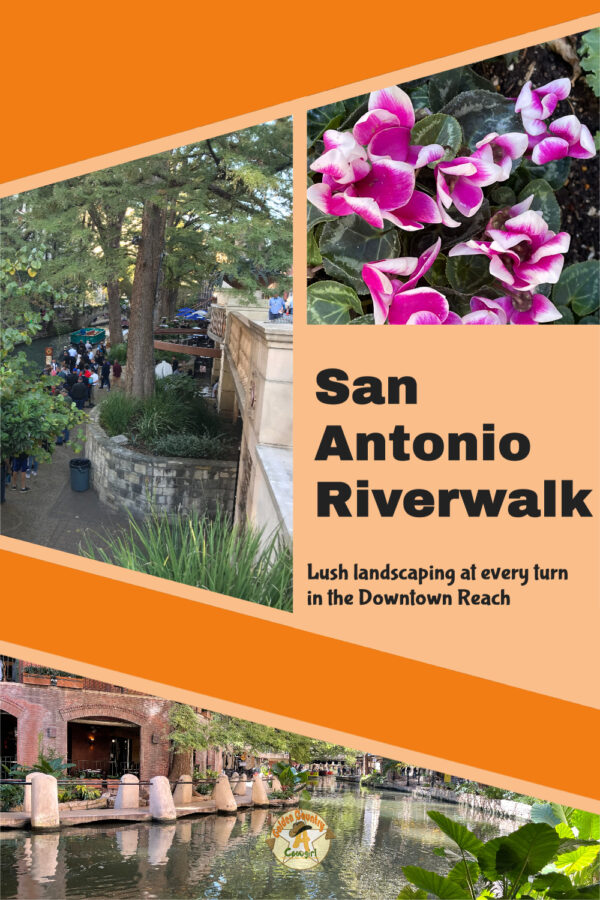 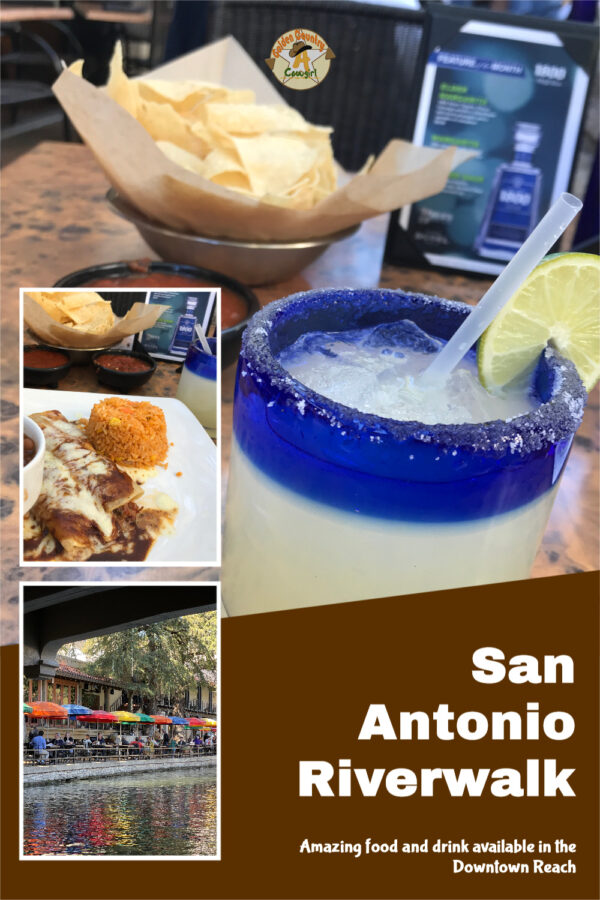 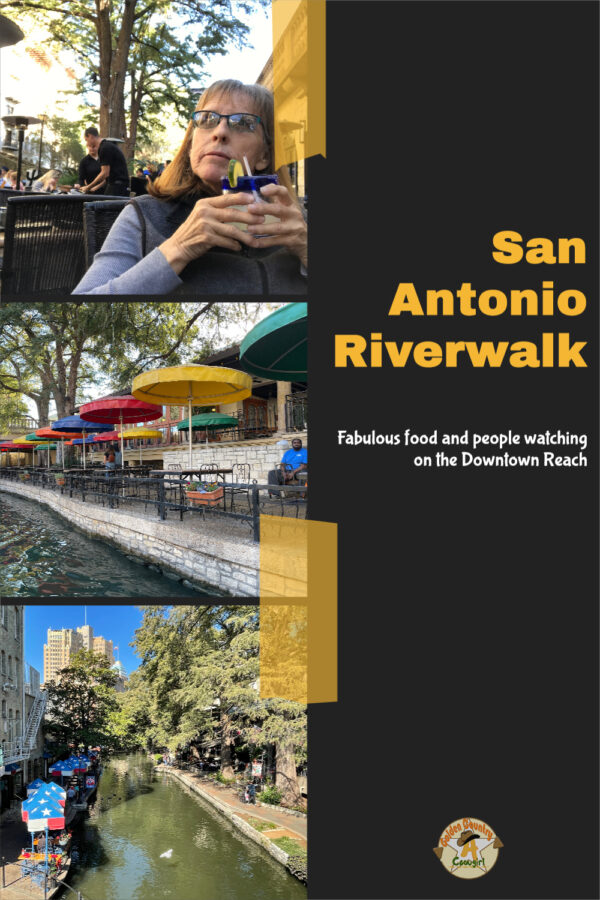 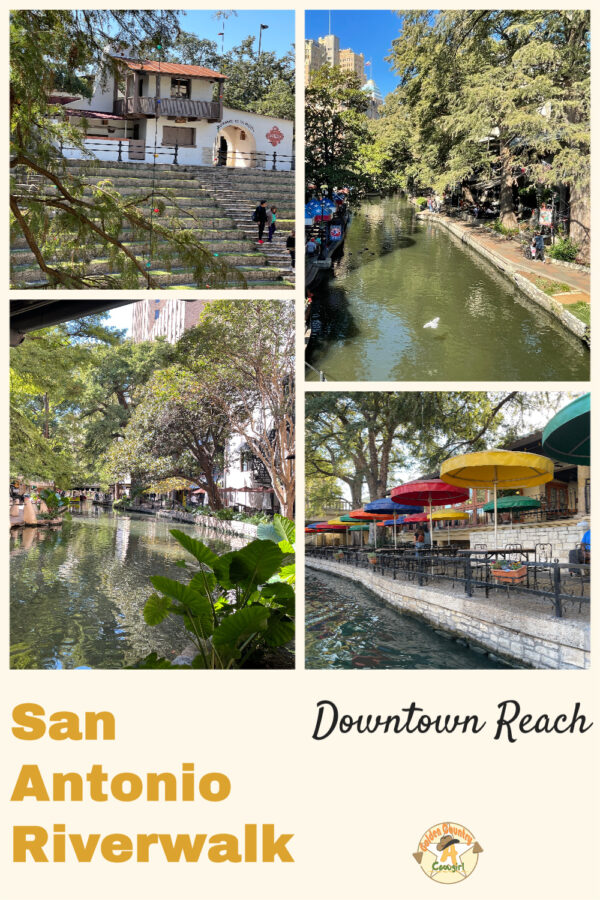 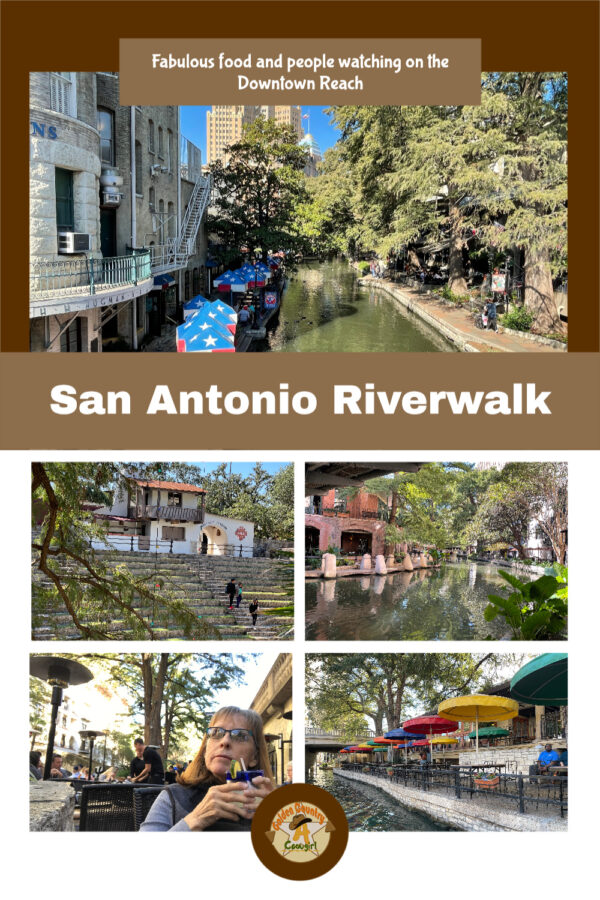