Casa Rondeña Winery – I Finally Get Some New Mexico Wine

Although I had cases of amazing Gold Country wine in my wine fridge when I was getting ready to leave northern California, I didn’t bring much with me. I shipped a couple of cases and gave the rest away. Turns out, that was a bit of a mistake. My plan was to stop at wineries along the way and buy wine to drink as I traveled. That worked for the first week or two when I stopped in Lodi and Paso Robles. After that, discovering new wineries and wine remained an elusive longing.

Once I left Paso Robles, wineries were either not located near my route or closed. Such was the case with a winery in Arizona. I had planned to boondock at Stetson Winery in Kingman but I forgot to call on Sunday and they were closed when I arrived on Monday. They are available by appointment but I couldn’t get through to them so I ended up at Desert Diamond Distillery instead. This was a fun, unexpected stop and I’ll have more about them in another post.

It was fun to take a break from wine and learn about another type of fermented beverage at Desert Diamond Distillery in Kingman. They have been making award-winning rum here for nine years and are the oldest craft distillery in Arizona. You can take a tour, do a tasting and even buy a cocktail. Owners John and Debbie are wonderful hosts. @desertdiamonddistillery #notwinetasting #rumdistillery #craftdistillery #desertdiamonddistillery #cocktails? #tourandtasting #kingman #kingmanaz #rumandvodka #travelblogger #travelusa #GoldCountryCowgirl

I spent several more days traveling across Arizona visiting the Grand Canyon and Petrified Forest National Park but had no luck finding a winery. Most of the wineries in Arizona are south of Sedona and south of Tucson and I just didn’t have time for a detour to the Sedona area. I did find a tasting room in Williams but it was closed when I was there so I decided to have lunch at Historic Brewing and learn about their beer.

I don’t drink beer very often, but while I was in Williams, Arizona, I decided to have lunch at Historic Brewing Company. They make 16 beers, including this delicious Pie Hole Porter. For lunch, I had a pastrami sandwich that I’d been craving for a few days. The meat is house brined and smoked and the sauerkraut is house made. They make pretty much everything here in-house. @historicbrewingwilliams #historicbrewing #craftbeer #porter #pieholeporter #beerwithlunch #pastramisandwich #housemade #rvlife #rvlifestyle #travelingusa #ontheroad #travelblogger #travelblogging #GoldCountryCowgirl

So, on to New Mexico where the search continued. I stayed four nights in Albuquerque – one more night than planned because there was fraudulent activity on my credit card and I had to wait for the bank to overnight a new one. I was sure I would find wineries here but it wasn’t that easy. Finally, I came across one that sounded interesting and was fairly nearby. I planned my day so that I could end up there after visiting Petroglyph National Monument.

When I asked Casa Rondeña Winery tasting room manager, Jesse Gallagher, about the history of New Mexico wine, I was surprised to learn that the first grapes were planted along the Rio Grande, south of present day Socorro, in 1629, making New Mexico America’s first wine country. These vines were smuggled from Spain by Franciscan monks to produce wine for ceremonies and sacraments. By the late 1800s, New Mexico was producing nearly a million gallons annually, twice what it produces today. Floods and prohibition had devastating effects on wine production and by the time prohibition was repealed, California and New York far out-produced New Mexico.There are currently over 50 wineries and tasting rooms in New Mexico.

(Click on picture to read the details about the wines)

Casa Rondeña Winery vintner John Calvin and his two sons planted their first vines in 1990. The winery was established in 1995, the tasting room opened in 1997 and various other additions were made over the years as production increased. In 2010, Mr. & Mrs. Calvin moved out of the house they built on the property and turned it into the 1629 Club, a private, members only club.

John Calvin is dedicated to making New Mexico’s best red wines and has won medals at competitions from California to New York. The Meritage Red, which they were out of when I was there, has received 11 gold and double-gold awards over the last three years.

The winery is open daily from noon to 7 pm. Tastings are $10 and they sell wine by the glass as well. They have cheese boards, spreads, crackers and chocolates available for purchase. You are welcome to enjoy these along with a glass of wine in front of the fire or outside on the patio. The architecture is stunning and the beautiful grounds are oh so relaxing.

Casa Rondeña Winery has been chosen “Best Winery” seven years in a row by Albuquerque the Magazine readers. Between the gorgeous setting and the delicious wine it was easy to see why. I thoroughly enjoyed all their wines so it was tough to decide what to purchase. After re-visiting a couple, I decided to go with the 2014 1629 since that is their signature wine. It is a blend of Tempranillo, Syrah, and Cabernet Sauvignon and has a lovely spiciness that I’m partial to in a wine. 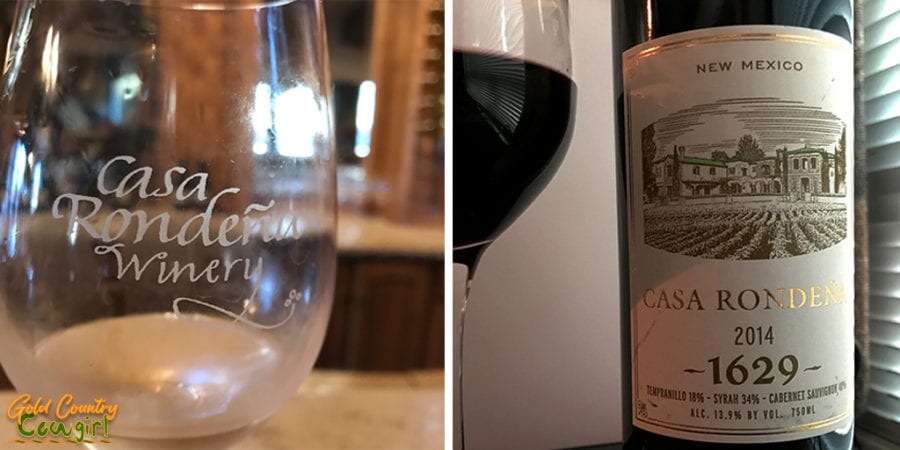 I was there on a Tuesday afternoon so it was pretty quiet. There were only a few other people in the tasting room and I struck up a conversation with two women, Christy and Sue, who are club members. Turns out, they are also fellow RVrs! They are members of Sisters on the Fly, an RV group for women, that I checked into a while back but I wasn’t traveling yet so I didn’t join. I was glad to get a reminder about this group.

The three of us finished our tasting then enjoyed a glass of wine and great conversation in front of the inviting fire. I loved the vibe at this winery as well as the wine and, if I lived in the area, I would definitely become a club member.