If you love caves and caverns as much as I do, then Natural Bridge Caverns should definitely be on your list of things to see in San Antonio. When I lived in Northern California, I visited Mercer Caverns in Calaveras County and Black Chasm Cavern in Amador County. Neither of these caverns prepared me for the breathtaking enormity of Natural Bridge Caverns. 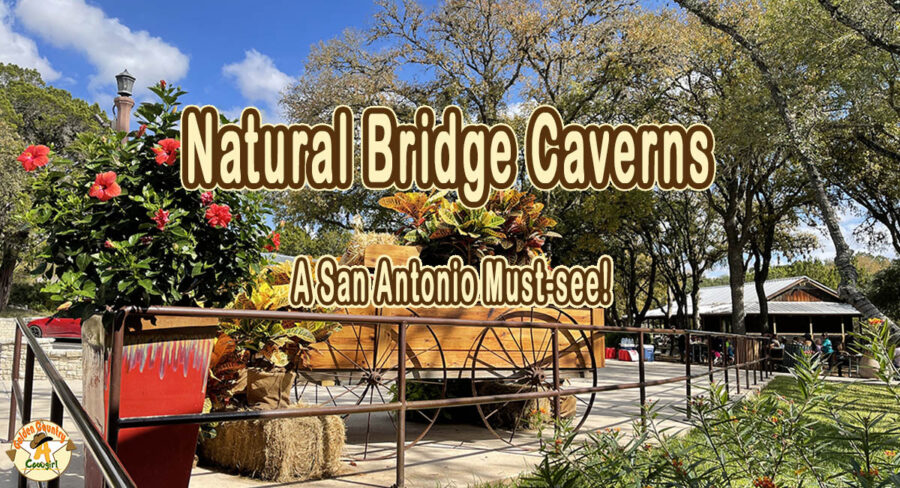 You might wonder how the world-famous Carlsbad Caverns compares to these large caves. It too holds a “largest” title. The Big Room is 8.2 acres (3.3 hectares)– the largest, readily accessible cave chamber in North America and the 31st largest in the world.

You might also be wondering what the difference is between a cave and a cavern. A cavern is a type of cave which is usually deeper and larger than a cave. In addition, it may have a series of chambers and smaller caves joined by passageways.

Natural Bridge Caverns, a U.S. National Natural Landmark, may not be the largest or longest cavern in the world or even the US, but it is the largest in Texas! Additionally, in my opinion, it is quite spectacular.

Natural Bridge Caverns, a U.S. National Natural Landmark, may not be the largest or longest cavern in the world or even the US, but it is the largest in Texas! Click To Tweet 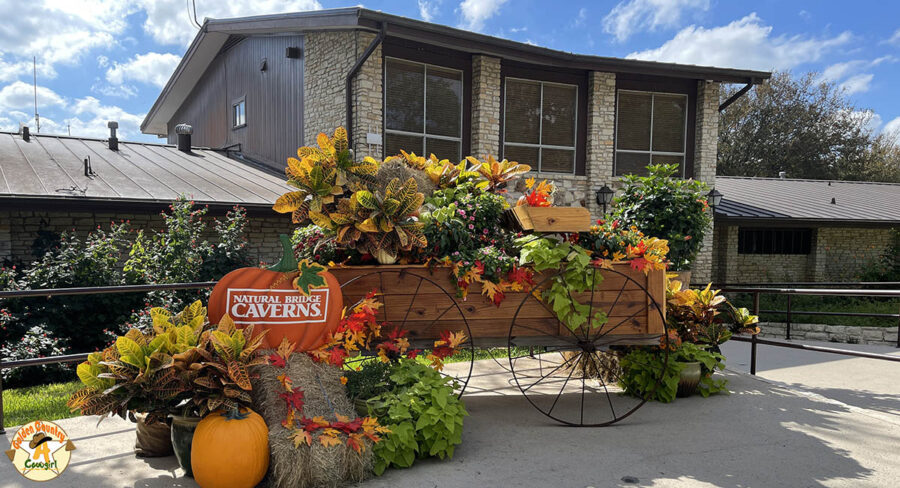 Natural Bridge Caverns got its name from the bridge that was left when a sinkhole formed and partially collapsed a roof. 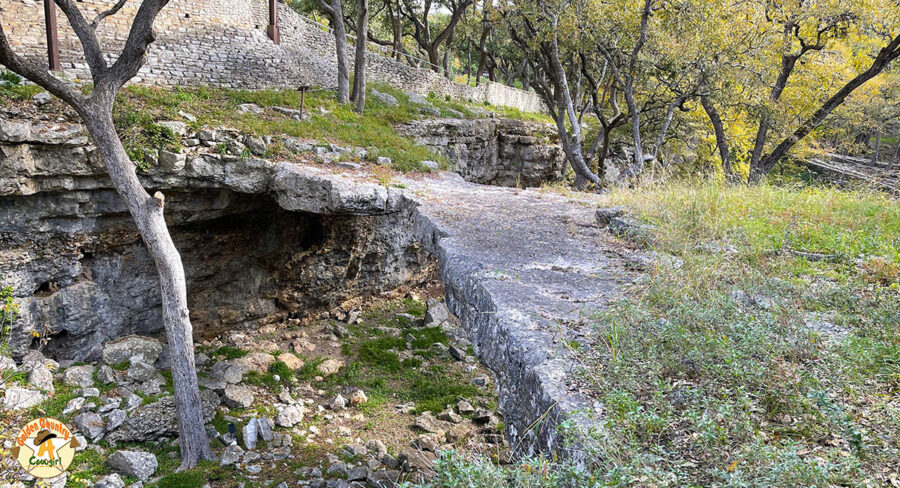 This is the natural bridge that gave Natural Bridge Caverns its name. You can see the wall of the sinkhole on the other side. 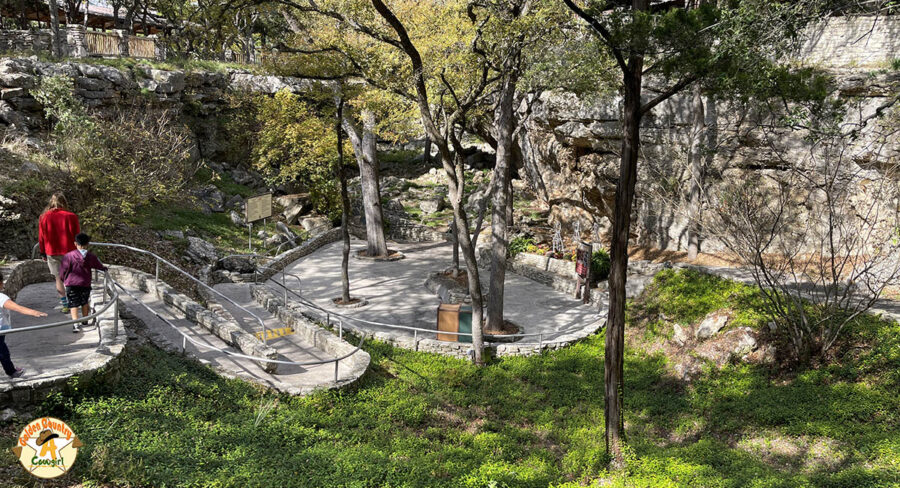 The caverns weren’t uncovered until 1960. The caverns are located on privately owned land, so when four students from St. Mary’s College in San Antonio wanted to explore the area, they had to get permission from the landowners. They were convinced that there was an extensive cave system beneath the 60-foot limestone bridge. Finally, on their fourth expedition, they discovered a two mile cavern passageway.

Everyone knew what an important find this was. As a result, the landowners decided to develop the first 1/2 mile and open it to the public. This became the Discovery Tour.

The first tour to open to the public in 1964 was the Discovery Tour. This 1/2 mile tour descends 180 feet below the surface but requires only minimal exertion. The Castle of the White Giants contains the largest formations in the cavern, including the King’s Throne, which was one of my favorites. I thought this formation looked like it was covered with giant octopi. I was in awe of all the amazing formations, especially in the Hall of the Mountain King, which is 100 feet high with spectacular formations covering the ceiling, walls and floor.

I was in awe of all the amazing formations, especially in the Hall of the Mountain King, which is 100 feet high with spectacular formations covering the ceiling, walls and floor. Click To Tweet 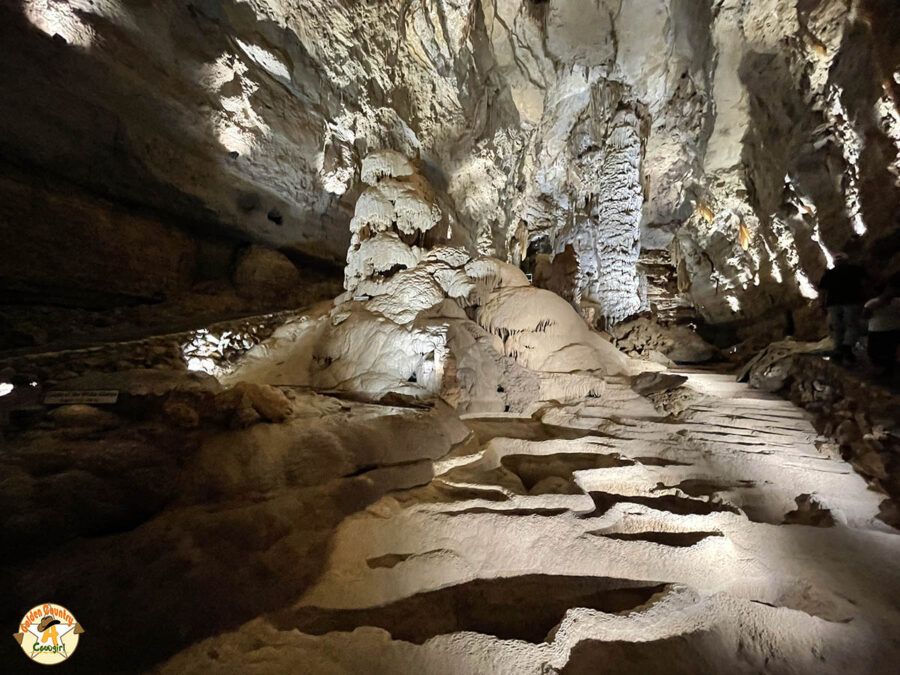 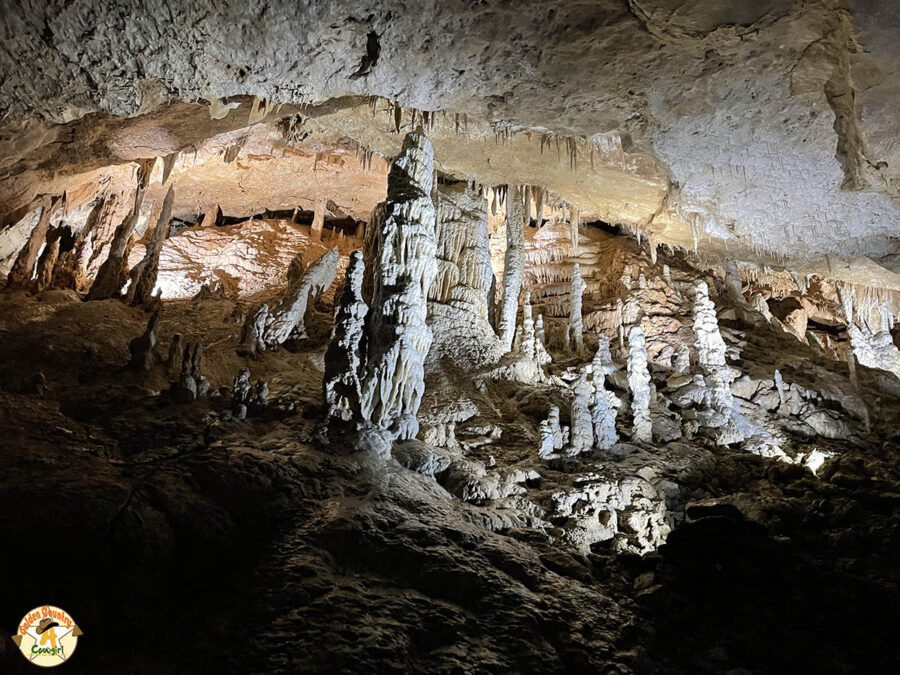 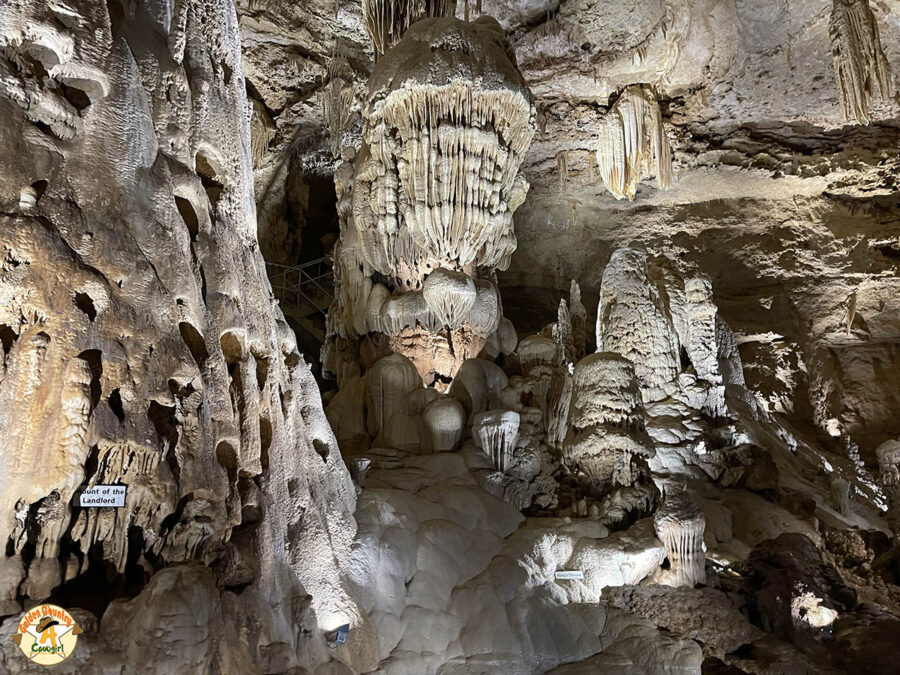 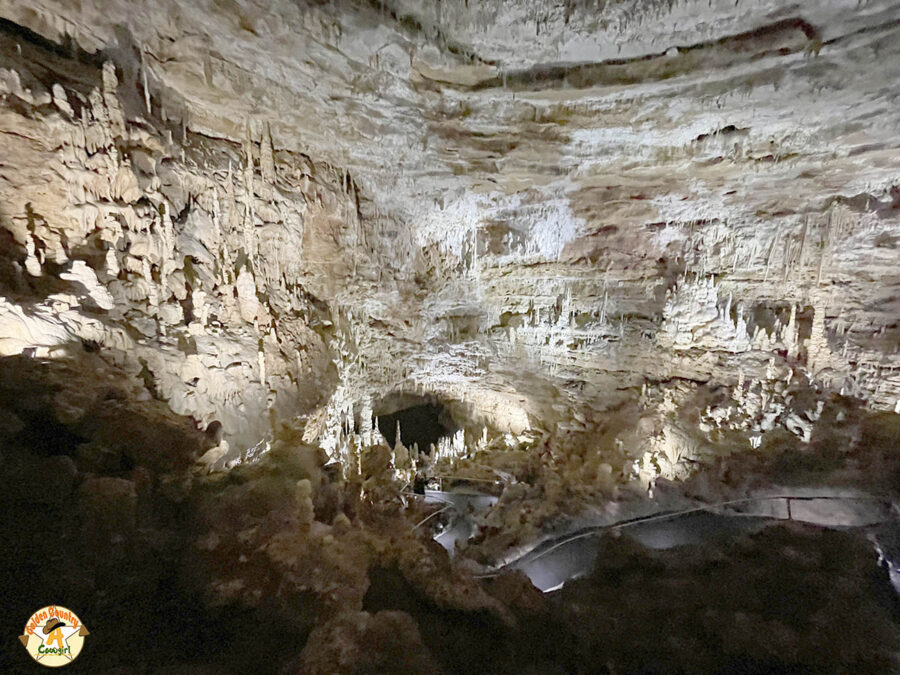 If you want to get down and dirty, you can book an Adventure Tour. These tours are for a minimum of two and a maximum of six participants and the fee is $149.99 per person. You will walk the Discovery Tour before you go off trail with no commercial lighting and no handrails! All gear is provided but be sure to wear clothes you won’t mind getting dirty, stained or even ruined.

You can arrange a private VIP tour. These intimate tours are limited to a family or small group.

The Hidden Passages Cave is undergoing a change. Therefore, that tour is not currently available.

The beautiful grounds are an attraction in themselves. There are water features and lots of colorful flower beds. Consequently, I saw lots of different types of butterflies. 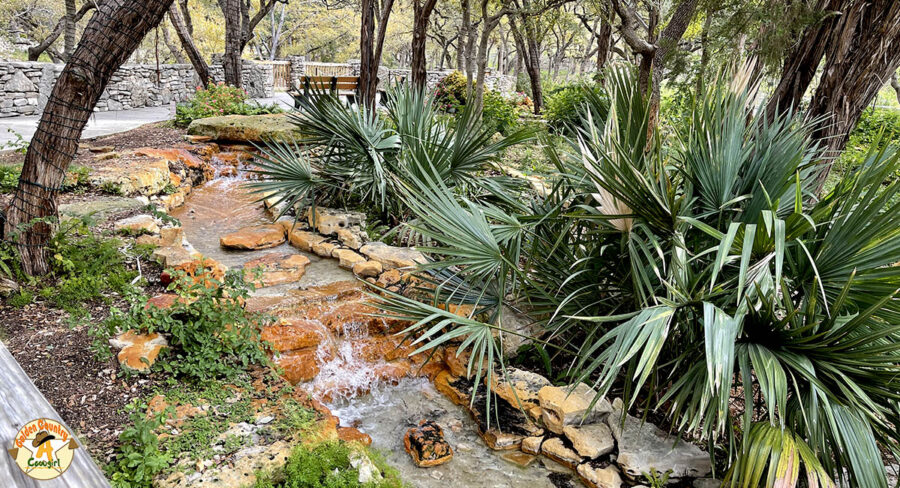 Above ground attractions at Natural Bridge Caverns include a ropes course and a zipline. Click To Tweet 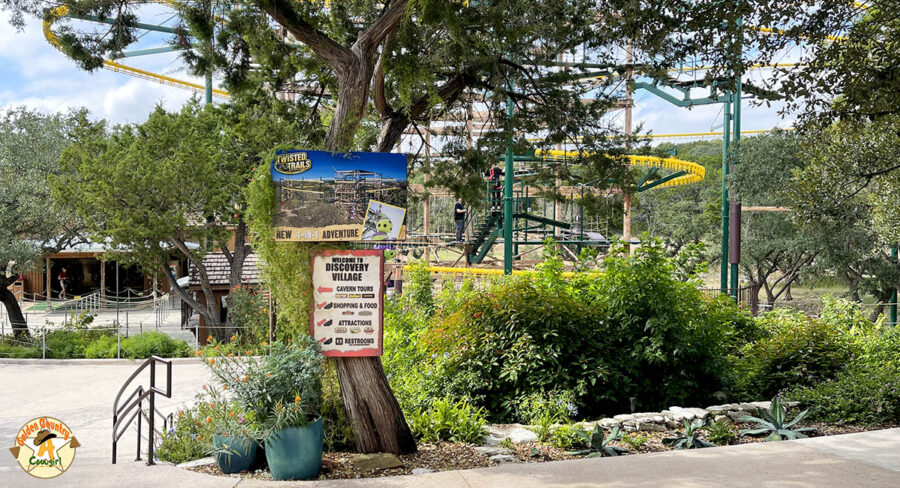 You can pan for treasure at the Discovery Village Mining Co. Pour your bag of mining “rough” into the screen tray and watch the water in the sluice reveal the gems and fossils. You get to keep whatever you find.

You can shop at Discovery Village Trading Post or in the gift shop. 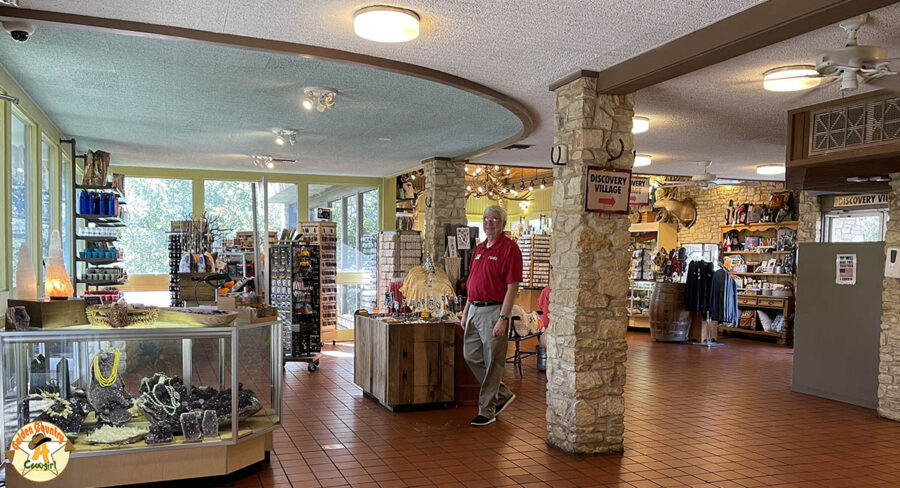 If, in all this excitement, you worked up an appetite, you can grab a bite to eat at Big Daddy’s Sweets, Treats and Brew.

You can watch for special events on the Natural Bridge Caverns Facebook page!

Ticket prices vary by day of the week and how far in advance you purchase them. The high for the Discovery Tour for same day tickets is $28.25 and it goes down from there. The high for children is $18.25.

Tickets for the Twisted Trails Adventure Course are $26.99 at the caverns or $24.99 online.

To sum up, my visit to Natural Bridge Caverns was amazing. Sadly, photos and even videos don’t do the formations and scale of the rooms justice. Therefore, I highly recommend adding this adventure to your list of things to do in San Antonio so you can experience all it has to offer for yourself. 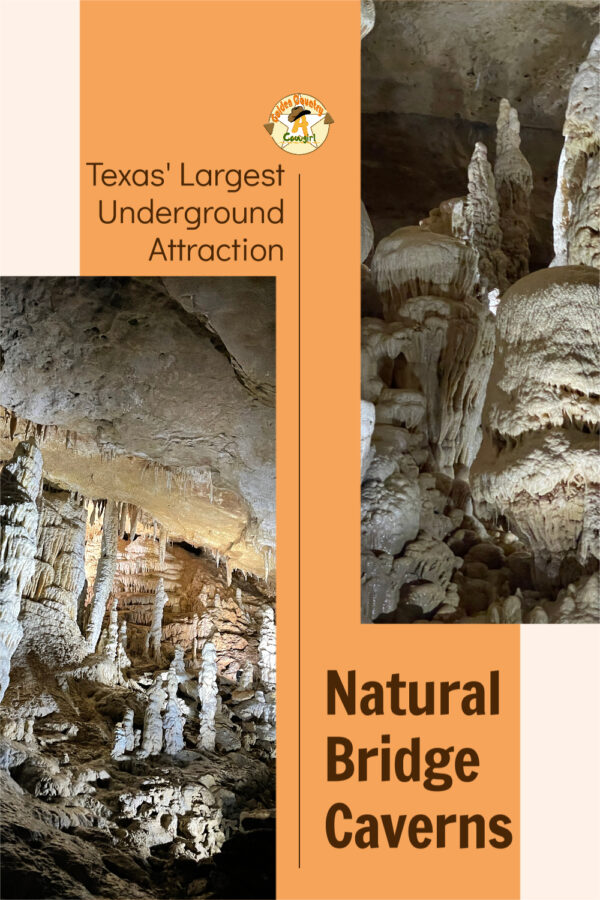 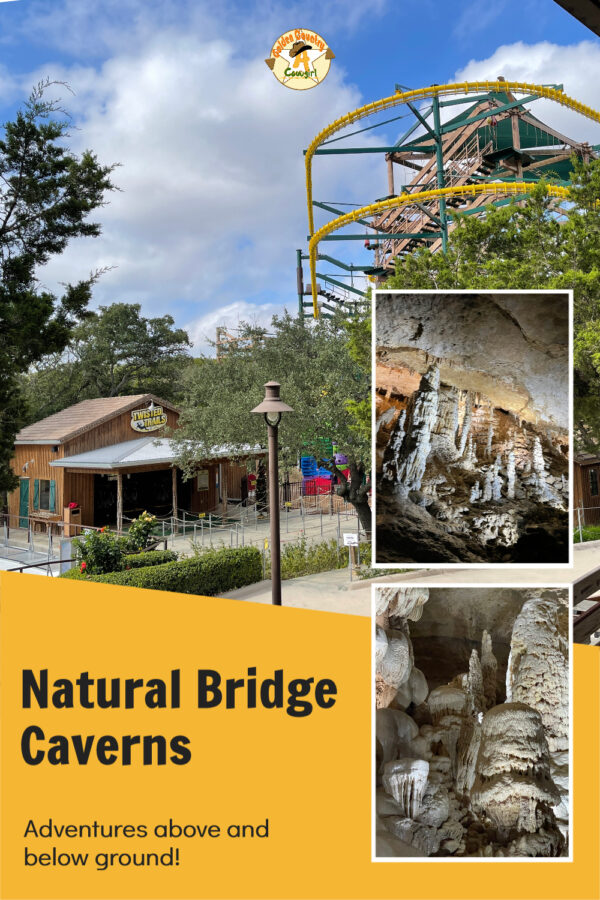 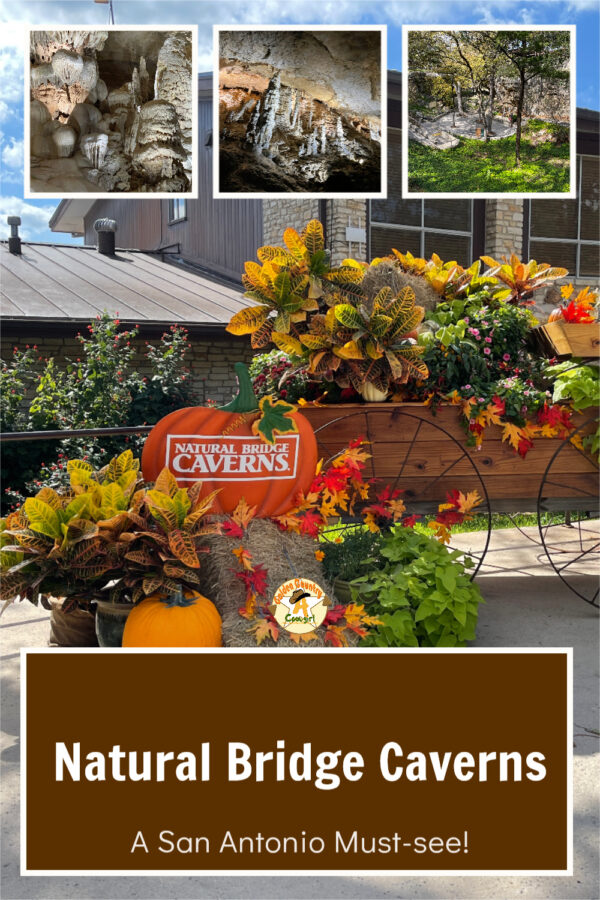 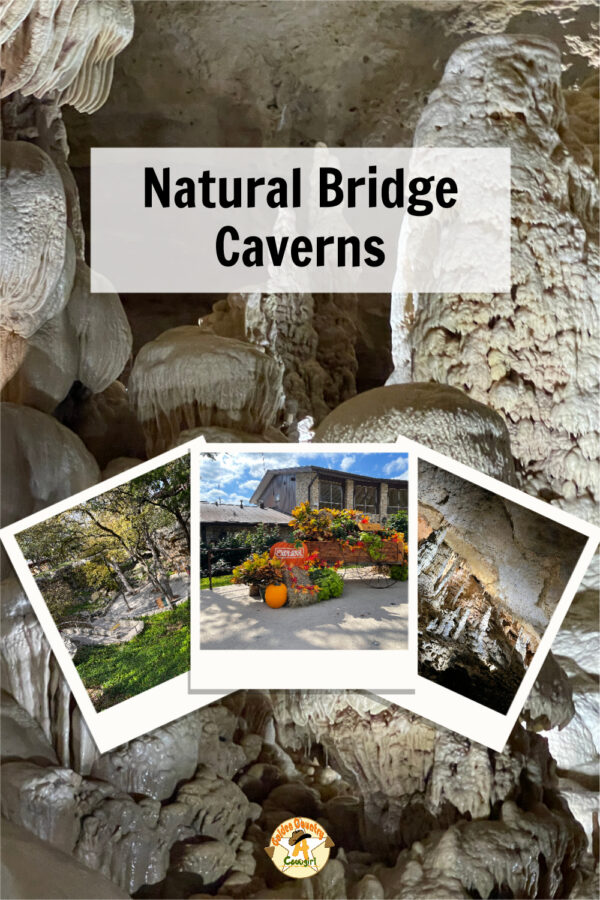