Riverside Dreamer Cruise on the Rio Grande in Mission, Texas

I first heard about the Riverside Dreamer a couple of weeks ago when I attended the Winter Texan Expo in McAllen. Another, yet quite different, opportunity to be on the water! I was very excited by the idea of a cruise on the Rio Grande on the Riverside Dreamer. And it is relatively close to me – less than an hour away. I haven’t done a river cruise since I was in Germany, too many years ago to admit to, so I was really looking forward to it. 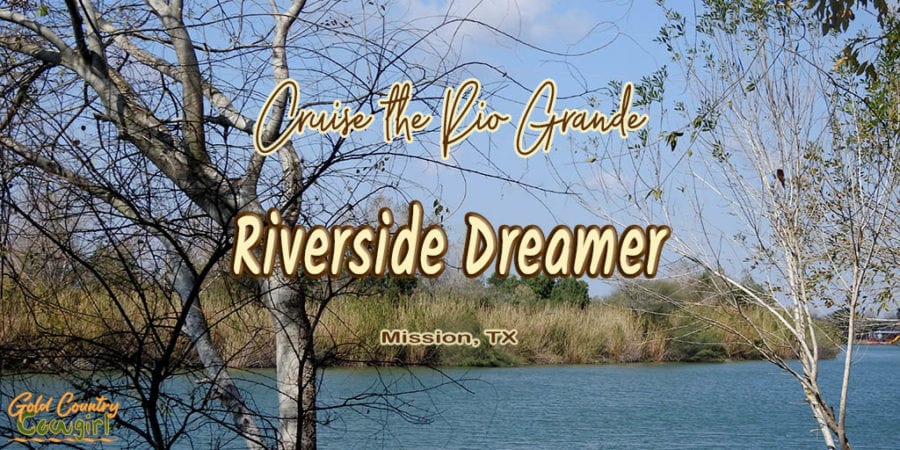 The Riverside Dreamer is a custom built 55-foot pontoon boat. It has cushioned seats and a maximum capacity of 49 passengers. There’s a snack bar and restroom. No alcoholic beverages from the Riverside Club are allowed on board.

Reservations are not required but highly recommended. You can only make a reservation one week in advance and I was told the tours often fill by the Friday before. They only take cash so you don’t pay until you arrive. As a consequence, there are sometimes no shows and you might be able to fill in those spots if you arrive without a reservation. Ticket sales start about 50 minutes prior to departure time. Rates are $13 for adults, $11 for seniors, and $9 for children for the one-hour cruise. The two-hour cruise is $24 for adults, $20 for seniors and $16 for children. 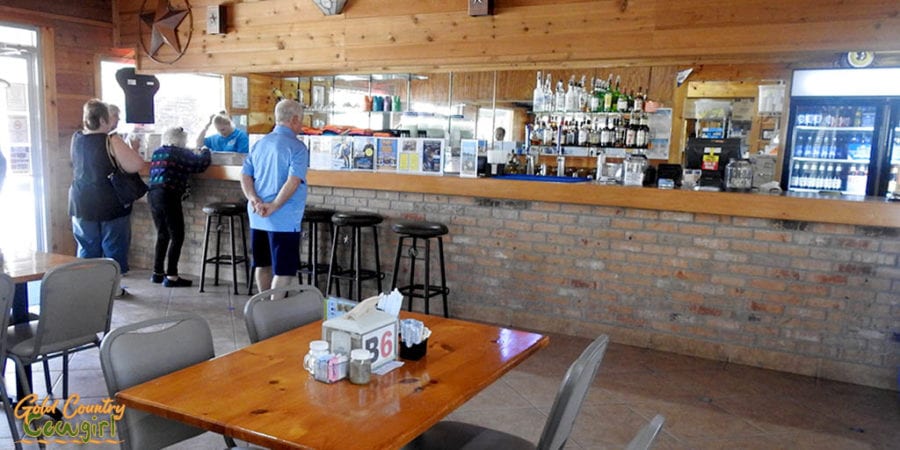 The Riverside Dreamer Cruise on the Rio Grande

The one-hour tour, which goes down river to the dam, departs Monday through Saturday at noon. The two-hour cruise goes upriver Tuesday and Thursday at 1 pm. Of course, since I wanted to spend as much time as possible on the water, I chose the two-hour cruise. 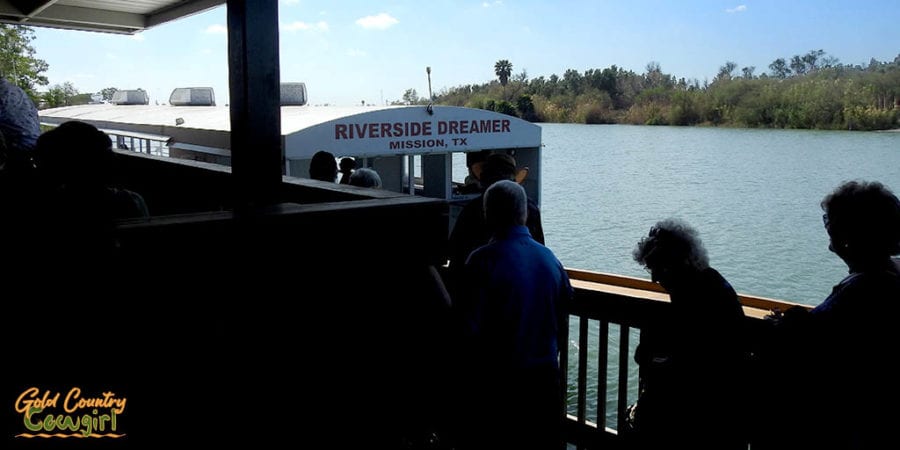 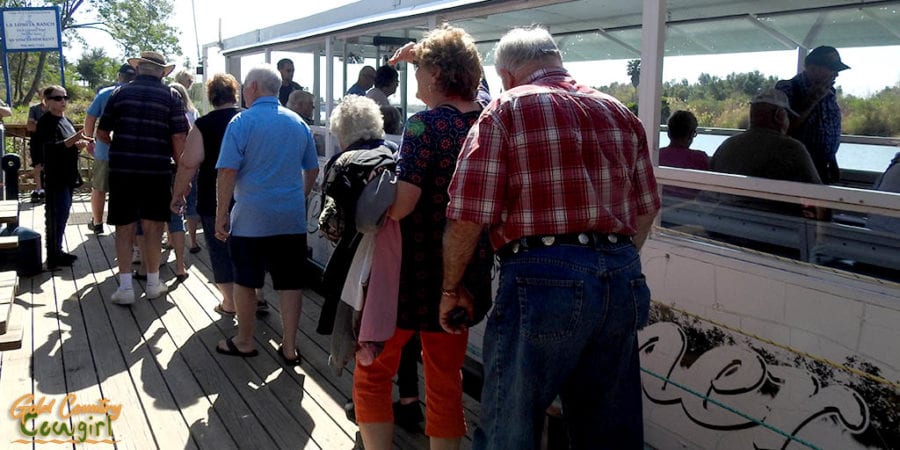 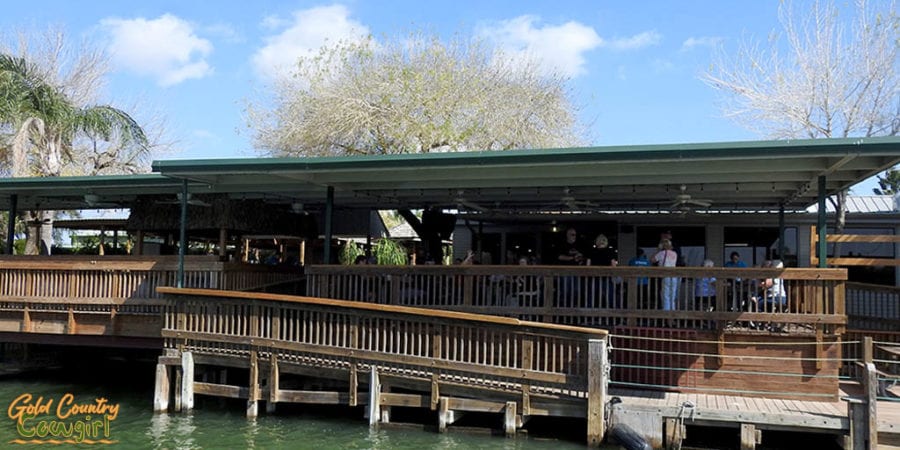 Border security was ever-present with both Border Patrol and Highway Patrol boats. There are also towers with cameras that are monitored in McAllen. 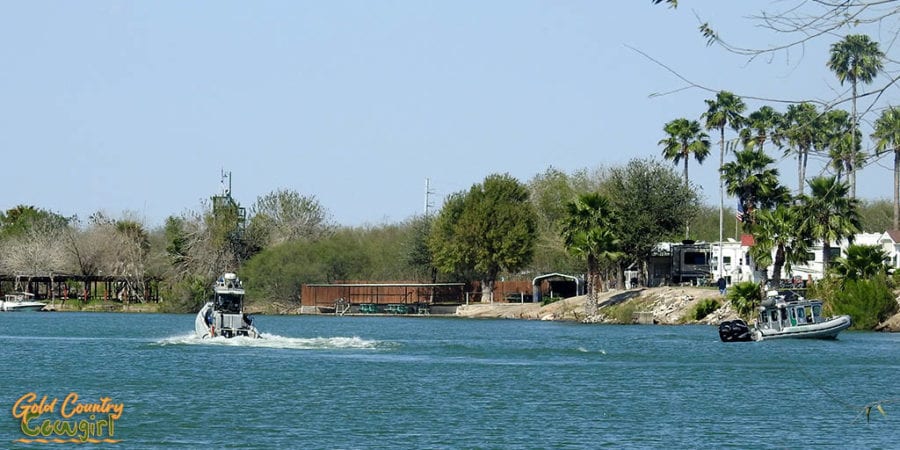 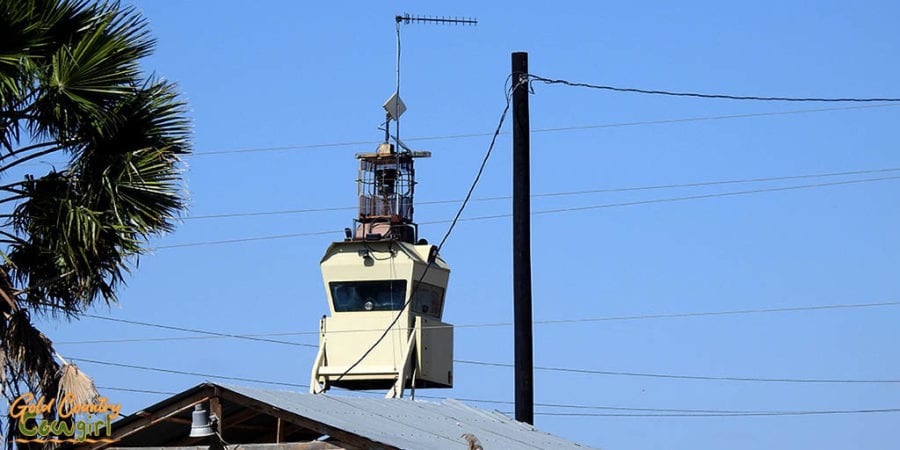 It was surprising to me that the US side of the river, after a few houses near the Riverside Club and RV park, marked by the distinct chimney, had very little development. There were sugar cane fields and undeveloped scrub. 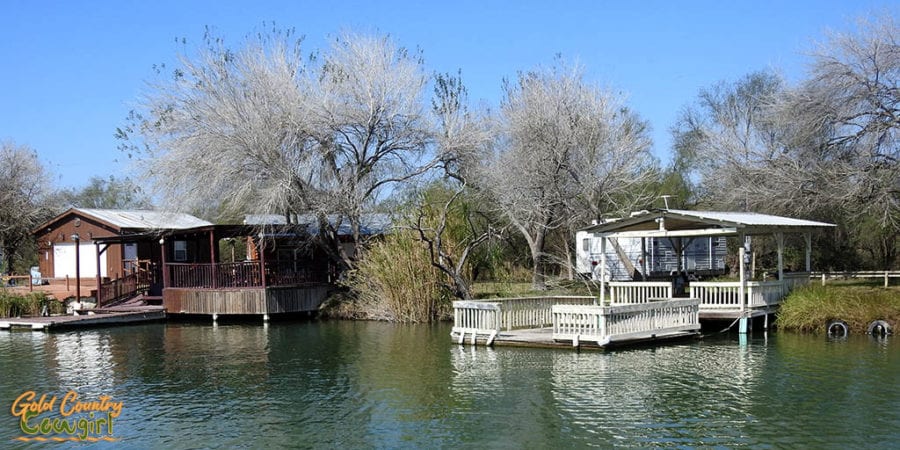 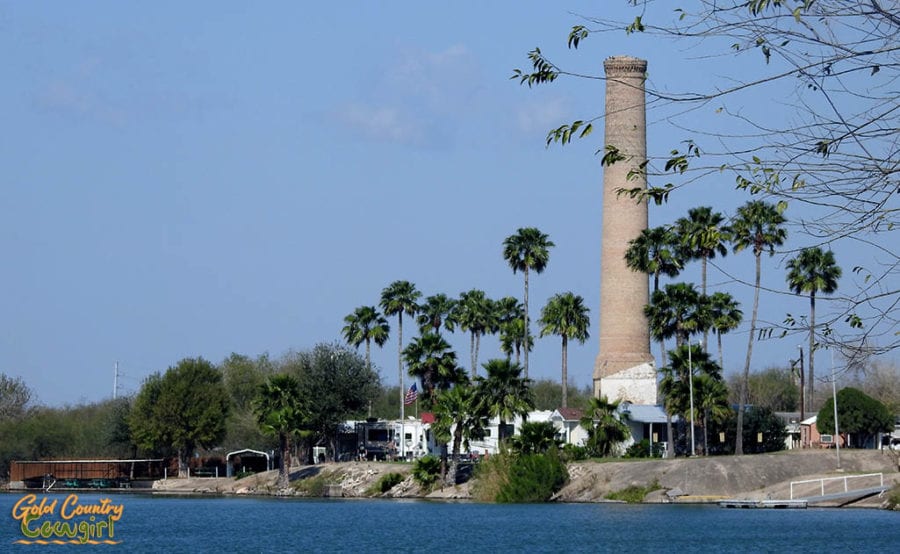 By contrast, the Mexican side had more development in the way of parks, restaurants, bars and beautiful homes. Sadly, many of these things were badly damaged during Hurricane Alex in 2010. The hurricane caused the Rio Grande to rise by 12 feet, which destroyed a great deal of property along the river. Some of it is being restored but much of it looks abandoned. The Mexican Army had a couple of encampments along the river. 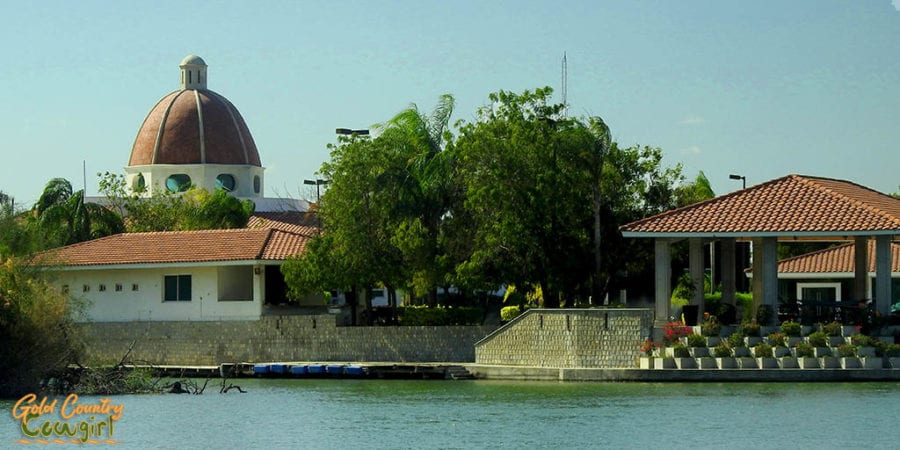 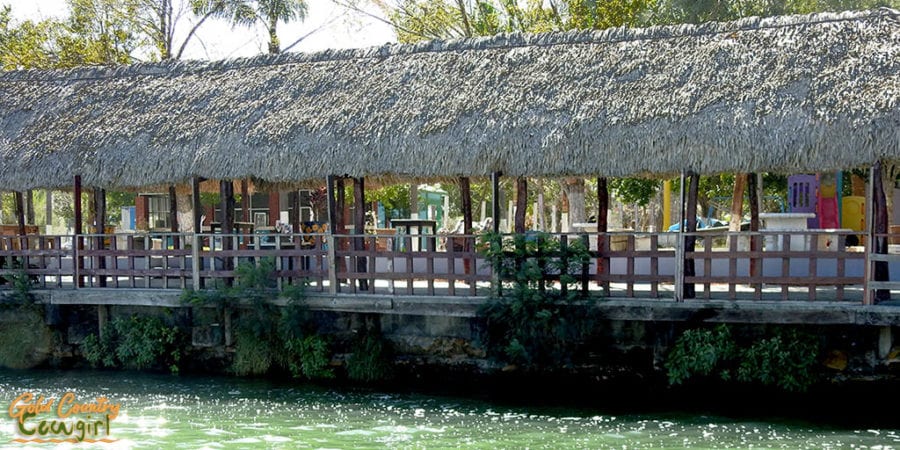 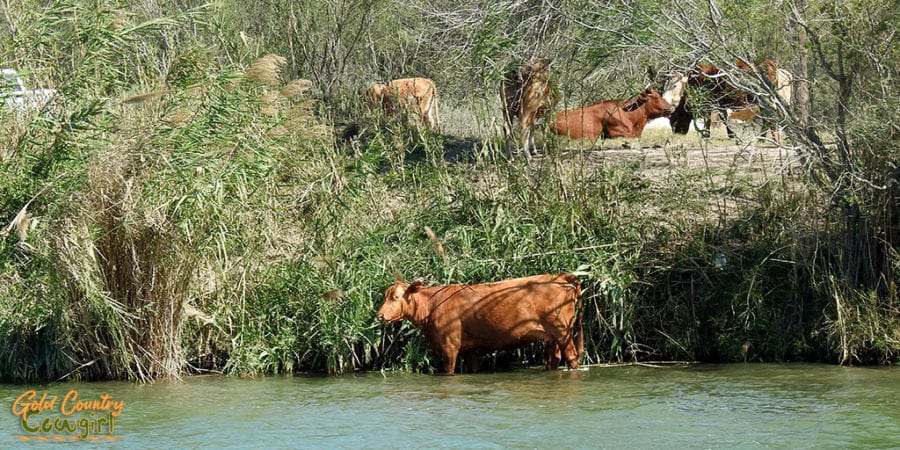 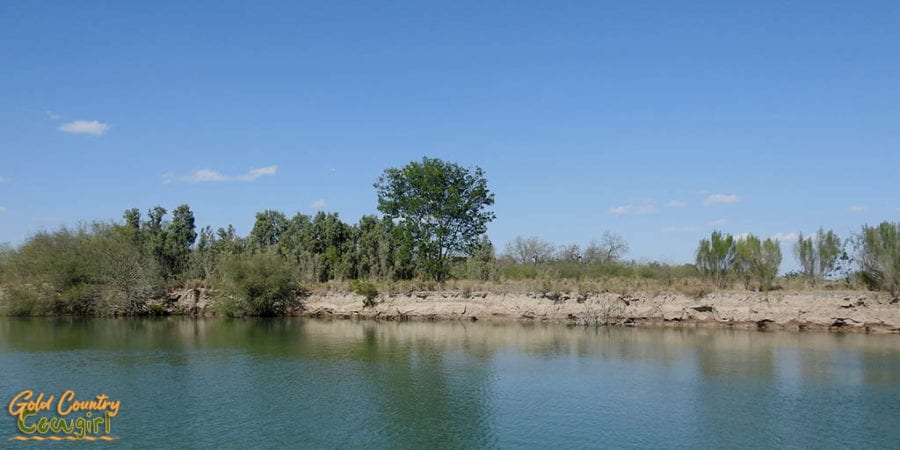 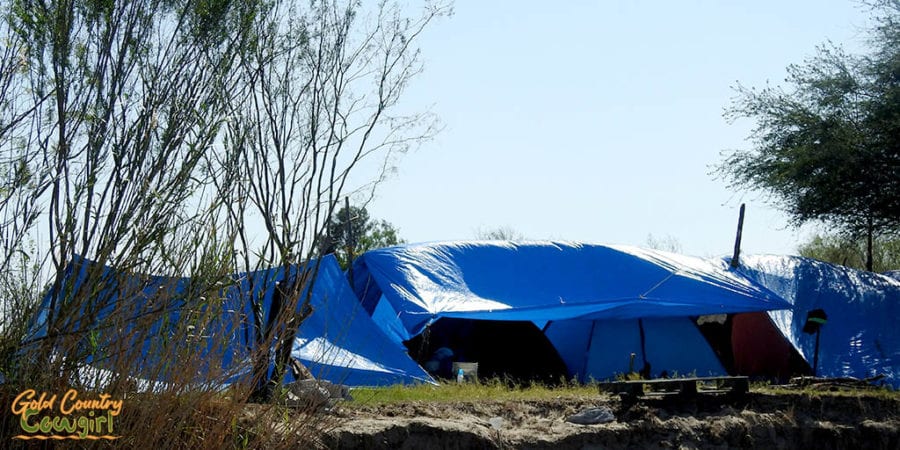 This was an aspect of the cruise I was not expecting. I have always been in favor of the border wall but never gave much thought to its impact. I’m not in favor of the wall because I think we need to be separated from Mexico. The fact that we need it makes me sad, but it seems the best way to help stem the flow of criminals and drug trafficking into the US from Mexico. You can see evidence of this every day occurrence all along the river.

On the two-hour cruise up the Rio Grande, the Riverside Dreamer goes past a long stretch of wall that is being built on private land by a private company. The company’s goal is to show that the wall can be built cheaper and quicker than the government’s contract (which has already been awarded to another company). Apparently, they are succeeding in spades. The many miles of wall they have built so far has taken about two months and is coming in at less than half the contract amount. 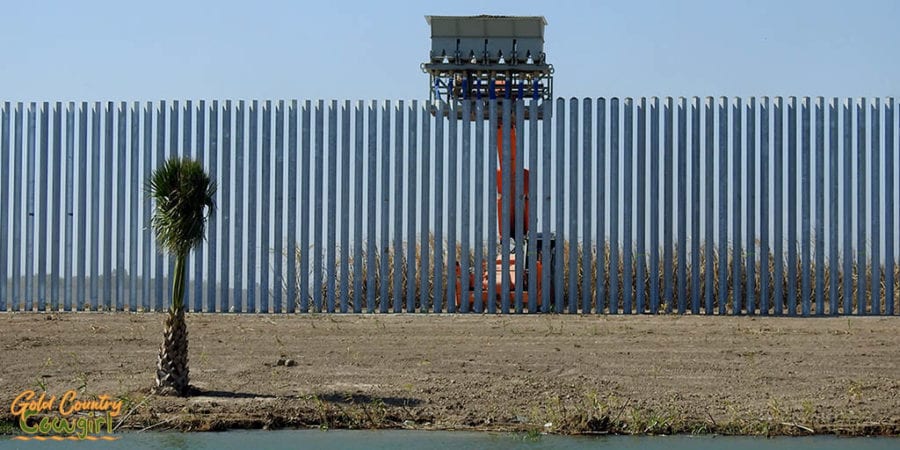 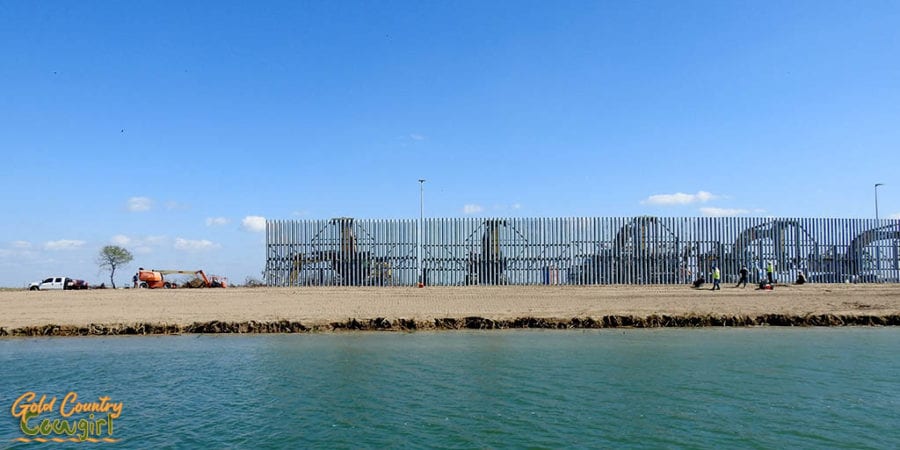 I arrived a couple of hours before my cruise time because I wanted to eat lunch on the river. The family-owned Riverside Club Bar & Grill is open year round from 11 am to 8 pm. They have nachos as well as a plethora of deep-fried appetizers. Salads and sandwiches make up the meal offerings. The pork tenderloin sandwich (see photo below) seems to be one of the most popular items on the menu. It is huge and tasty. Enjoy a cocktail from the full bar before or after your meal, or while you just relax by the river. 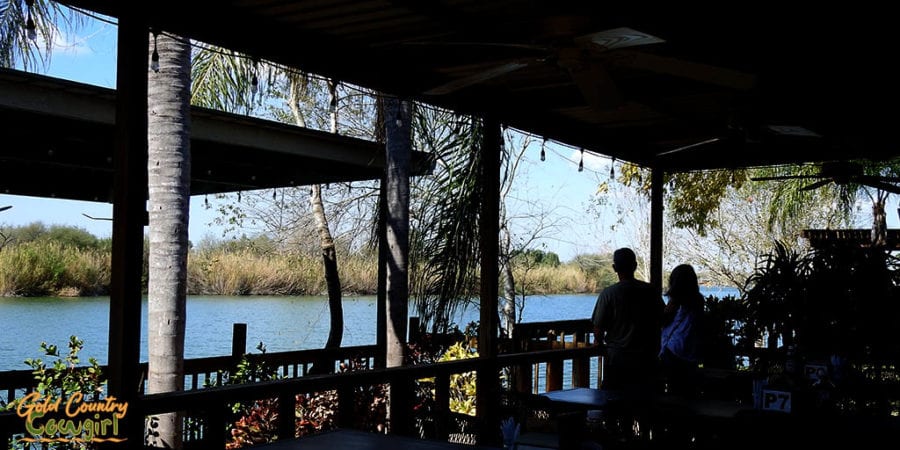 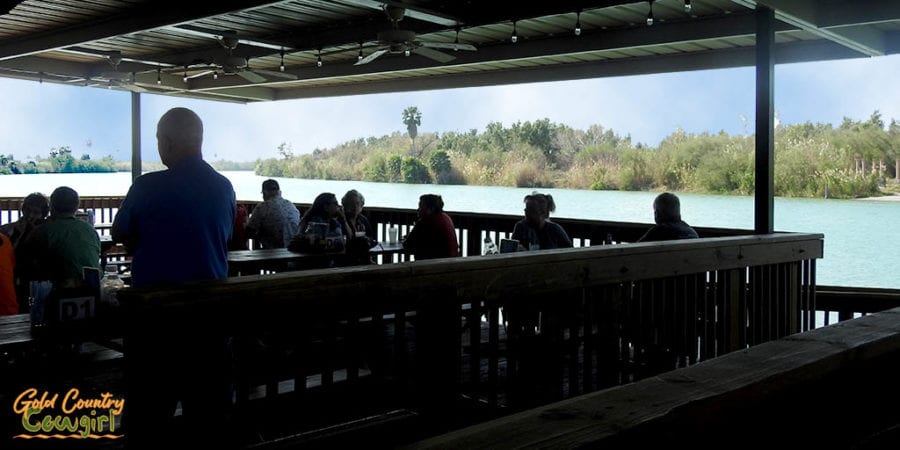 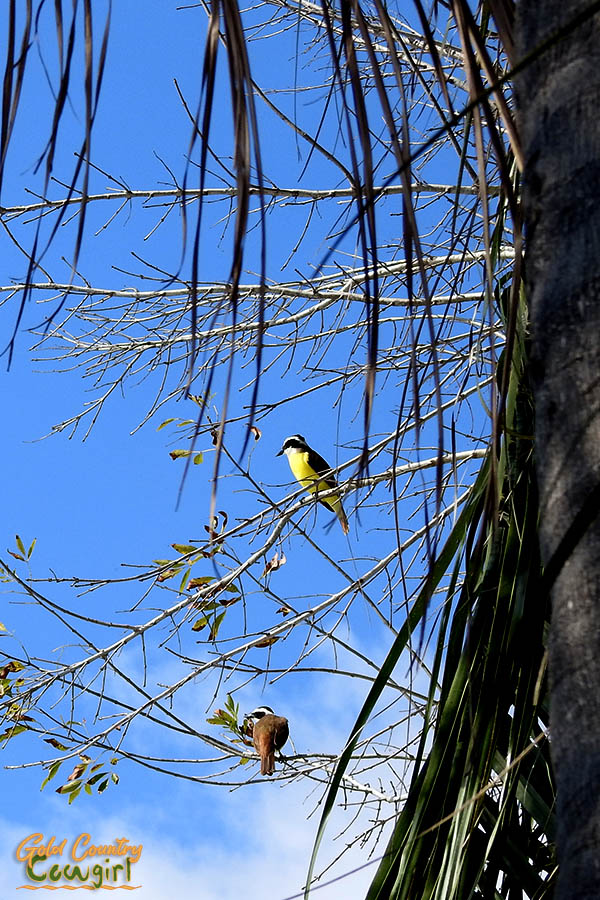 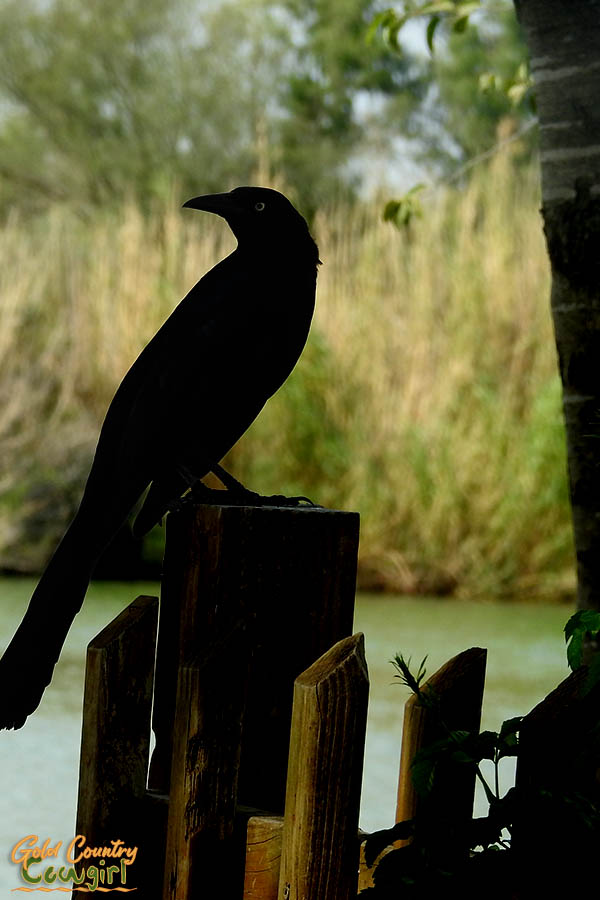 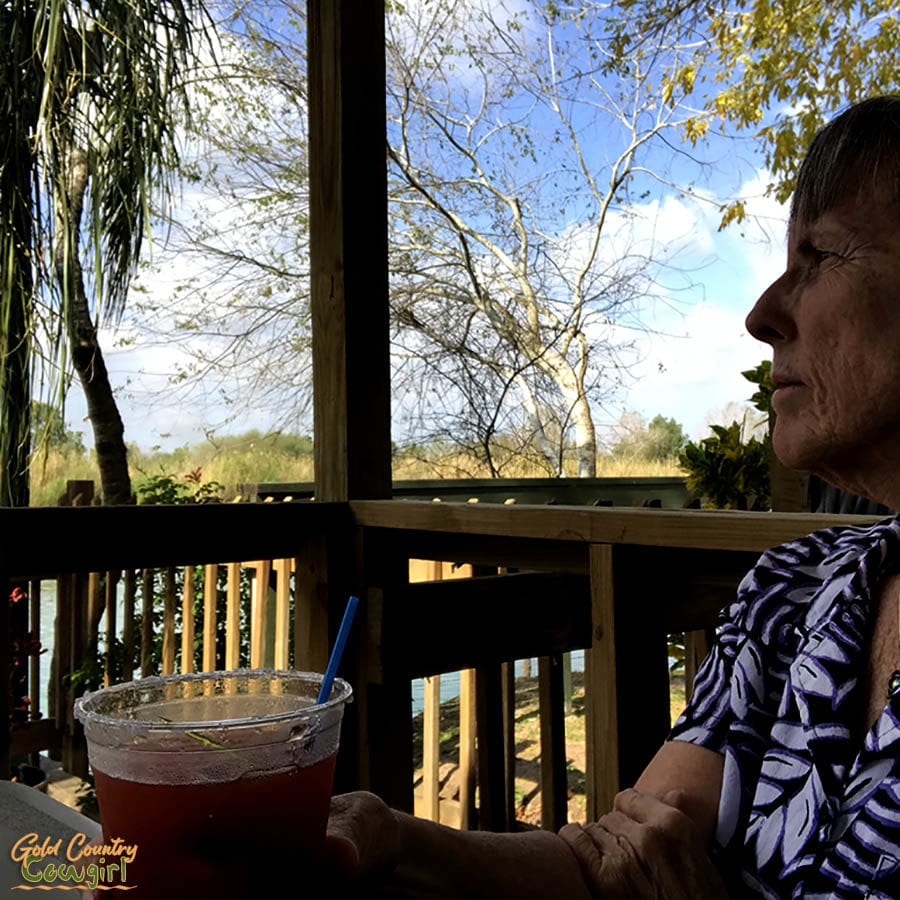 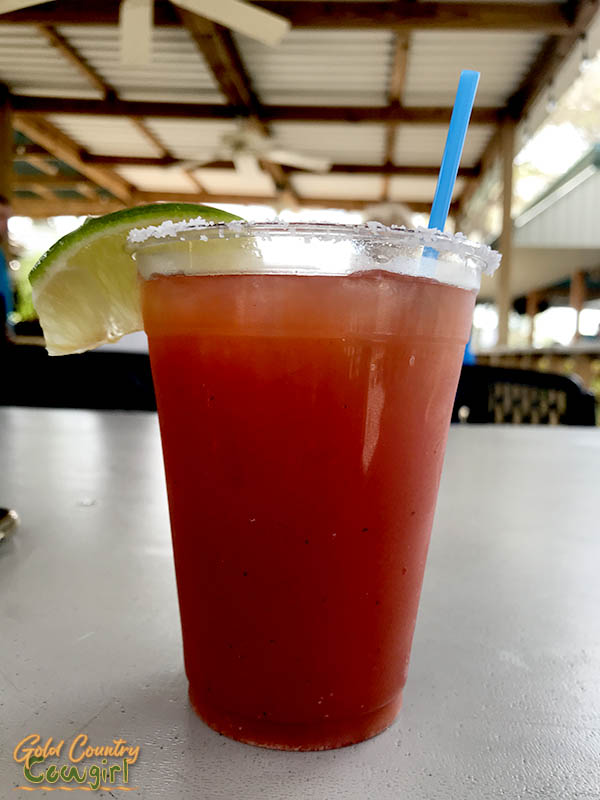 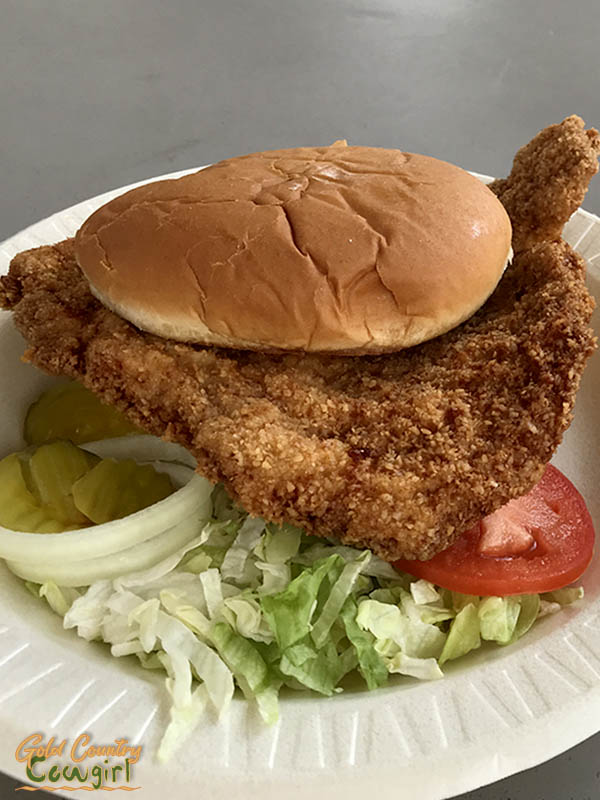 Final Thoughts on the Riverside Dreamer Cruise on the Rio Grande

The boat is quiet and the river is smooth so the ride is very steady. Even if you get seasick on the ocean, you could easily do this cruise. Don’t expect spectacular scenery. Instead, go prepared to learn some interesting facts and have a relaxing afternoon outdoors on the river. Combine this with a meal in the open-air, tranquil ambience at the Riverside Club and you’ll have a great time. I will definitely be returning! 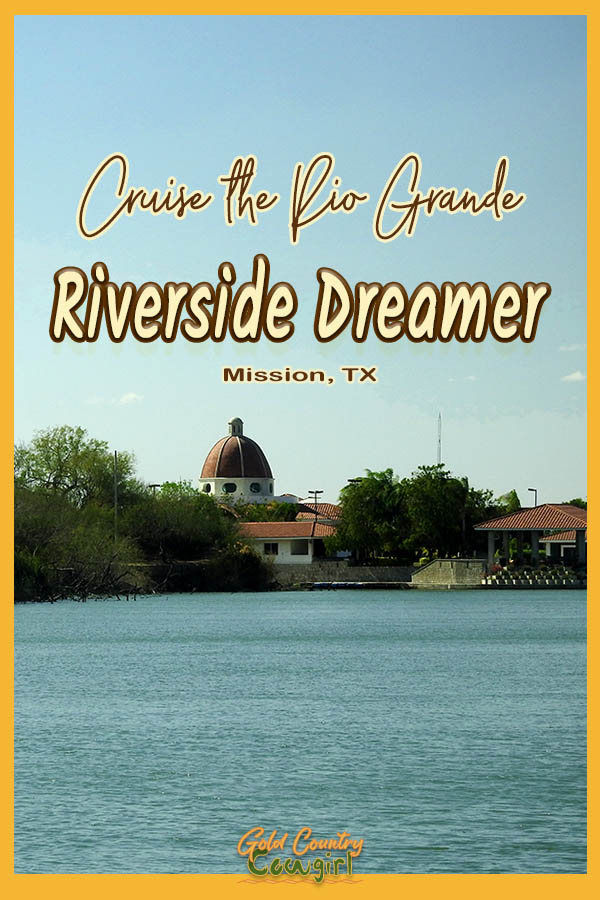 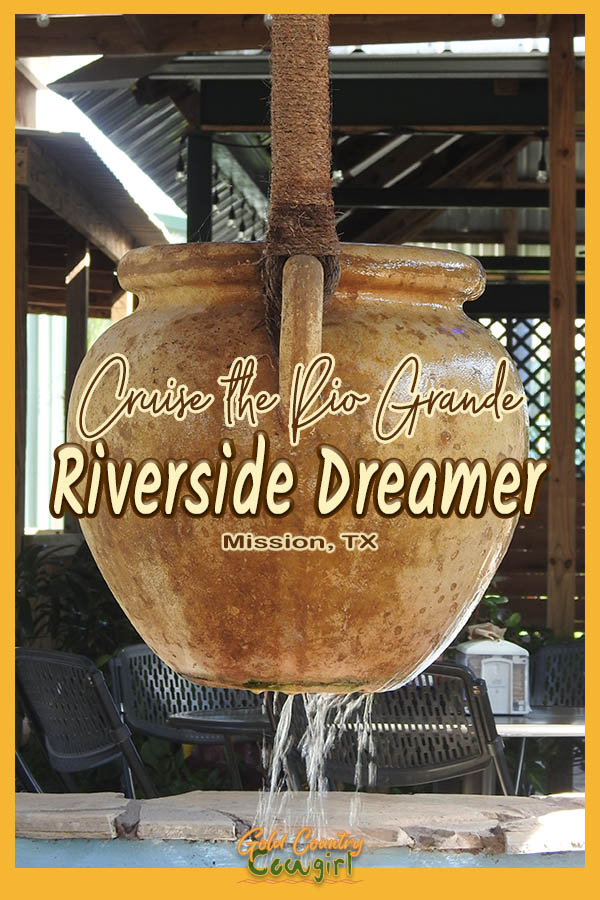 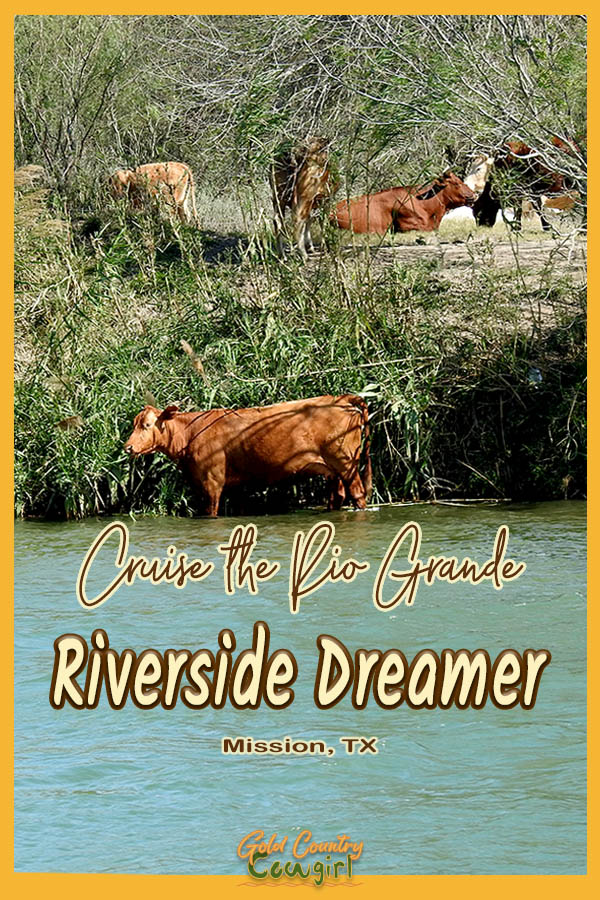 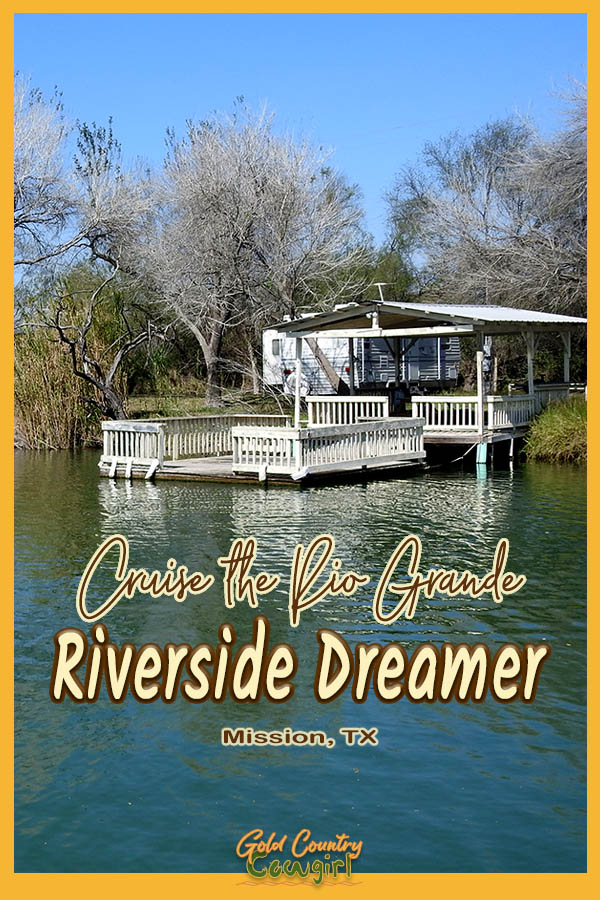 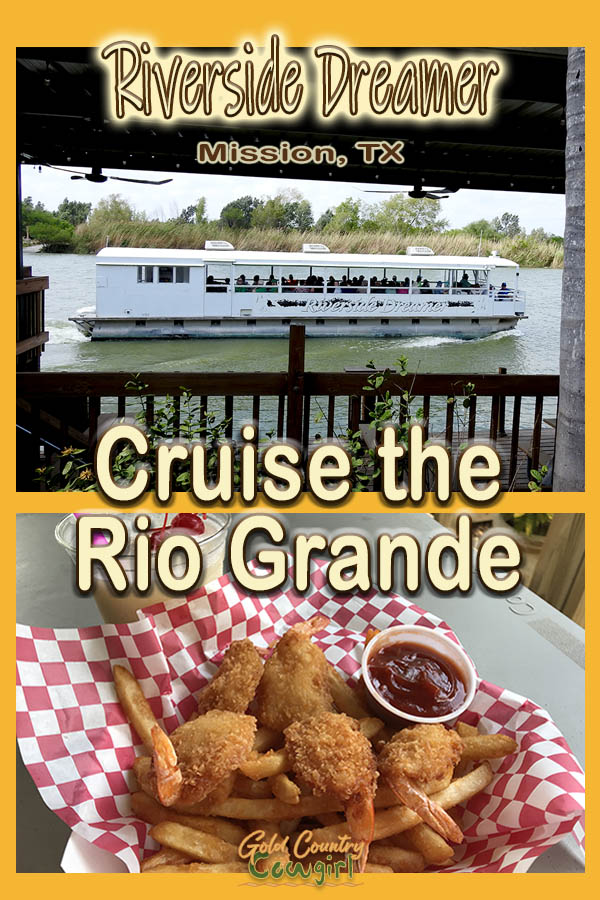 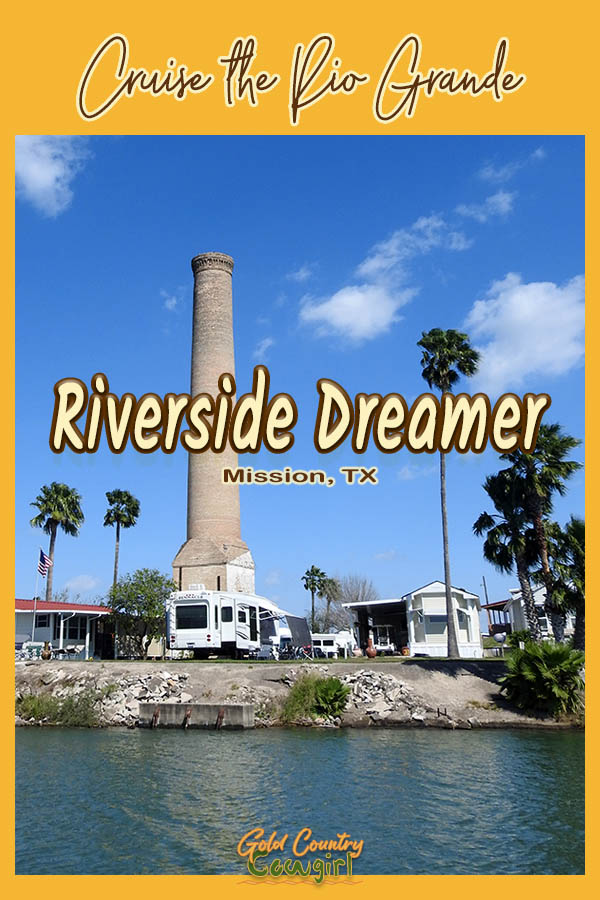