My friend Joy and her husband were here visiting for a few days from Southern California so I planned some activities for them. We spent the day on Sunday in Murphys attending their Presidents’ Wine Weekend event. On the drive to Murphys, Joy wanted to know if we could visit Mercer Caverns wile we were there since it was only a mile away. One of my goals is to visit all four of the fantastic caverns in Northern California’s Gold Country, so I was happy to agree. Because it is so close and the tour only lasts about an hour, it was a perfect break from all the wine tasting. 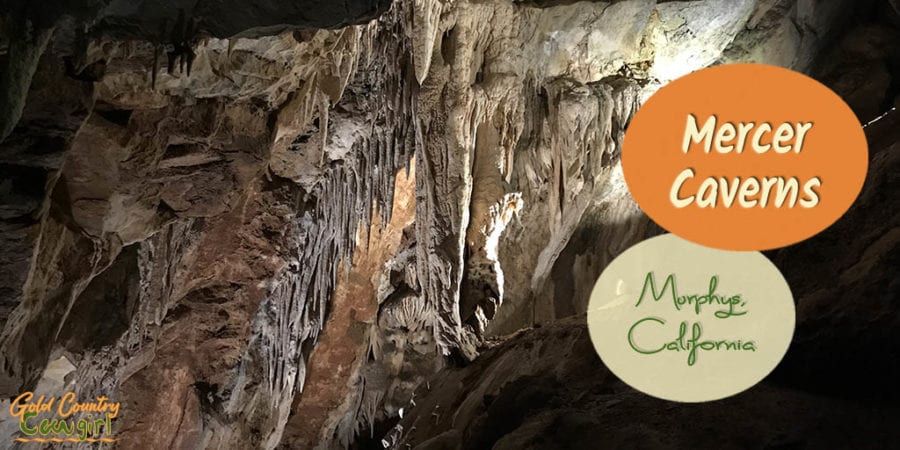 Since I visited Black Chasm Cavern in Volcano last year, I figured Mercer Caverns had a similar system where tours were filled on a first come, first served basis and could fill up early in the day. When I called at 2 pm to see when the next available tour was, we were lucky to just get in to the 3 pm tour. By the time we got there, just a few minutes later, they were booked up through 4 pm even though they were doing extra tours due to the holiday.

Helpful Tips Before the Tour

You’ll need to leave your purse, backpack and any other type of bag in the car. No water bottles. This is to protect the delicate formations in the caverns and so they don’t get in the way when you are ducking under low spots. 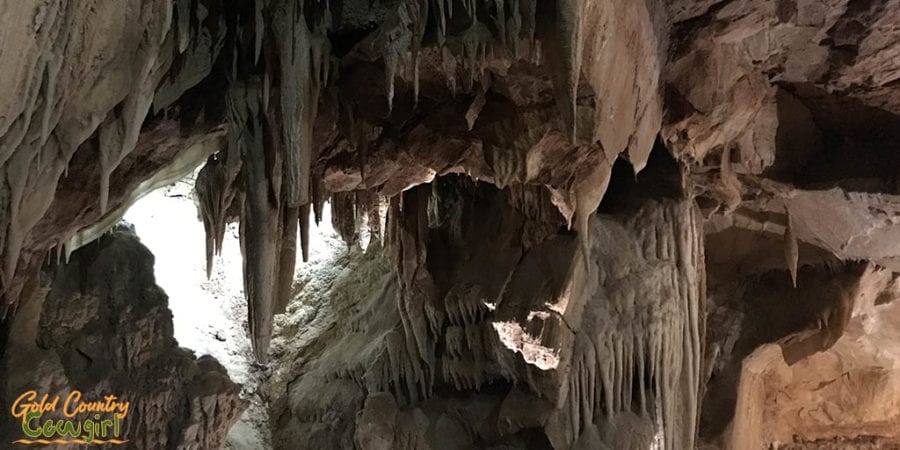 Be careful not to touch any of the walls or formations. The oil in your skin will cause permanent damage.

Photography with a small camera or phone camera is allowed but no video cameras or tripods.

It is a constant 55 degrees in the cavern so you will probably want a sweatshirt or sweater no matter how warm it is outside.

There was no mention of claustrophobia before this tour but, if you are extremely claustrophobic, just be aware that there are a few low and tight spots.

Mercer Caverns is one of three caverns located in Calaveras County. The other two are Moaning Cavern and California Cavern. The fourth cavern in Gold Country is Black Chasm Cavern in Amador County.

Mercer Caverns was discovered in 1885 by Walter J. Mercer. He sat down in the shade of a tree on a hot day and saw the grass near him moving. The wind was not blowing so he moved the vegetation aside and saw a hole. He dropped some pebbles in and heard them fall for a distance so he knew there was something down there. 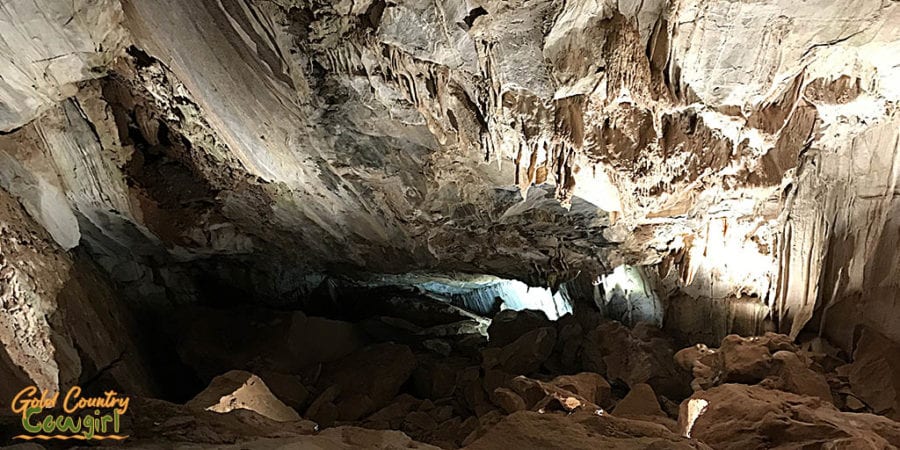 After enlarging the entrance, he and two friends explored the cave for two weeks. During this exploration, they found the remains of six humans that were eventually determined to be members of the Mi-Wuk tribe of native Americans and were possibly 1500 to 2000 years old. They also found the skeleton of what they thought at the time was a bear. In 1899, the Smithsonian Institute determined that it was actually an extinct Sierra Ground Sloth.

The Mercer Caverns website describes the tour as moderately strenuous. I felt it was fairly easy as there are plenty of stops along the way to rest while the guide talks about the history and geology of the caverns. Our young guide, Josh, was informative, enthusiastic and entertaining. 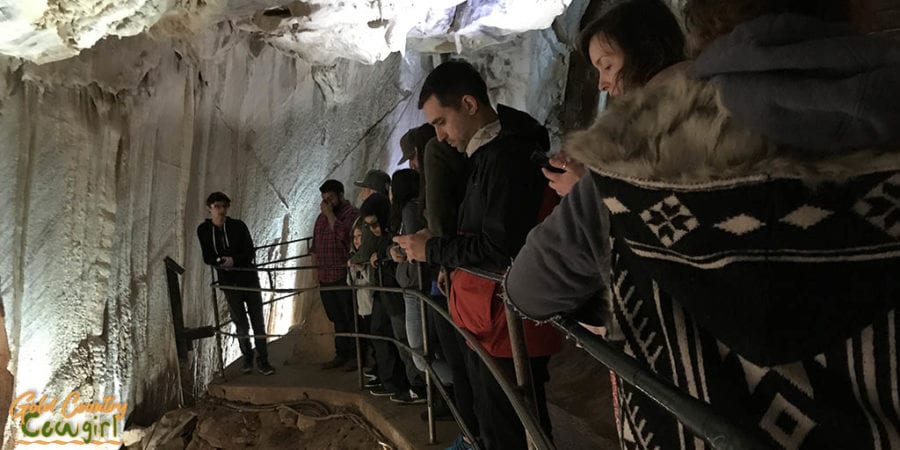 There are 208 steps that take you down about 161 feet below the surface. There is a different exit than entry which has 232 steps going out. The steps are steep and quite narrow in many places. You’ll have to duck and lean sideways in some areas. The steps can be slippery so be sure to wear comfortable, non-slip shoes! 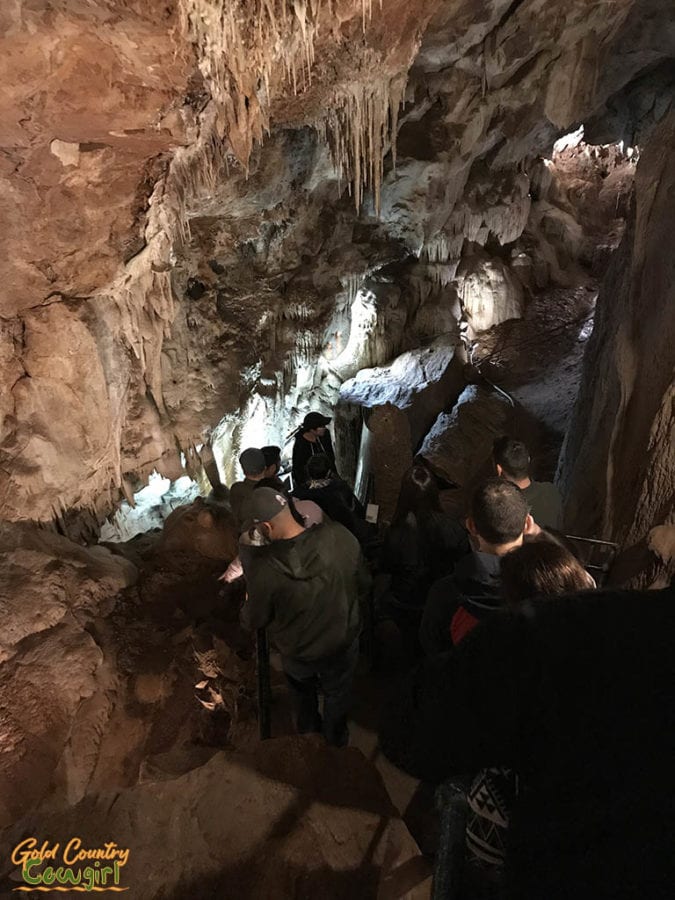 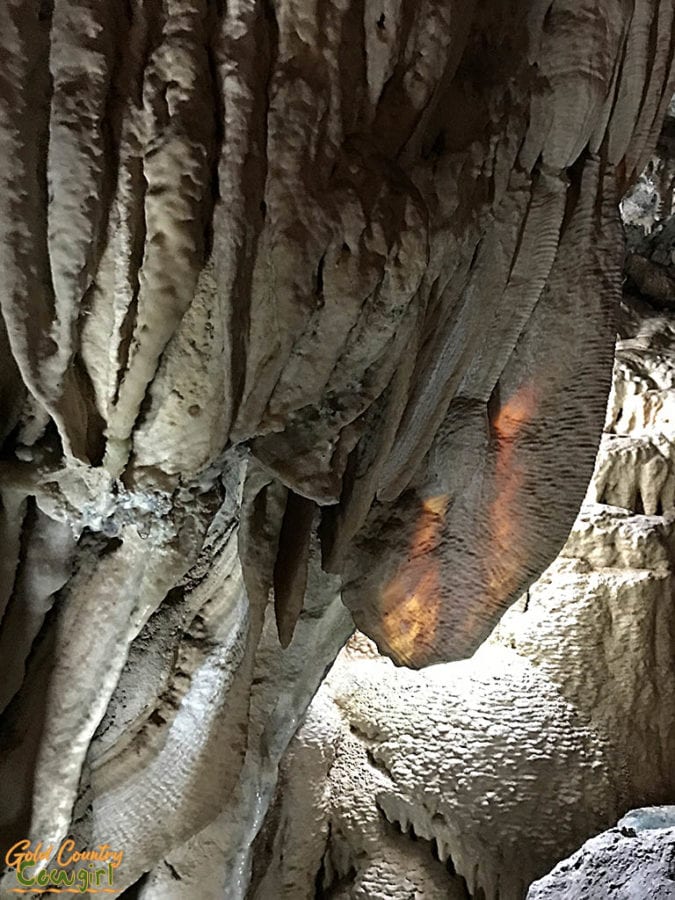 The beautiful display of decorations in the cavern includes stalactites, stalagmites, flowstone, dogtooth spar crystals, coralloids and even some halictites, which is what saved Black Chasm Cavern from becoming an open pit mine. An unusual stalactite found here is where roots penetrating the roof have been coated to form rootsicles. An outstanding display of aragonite crystals earned the Mercers a special award at the 1900 Paris World’s Fair. 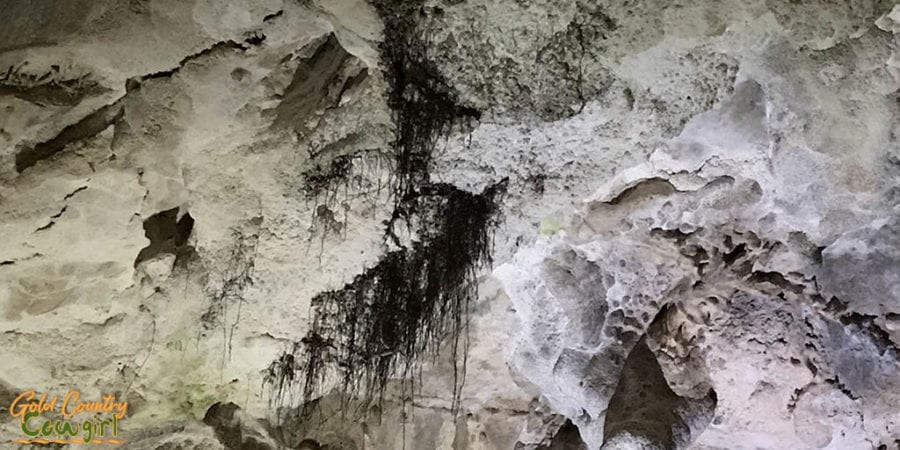 Roots coming through the roof of the cavern 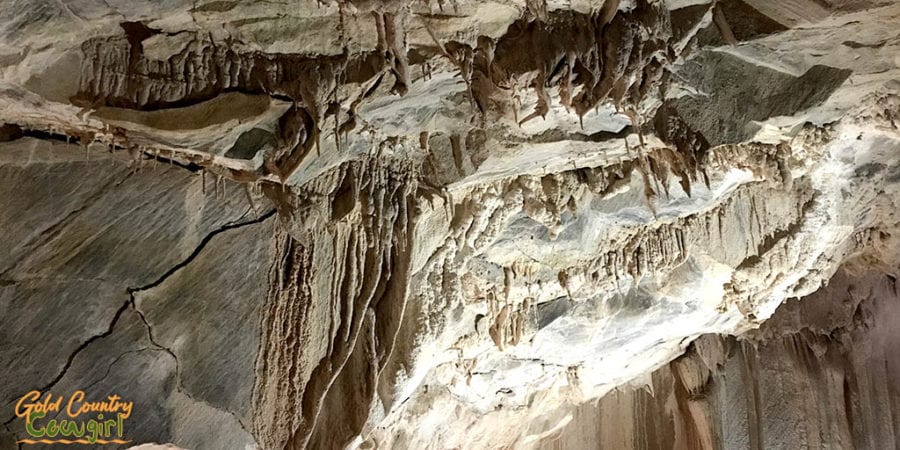 Roots that have been coated to form rootsicles 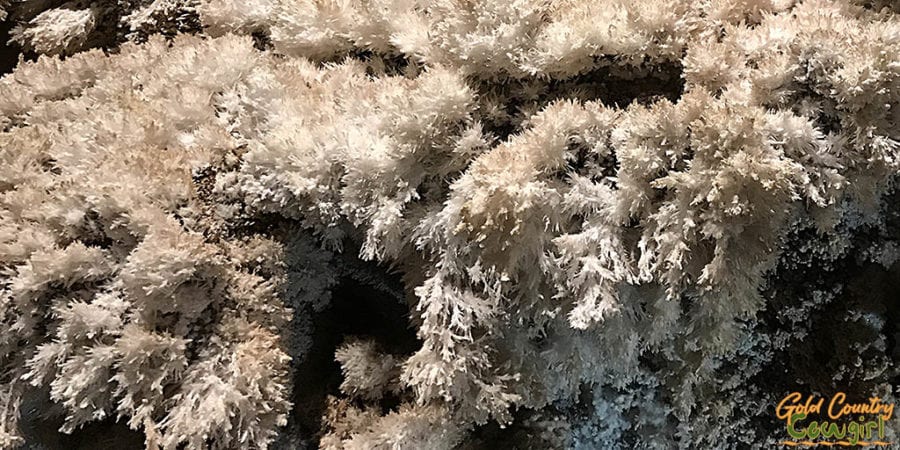 On the tour, we learned about the various ways they attempted to light the caverns. The first visitors used ropes and ladders to explore the caverns and held candle boards in their teeth! They experimented with several other forms of lighting until the first electrical lighting system was installed in 1901. At one point, we got to experience the total darkness in the caves when the lights were turned off. 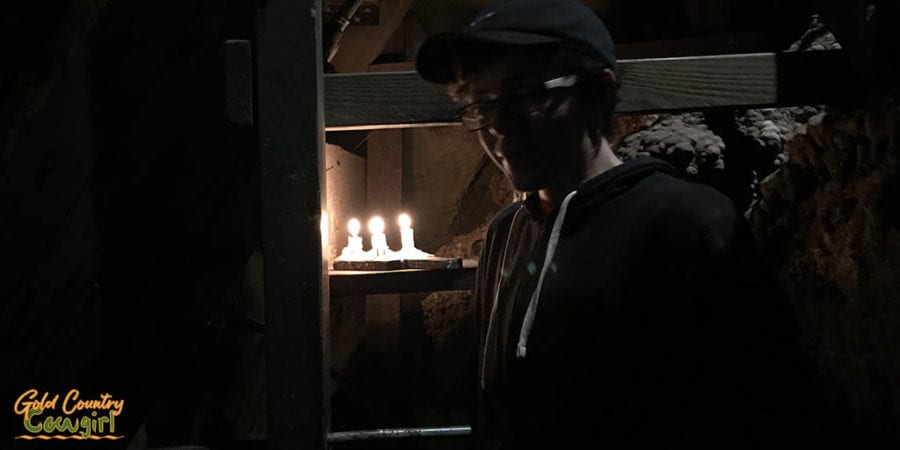 This is what the light was like for early explorers using candle boards.

You can read lots more history on their website but better to experience it in person!

The Visitor Center has interesting photos of the cave on the walls. They sell lots of cave souvenirs and other merchandise.

Like Black Chasm Cavern, Mercer Caverns also sells bags of dirt that they call mining rough. These bags contain minerals, fossils and other treasures which appear as you wash off the mining rough in the water flume. They always talk about how fun this gem mining is for the kids but I’m just a kid at heart. I think I would get a kick out of doing this. 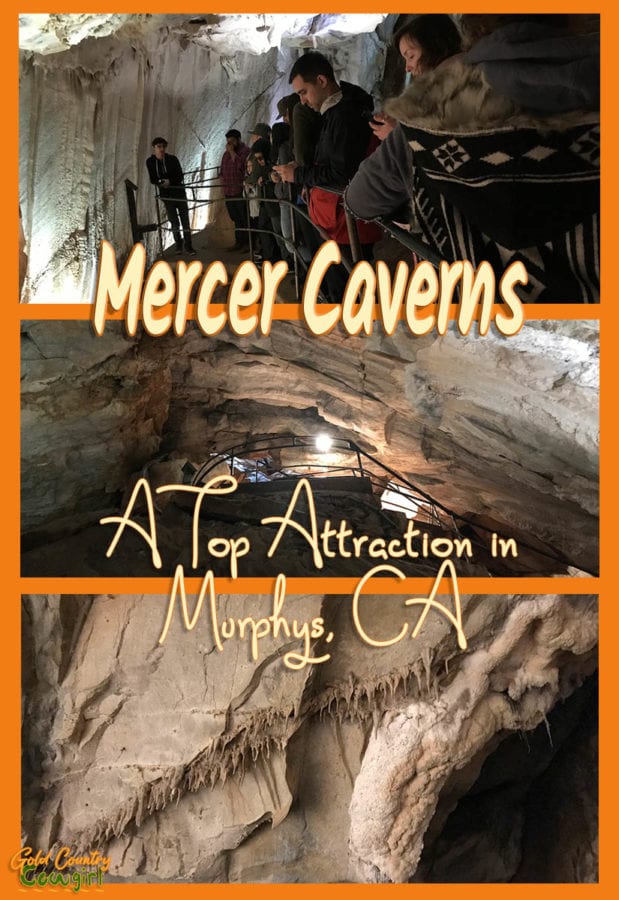 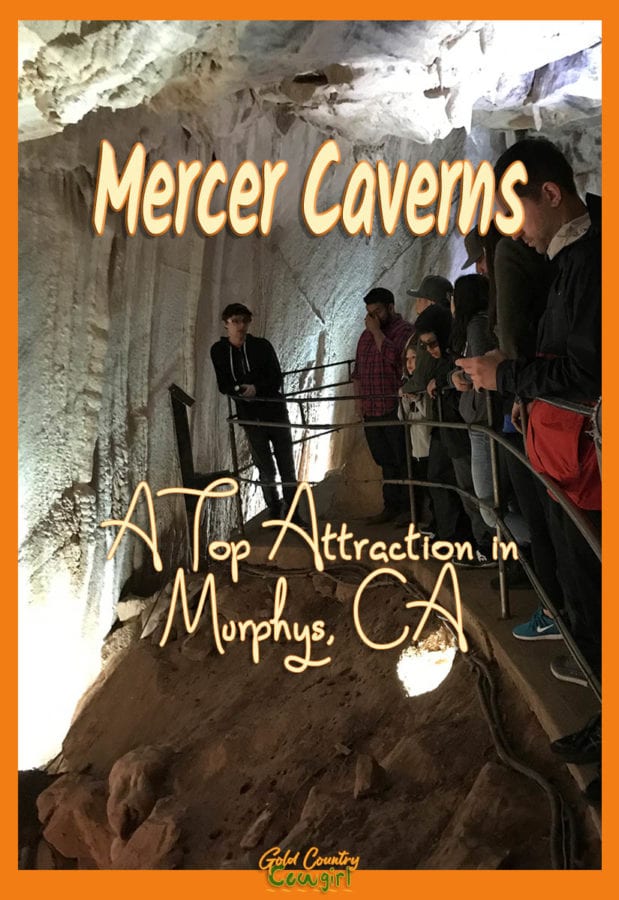 If you enjoyed this post, subscribe to the blog (in the sidebar) so you receive notifications of new posts. And if you want access to scenic stock photos and exclusive content sent to your inbox in my newsletters, sign up to my mailing list below or in the sidebar. These are two separate subscriptions, but don’t worry, I won’t clutter your inbox.