Animal Enrichment at the Sacramento Zoo

I have always loved going to the zoo. When I lived in Southern California, I went to the San Diego Zoo and the Wild Animal Park frequently. Even though it was about 90 minutes away, I had season passes some years. When Kelly told me she saw a special animal enrichment event coming up at the Sacramento Zoo in celebration of Valentine’s Day, I said I was definitely in. 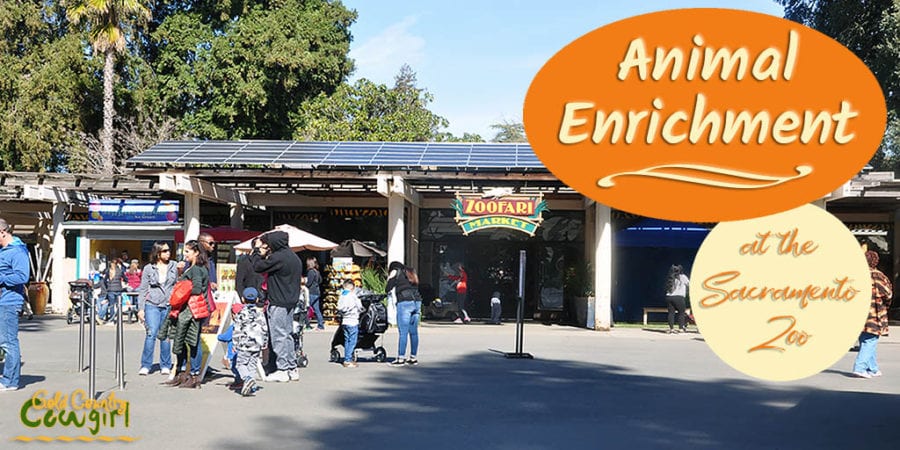 It has been raining here almost nonstop for weeks so we were quite lucky to have a beautiful, sunny day for our outing. The Zoo was very easy to get to but I thought the entrance was a little hidden as we almost drove past it. There didn’t seem to be an official parking lot, at least not one we saw, so we parked on the lovely, tree-lined street along with everyone else. The Zoo entrance was just a short walk. If I had done more research ahead of time, I would have known that the Zoo is in William Land Park and that parking is indeed on the street.

Admission to the zoo is very reasonable but be sure to budget for the extras like the zoo train, carousel and feeding the giraffes, especially if you have several children in tow. Each one is an additional charge. General admission currently is $14.95 and $9.95 for children. 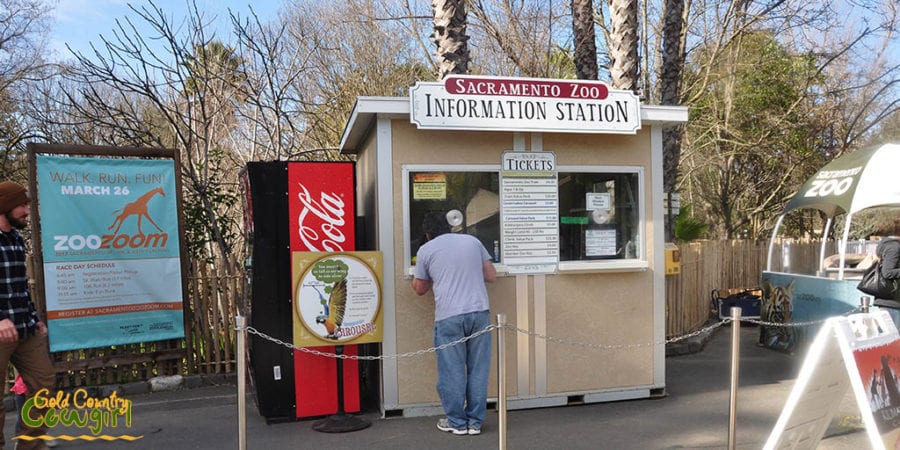 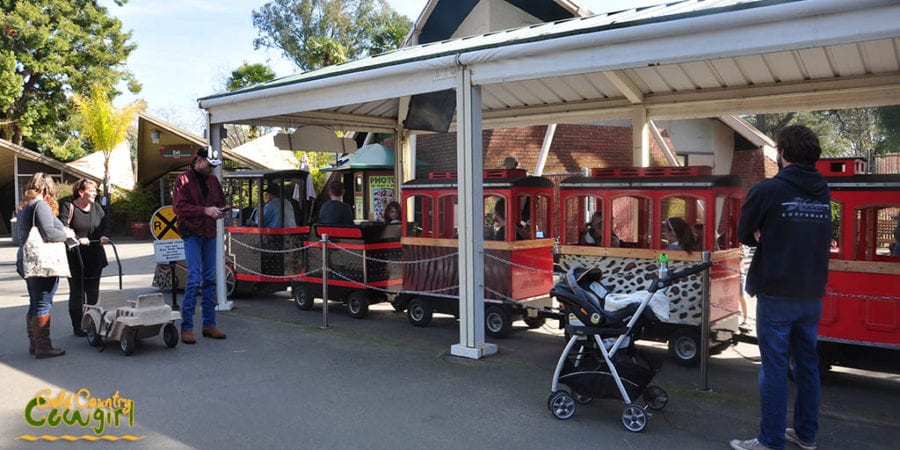 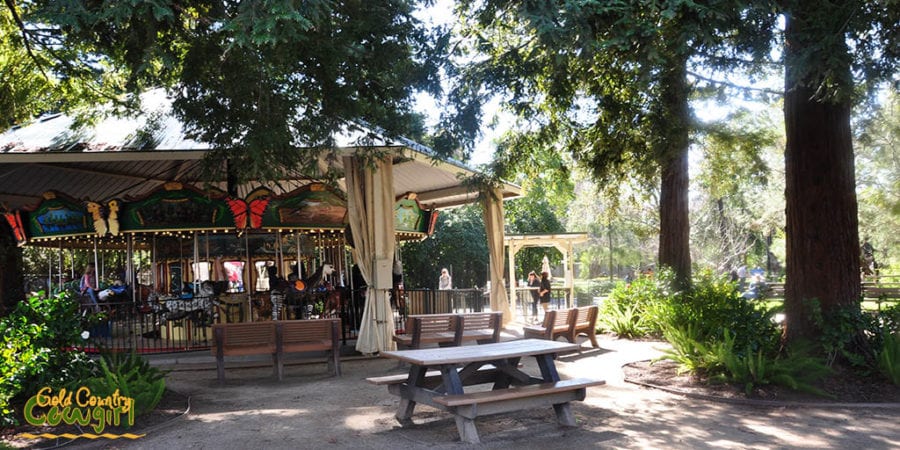 Once inside the zoo, we got a schedule of the animal enrichment times. They were planned throughout the day, almost every half hour, with a different animal each time.

We got there just in time for the African lions. I couldn’t get a good photo but we were all amused when the female lion took both of the enrichment boxes into her area and the male quietly walked away.

Some of the animals were more into the enrichment than the others. A zoo keeper did his best to get the Abyssinian ground hornbill to cooperate for a photo. He kept moving the box and tried bribing with worms but the bird just kept running from side to side watching the crowd, showing no interest at all in his heart shaped box.

We really wanted to see the orangutans so while we waited for that we walked around the rest of the zoo. The Sacramento Zoo is much smaller than what I am used to but it still has many nice exhibits. 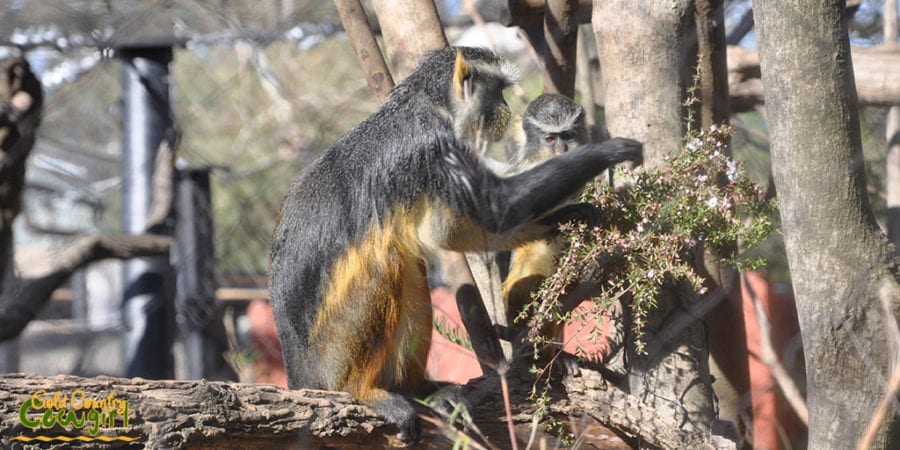 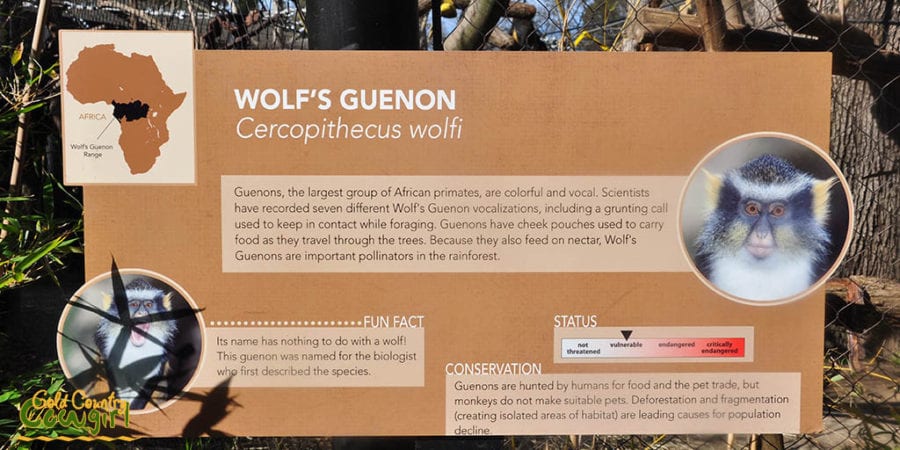 I always love the giraffes. Their size alone makes them so awesome to watch and easy to photograph. 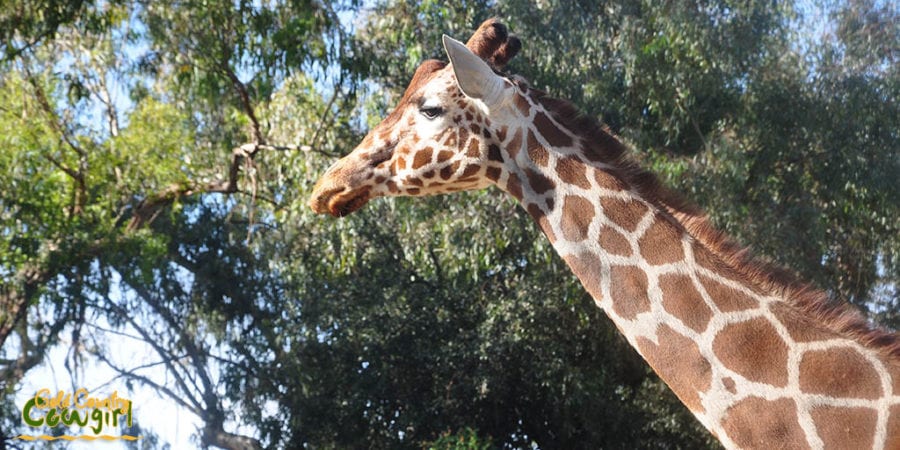 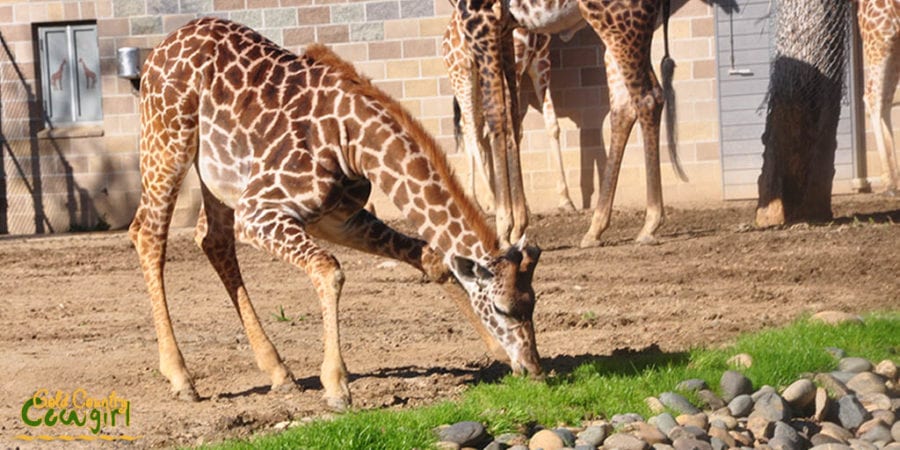 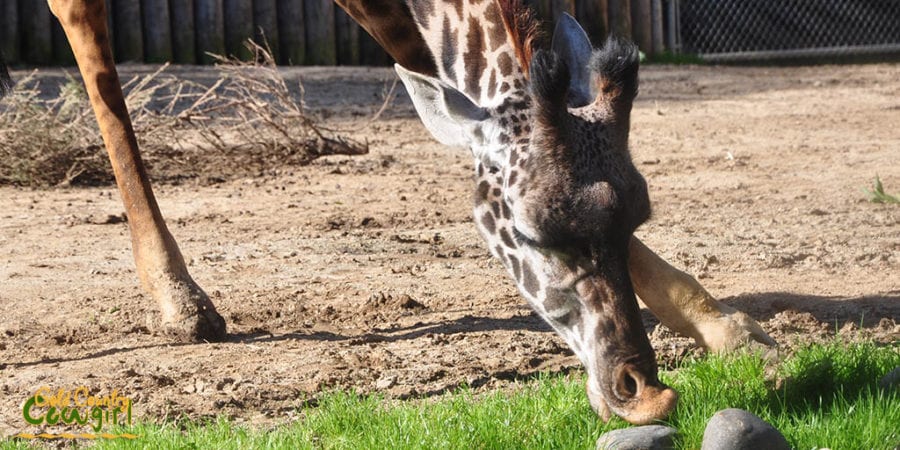 The brightly colored flamingos are also a favorite for photographers. It took a while to capture a couple with their heads out from under their wings. 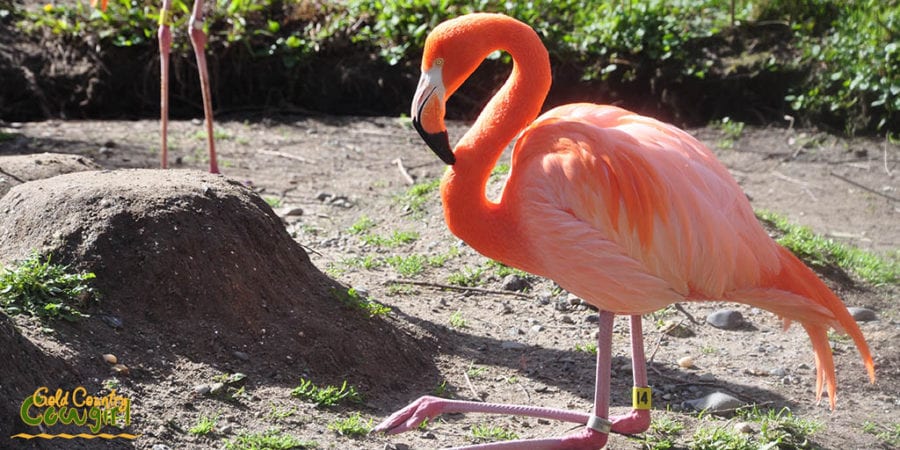 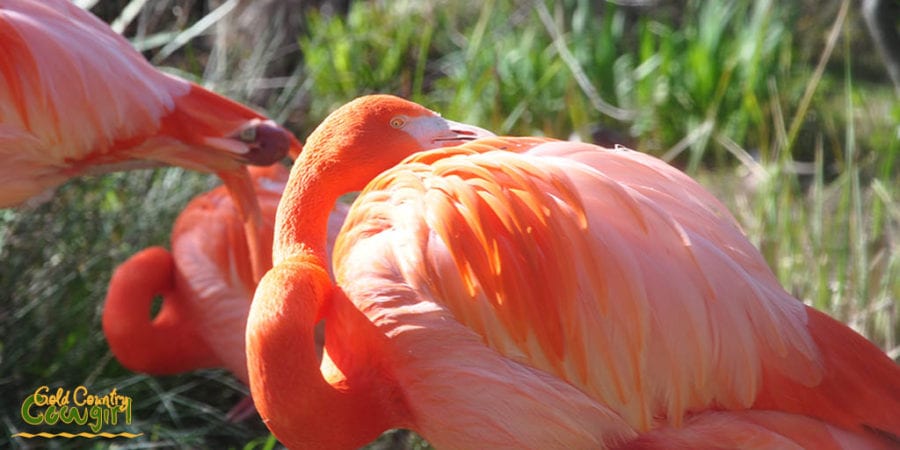 I was disappointed that the rare felines were hiding so well that we couldn’t even get a glimpse of them. 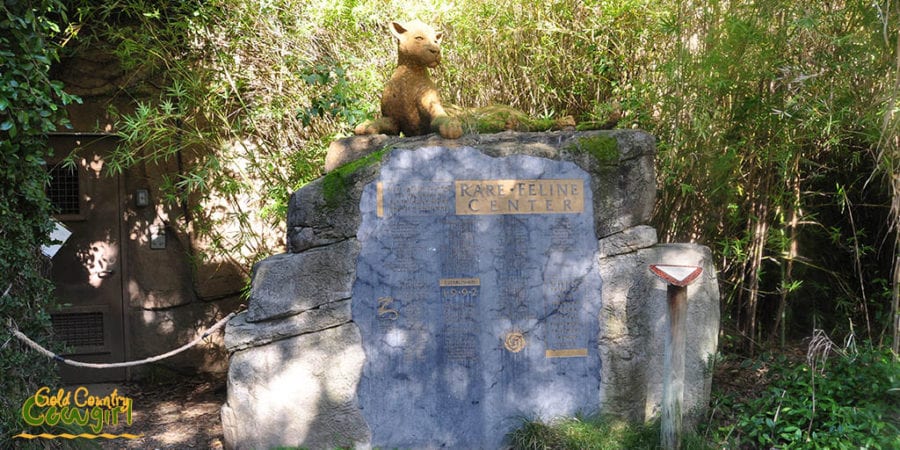 I know many people feel that wild animals belong in the wild and not in zoos like the Sacramento Zoo. In a perfect world, I would totally agree. However, humans are destroying so much natural habitat of wildlife that if it were not for accredited zoos dedicated to conservation, there would be many more animals extinct than there already are.

Orangutans of the Sacramento Zoo 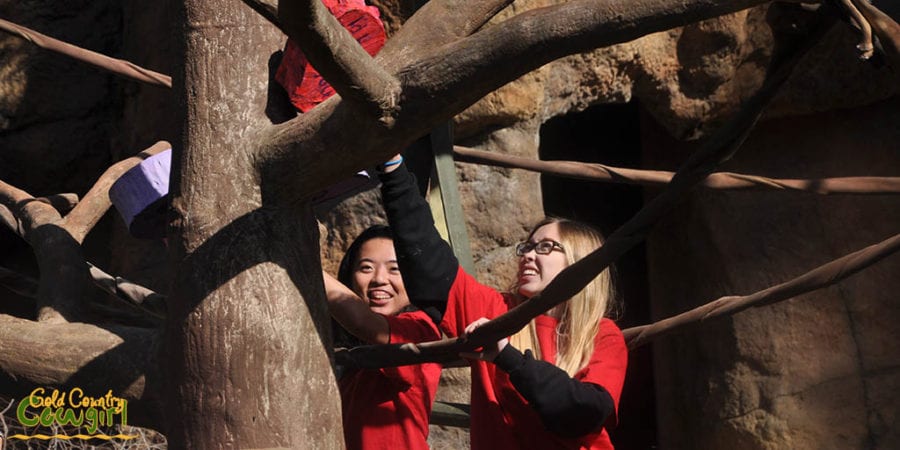 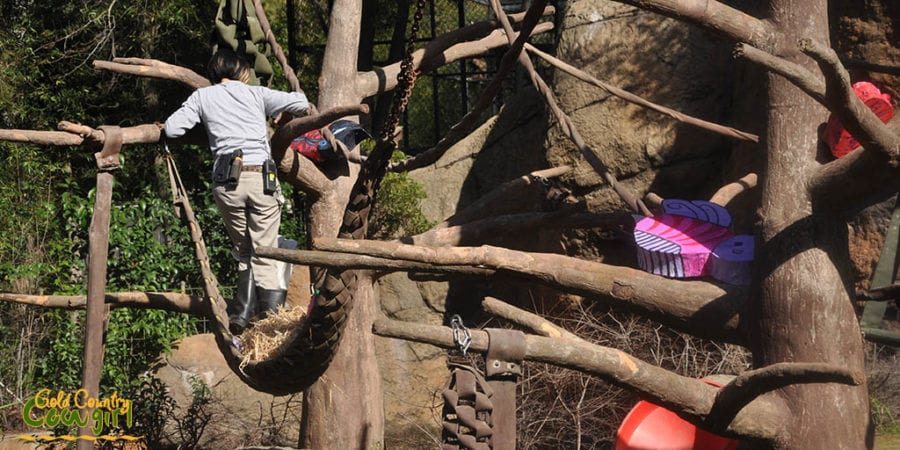 The orangutans put on quite a show and everyone loved it. 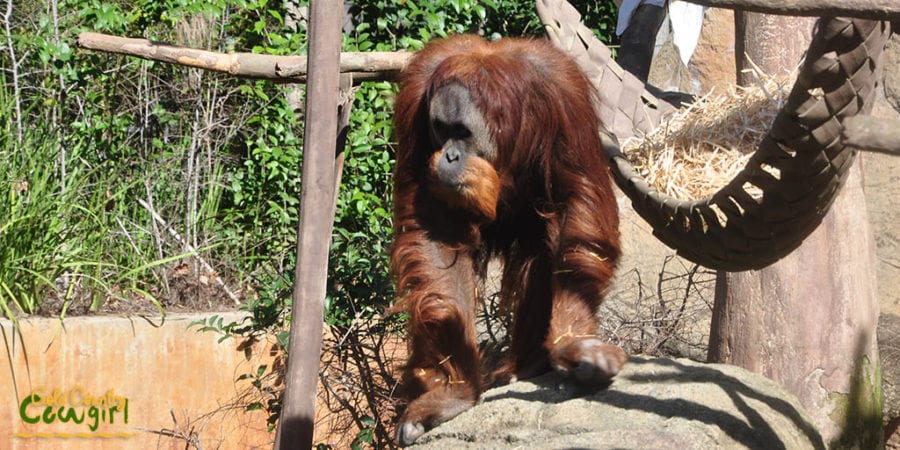 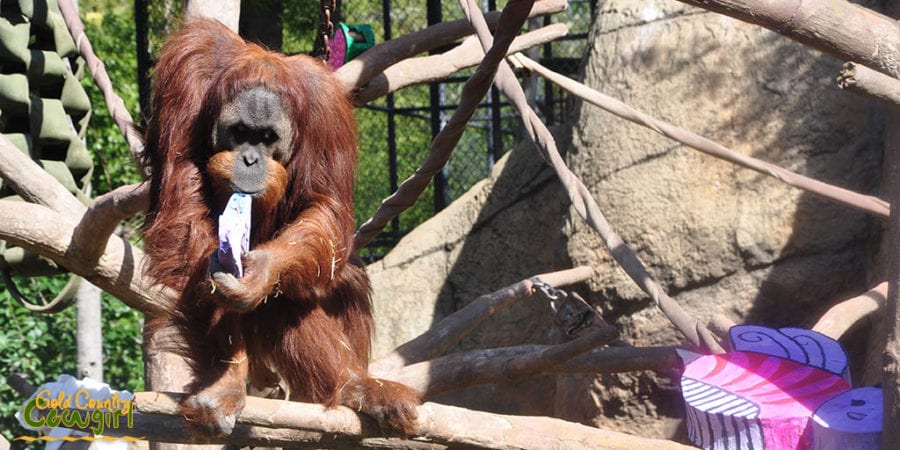 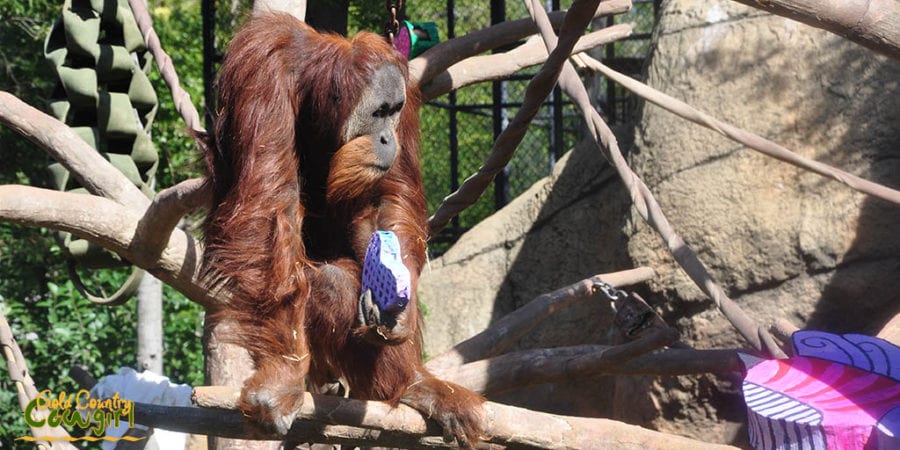 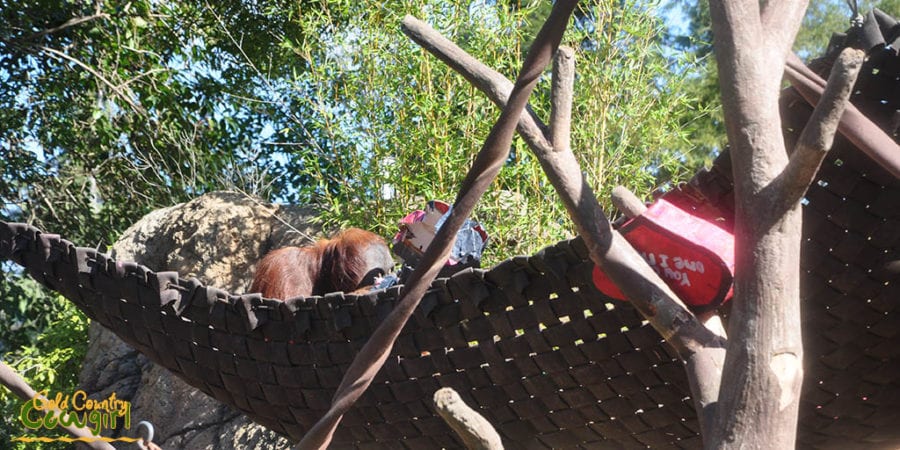 Eventually, the male orangutan went up into the tree branches, picked up two large boxes and climbed into a hammock at the top of the enclosure. 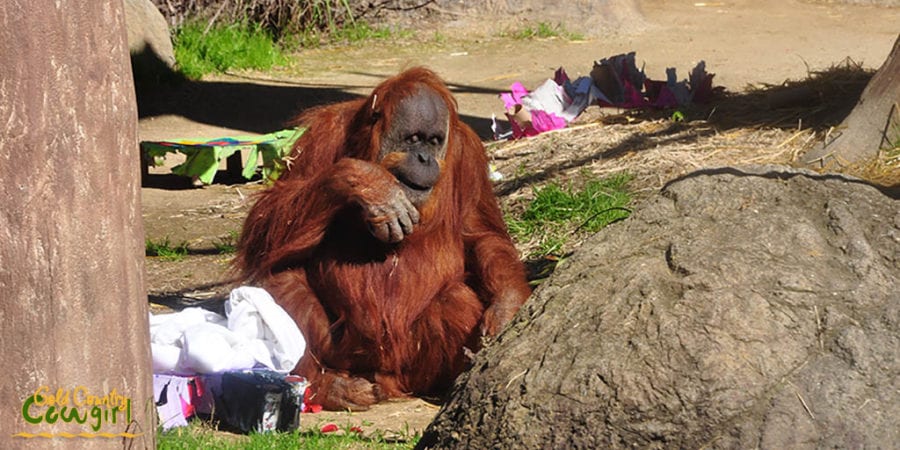 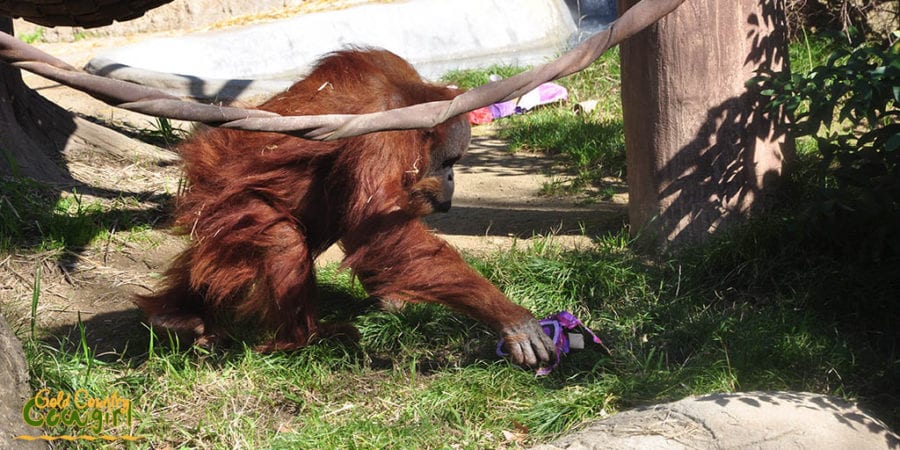 The older female stayed on the ground looking for any treasures that had been missed when they opened the other boxes.

If you get hungry walking around the zoo, there are two places to eat. The Kampala Cafe serves lunch items like sandwiches, burgers and salads. Savannah Snacks has ice cream, drinks and other snack items. 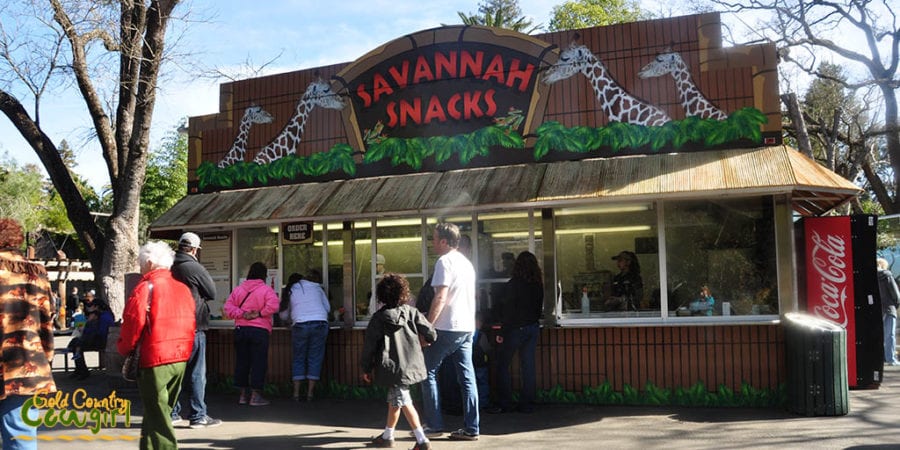 The Sacramento Zoo has lots of events and private parties. Be sure to check their website before you go to be sure they are open and to see if they have anything special going on. 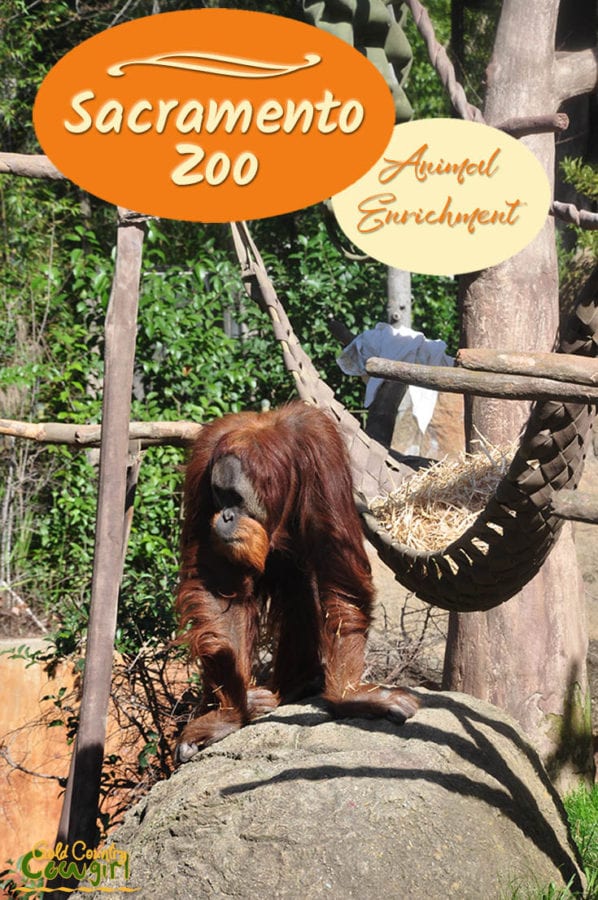