Zoos may be a controversial issue for some but I absolutely love them and appreciate what they do. I love being able to see animals I would never otherwise see in the wild and that may, in fact, not exist in the wild in the near future. I won’t apologize to anyone who doesn’t agree with me for feeling this way. So, if you feel strongly that animals should only exist in the wild until humans wipe them off the face of the earth, please just pass this post on by. I’m going to tell you about the Gladys Porter Zoo in Brownsville, Texas, and the important work they do. 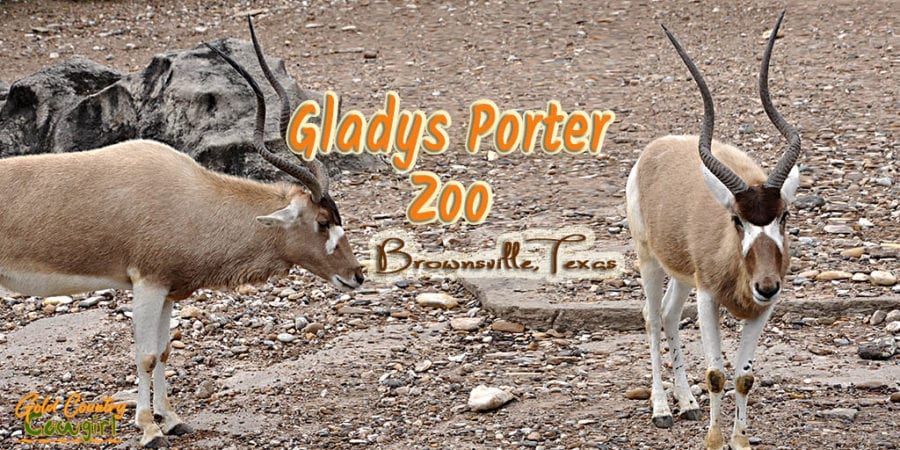 I grew up in southern California and visited the San Diego Zoo and Safari Park quite often. In my opinion, it has to be one of the best zoos in the world, so every zoo I visit has a lot to live up to. I visit zoos, sanctuaries and animal parks whenever and wherever I can.

The Gladys Porter Zoo is in the middle of town but easy to get to and easy to find. There is a fair amount of parking, which costs $5 when you exit.

The first thing that stood out for me when I was reading about the Gladys Porter Zoo in Brownsville is that when it opened in 1971, it was one of the first zoos in the country without barred cages. Most of the animals in this 28-acre zoo are displayed in open settings that are similar to their native habitats. This was always the best part to me at the San Diego Zoo. The Gladys Porter Zoo has more than 1500 animals, representing nearly 400 species, and is known for its success in breeding endangered wildlife.

When Gladys Porter Zoo in Brownsville opened in 1971, it was one of the first zoos in the country without barred cages. Click To Tweet

Gladys Porter Zoo is owned by the City of Brownsville and is operated by the Board of Directors of the Valley Zoological Society and has around 400,000 visitors annually. 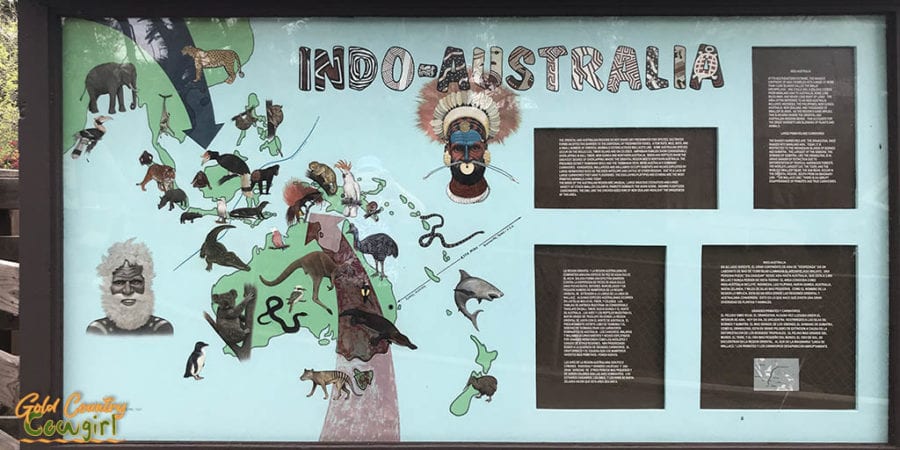 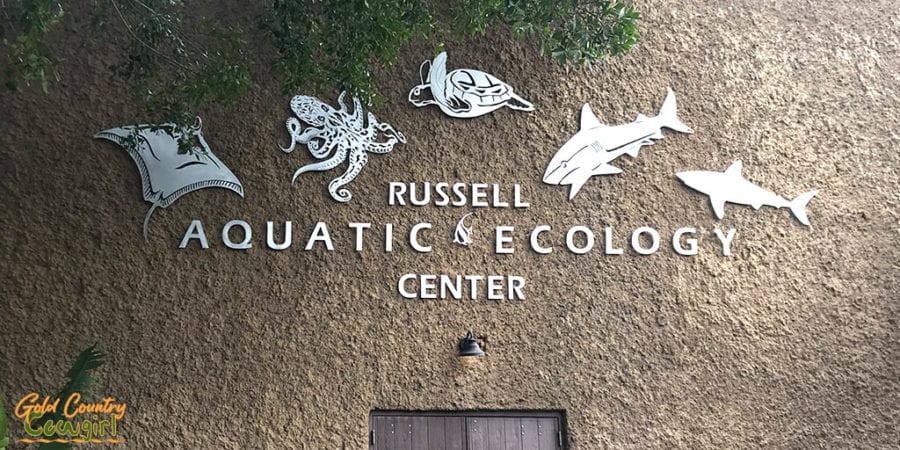 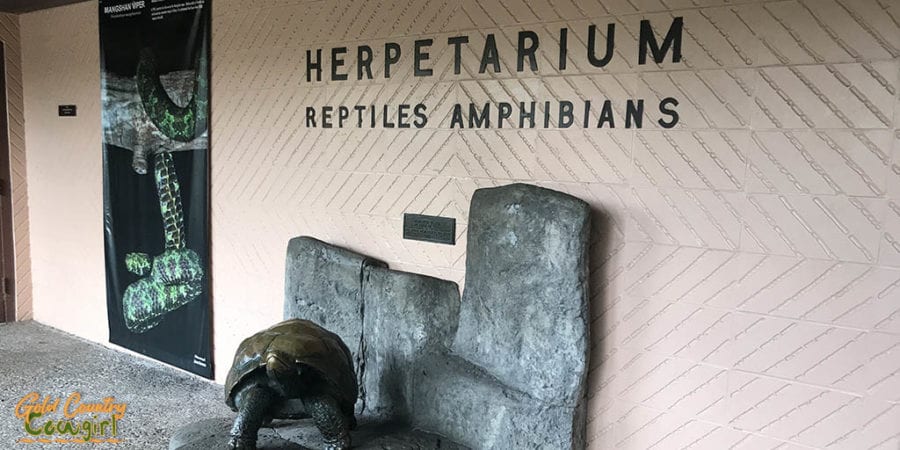 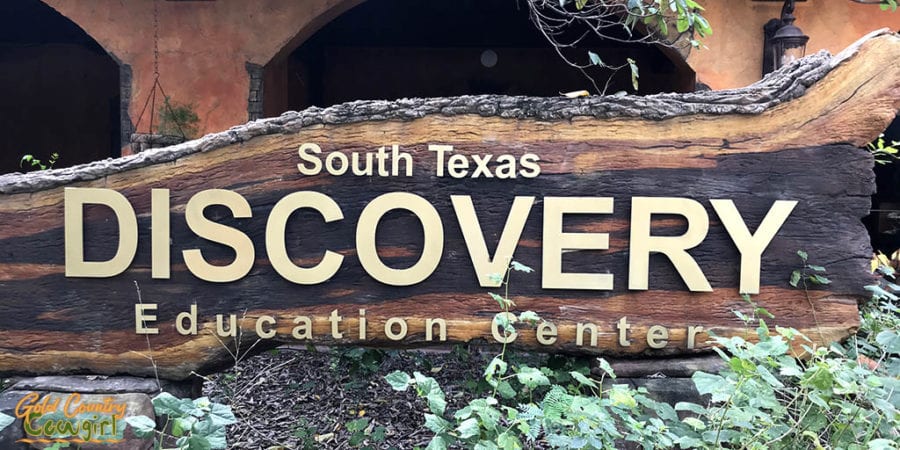 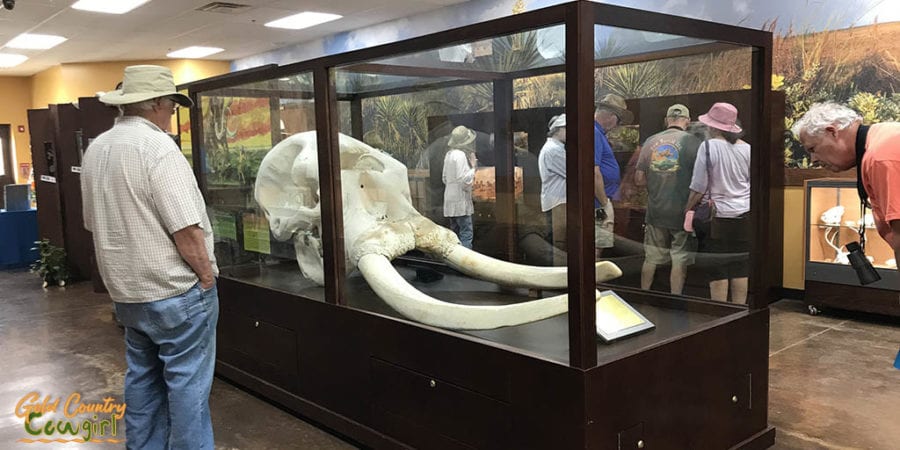 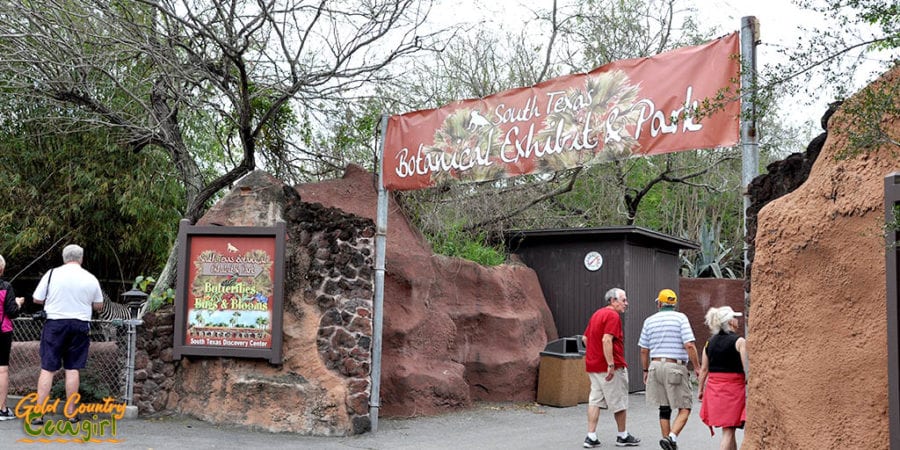 Highlights from my Visit to the Zoo

Many of you know that I’m a few years beyond qualifying as a senior citizen, yet in all that time, I have never fed a giraffe. I’ve had the opportunity at a few other zoos but it was always fairly expensive, usually around $10, and very crowded with long lines. Giraffe feeding here was only $3 and there were only a few people in line so I jumped on the chance. I asked one of the docents to take my picture. She got a great shot!

You would think that after more than two thirds of a century of traveling and visiting zoos, at some point I would have fed a giraffe. But no. Today was my first time. This is the dominant male giraffe at the Gladys Porter Zoo in Brownsville, Texas, but he was quite the gentleman. That tongue is amazing. @gladysporterzoo #giraffe #feedinggiraffes #giraffefeeding #myfirsttime #zoo #gladysporterzoo #brownsville #brownsvilletx #travelbloggerlife #travelblogging #GoldCountryCowgirl

Giraffes are one of my favorite animals to photograph. You can see more in my post about the Sacramento Zoo. 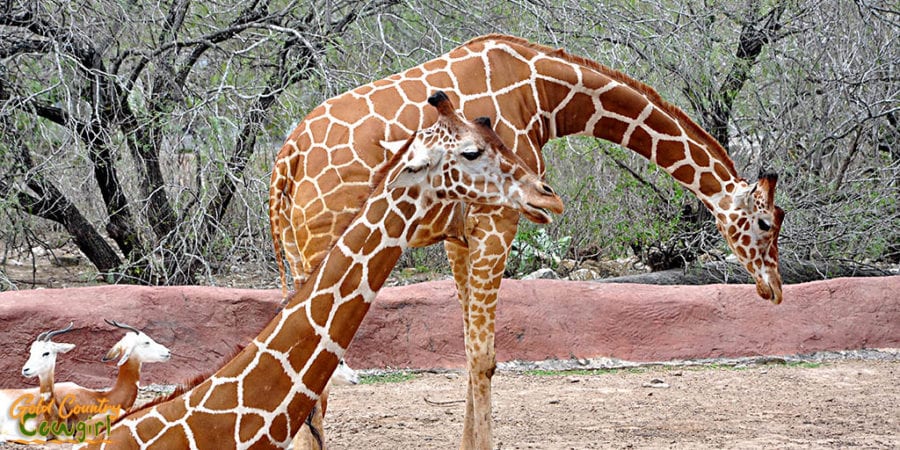 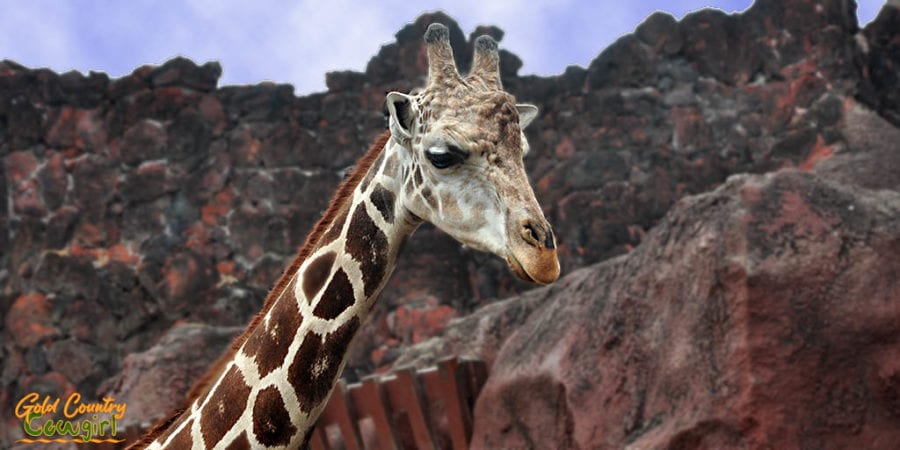 It was a relatively cool day (78 degrees) and fairly windy so the animals were pretty active when I got there in the late morning. Two of the rhinos put on quite a show for their small audience. I walked by the exhibit on my way out and they were all sleeping so I was very lucky to see this playful display earlier in the day. Be sure to watch the video below to see these guys (or girls) in action!

Did you know that a group of rhinos is called a crash? Bebop, a 5-year-old male southern white rhino, arrived at the zoo in March of 2018 and was fully integrated with the resident females, Julie and Abby, in October.

Did you know that a group of rhinos is called a crash? Meet Bebop, Julie and Abby at Gladys Porter Zoo. Click To Tweet 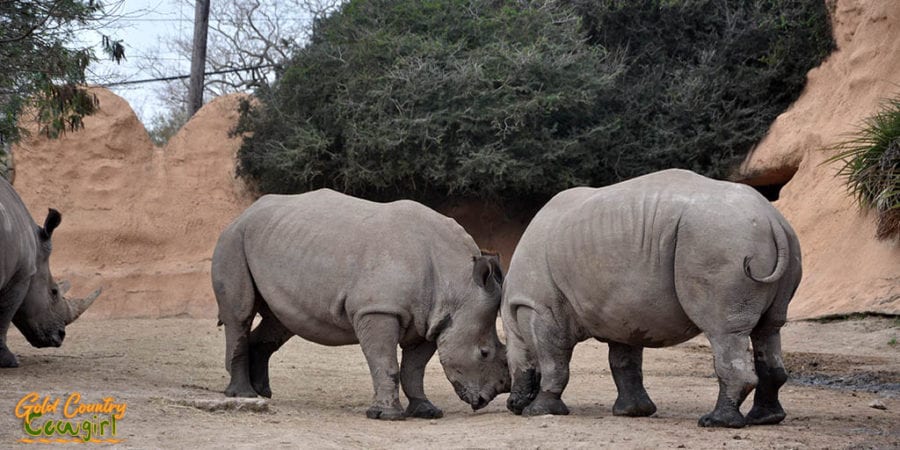 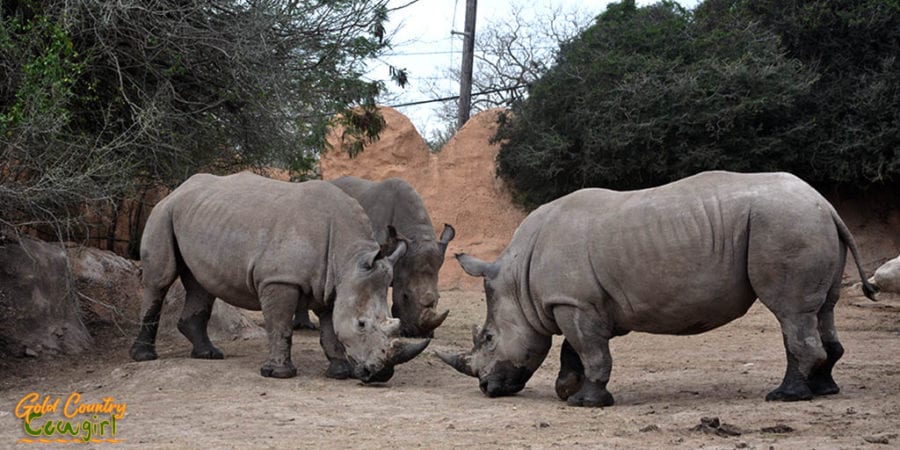 I have always fancied being a bit of a wanna-be birdwatcher so I love photographing the birds at the zoo. This charming kookaburra seemed to enjoy posing for me. The African crowned crane was always one of my favorite birds to photograph at the San Diego Zoo. 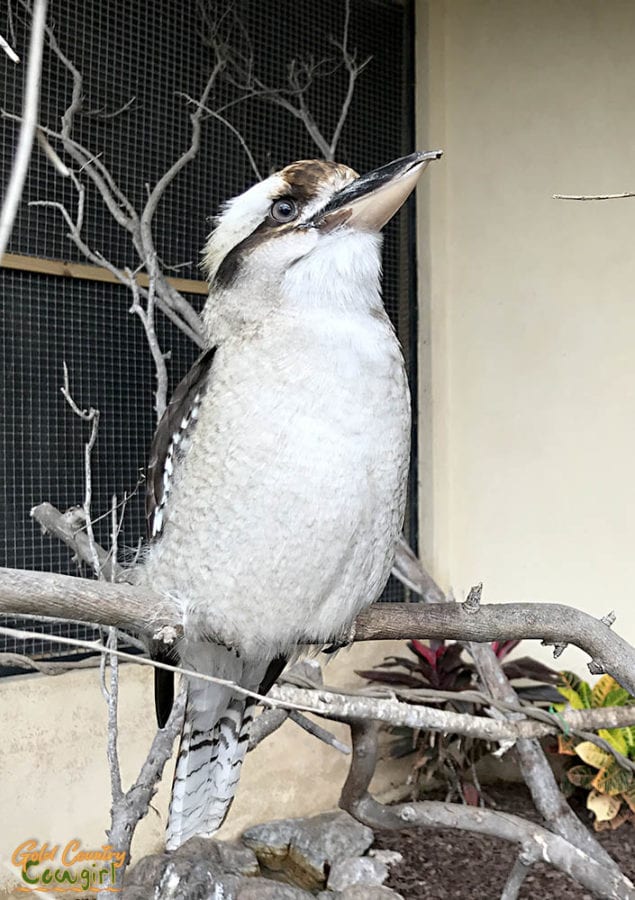 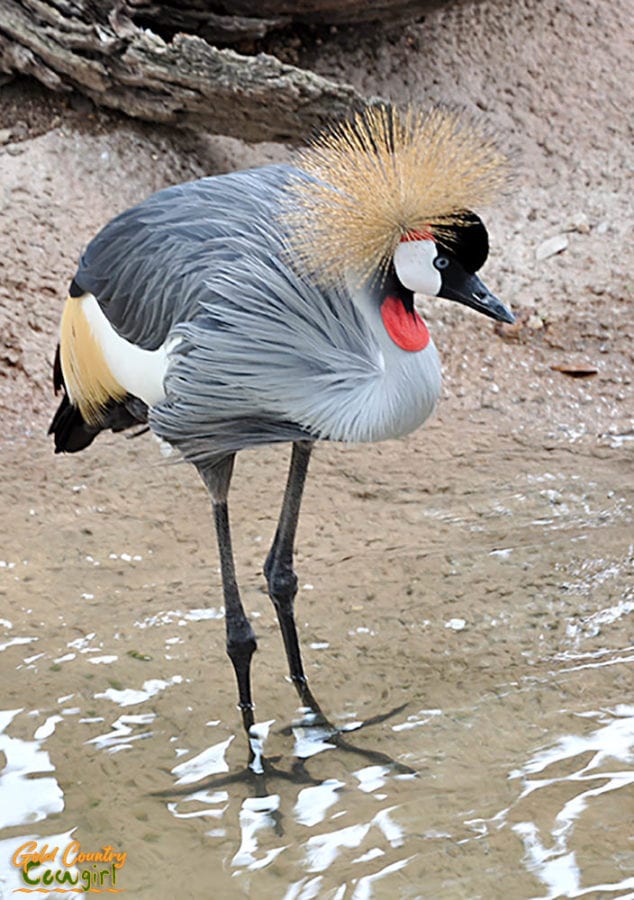 Oh, and the glorious flamingos! They are always so spectacular. 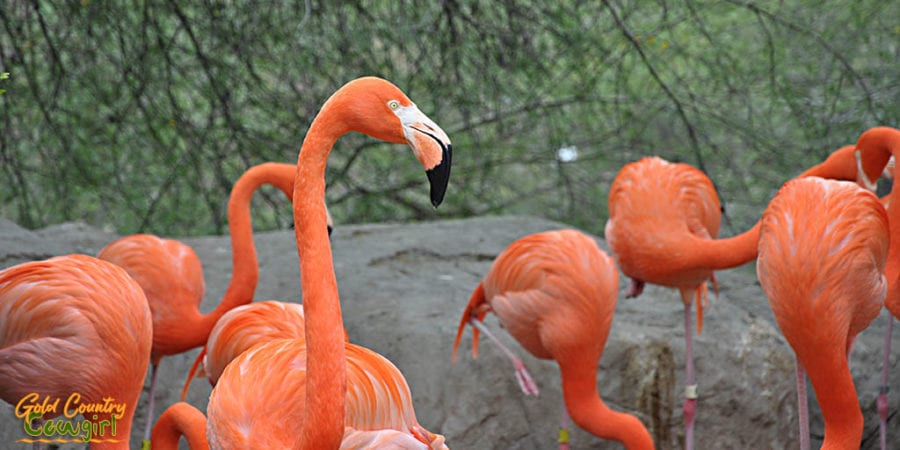 This pileated gibbon was quite a ham. He would actually come down to the end of the enclosure and pose when he saw someone pointing a camera in his direction. Clapping from the crowd got him swinging back and forth. 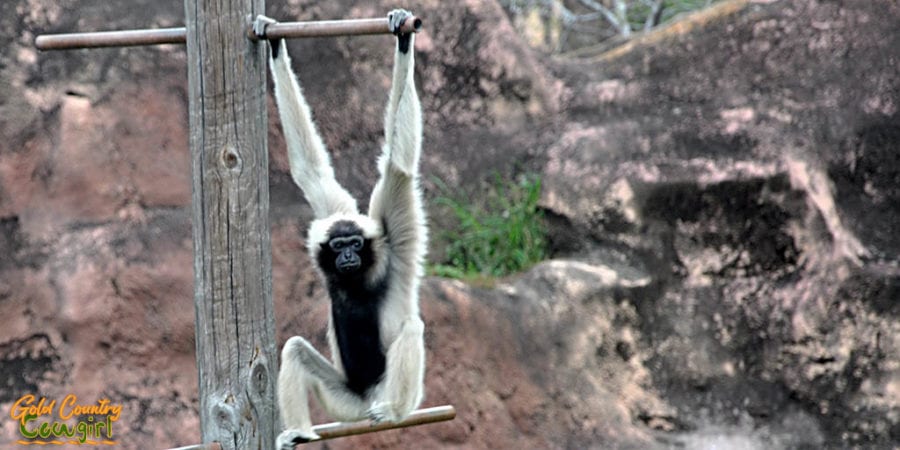 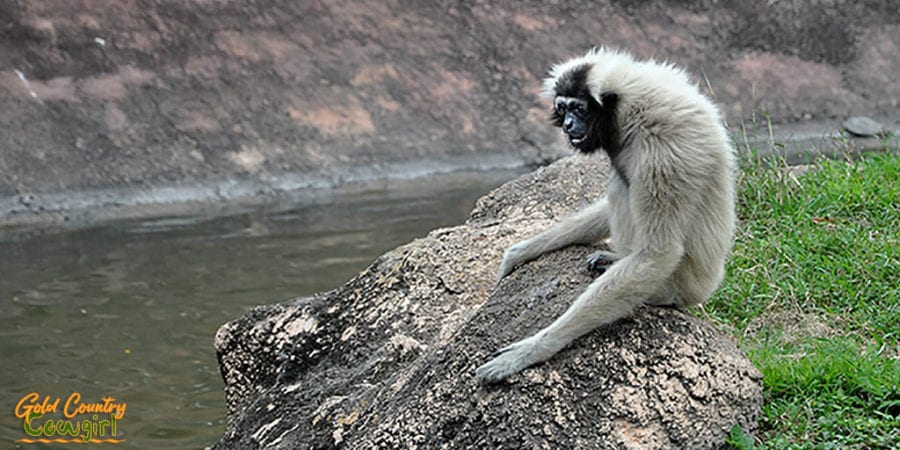 The oldest members of the three-generation Western lowland gorilla family have lived at the zoo for more than 30 years. 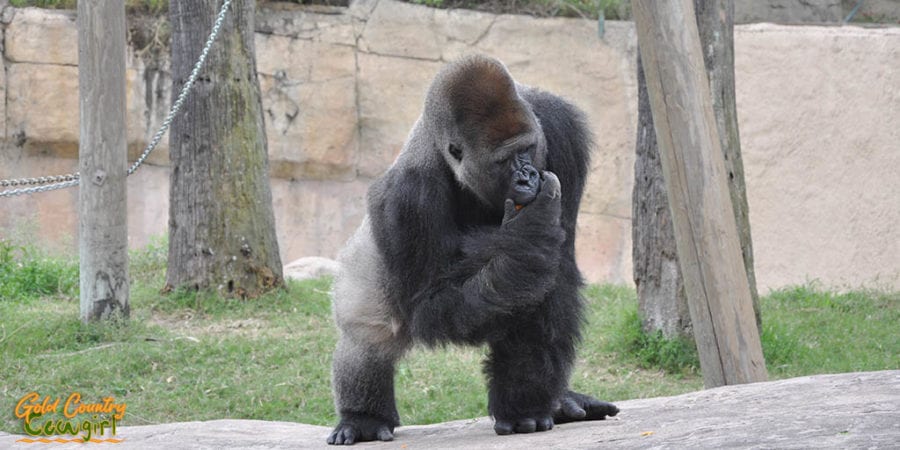 Several species of lemurs live at the zoo including the critically endangered red ruffed lemurs and black and white ruffed lemurs. 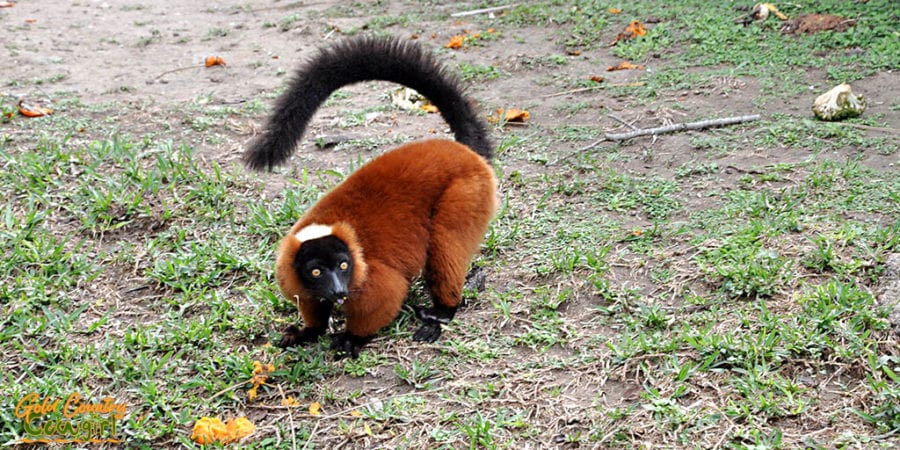 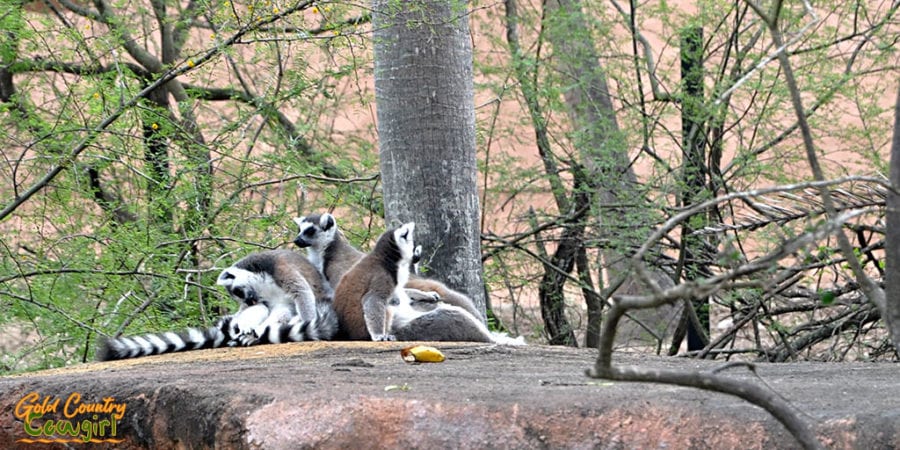 Have you ever touched a stingray? Another first for me in the Russell Aquatic and Ecology Center at the Stingray Landing Touch Tank. They really seem to enjoy it!

Have you ever touched a stingray? Visit the Stingray Landing Touch Tank at Russell Aquatic and Ecology Center. Click To Tweet 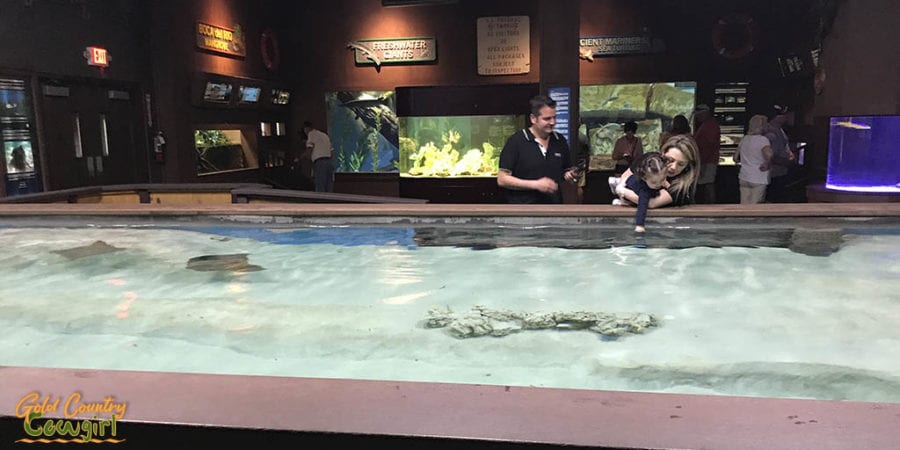 Be sure to check out the video to see lots of these critters in action.

Why Zoos Like the Gladys Porter Zoo are Important

The Gladys Porter Zoo has been an accredited member of the Association of Zoos and Aquariums (AZA) since 1978 and participates in their Species Survival Plan program to help ensure the survival of selected wildlife species. It coordinates its efforts of breeding rare and endangered species with other zoos to contribute to maintaining a genetically sound captive population. They contribute funds to other conservation and research programs in the field. 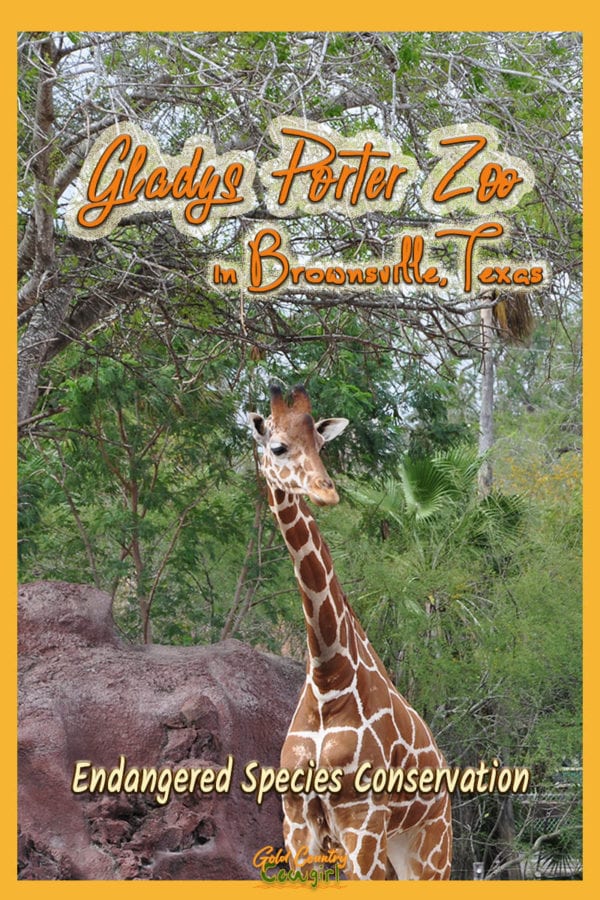 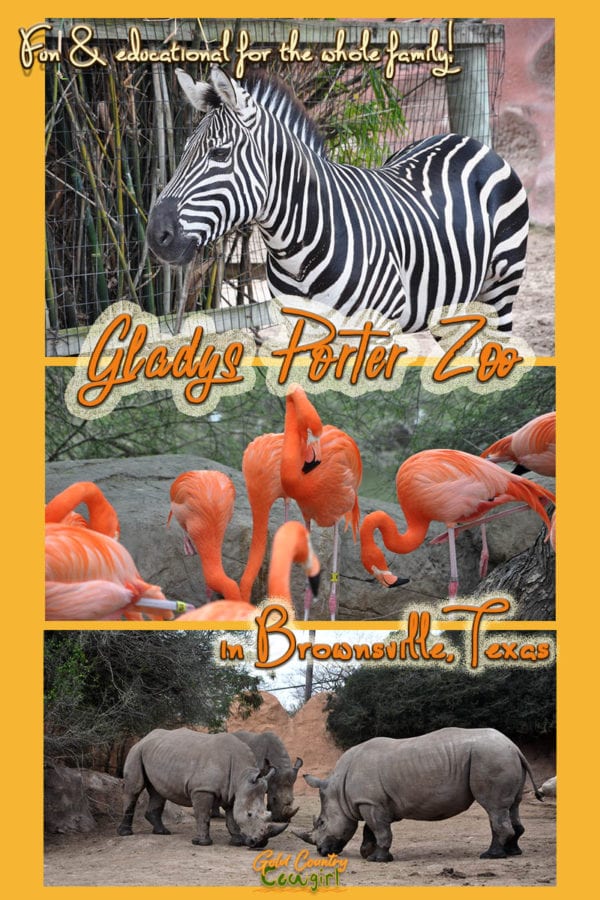 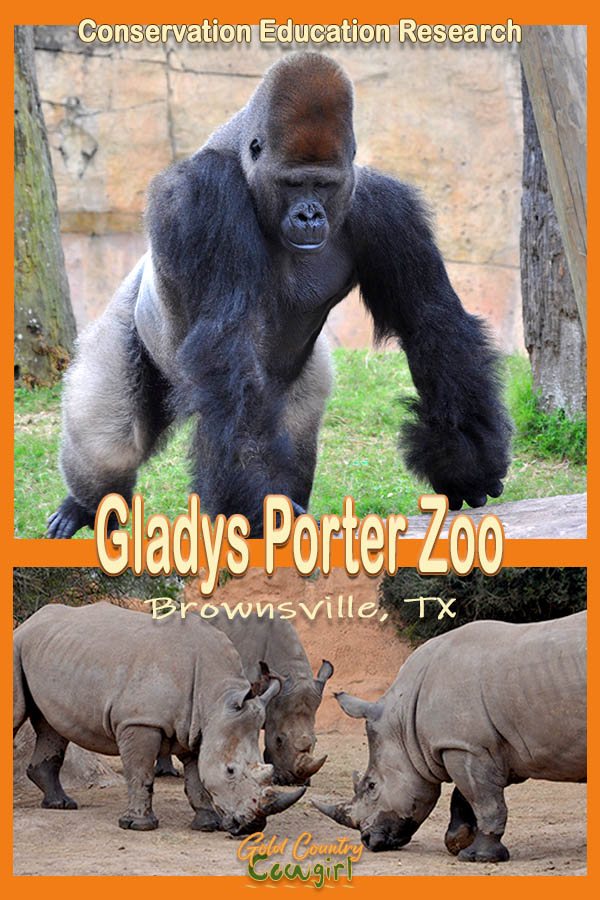 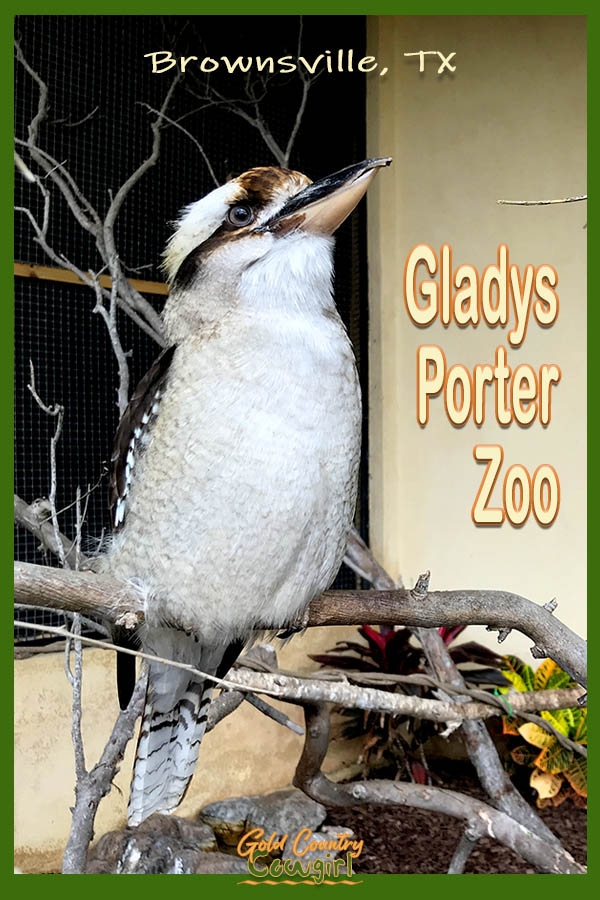 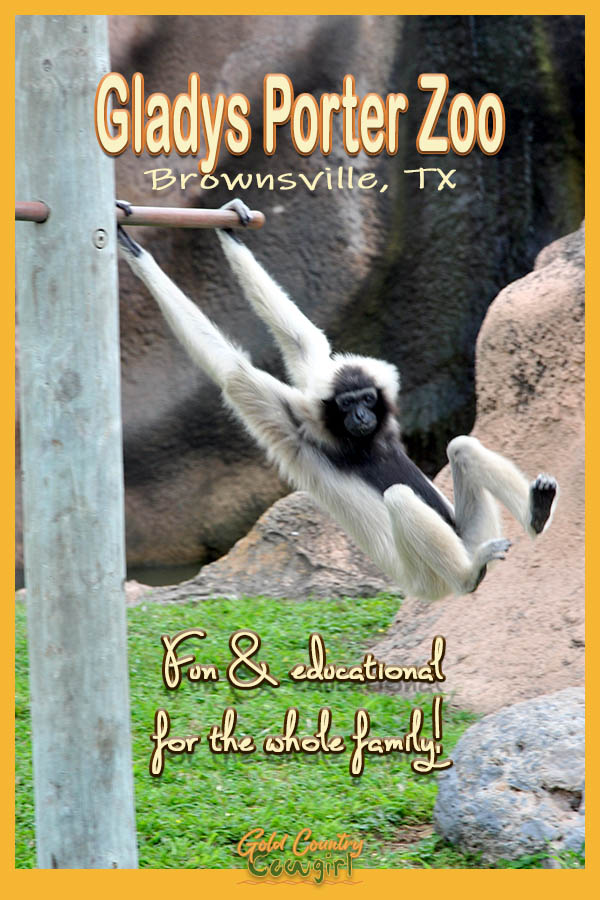