Mushrooms are one of those things that I think you either love or hate. Even if you hate them, though, learning about them is pretty fascinating. When I contacted Dragon Gourmet Mushrooms in Sloughhouse, CA, and asked if they could do a tour of the mushroom farm for my cooking group, the Saucy Sisters, I was pretty excited when owner, Ryker, said yes. 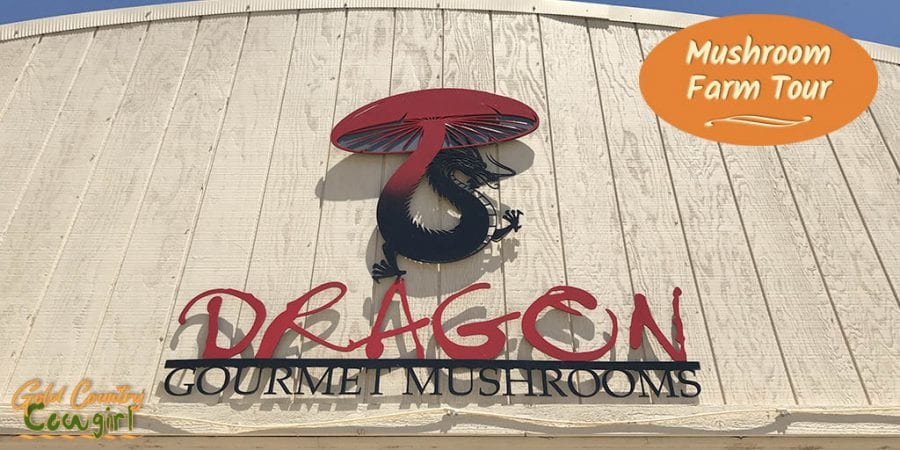 We were in the middle of a heat wave the day we went, with the temperature somewhere over 100 degrees, but eight of us were dedicated enough to brave it. Ryker and Mushroom Ninja Valarie seemed genuinely happy to have us there to share all about mushrooms with us.

Ryker told us about how he got started as a mushroom farmer and a lot about the science of growing mushrooms. It’s very different from growing plants in soil in your garden! Do they really grow in “you know what” in the dark? Not at Dragon Gourmet Mushrooms, at least. 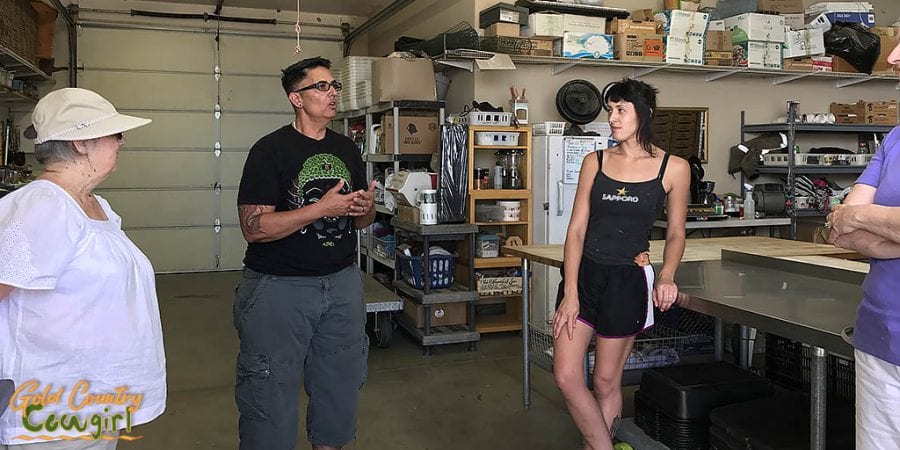 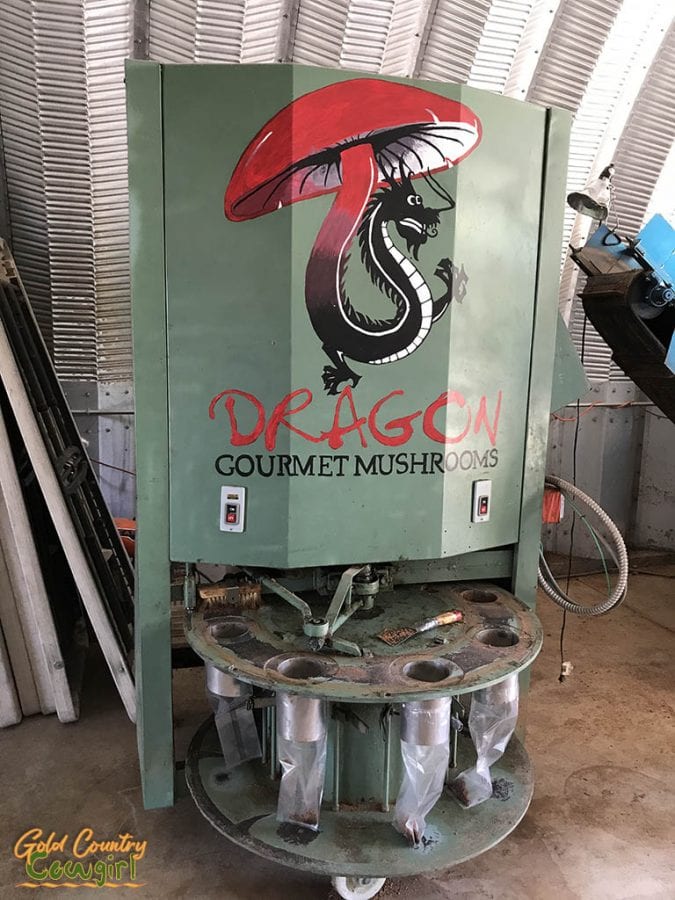 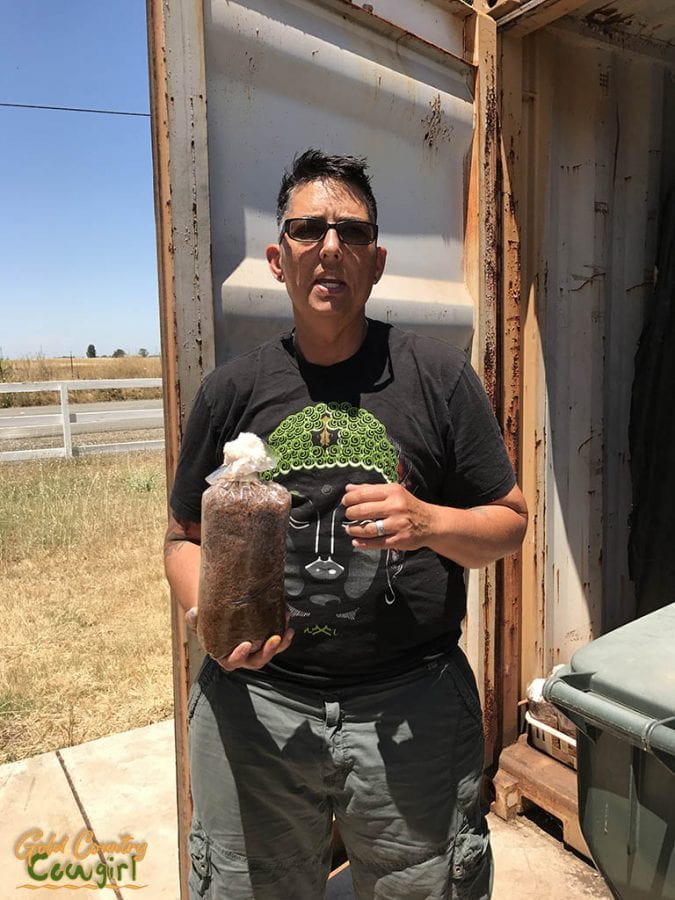 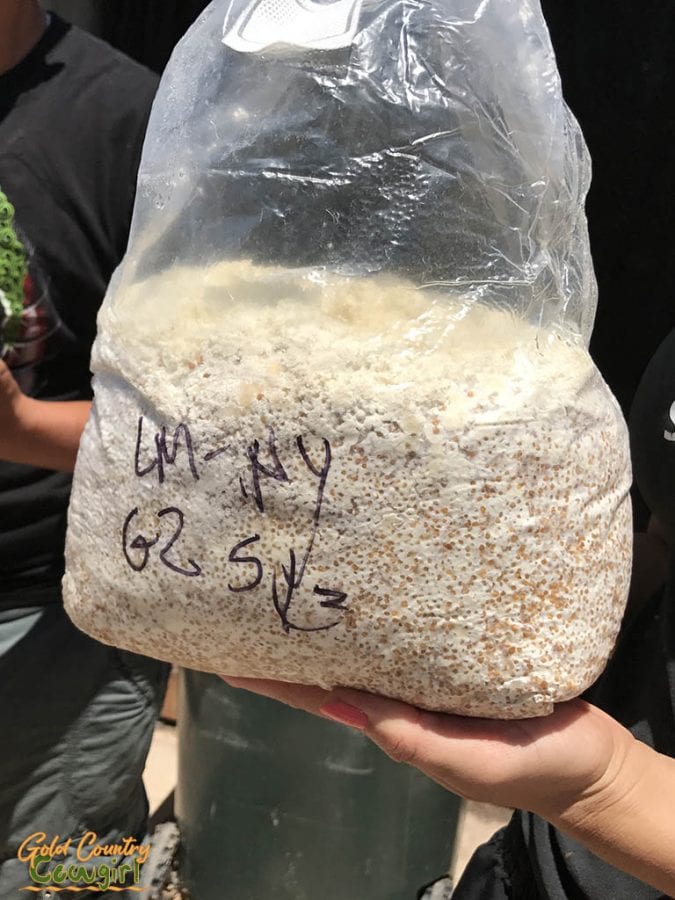 Dragon Gourmet Mushrooms is a sustainable and environmentally conscious business. They produce their mushrooms using untreated hardwood sawdust and wheat bran – no manure. Since the mushrooms grow through the top of the bag out of a sterile medium, there is nothing to “brush off” before you use them. 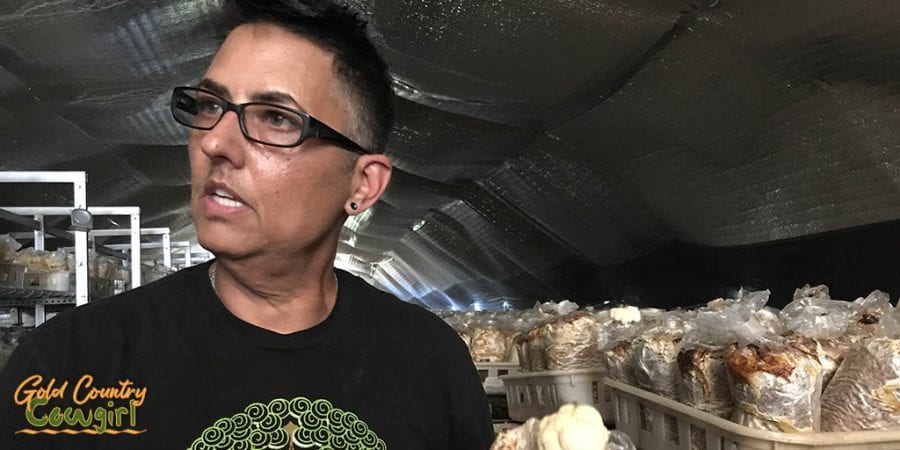 They grow several varieties of mushrooms at the farm. The mushrooms grow on shelves in the hoop houses. Some mushrooms prefer to grow with the bags sitting upright, others with the bags laying on their sides, like the blue oyster. 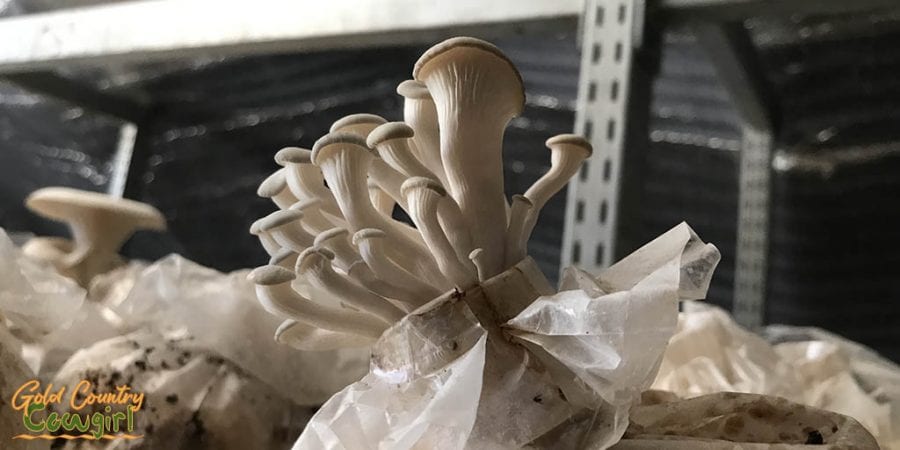 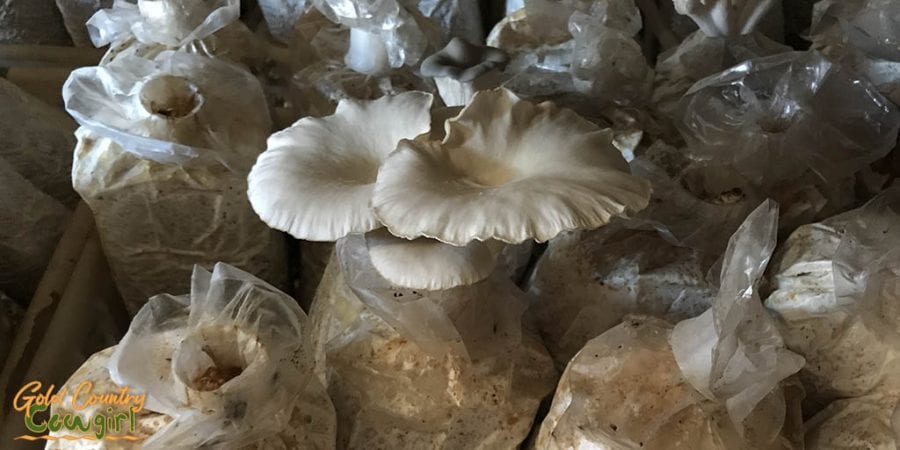 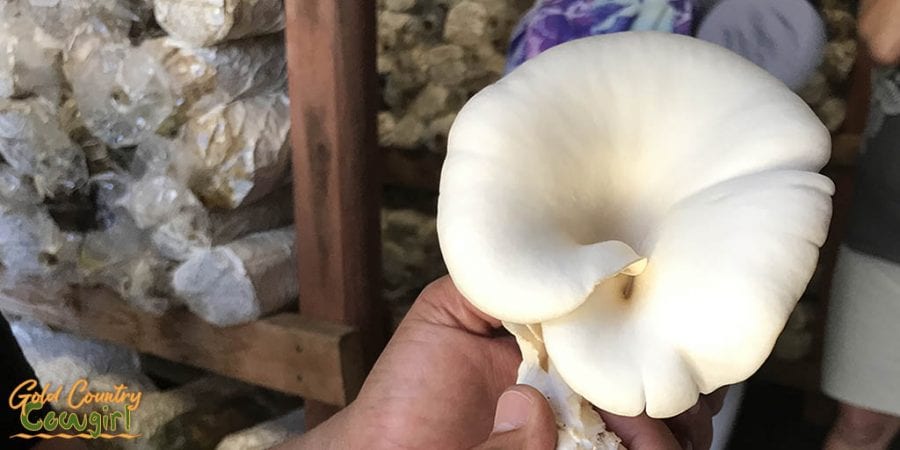 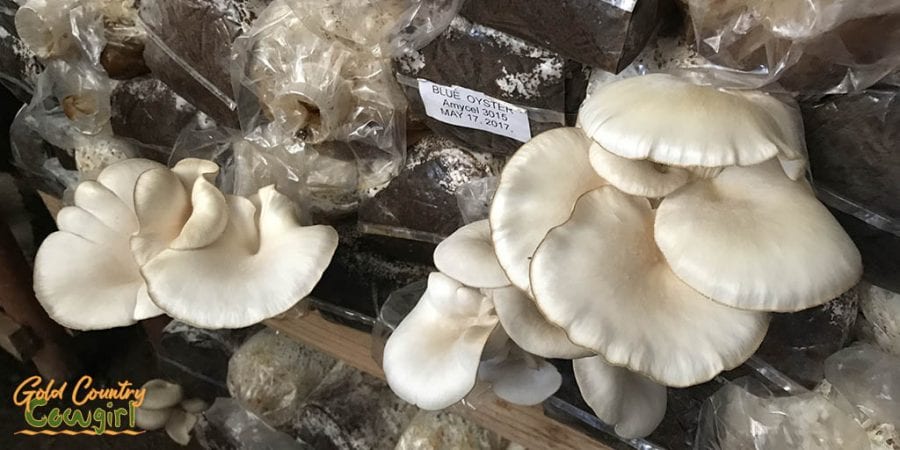 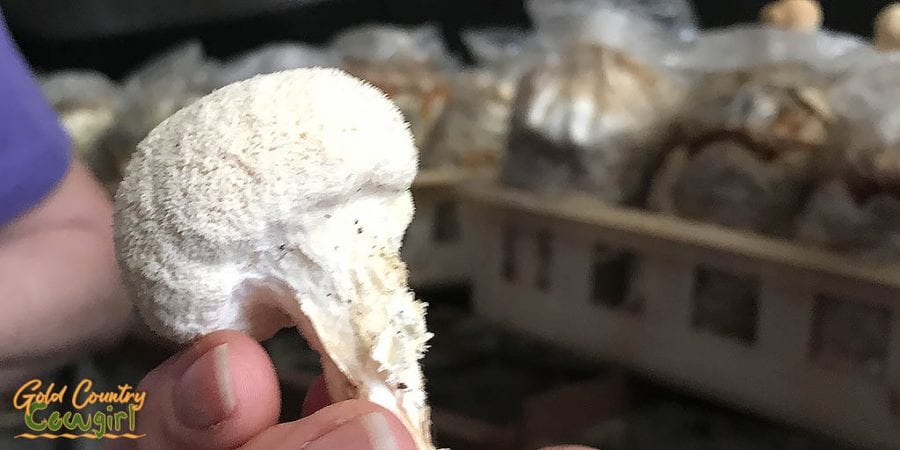 The Lion’s Mane mushroom looks like a fuzzy golf ball 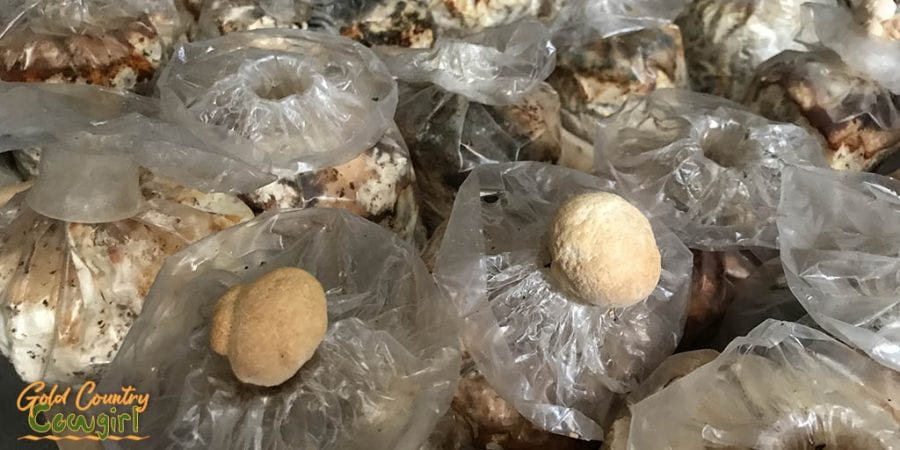 They had some great combo packs ready for us to purchase as well as some other mushroom farm memorabilia. I think everyone took home at least one combo pack. 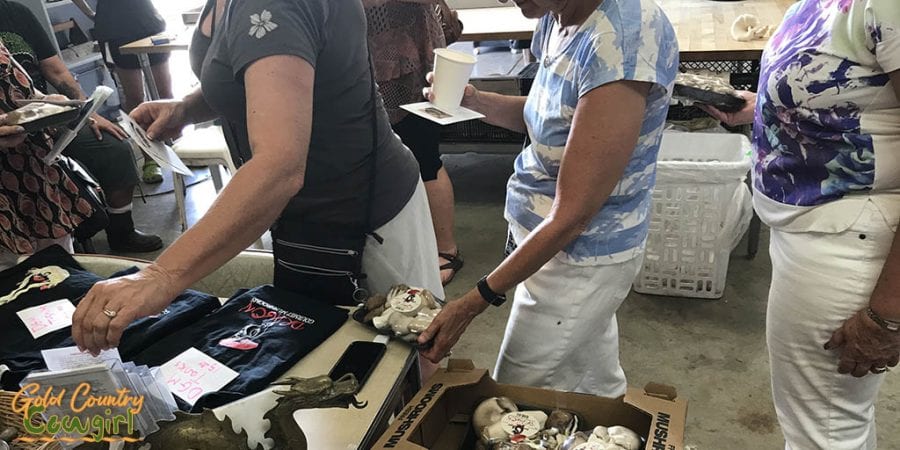 A couple of people wrote the names of the mushrooms on the package to remember them later. 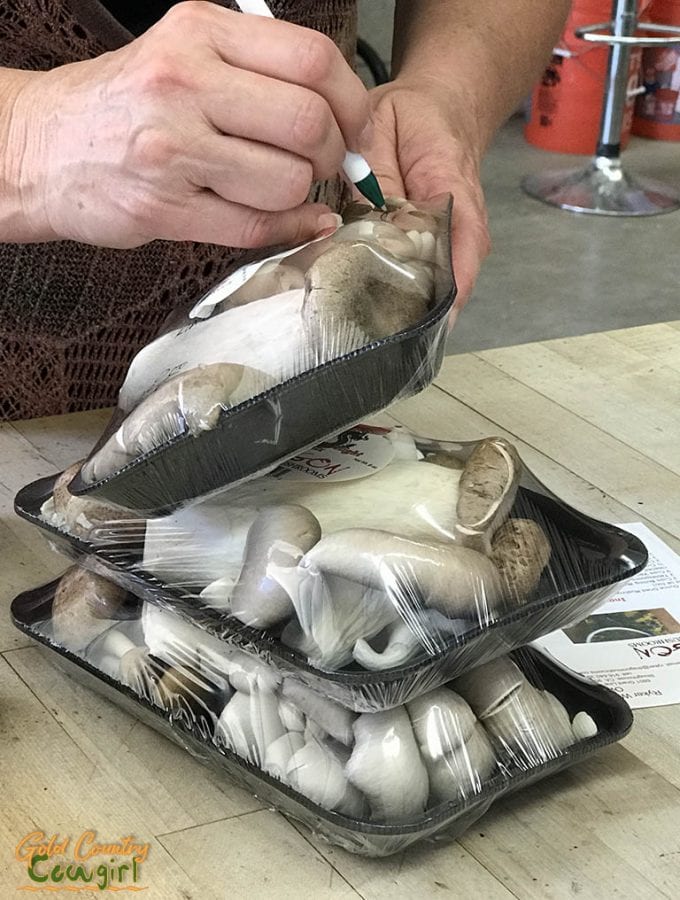 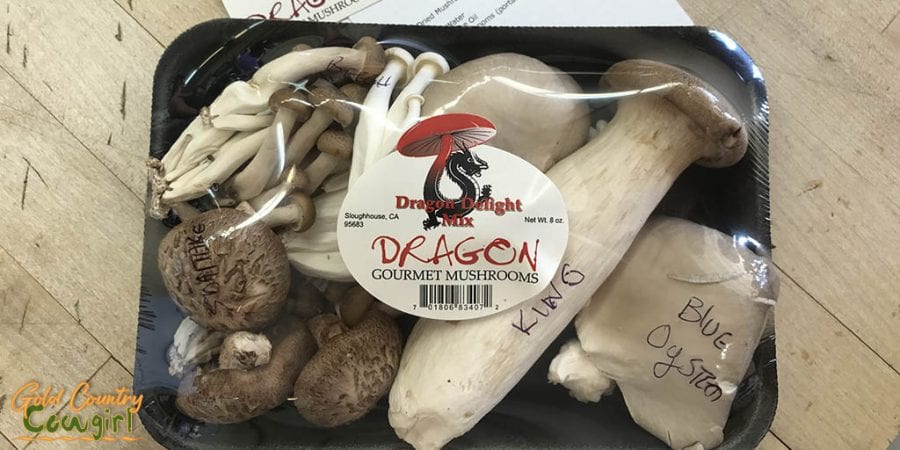 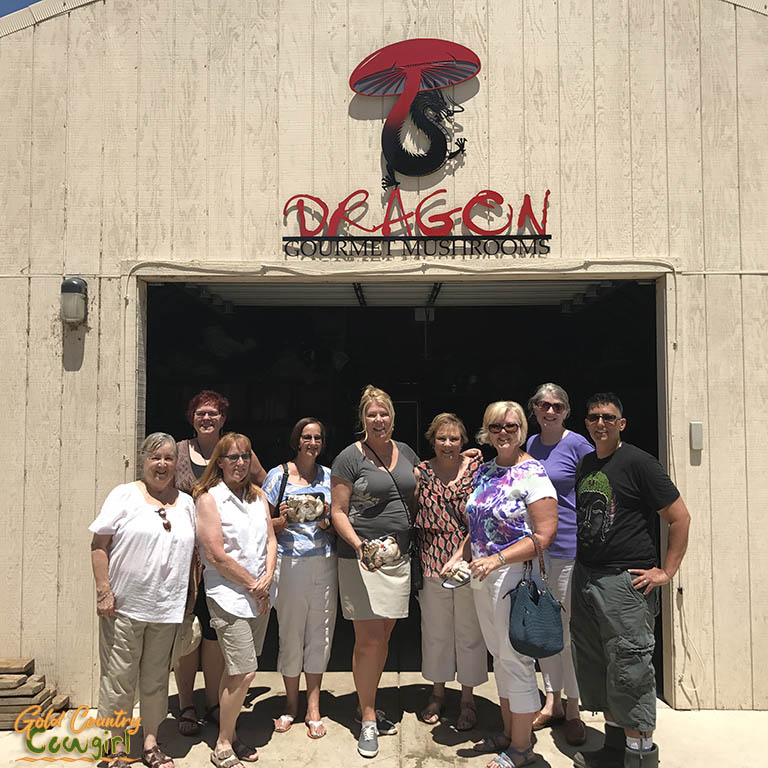 When we were leaving, I told Valarie I would be contacting her to get some details for a blog post. She said, “Oh, you’re a blogger. I love to write!” I asked her if she would like to write something for the post and she quickly agreed. Here is her account of how she became a mushroom farmer.

My journey as a mushroom farmer began at the turn of the millennium, when I was around 12 years old. My favorite uncle gave my cousin and me $20 to bag hot pasteurized rice straw to be hung in his small backyard grow houses.

Uncle Ryker worked as a chemist in a windowless lab for the State of California, but found his passion in an herbalism course. He decided to do some experimenting with oyster mushrooms in the suburbs of Natomas. It was a tremendous success so he set up a small stand at the downtown Farmers Market, early on Sunday mornings. I also helped sell at the farmer’s market. I was an enthusiastic preteen feeling pretty cool because I had a job and I was allowed to drive my uncle’s truck to the market long before any of my friends were driving.

After realizing that this passion could become something bigger, my uncle moved the whole operation to downtown Sacramento near 16th and North B Street. An old warehouse was completely renovated into an Urban Mushroom Farm. With the new warehouse came better equipment, and Ryker was able to hire a few more employees. The new machinery didn’t burn the tender hands of my cousin and me, and increased production immensely. We embarked upon expanding the varieties of mushrooms. Our first bloom of Shiitake mushrooms was a huge success and converting space for King Oyster and Beech mushrooms proved to be fruitful as well. 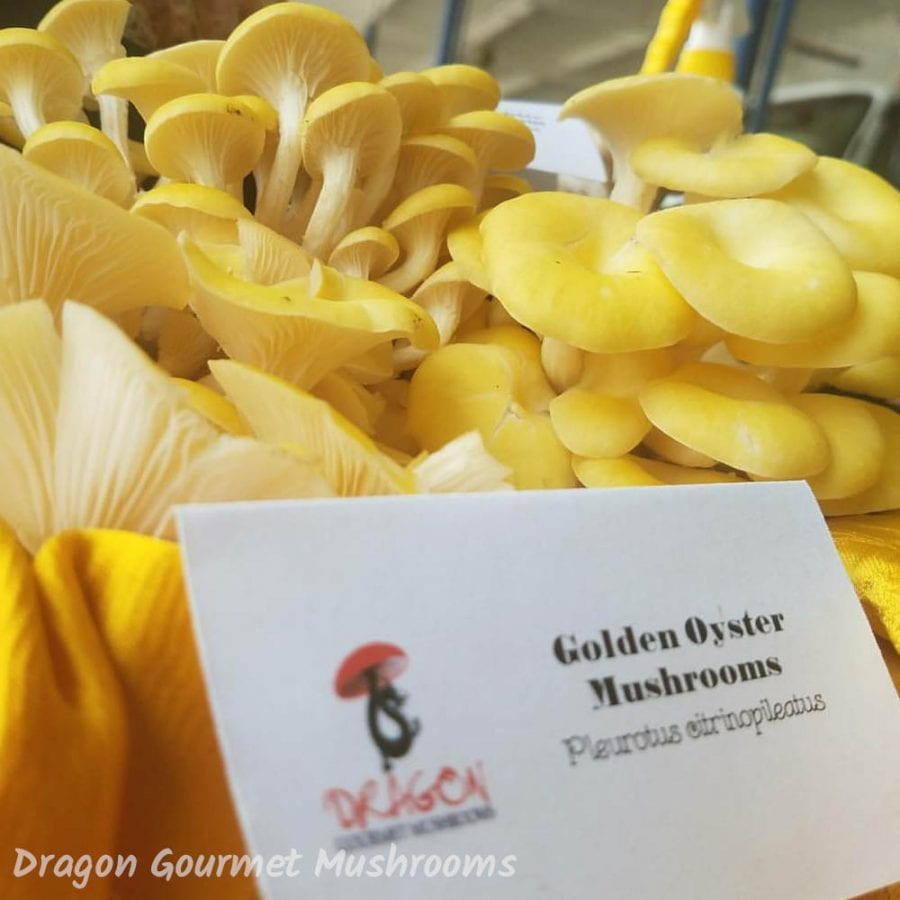 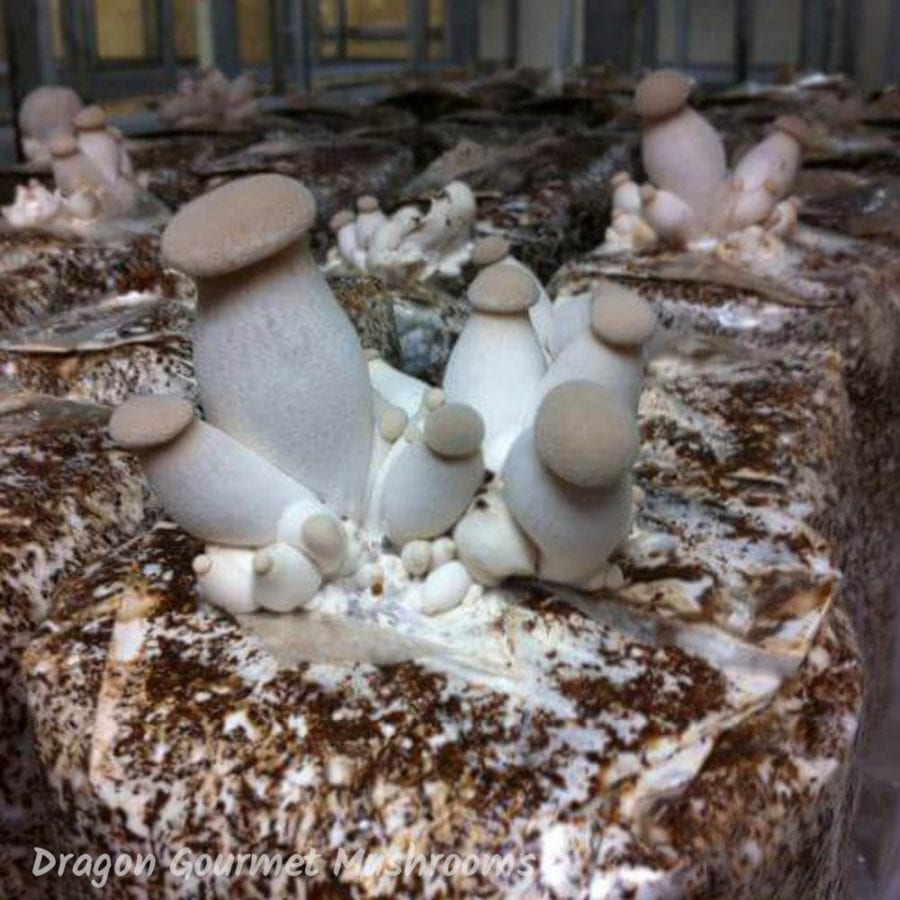 The last leg of our journey led us to Sloughhouse, down the Jackson Highway. In 2014, Uncle Ryker was looking for the perfect property to build his farm, and luckily the first property he looked at was ideal. The 2.5 acre plot of land came with a beautiful home and a large garage. A steel building was erected, and four mushroom hoop houses and a large incubation room were built, using drill guns, an augar, and 3 layers for the wrapping. Gradually, a 5th house was instated, expanding our production. It was a lot of hard work for the crew, and luckily I got pregnant and was resigned to mushroom quality control. 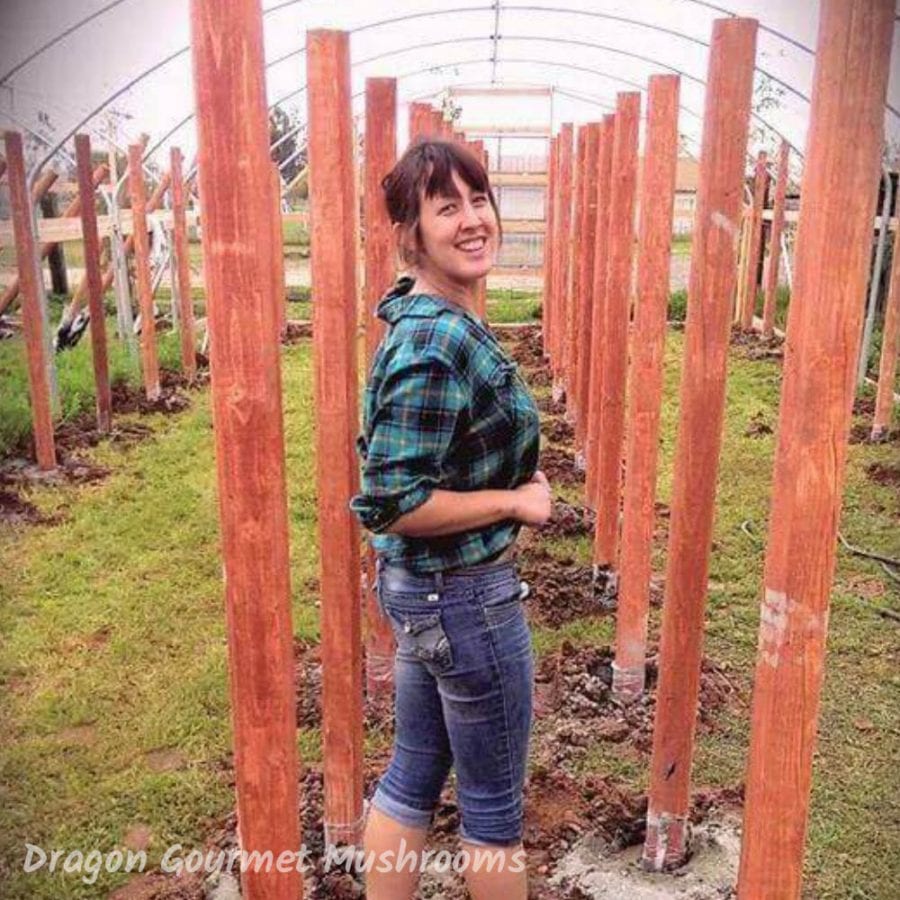 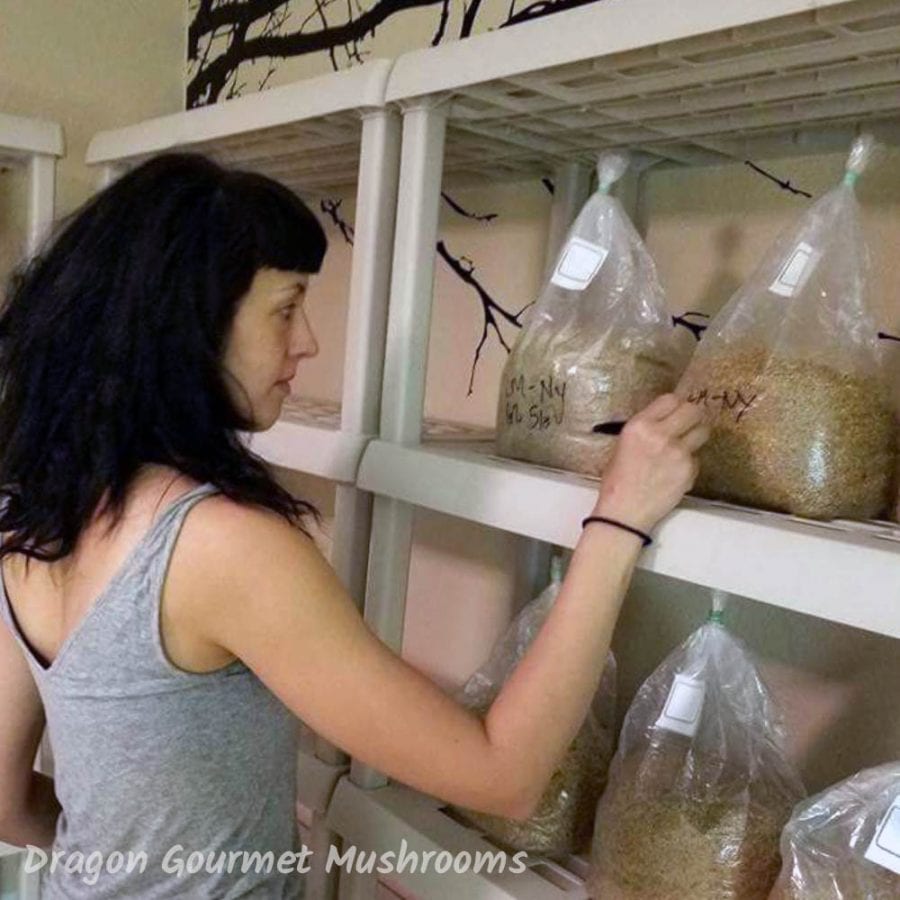 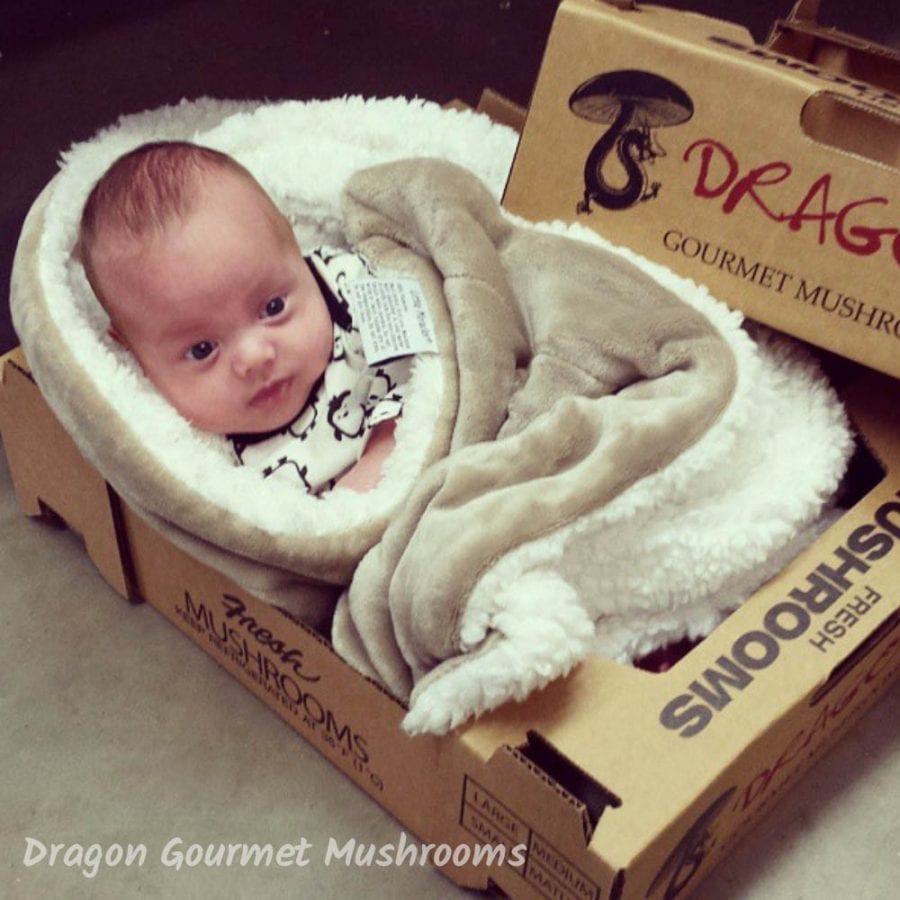 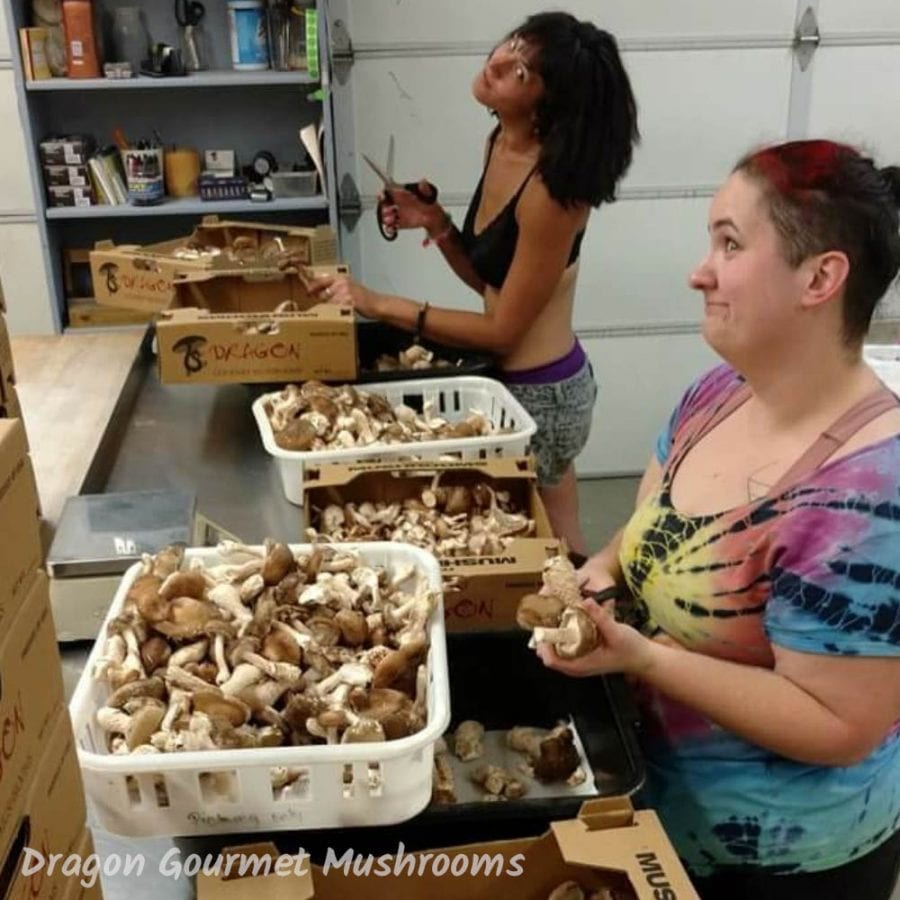 Building on the farm has settled down and has moved on to maintenance and mushroom production. We now have a sterile laboratory in which we can clone our own mushroom spawn. We have wonderful partnerships with our wholesalers, as well as relationships with the chefs in the Midtown area and are expanding our search for more Farm-to-Fork marketing in other areas around our farm. Facilitating farm tours has been fulfilling for us as well, because we believe sustainable farming is something the world should strive to achieve. 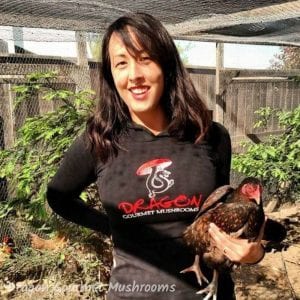 My name is Valarie. My official job title on the farm is Mushroom Ninja Goddess, because supervisor just sounds boring to me. Although I’ve done other jobs throughout my years, I finally realized that my passion was to follow in my Uncle Ryker’s footsteps. Everything I’ve learned from him regarding mycology, mechanics and how to be a leader, I’ve learned on the job. My favorite thing about working on my family farm is that I can bring my sassy two year old on the quieter work days. He is a an excellent coworker. He clocks on and knows our regular routine and follows me around, eager to learn the ways of a Mushroom Ninja.

In September, I’ll be attending the International Food Bloggers Conference in Sacramento, America’s Farm-to-Fork Capital. I am very lucky that this conference is being held so close to where I live. I’m even more lucky to live in the heart of the Farm-to-Fork region. I have access to fresh, organic fruits and vegetables; grass-fed, pasture-raised beef and pork; locally sourced seafood, honey, olive oil, mushrooms and so much more. These items from local farms can be purchased at farmers markets or co-ops and some even at my local grocery stores. Restaurants are eager to let you know that the food they serve is locally sourced.

Do you have a similar program in your area? Is locally sourced food important to you? Have you been to a mushroom farm? I’d love to hear from you in the comments. 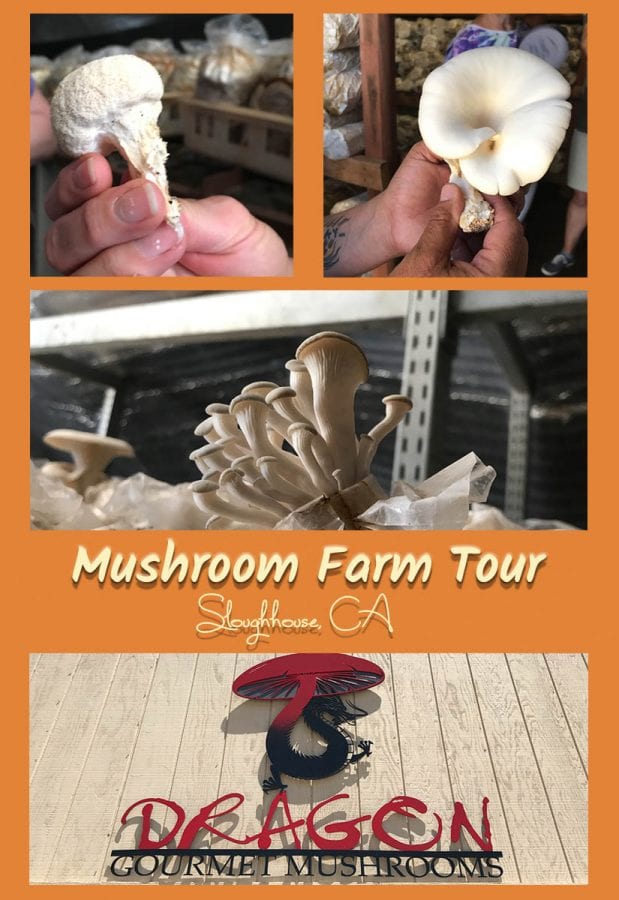 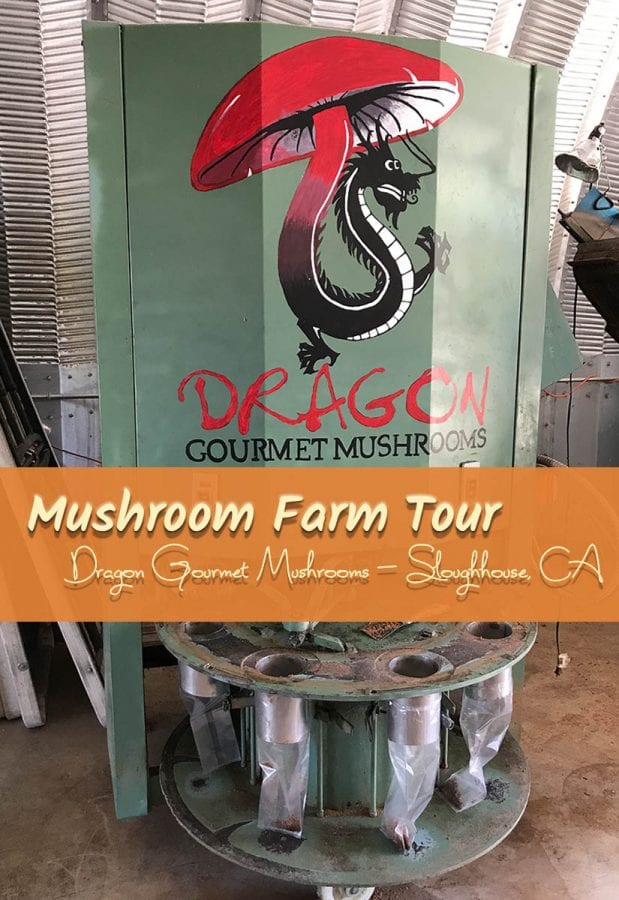