Although I’ve been trying to stay active on social media, I’ve been pretty quiet on the blog lately. Maybe you noticed. I made a life-changing decision a couple of months ago and it has kind of consumed me since.

It all started when my friend, Kelly, who I moved here to Gold Country to be near, told me she and her family were planning to move to Tennessee. I wasn’t invited to join them but I probably would not have chosen to do that even if I had been. 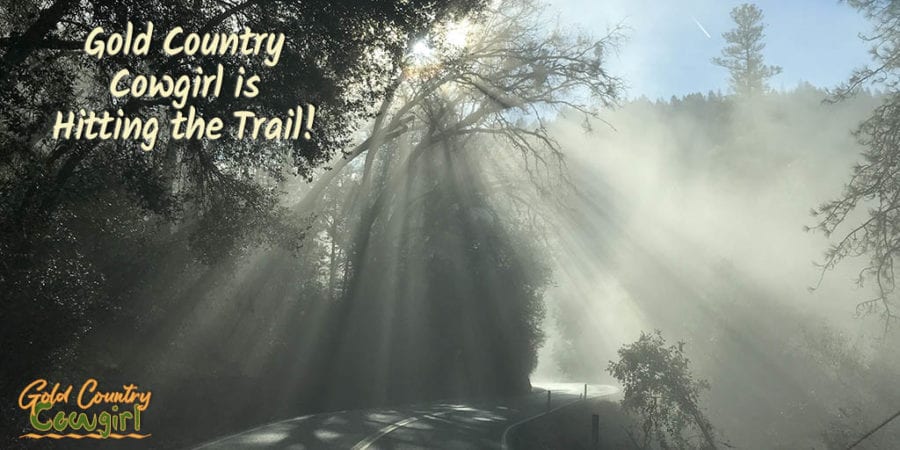 So, it really got me thinking. Would I want to stay here if she moved? I have quite a few friends here, some wonderful pet sitting clients and I have cultivated some great business relationships through the blog. Those things I would truly miss but I haven’t been that happy living here for a while. Some reasons are personal and some are political.

On the personal side, it is not that easy for a single woman to live here. It is not quite as hard as living in a ghost town in Gold Point but it has its challenges. Having expectations is a sure-fire way to be disappointed, which is what happened over time here. I’ll just leave it at that. And, as beautiful as it is here, it is not my ideal terrain. 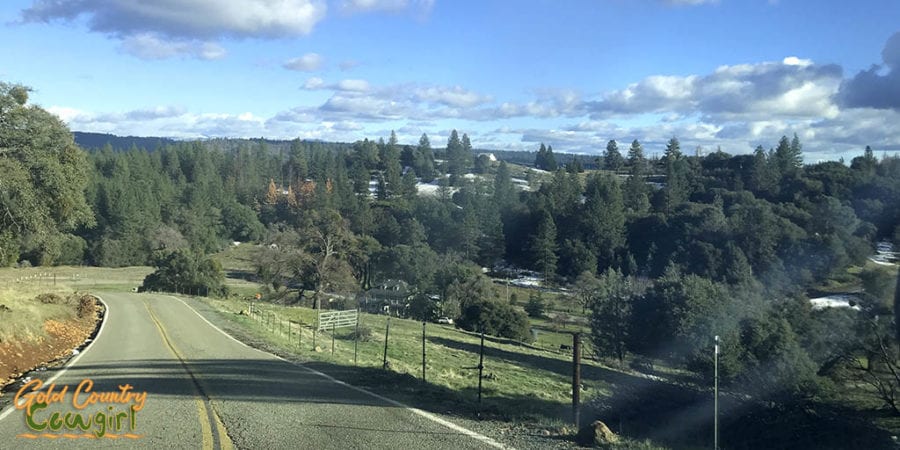 Politically, it is getting really hard to love living in California. I grew up here and was always so proud to say I am from California. No more! I’m almost embarrassed to say it now.

To Move or Not to Move

I made a list of the pros and cons of staying here and the cons definitely outweighed the pros. So, now the question was, where would I go? Although my dad is still very healthy and gets around on his own quite well, he is 96 years old! I decided that it only made sense to move to Texas now, where I would probably end up eventually anyway, and spend time with him. He was pretty excited by the idea.

I started planning the details of the trip. It is about 2100 miles to southern Texas where my dad lives. I don’t like to drive more than about 7 hours a day at the most so I figured I would take about five days to drive there. When I started thinking about the problem of finding four or five hotels/motels that would take my three cats, I wondered if it would make sense to buy a used travel trailer. If I did, I could take more time and not push it so much. I wouldn’t have to worry about where we would stay and I’d have the travel trailer to vacation in later. When I talked to my dad about it, he said go for it – take as long as I wanted to get there!

And then it happened. Slowly at first, but the idea of living a full time RV life gained momentum as various friends gave their input. Have you ever had a dream that you thought was just so out there that it would never happen? All my life I’ve had this dream of traveling around the country in an RV, living the full time RV life, moving when I wanted, working odd jobs if I needed to.

The dream was much stronger in my 20s and 30s when I fantasized about it often. It got buried by life events as I got older. I had given up on the idea of it ever happening, thinking I had missed the opportunity, but I’m at a point in my life now where I might actually be able to pull it off!

I started looking for a used travel trailer a couple of months ago. Even though I didn’t have all the money I needed yet, I wanted to see what was out there. I found several that met my criteria for a price I could afford once I had my funds together (I had to sell some things). Of course, once I had my funds, these trailers had all sold. I continued to look but summer vacation is in full swing and the number of travel trailers available became fewer and fewer.

While I was looking and waiting, I started following several YouTubers who are living the full time RV life. I binge watched everything I could about full-time life on the road to see what it might really be like – to see if it looked like something I could really do. It was amazing to see how many single women are out there doing it – even women my age! I have especially enjoyed Carolyn’s RV Life, Creativity RV and Frugal RV Girl. I also enjoy videos from a couple whose channel is We’re the Russos.

Then It Got REAL!

On Saturday, things became a lot more real. I found a trailer! It had just come on the market and I jumped on it. It sounded great and the photos looked good. I was hoping it would be “the one” as I drove the hour and a half to Modesto to look at it. It met all of my basic criteria. If it was in as good a shape and as clean as the owner said, well, I would have a big decision to make.

The trailer was awesome. Even though it is 14 years old, it is extremely clean and the interior looks practically new. We did a thorough walk through and everything, at least everything major, worked perfectly. I knew it would serve me well if I actually was able to live the full time RV life. 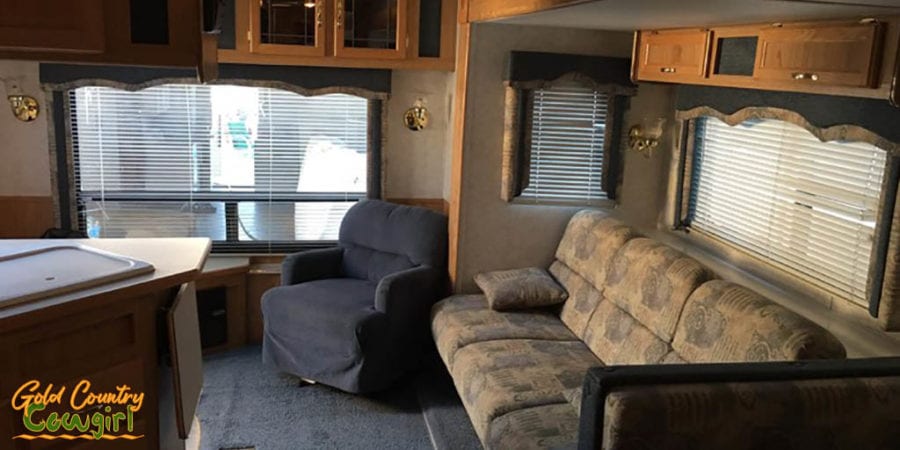 The problem? In my excitement to find it, I didn’t even think about the length until I was researching it online. I wanted to stay around 25’ and this one is 28’. That may not sound like a lot of difference but in my mind, it was huge. Even though I discovered this before I went to see it, I decided to go anyway. It was the layout I wanted, potentially in great shape and an amazing price.

What Was Holding Me Back?

I loved the trailer. The only thing holding me back from making a decision was my fear of towing it! I’ve never towed a large travel trailer. I had a three-horse horse trailer and towed that quite a bit as well as other small trailers but never an RV. I had to make a decision. The owner had two other people coming to look at it that day and I knew it would be gone.

I decided to bite the bullet! I was going to have to tow something eventually so it might as well be now with this trailer that I liked so much. We went to the bank for a cashiers’ check and the trailer was mine!

Ron and Juanita, the owners, and their neighbor, Jason, were awesome. There were a couple of issues getting it hooked up but together they got it done. 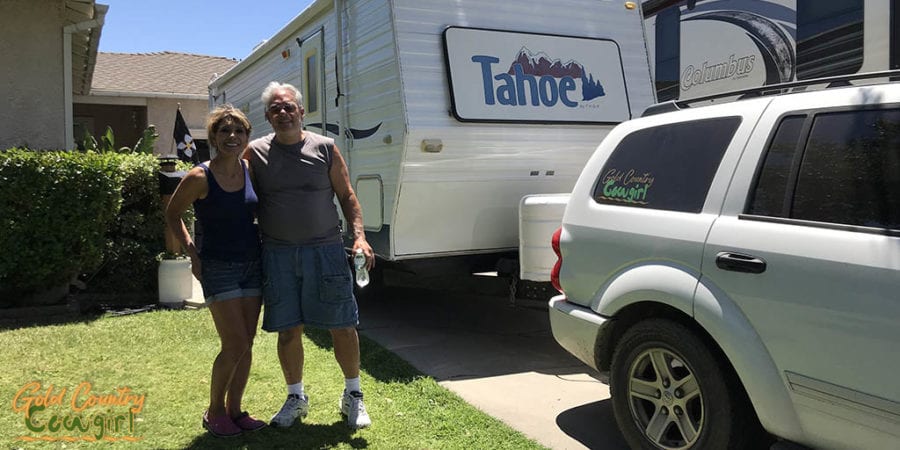 The time had come. I had to get in the driver’s seat and head home. Talk about white knuckles. I had to remind myself to breath a couple of times. I felt every single movement, especially on the freeway with semi-trucks passing by. When I was finally off the freeway and driving the rural highways, I started to relax a little. By the time I got home, I was feeling much more confident.

The next challenge was parking it in my driveway. I chickened out and asked my neighbor, Larry, to do it. He made it look so easy! 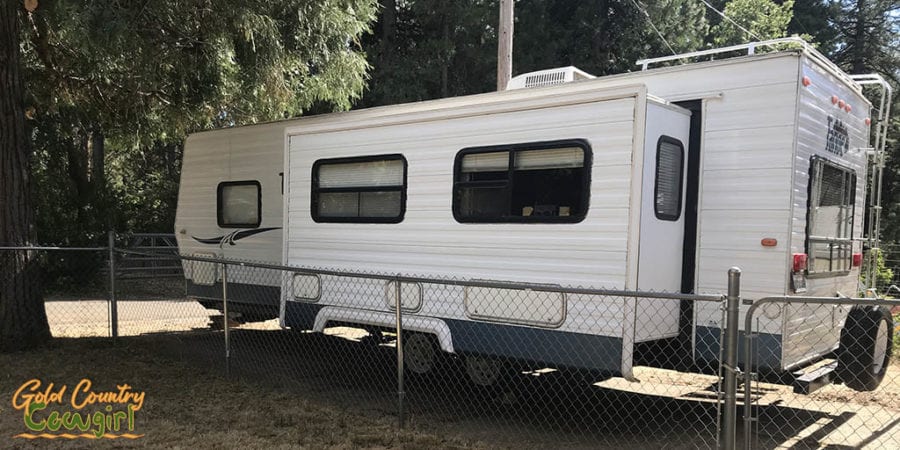 Will I Start Living the Full Time RV Life in My Travel Trailer?

Plans for when I’m leaving and where I’m going have changed multiple times, but now that I actually have a trailer, I can start thinking more seriously about what I want to do. The main thing that will determine when I head out is how quickly I can get everything else in order. I plan to sell pretty much everything I own and that will take some time.

I also need to make arrangements to get my horse, Dancer, to Southern California. My friend, Nancy, has offered to come get her to take her to another friend who will keep her for me indefinitely. He took my other three horses when I moved from Southern California. My dad and his friend have been looking for a place for her in Texas but haven’t found anything. There are no stables where he lives and they haven’t found a private place to board.

What to do about Dancer is something I will have to think more about when I know what I am doing long-term. I still don’t know for sure what that will look like. I may just take several weeks to get to Texas, get settled there and spend time with my dad, then do more traveling from there in the spring rather than going full time right now. So many things to consider and decisions to make! 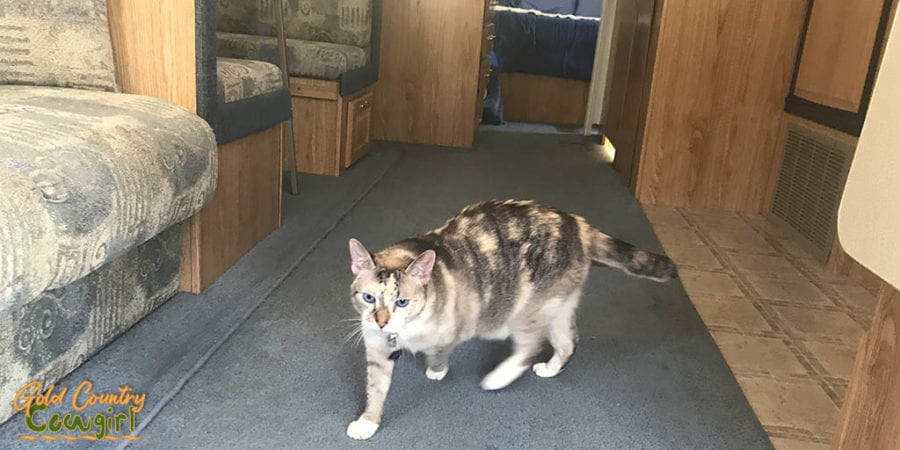 One of my three cats, Christy Paws, checking out the new digs.

So, friends, as much as I have enjoyed learning the ropes of living and loving life in Northern California’s Gold Country, this Gold Country Cowgirl will be hitting the trail. I have a few more stories to write about Gold Country before I leave, but I hope you will continue to follow me on my new journey of discovery as I travel this beautiful country writing about wine, food, travel and lifestyle wherever I roam.

What life-changing decisions have you made? I’d love to hear about them in the comments. 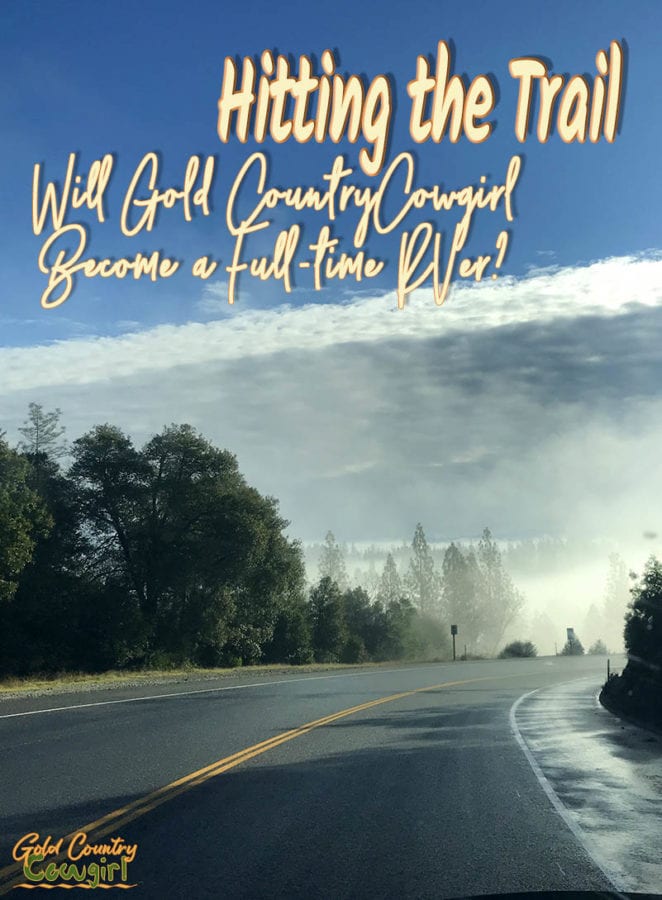 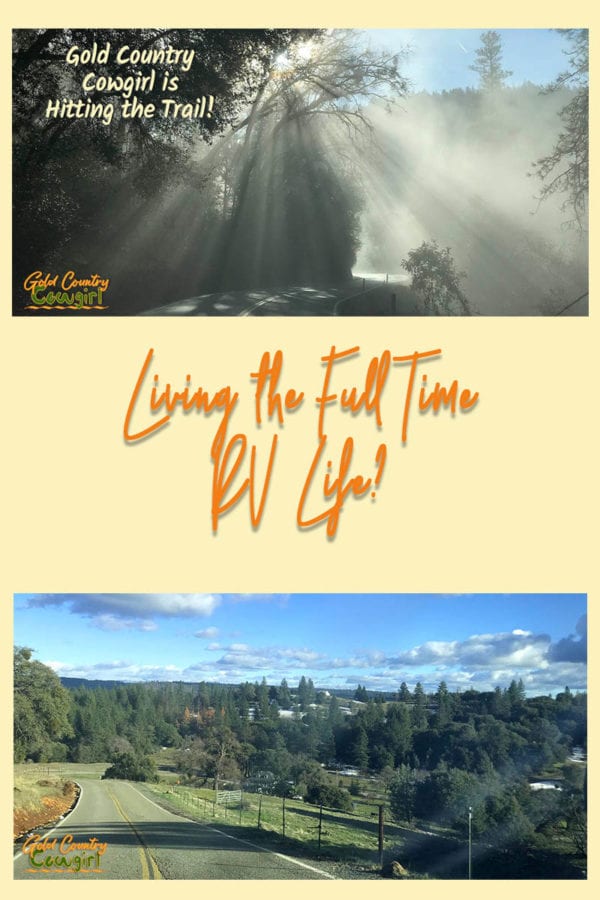