UPDATE: The bloodless bullfights have not resumed since the beginning of the pandemic and I have been unable to verify if they will start up again in the future.

Bullfighting is one of the best-known, and also most controversial, traditions of the Spanish culture. Supporters claim the bulls live a better, longer life than other cattle. They see it as art, much like ballet. As bullfighting aficionado Ernest Hemingway famously said in Death in the Afternoon (1932), “Bullfighting is the only art in which the artist is in danger of death.” Critics claim it is nothing more than torture. I have to admit, I attended a bullfight in Mazatlan in the 70s and would never go again. From the stands, it didn’t seem as “real” as I now know it is. When I learned about the bloodless bullfights in La Gloria, Texas, I was curious to see how they are different. 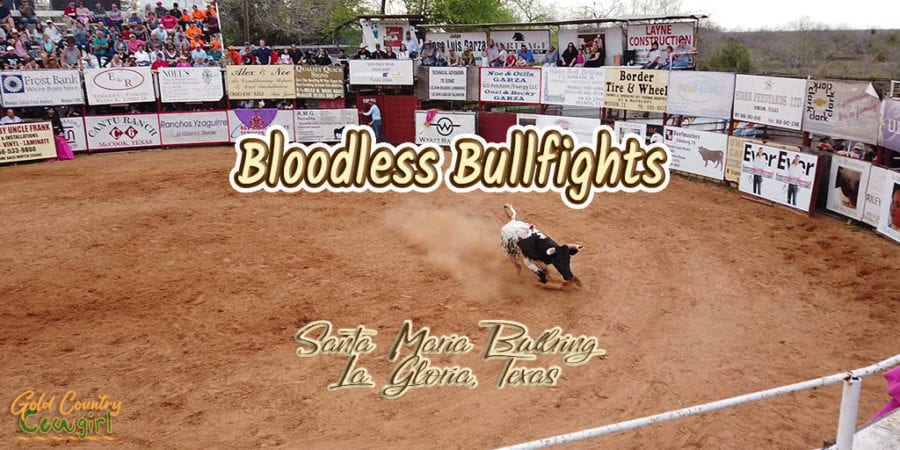 A Very Brief History of Bullfighting

Love it or hate it, bullfighting has played an integral role in Spanish culture for thousands of years. The exact history of bullfighting is hard to trace but it may have its roots in Roman gladiator games or even further back in history to bull worship and sacrifice by the Celtic-Iberians.

The first known Spanish bullfight dates back to 1133 AD in honor of the coronation of King Alfonso VIII. Originally, the bulls were fought from the backs of highly trained horses. Eventually, by the 18th century, fighting from horseback gave way to fighting the bull on foot.

Bullfighting today is pretty much the way it has been since 1726 when Francisco Romero of Ronda, Spain, introduced the sword and smaller cape that is used at the end of the fight. (There are other styles of bullfighting, particularly in Portugal.)

Although it is becoming less popular and restrictions are increasing, bullfighting is still legal in Spain, France, Portugal, Colombia, Venezuela, Peru, Ecuador and Mexico. The largest bullfighting ring in the world, seating approximately 55,000 spectators, is Plaza México in Mexico City.

Bullfighting in the United States

Freestyle bullfighting was developed by the rodeo clowns who protect bull riders from getting stomped or gored by a bull. Competitions are staged by two different organizations. The competitors have a very short amount of time (60-90 seconds) to pull off tricks while maneuvering around and jumping over the bull. The more dangerous the stunts and meaner the bull, the more points awarded.

Spanish-style bullfighting was never a part of mainstream US culture so it has never been banned per se. However, California’s central valley had a large Portuguese population that held bullfighting events. Bullfights were outlawed in California in 1957 but due to a strong lobby effort, the Portuguese community was allowed an exception to hold bloodless bullfights around Portuguese religious holidays. It is cruelty laws that prevent Spanish-style bullfights to take place in the US as it is unlawful to kill an animal in a competition or a festivity.

Their are several styles of nonlethal or bloodless bullfighting around the world. In the Portuguese bloodless bullfights in California, the matadors use mock lances that stick to Velcro patches. In La Gloria, the bull has a flower attached to its back by Velcro. The bullfighter must reach over the horns and grab the flower to simulate a clean kill. This is actually more dangerous than a traditional bullfight. In a for-kill bullfight, lances and barbed sticks weaken the bull’s neck muscles causing it to lower its head. This makes it easier for the bullfighter to get over the horns with his sword.

“In Mexico, and the other 13 countries where they kill the bull, they call it the ballet of death. Here, it is the ballet of life,” says Fred Renk, owner of the Santa Maria Bullring in La Gloria. 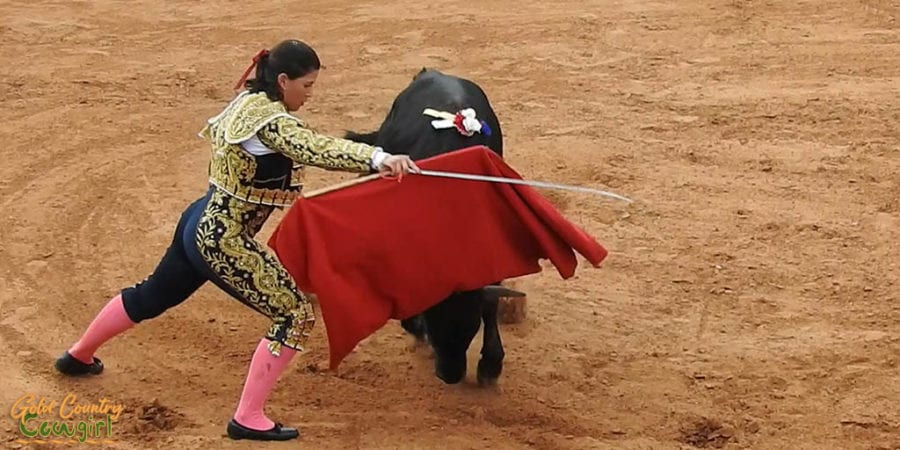 The flower attached with Velcro is clearly visible on this bull

The bullfights are bloodless for the bulls but may not be for the matadors! In fact, on the day I attended, both matadors were struck by bulls and took quite a jolt. Fortunately they weren’t seriously hurt but that is always a possibility when you are dealing with a 1,000 pound animal. 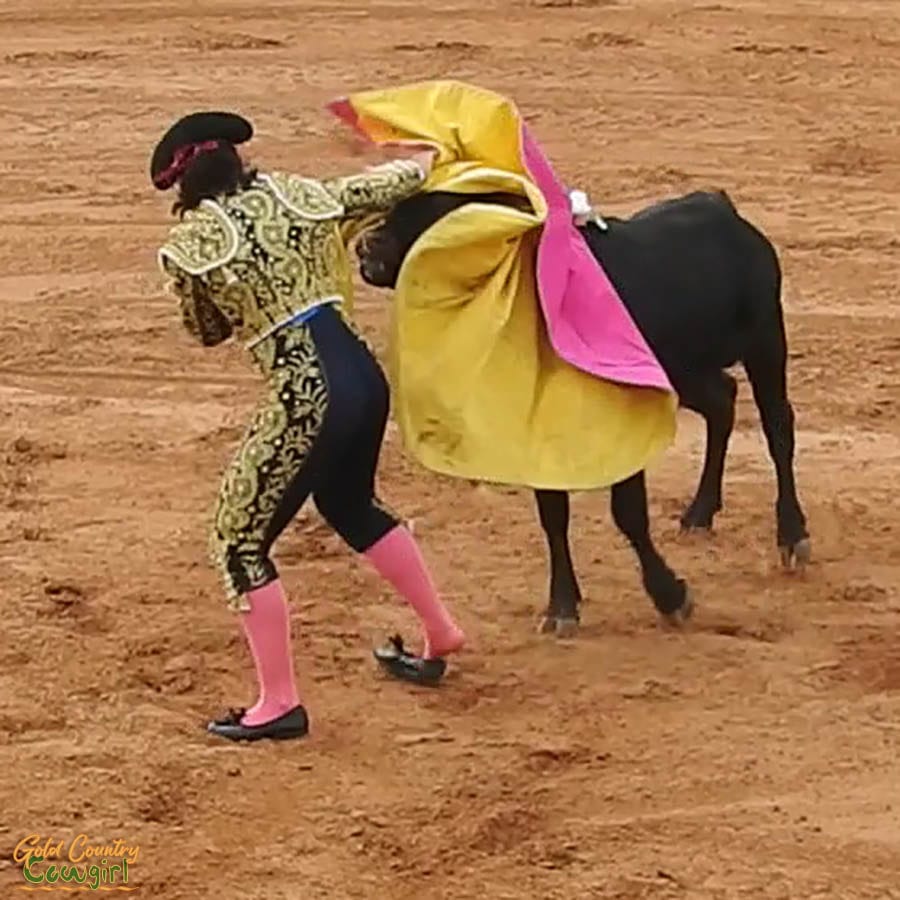 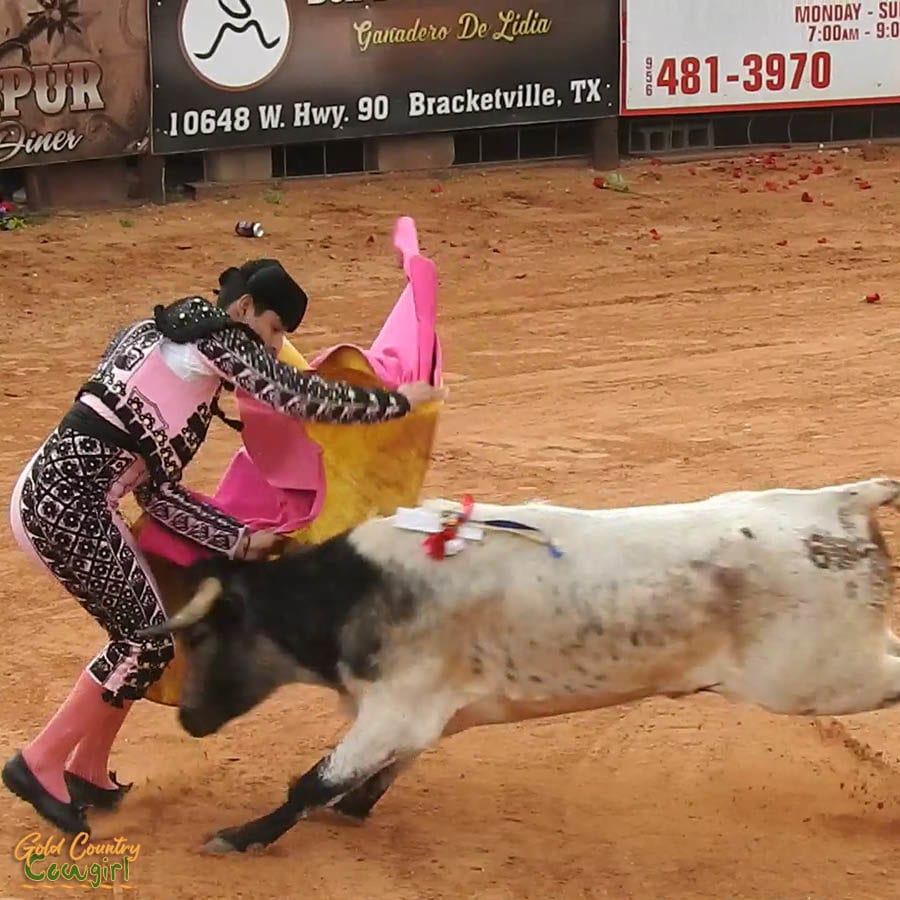 La Gloria is a tiny speck of a town in the middle of nowhere. The area is mostly ranches that were given as Spanish and Mexican land grants in the 1700s and 1800s. Some of the 100 or so residents are decedents of those original land grant families.

There are lots of interesting articles online about owner Fred Renk and how the Santa Maria Bullring came to be. I’ve listed a few under resources so if you have a desire for more details about the history, check them out. 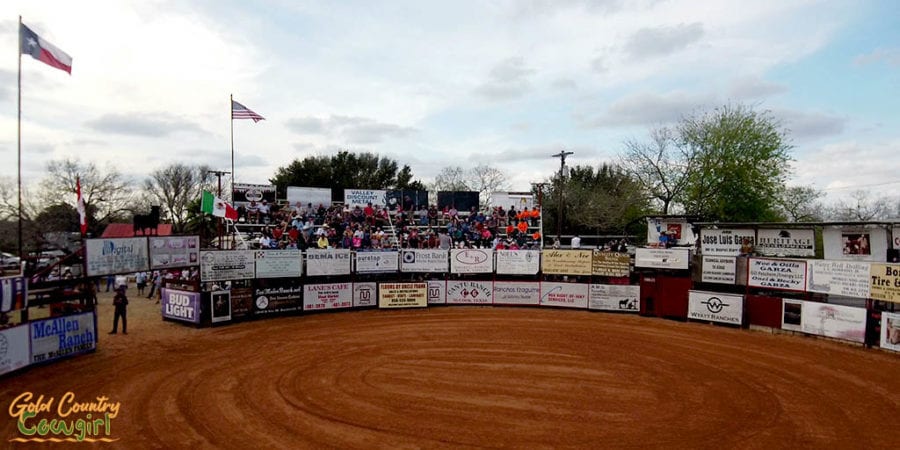 A look across the arena at the shady side

I was a little disappointed when I learned at the beginning of my tour that the show I would be attending was the last. After 20 years of hosting bloodless bullfights in Texas, Fred Renk had decided to retire. With no one to take over for him, the bullring was for sale and its future uncertain. He hoped someone would purchase it and continue with his tradition of bloodless bullfights in Texas.

The event I attended on February 16, 2020, was well attended by both locals and winter Texans. This may have been Fred Renk’s last Olé but it is not the end of the Santa Maria Bullring. During the event, Fred’s grandson, David, made an announcement. He and some of the bullfighters had gotten together and decided to continue putting on the fights. The next event will be on March 8th. When David finished speaking, Fred declared, “The bullring is no longer for sale!” 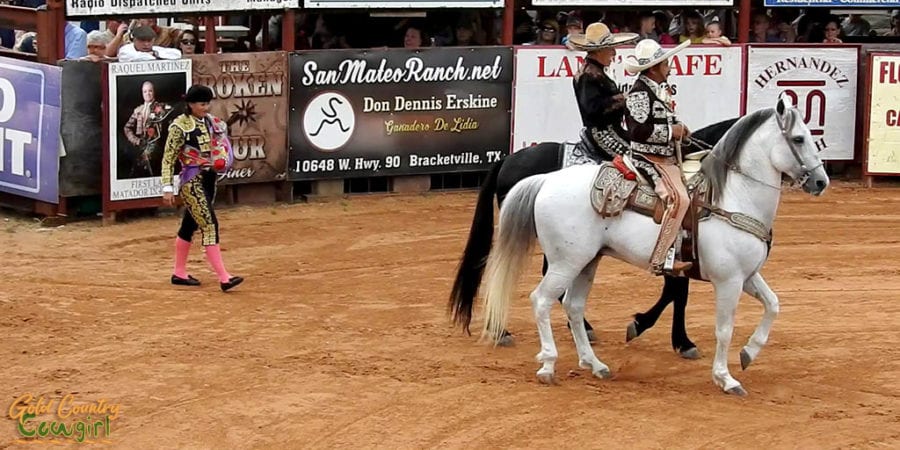 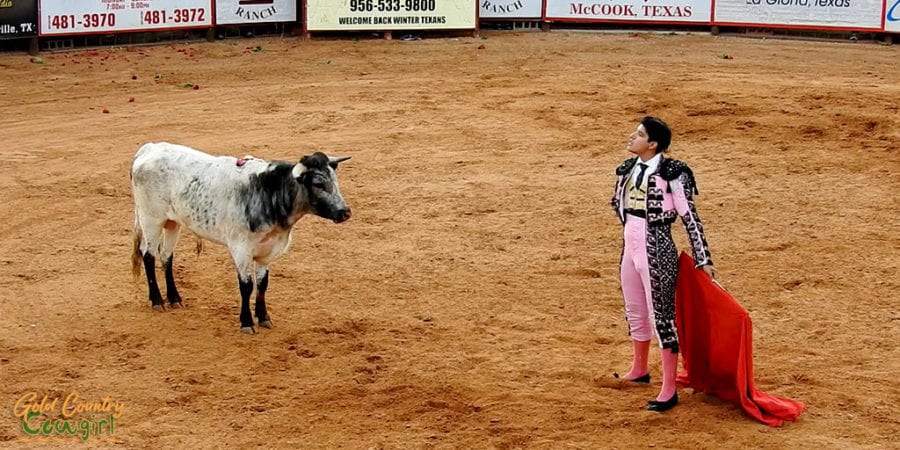 Cayetano Delgado facing down the bull

Karla Santoyo, from Aguascalientes, Mexico, is one of only seven active female bullfighters. She began her career as a novillero at age 19, following in her father’s footsteps. Her father, Paco Santoyo, is a world ranked bullfighter in Mexico. By age 24, Karla was a veterinarian, treating bulls as well as fighting them. Now, at age 27, she is a headlining matadora. She doesn’t like the female designation and would just prefer to be called a matador.

Some toreros (male bullfighter) and bullfighting aficionados have never accepted female bullfighters. They are often thought of as “mere novelties at best or as trespassers on a sacred male domain at worst.” Karla says her vocation is “a little bit complicated for a woman because it’s a world of men.” 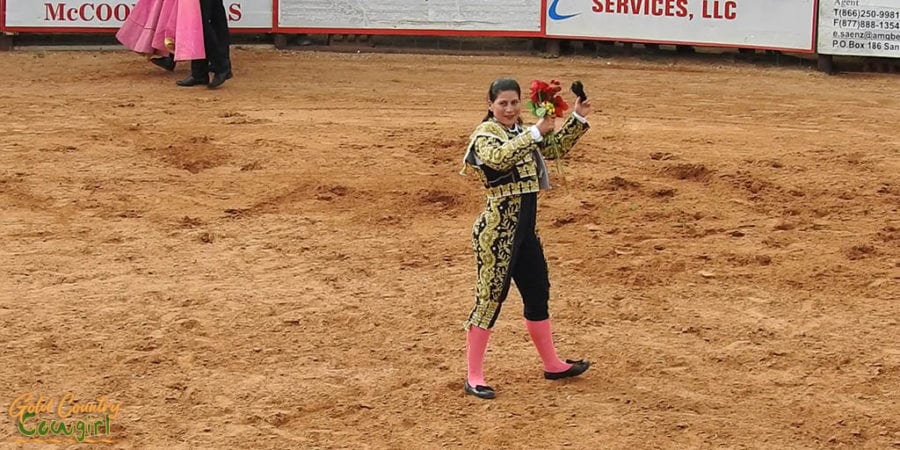 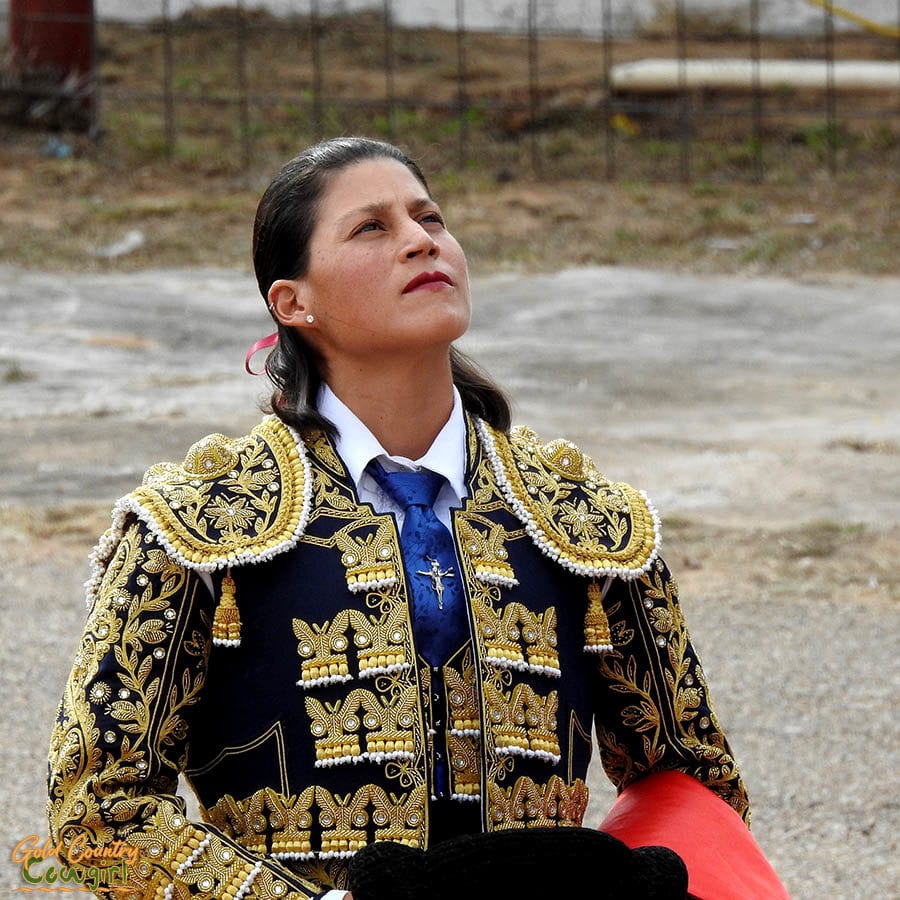 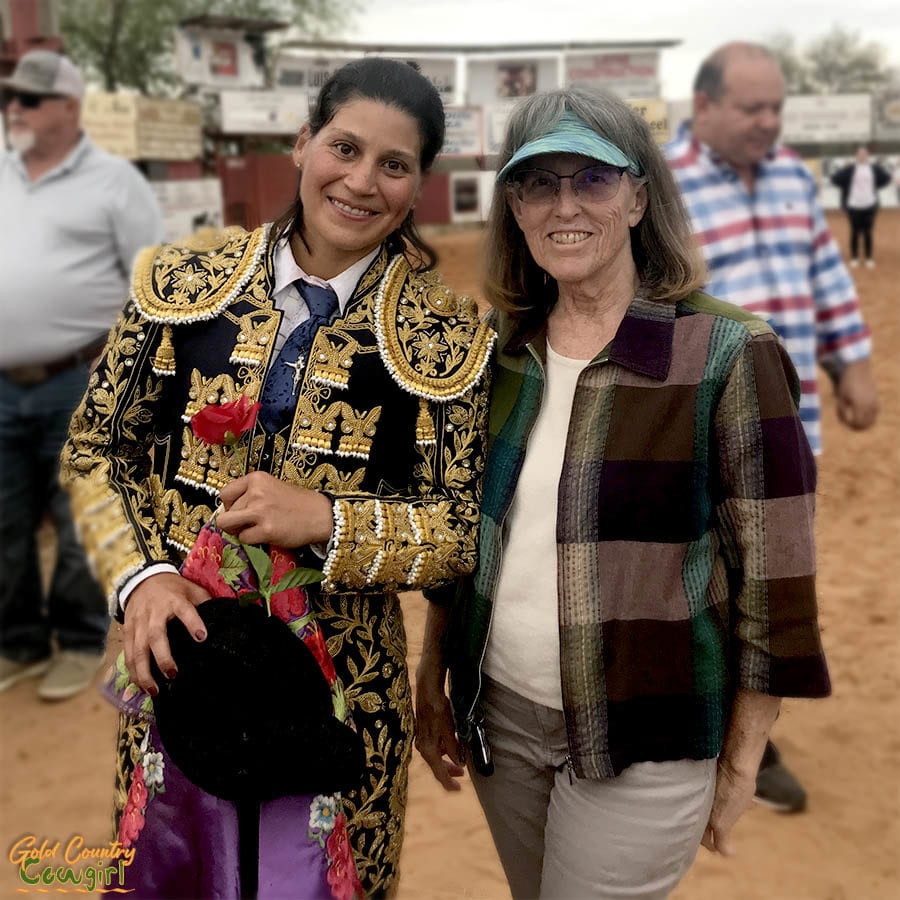 The Nature of Bulls

Are bulls naturally aggressive? The answer is yes and no. All bulls can be aggressive when they are defending their territory. It is a must if they are to dominate and breed. Fighting bulls are selectively bred for their aggressive nature. Bulls are color blind so it is not the color of the cape that they attack. It is the movement. 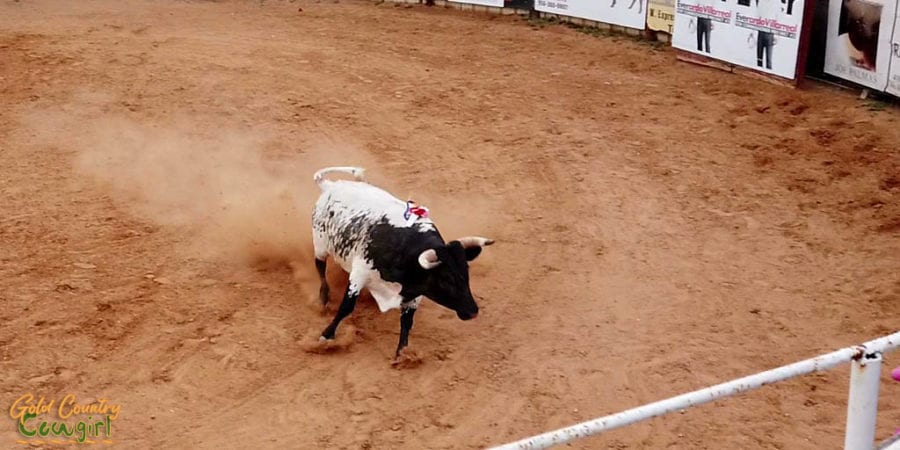 As for how the bulls are treated, a post on their unofficial Facebook page says, “The bulls are never harmed. The organization P.E.T.A. and the S.P.C.A. were given open invitations to visit, and left satisfied with what they saw.”

I chose to join a group tour with Go…with Jo! for this event and I’m glad I did. Jo was our guide for this outing and she was awesome. We learned so much about bullfighting in general (the three acts, different passes, etc.) and the history of Fred Renk and the Santa Maria Bullring. I was much more prepared for the event than if I had just gone on my own. And it is always nice to let someone else do the driving.

Final Thoughts on the Bloodless Bullfights in La Gloria, Texas

This was definitely an interesting and entertaining activity. The energy was high and Fred really got the audience involved shouting “Olé” with each artful pass! I do hope they are able to continue so I can go again next year.

The bloodless bullfights are only held a few times during the winter, usually once a month. The gates open at 1 pm for food, beverages and entertainment. Bullfights start at 4 pm. Call the bullring at 956-481-3300 for the schedule and reservations. You’ll pay when you arrive. Sunny side seats are $30, shady side $35 and box seats are $40.

Lots of interesting reading and perspectives in the following resources. You won’t find any animal rights groups in the list though. I am all for the ethical and humane treatment of animals but, in my experience, they are extremists who do not do unbiased reporting. They use “likely” and “probably” a lot to try to validate their rhetoric. If you are interested in their position, you’ll find plenty of fodder on the net. 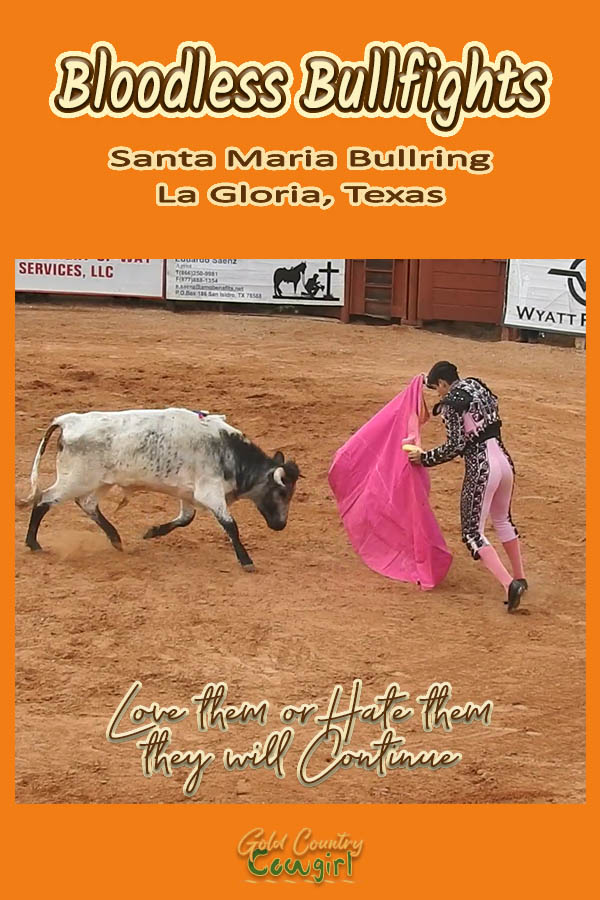 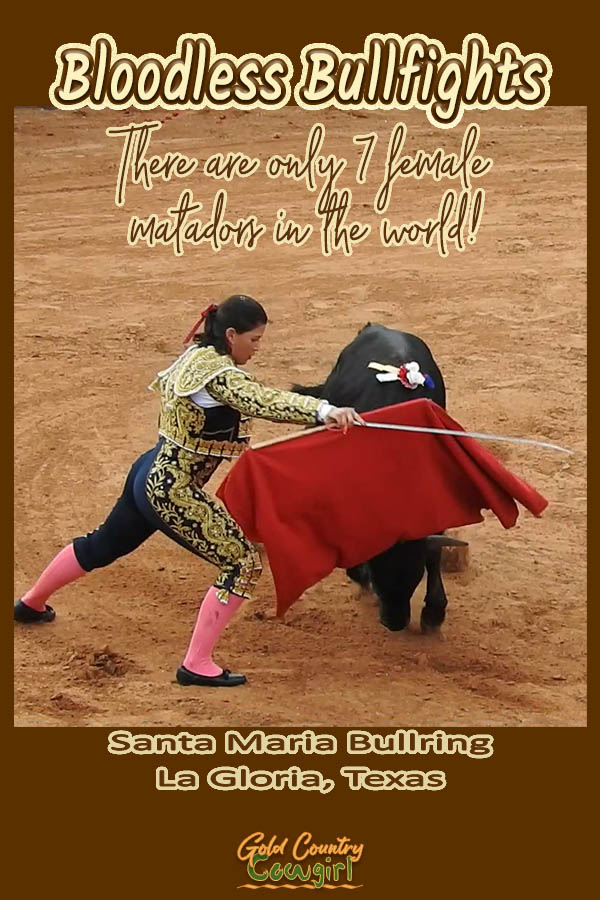 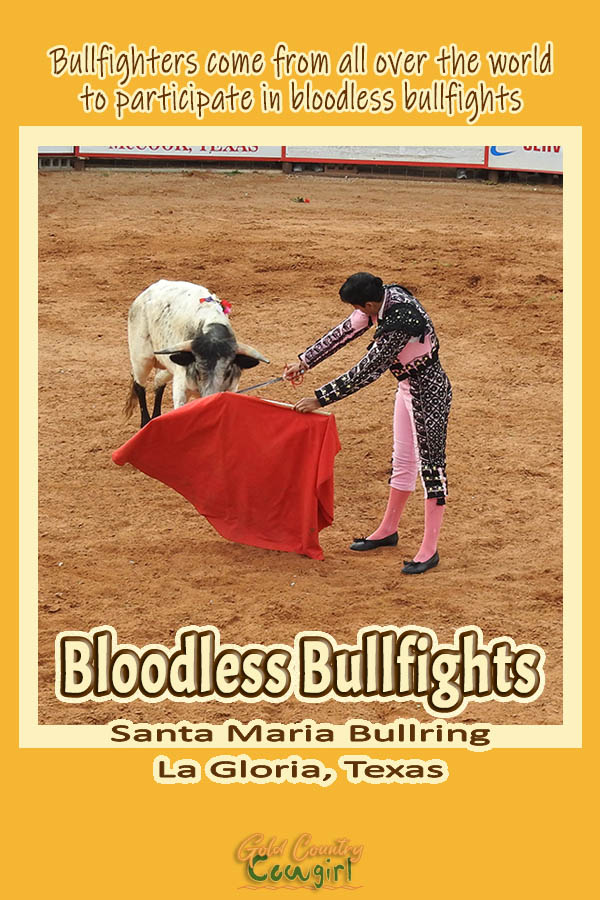