Best Places in Brownwood Texas in One Day

While I was in Abilene, I had a great time visiting with other RVers at the Lolapalooza event. During the week there, I decided to go a slightly different way when I left than I had originally planned. Brownwood, Texas seemed to be a good distance for a stop but I knew nothing about it. I decided to stay at Lake Brownwood State Park which was an awesome choice. I spent a couple of days catching up on writing, including two newsletters and a blog post. After two days of that, I had to get out and visit the best places in Brownwood Texas. 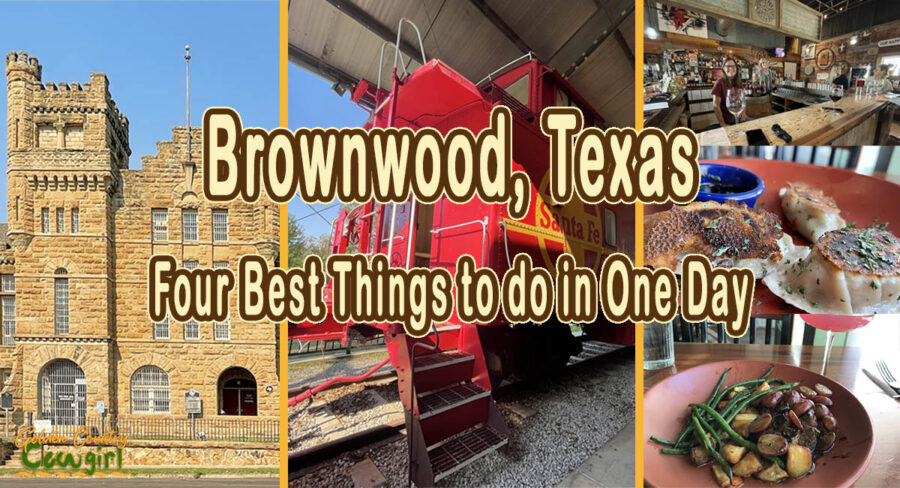 After a fair amount of research, I put together an itinerary for the day (Friday). Be aware that the Brown County Museum is only open Thursday through Saturday. Therefore, those are the days you’d need to plan to visit these Brownwood, Texas places of interest to be able to do all in one day.

The Brown County Museum is definitely one of the best places to visit in Brownwood. Allow a couple of hours to tour the museum and jail. Plan to arrive early as the museum is only open until 2pm on Thursday and Friday.

The museum exhibits showcase 150 years of Brown County history. You’ll be transported from the Comanche and the earliest Texan settlers through the WWII era. In addition to the historical exhibits aimed at adults, there is a cute children’s section and a miniature vintage circus. 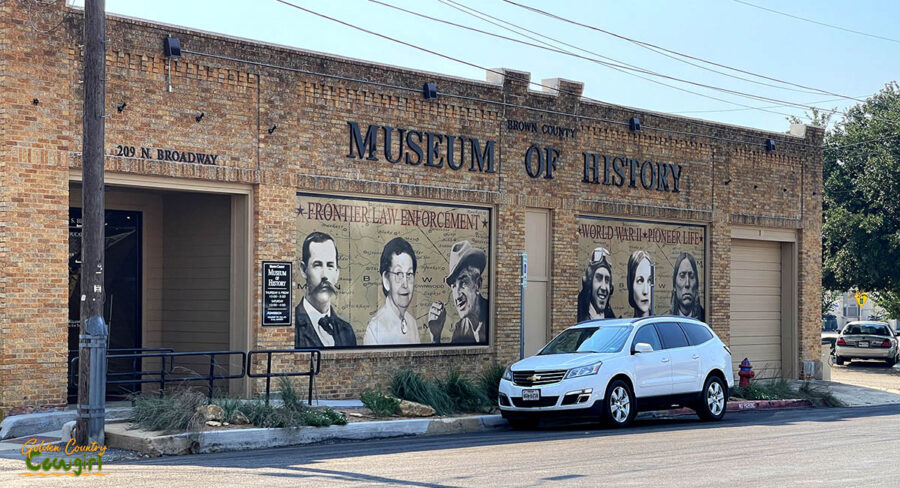 The museum building houses displays depicting Brown County from prehistory to the present. 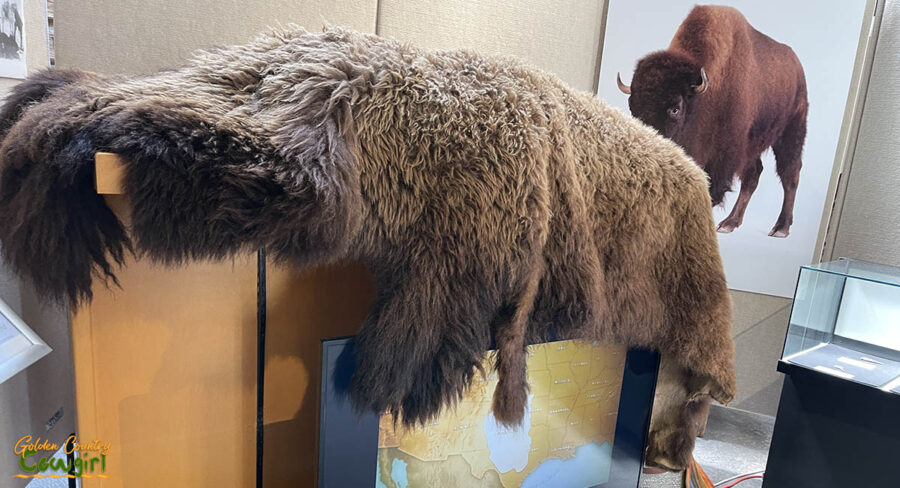 Have you ever felt a buffalo pelt? It was surprisingly soft. 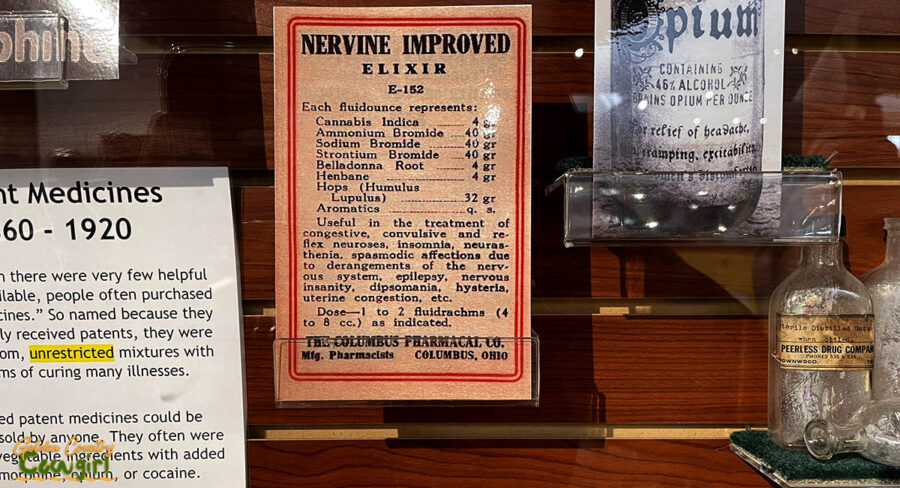 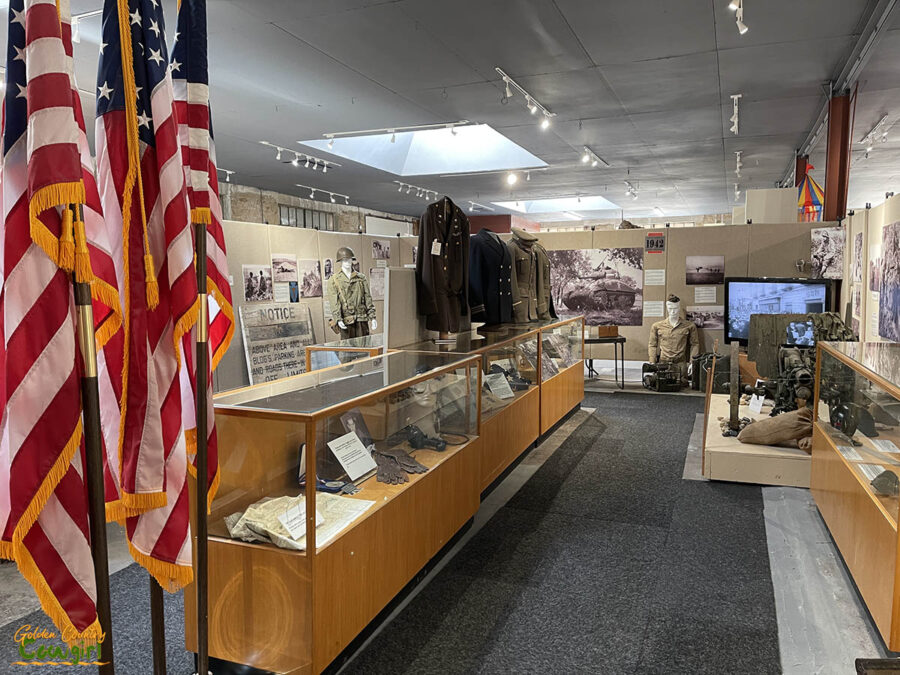 After browsing through the museum, take a guided tour of the Brown County Jail. This enlightening look into the life of both jailers and inmates in the early 1900s was my favorite part.

A tour of the Brown County Jail will give you a glimpse into the lives of both the jailers and inmates in the early 1900s. Click To Tweet

The more I learn about a place, the more fascinating it becomes to me. I want to know even more so I was happy to pick up a couple of brochures with interesting stories and facts about the jail. 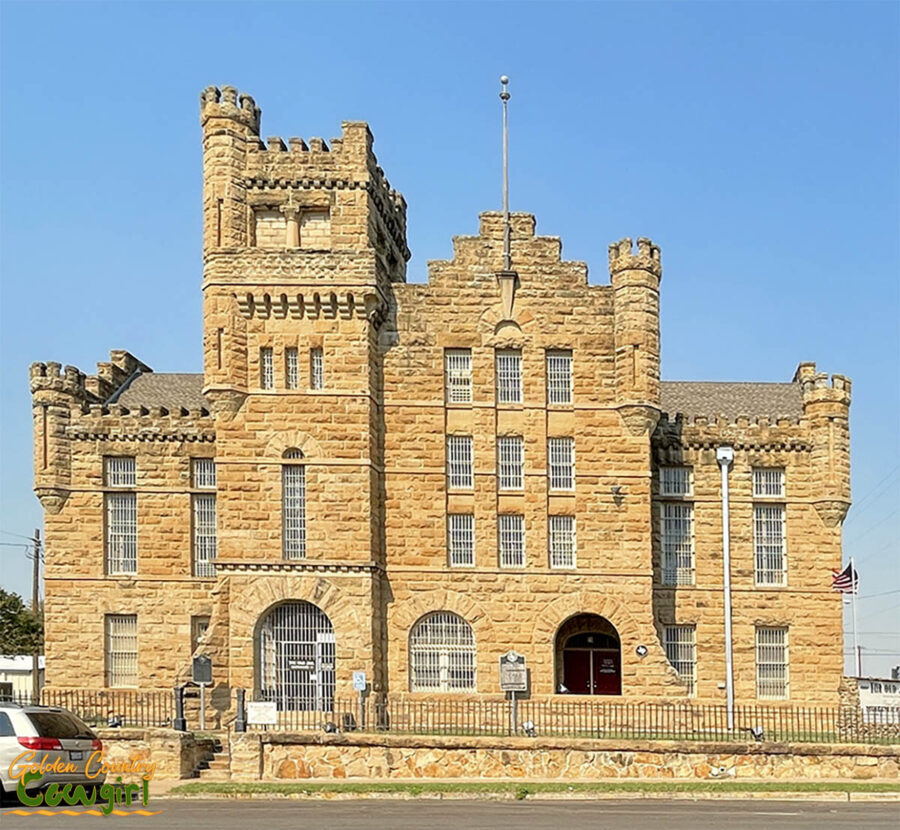 The four-story Brown County Jail, built in 1903, is located across the street from the main museum building. 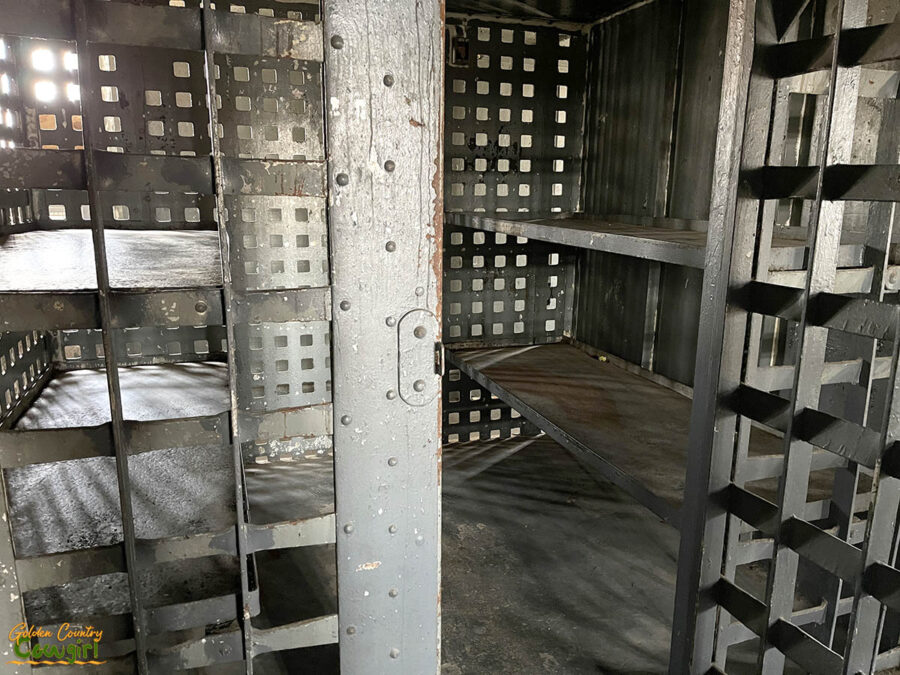 Prisoners lived four to a cell and had no privacy. 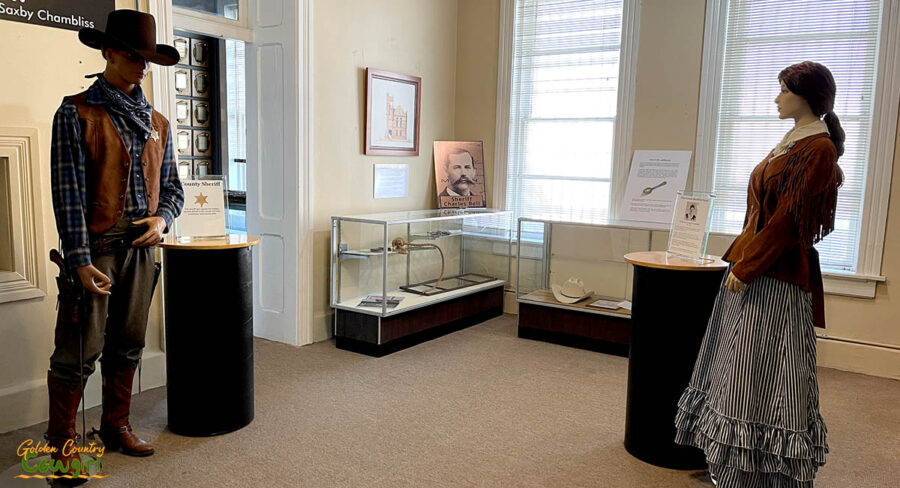 The jailer’s wife cooked for the prisoners. The large pots were pulled upstairs by rope and pulley.

The jail is built of sandstone that was hand-chiseled from the rock hills surrounding Brownwood. Mules furnished the power to move the rock onto wagons and then in to position at the jail.

The sheriff, jailer and their families lived on the first floor, the only floor with any wood in it. The upper floors were made of the 18-inch thick sandstone blocks so that the inmates could not set those floors on fire.

When the jail was built, condemned prisoners were put to death by hanging so a gallows and trap door were installed on the third floor. In 1910, hanging was outlawed and the gallows was never used.

There are so many more interesting facts and engrossing stories, but you’ll just have to visit to learn the rest!

The Martin & Frances Lehnis Railroad Museum opened Brownwood, Texas in 2007. It has more than 7,000 visitors from around the world each year. The museum houses over 20,000 objects that depict the role of Brownwood, Texas and the American Southwest in railroad and transportation history. 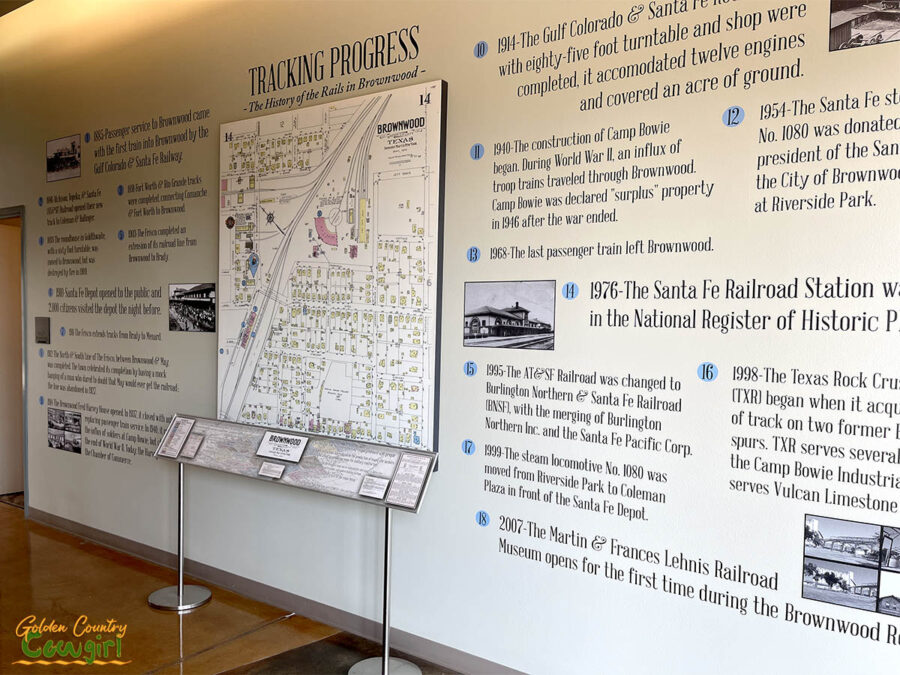 Whether you are into model trains or not, you can’t help but be impressed by the 200 square feet of working model train layouts. The first model trains were introduced in 1891. Different scales were created over the years to give greater realism through accurate to scale measurements.

Board the 1931 AT&SF caboose and see what it was like for the crew of a train. The crew slept on seats that folded out into beds and cooked their meals on the pot-bellied stove. The glassed-in upper story of the caboose served as a lookout. By the end of the 1980s, cabooses were removed from service. Longer trains and higher cargo made it impossible to see the entire train from the lookout. Today, freight trains are monitored by remote radio equipment. 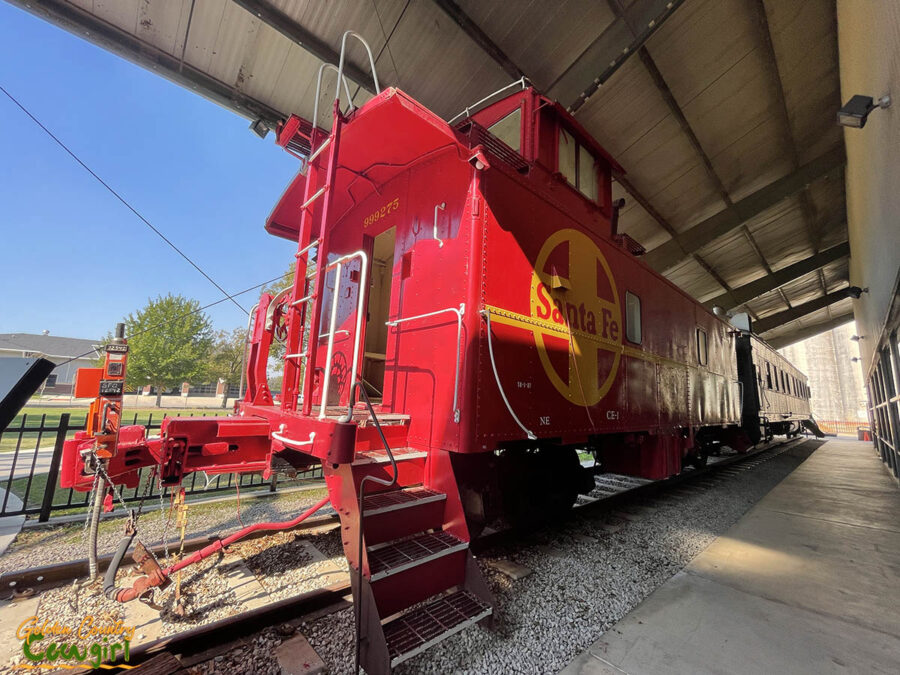 Although no longer in service, the caboose is still recognized as a symbol of the railroad industry. 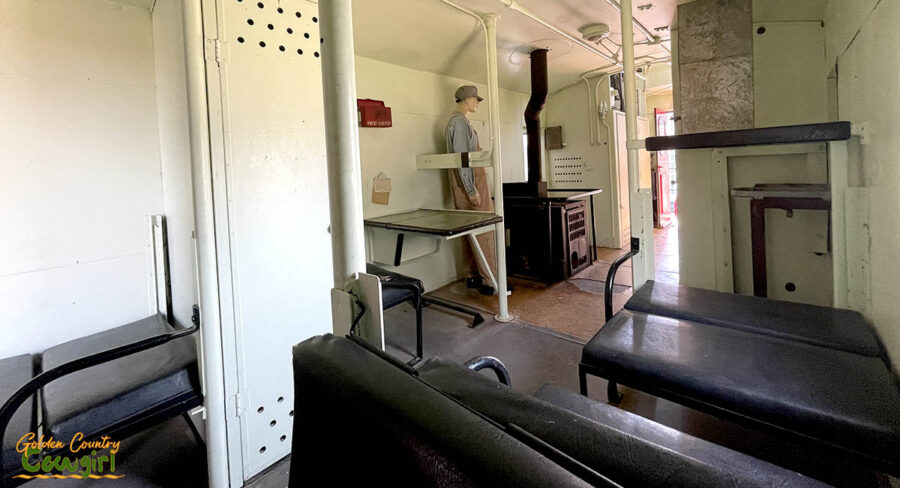 Next, explore the Pullman Superintendent’s Car, one of only 18 specially built business cars. A railroad business car was an office and hotel for the nation’s railroad executives. The all-male staff included a secretary and a porter who cooked and cleaned. These cars were the height of comfort, efficiency, power and prestige. 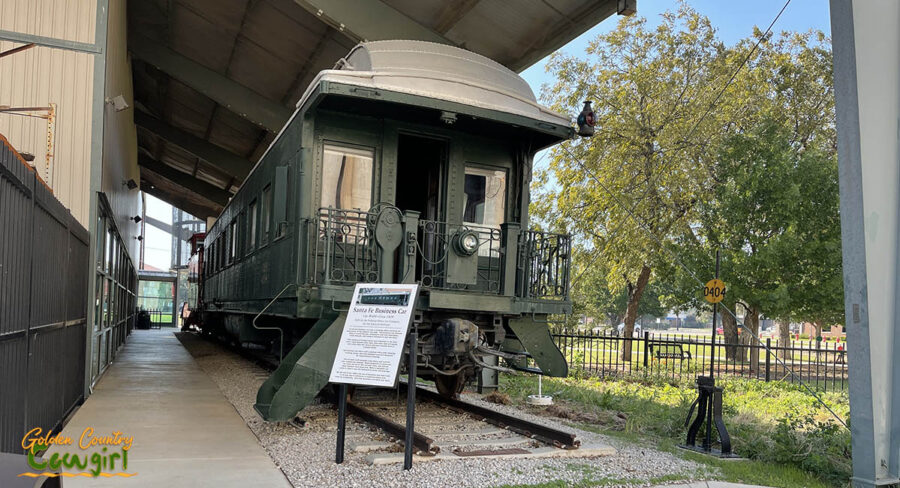 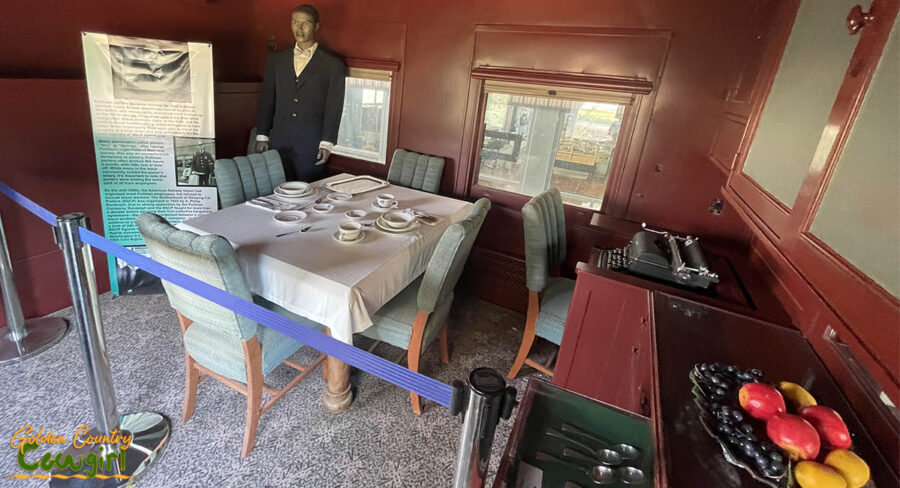 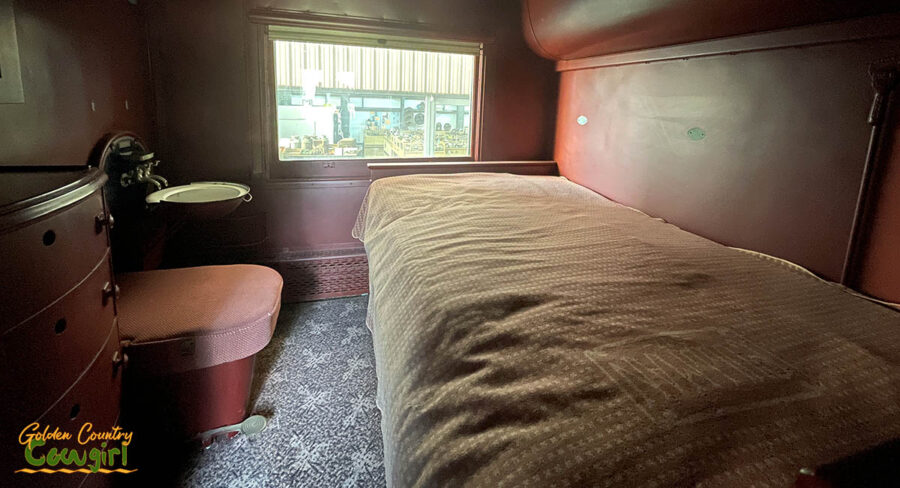 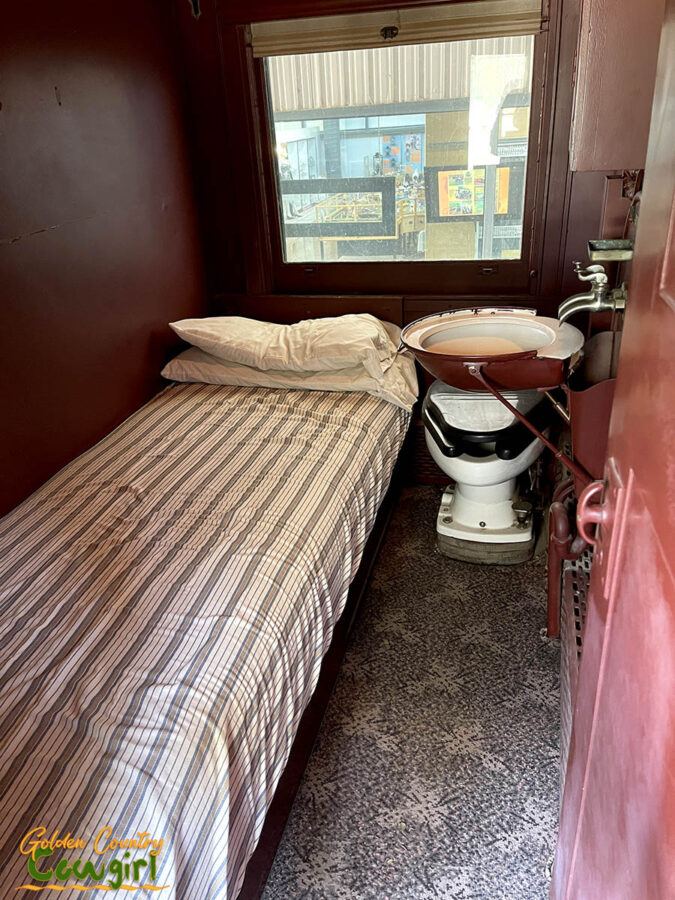 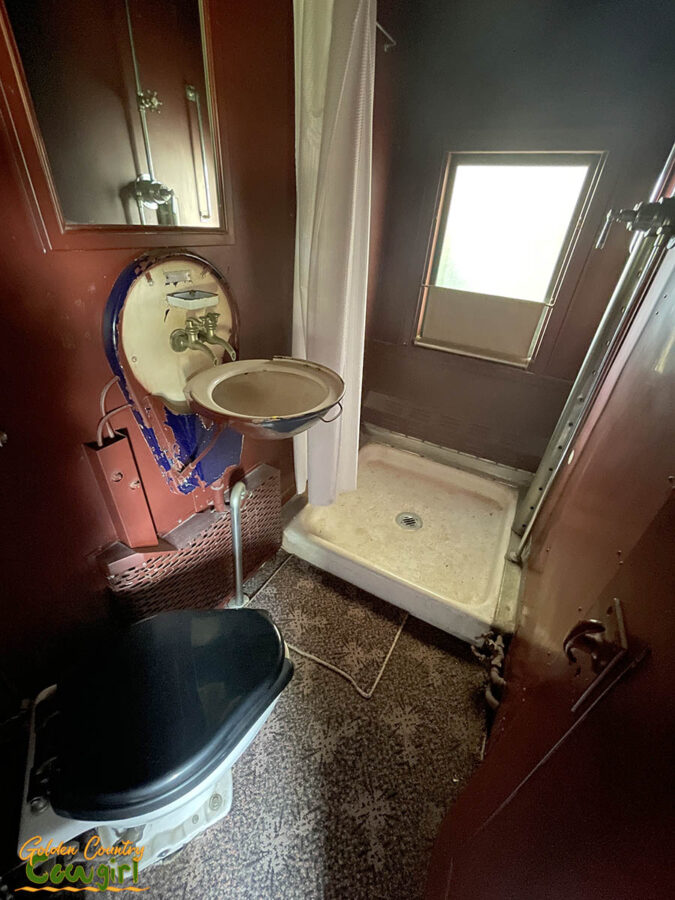 The Kress Depot was built in 1914 in the standard layout for Santa Fe stations of the era. Railroad stations were usually the first to receive any news so they were the hub of the community. 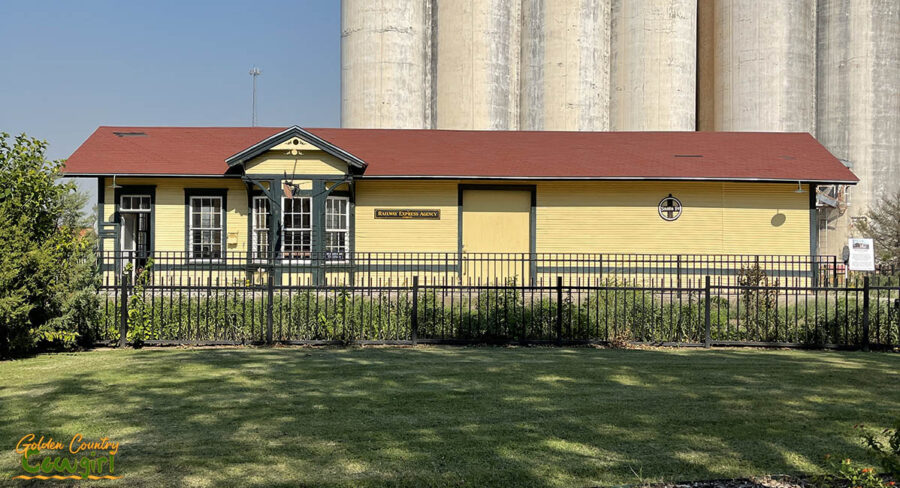 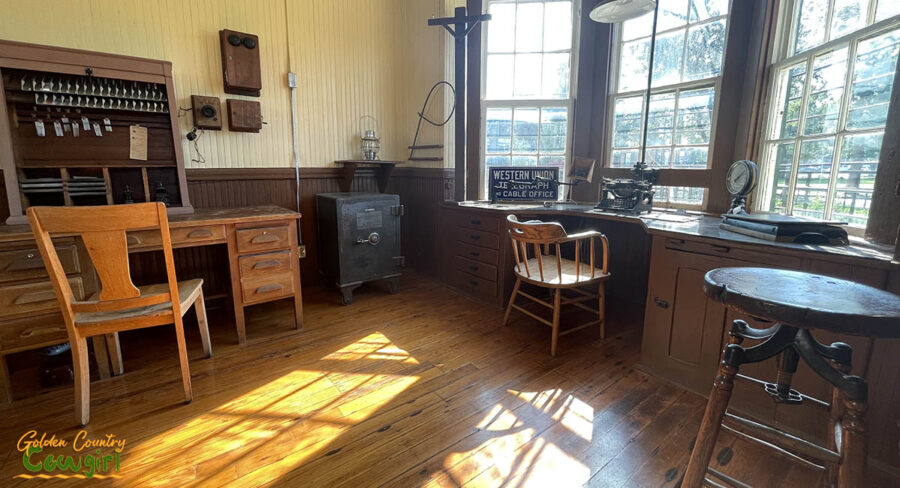 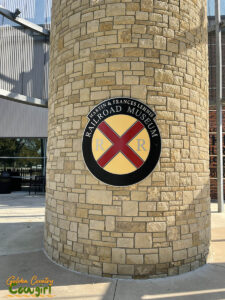 After visiting the museums, take a short drive to nearby Early and taste some Texas wine at Spirit of Texas Winery. The tasting room is rustically charming. Moira and Brian are terrific hosts so I thoroughly enjoyed visiting with Moira and learning about their wine and winery. 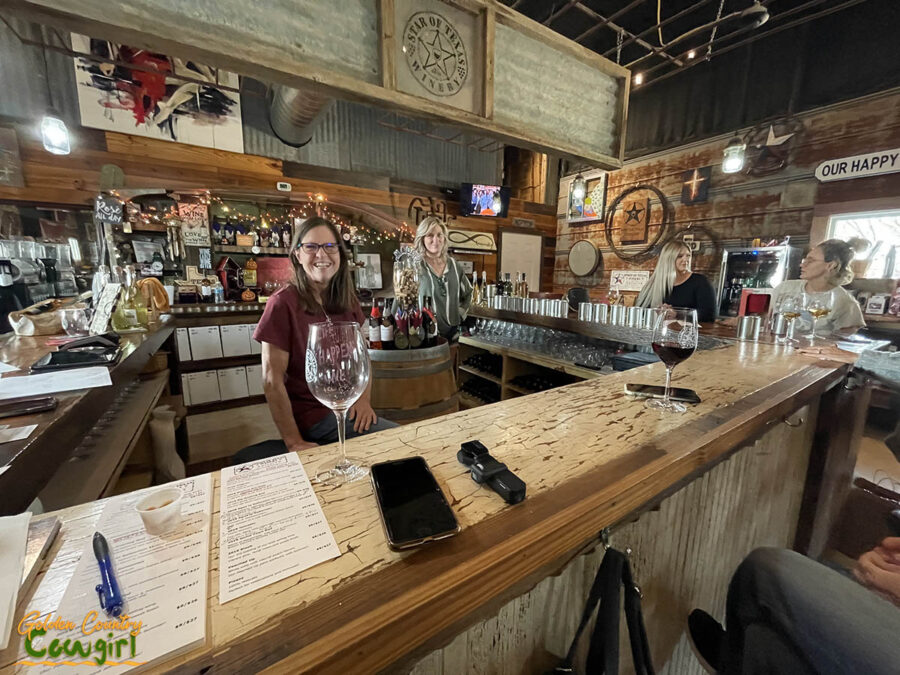 I love that the tasting room was built totally from material that was on the property. They repurposed an old barn and a wooden shed. Outside on the patio, you can play games or just relax in a rocker or swing. 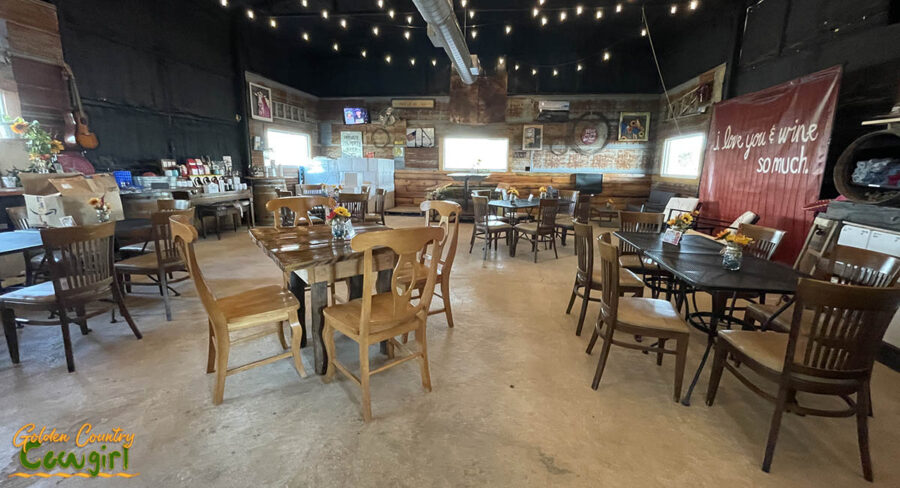 They originally wanted to call the winery Star of Texas but they had an issue with another winery. Moira said, “We didn’t know anything about trademarks and had to change it.” A friend had already made them this logo design which they continue to display in the tasting room.

They have a variety of wines from dry to sweet, both red and white, all made from 100% Texas grapes. Their wines have won many awards including some double golds.

What I purchased: 2018 Dolcetto

Spirit of Texas Winery is a member of Harvest Hosts. If you are an RVer and don’t know about this program, you need to check it out. Join by December 31st and save 20%!

The Turtle Restaurant in Brownwood, Texas

Hop back over to Brownwood for a delicious meal at The Turtle. I did my usual research to decide where to eat before deciding on The Turtle. I read several reviews and had to chuckle at the ones that complained about having to wait a long time to get their food. What did they expect from a restaurant named turtle with a slogan of “Slow, Fresh Food?”

I prefer to eat early so I made my reservation for 5 o’clock when they open. They had a cute table in the bar by a window ready for me. 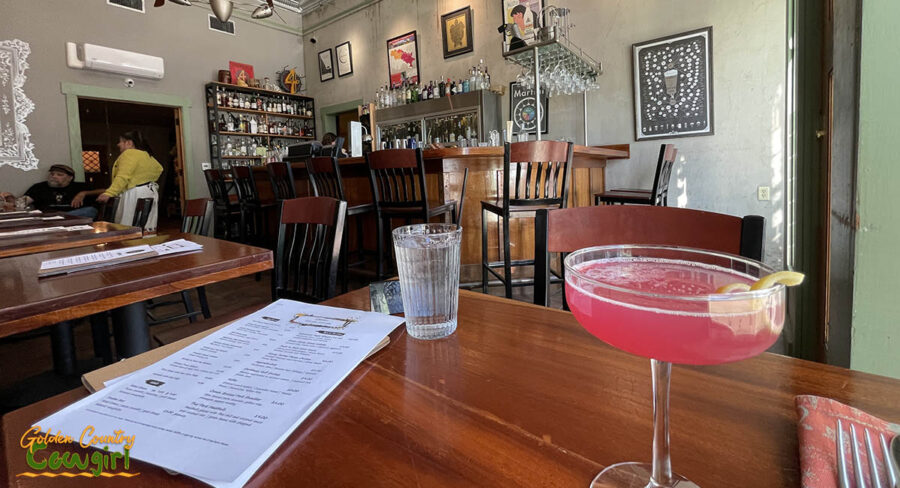 My server was super and the food was top notch, making for a very enjoyable meal. I had pot stickers for an appetizer, duck for my main course and creme brulee for dessert. I didn’t notice my food taking particularly long but perhaps it was because I was there early and there were only a few other patrons. At any rate, I don’t like to be rushed when I eat out so it was perfect for me. 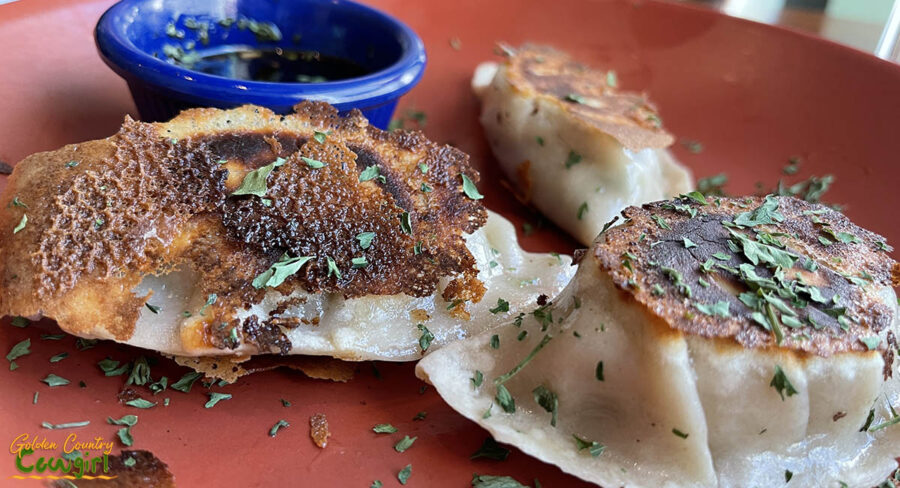 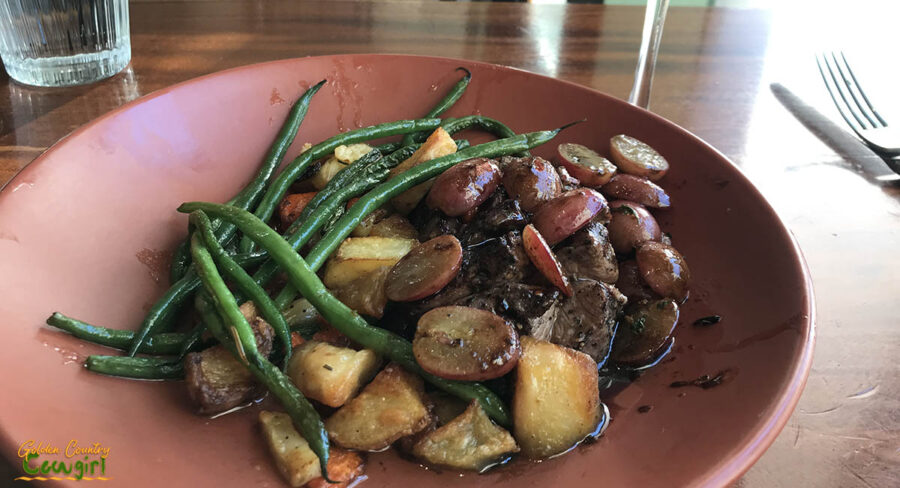 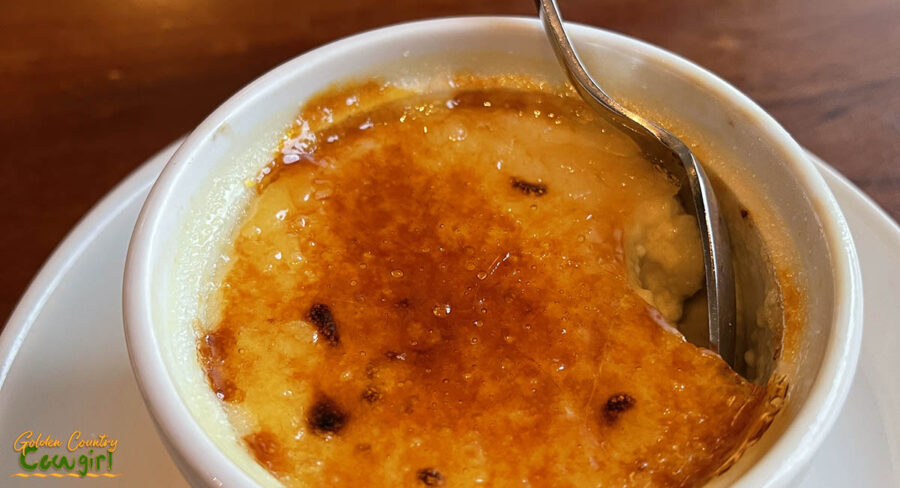 Other Places of Interest in Brownwood, Texas

Unfortunately, I didn’t know about the murals until after I left. I definitely would have spent some time checking out the artwork if I had known about them while I was visiting the best places in Brownwood, Texas.

I hope you enjoyed reading about my visit to some of the bests places in Brownwood, Texas. To sum up, I had an extremely pleasant day in Brownwood with lots of variety. The only thing I would have tried to add is a visit to the murals.

Have you been to Brownwood, Texas? Did I miss any of your favorite places to visit? I’d love to hear from you in the comments. 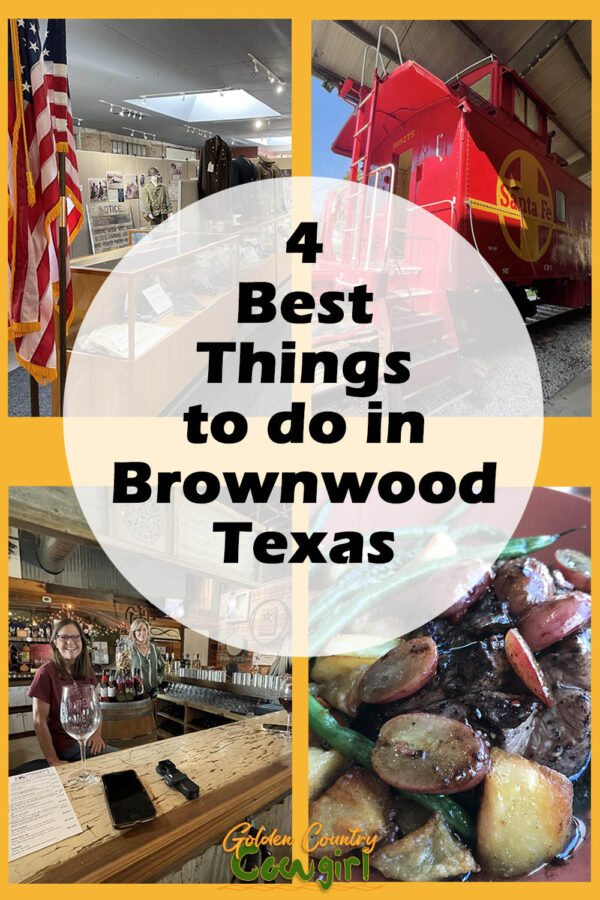 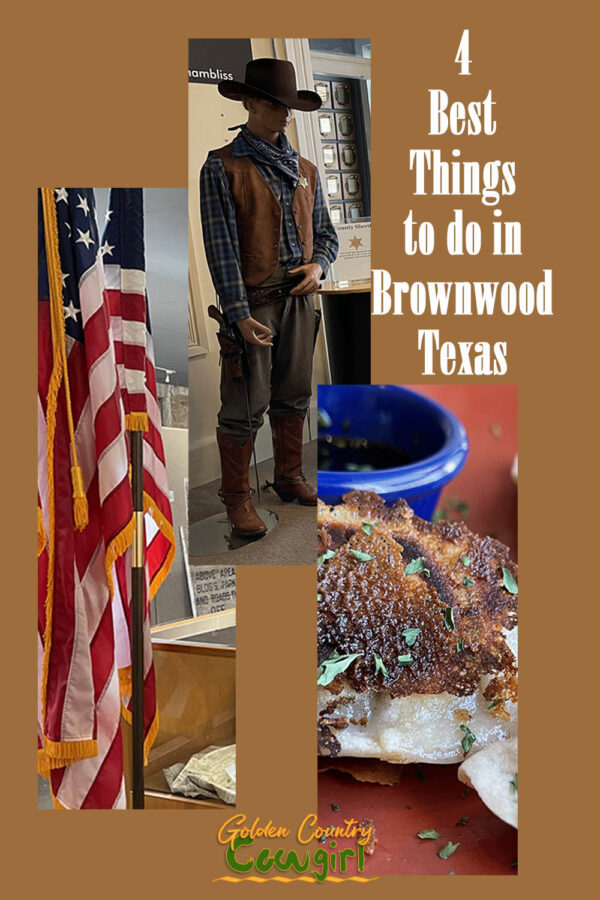