Although the 16.1-acre Old Tunnel State Park in Fredericksburg is the smallest state park in Texas, it serves a very important function. There’s no camping and only limited hiking. It’s main function is to protect and preserve the colony of up to 3 million Mexican free-tailed bats and 3,000 cave myotis bats that live in the old railroad tunnel. 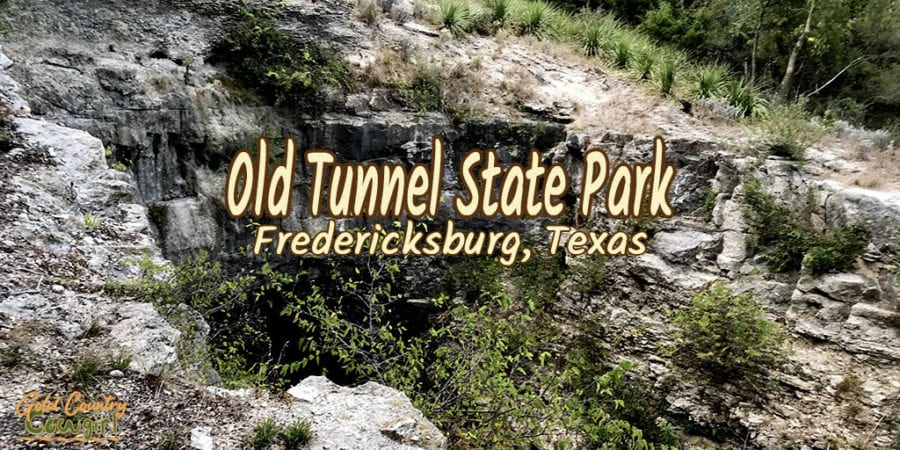 Over 100 years ago, on August 16, 1913, the first train steamed it’s way through the Old Tunnel. The farmers of Fredericksburg wanted a faster method to get their goods to market and were looking to the railroad. The businessmen of Fredericksburg were disappointed when a spur was built only as far as Kerrville so they decided to take matters into their own hands. They began raising capital and in 1913, the San Antonio, Fredericksburg and Northern Railway Company was chartered. It took only two months to build the line, including the 920-food tunnel, but the cost of building sent the company into receivership in 1914.

The railway was deeded over to the Fredericksburg and Northern Railway Company under a foreclosure sale. They continued to operate until World War II but never turned enough of a profit to pay off the original debt. Operation of the railroad ceased in 1942 and the track was sold for scrap.

The Texas Parks and Wildlife Department purchased the 16 acres in 1991 to operate as a wildlife management area. The property was transferred to the State Parks Division in 2011 to become a state park, which became official in 2012. 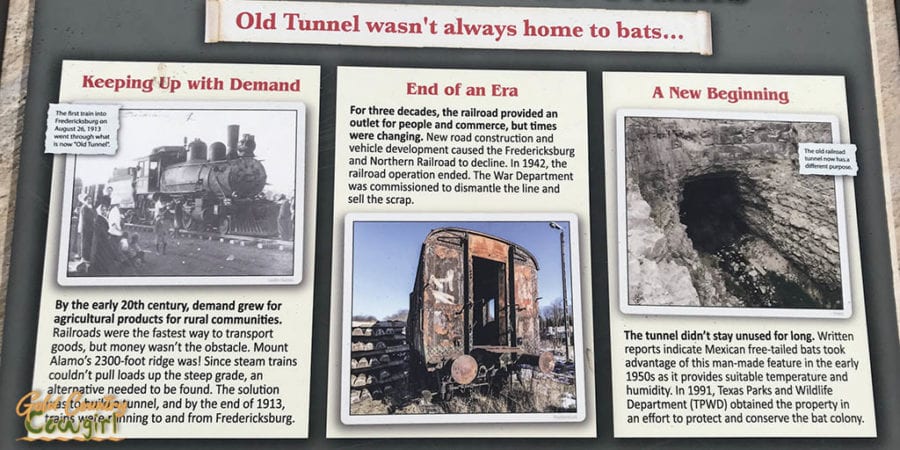 Old Tunnel State Park is located about 10 miles down scenic rural roads off highway 87 or 290.

Old Tunnel State Park protects the colony of up to 3 million Mexican free-tailed bats and 3,000 cave myotis bats that live in the railroad tunnel. Click To Tweet

I was so happy when I realized I would be in Fredericksburg in time to witness the bat emergence at Old Tunnel. It’s one of the few things I had penned (not just penciled) in to see while I was there. I’ve always been interested in bats. In fact, we built and placed bat houses at our property in Nevada when I lived there.

You can see this fascinating sight every night from May through October when the bats emerge around sunset. Check for times on the Texas State Parks website since sunset changes as the length of day changes.

You can see this fascinating sight every night from May through October when the #bats emerge around sunset. Click To Tweet

There are two seating options. The top deck is free of charge and has room for 250 viewers. 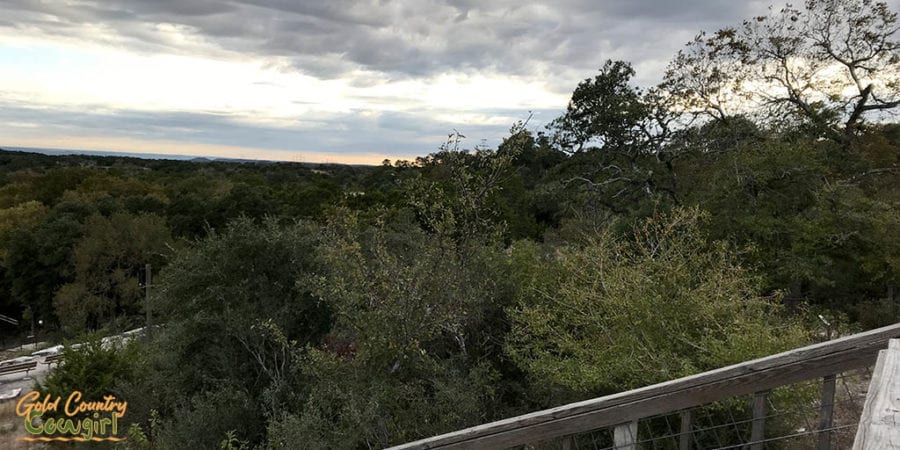 View from the upper viewing deck 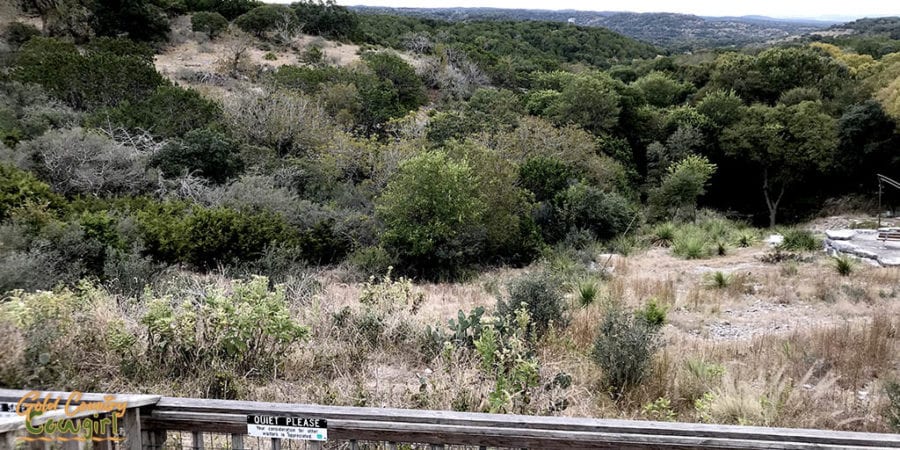 Another view from the upper viewing deck

If you want to view the emergence from the lower deck and hear the informative program beforehand, the fee is $5 and is limited to 70 people. Be sure to bring cash and the correct change. The view of the bats is supposed to be much better from this location. Tickets for the lower deck go on sale about 90 minutes before the expected emergence and the program starts about an hour beforehand. Again, these times are available on the website.

You can check out some interesting displays while you are waiting. 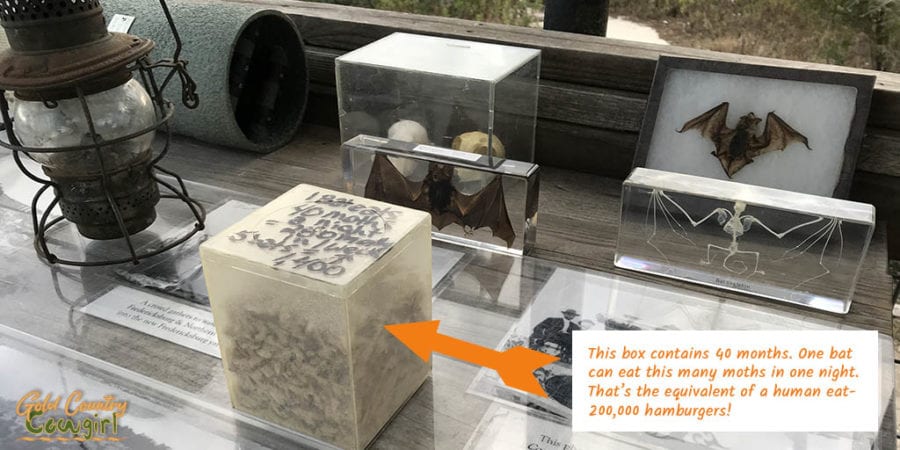 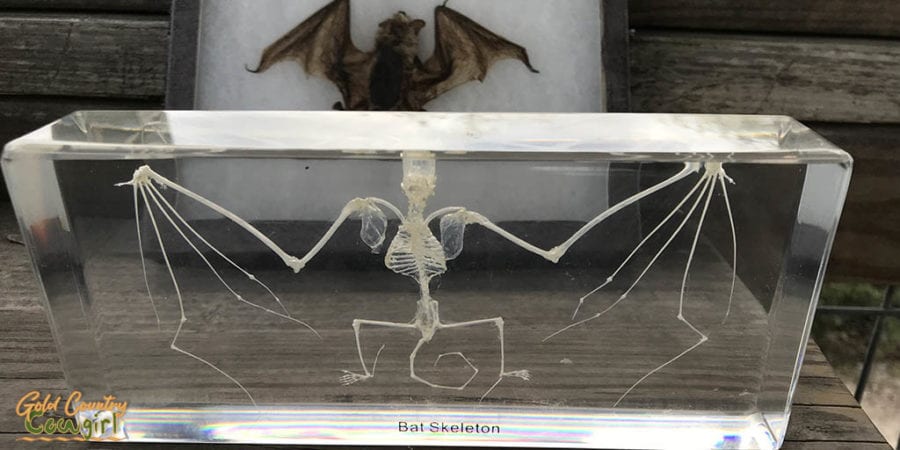 While I was waiting, families with children kept arriving. Noise is an issue with the bats and the children were definitely not being quiet. The docent explained to them how important it was to be quiet and I was amazed during the emergence just how silent they were. The only sounds you heard were the clicking of camera shutters and the wings of the bats.

This was truly a worthwhile experience and I highly recommend it. Even though it was late in the season and some of the bats had already started to migrate to Mexico, there was an amazing display.

My photo equipment was definitely not up to the task of photographing so much movement in the low light so I only took video. The video gives you just an inkling of what it was like sitting there in complete silence with hundreds, thousands, of bats whizzing around and above your head. Near the end of the video, you can hear them as the numbers increased.

It will be dark on your way out so be especially vigilant for wildlife. I saw dozens of deer along the road on my drive back to my RV park.

There are three main reasons that you should respect and protect bats.

First, bats eat tons of insects annually, allowing farmers to use less pesticide. Scientists estimate that bats reduce crop damage and pesticide use in the United States by nearly 4 billion dollars a year.

Scientists estimate that #bats reduce crop damage and pesticide use in the United States by nearly 4 billion dollars a year. Click To Tweet

Second, many bats are pollinators. Commercial products like bananas, peaches and agave depend on bats for pollination.

Third, some bats eat fruit and disperse the seeds. Bats disperse seeds into clear-cut forests and up to 95% of new growth can be attributed to them.

If you want to learn more about bats, my favorite source is Bat Conservation International. 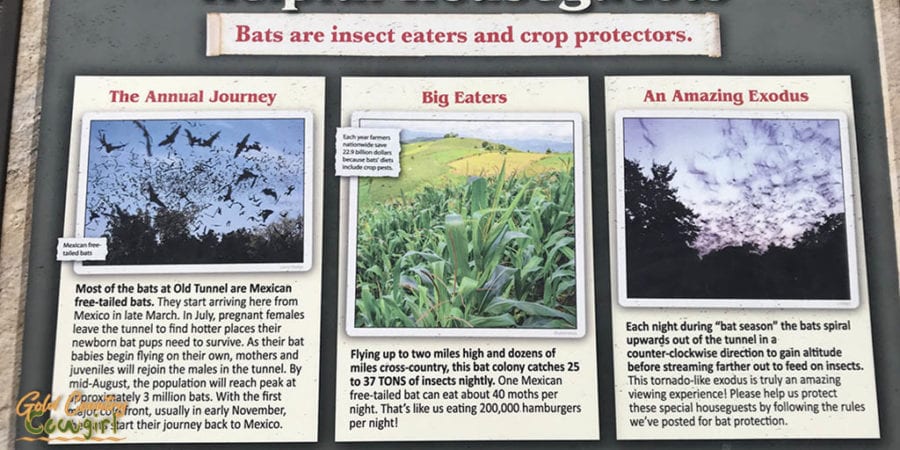 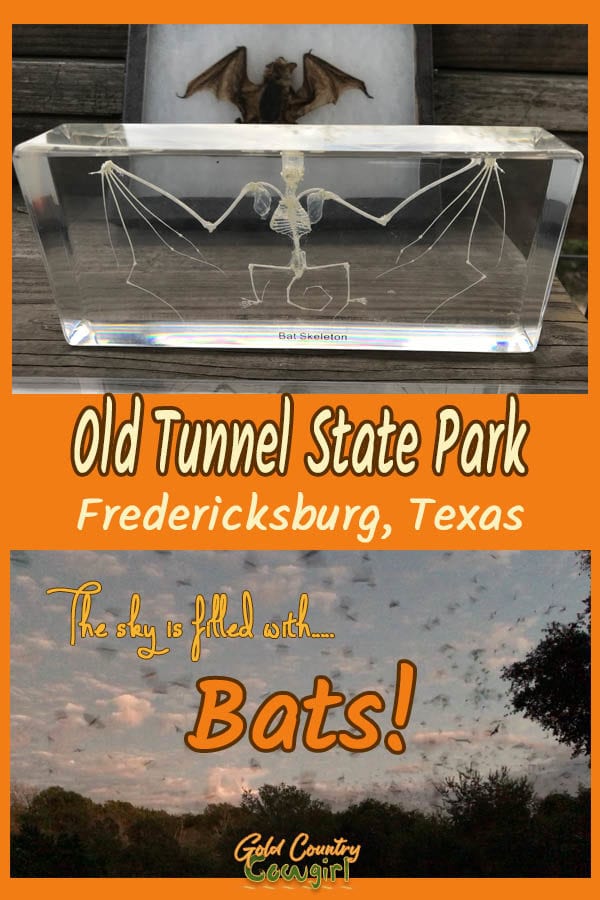 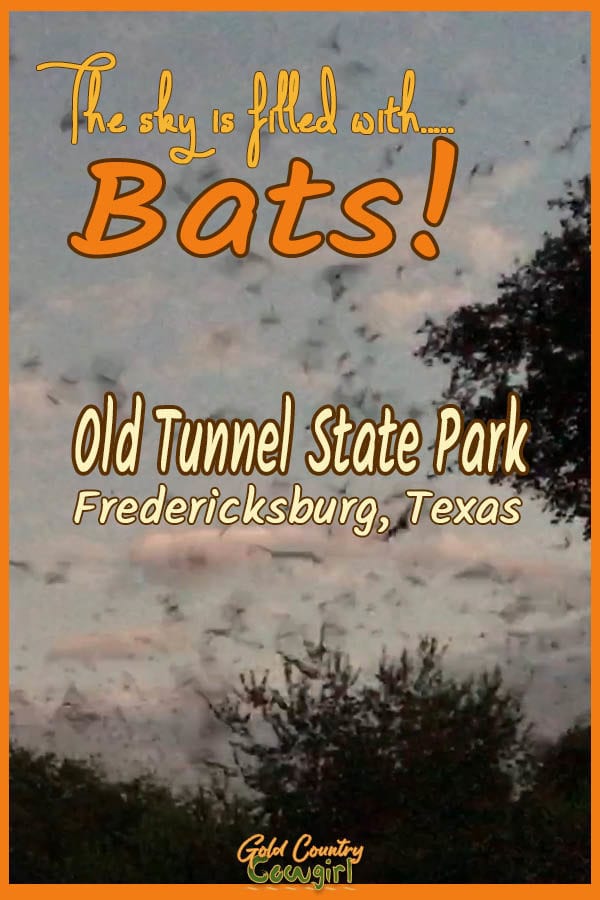 Have you ever witnessed a bat emergence? I really want to go to the one at Bracken Cave near San Antonio now since it is the largest concentration of bats on earth. It will definitely be on my spring bucket list.